Accessibility links
People Have Been Fighting Over Transgender Access To Bathrooms For Years New Hampshire was the site of one of the first legislative battle grounds over transgender rights. 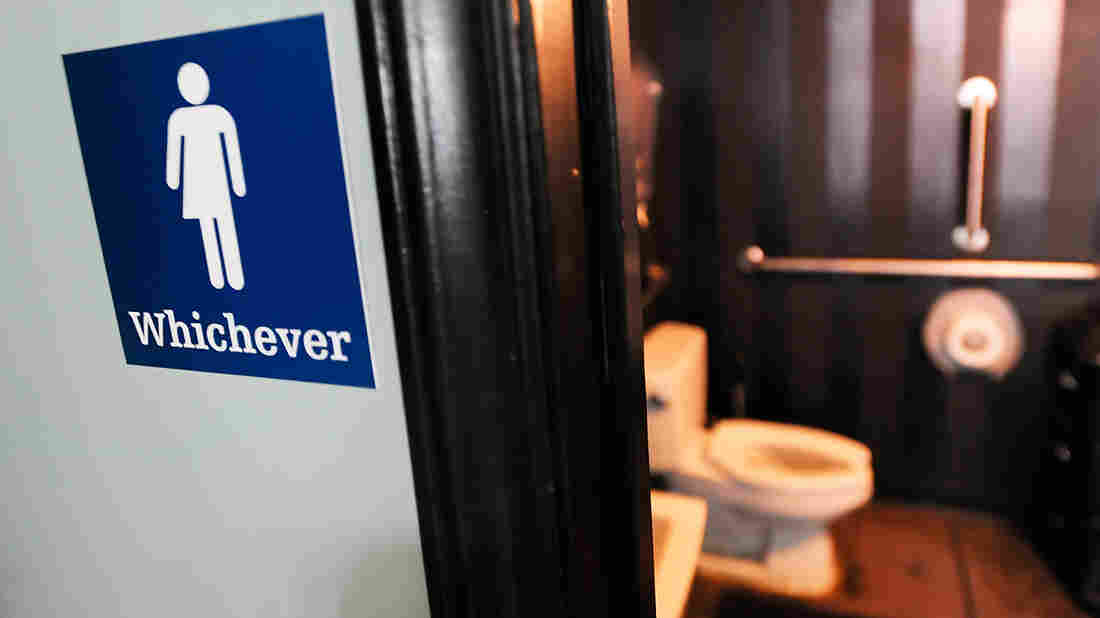 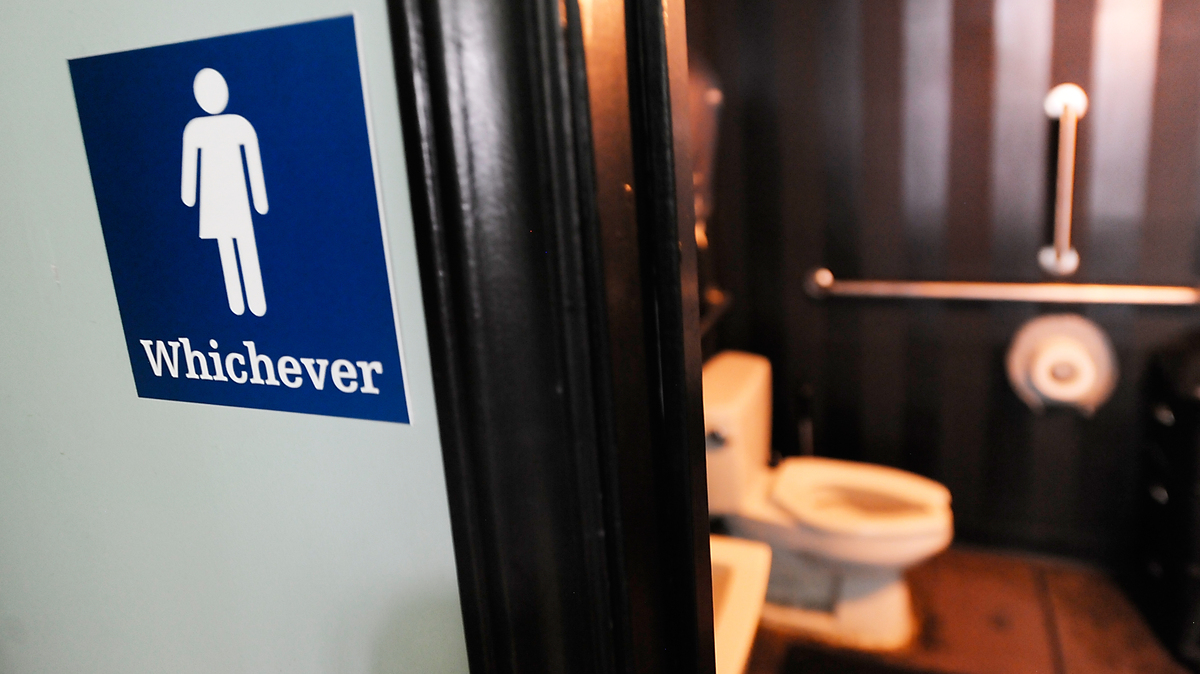 A gender neutral sign is posted outside a bathrooms at Oval Park Grill in Durham, North Carolina.

The debate over bathrooms and who should use them picked up steam after North Carolina's recent law requiring people to use bathrooms that correspond to the sex on their birth certificate. But the debate started years before North Carolina took it up.

One of the first battles was in New Hampshire in 2009 and started out as, "a really very simple extension of nondiscrimination protection to a class that isn't covered and needs to be covered," said state Rep. Ed Butler, a Democrat.

In 2009, he proposed the state expand its anti-discrimination laws to include gender identity and expression to address transgender citizens' concerns about housing, employment, even physical safety.

The debate didn't play out the way he expected.

Butler's legislation quickly became dubbed "the bathroom bill" by socially conservative opponents such as Ann Marie Banfield, who characterized the backlash in terms of privacy.

"When you're talking about opening up restrooms and schools and in public places, it is just uncomfortable, unnatural and unwelcoming to many, many women and girls out there and I think that's what this really boils down to," said Banfield.

Bathrooms have been a regular site of political conflict around gender and sexuality issues, said Amy Stone, an associate professor of sociology and anthropology at Trinity University in Texas who studies political rhetoric.

A year earlier in Colorado, socially conservative groups such as Focus on the Family used similar language in an unsuccessful attempt to halt a similar transgender rights bill.

"Very few would argue that they'd want a man in a girls' bathroom, right? So it becomes very hard to counter them," said Stone, who noted that some of the same language was used by opponents of gay rights in the 1970s.

In New Hampshire, Stone said the opponents' framing of the issue became a powerful shorthand in the debate about the transgender rights bill.

News outlets in New Hampshire media began using the phrase "bathroom bill" in their coverage of the bill, which focused the debate even further on bathrooms.

The more the debate focused on bathrooms, the more contentious it got. During the debate on the floor of the New Hampshire House, then-state Rep. Nancy Elliot, a Republican, claimed child molesters would be able to choose their gender identity and and prey on small children in restrooms.

"You couldn't say anything to them," charged Elliot. "If you did say something to this person, you could be accused of a hate crime."

Supporters of the bill tried to push back against the rhetoric, noting that the bill permitted no such thing.

"I'm tired of being called a child molester, because I'm not. I've never met a transgender person who is or have been. And I know that if I was in a bathroom and some pervert came in, he would be sorry about it," said Gerri Cannon, a transgender woman who met with lawmakers every day to keep the bill moving forward.

The state House eventually passed the bill by a single vote, but the tide was turning and a month later the state Senate voted unanimously to kill the bill.

LGBT supporters put the blame squarely on the rhetoric over bathrooms and the media.

"To those among you who repeatedly used the label 'the bathroom bill,' who incorporated this into every headline and story lead and failed to tell the whole and complete truth of this legislation, I say you are not journalists. You have served merely as stenographers to ignorance, hatred and discrimination," said then-state Sen. Jackie Cilley.

The bill's original sponsor, Ed Butler, notes that while the focus on bathrooms certainly didn't help his bill, it wasn't the only factor in its defeat. New Hampshire lawmakers were also passing a marriage equality law at the time. For some, Butler said, also passing a transgender rights bill as well was too much, too soon.

The environment for LGBT rights in New Hampshire has changed in the intervening years, said Butler. The LGBT community is more visible and better organized, and public attitudes are changing about transgender people.

"I think people are finally realizing the absurdity of the argument. We have been going to the bathroom with transgender people for all of our lives, it hasn't been a problem, and I think people are starting to realize that," said Butler.

That said, Butler notes there has been no recent attempt to add gender identity to New Hampshire's anti-discrimination law.