Accessibility links
Long A Symbol, Stonewall Inn May Soon Become Monument To LGBT Rights President Obama may use his executive authority to declare the site of the Stonewall riots in New York City as the first national monument dedicated to the struggle for LGBT rights. 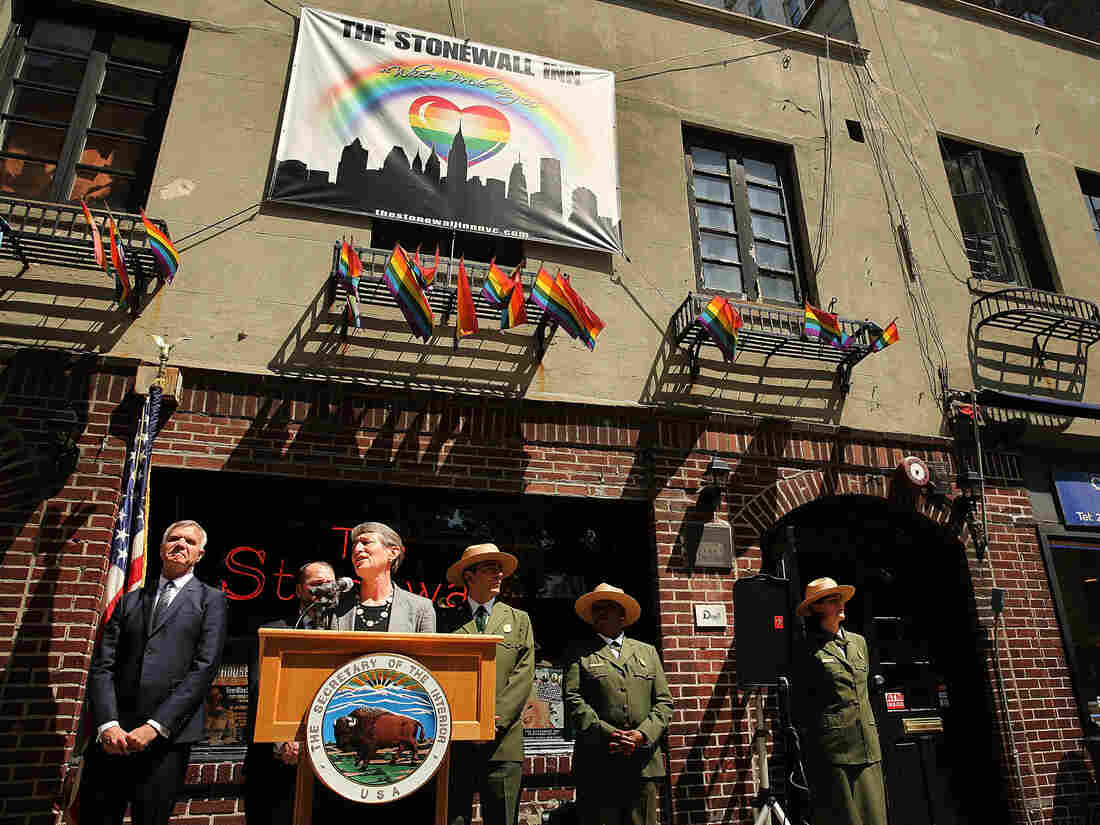 Secretary of the Interior Sally Jewell speaks in front of the Stonewall Inn in 2014 to announce a National Park Service initiative to identify historic sites related to the struggle for LGBT rights. Spencer Platt/Getty Images hide caption 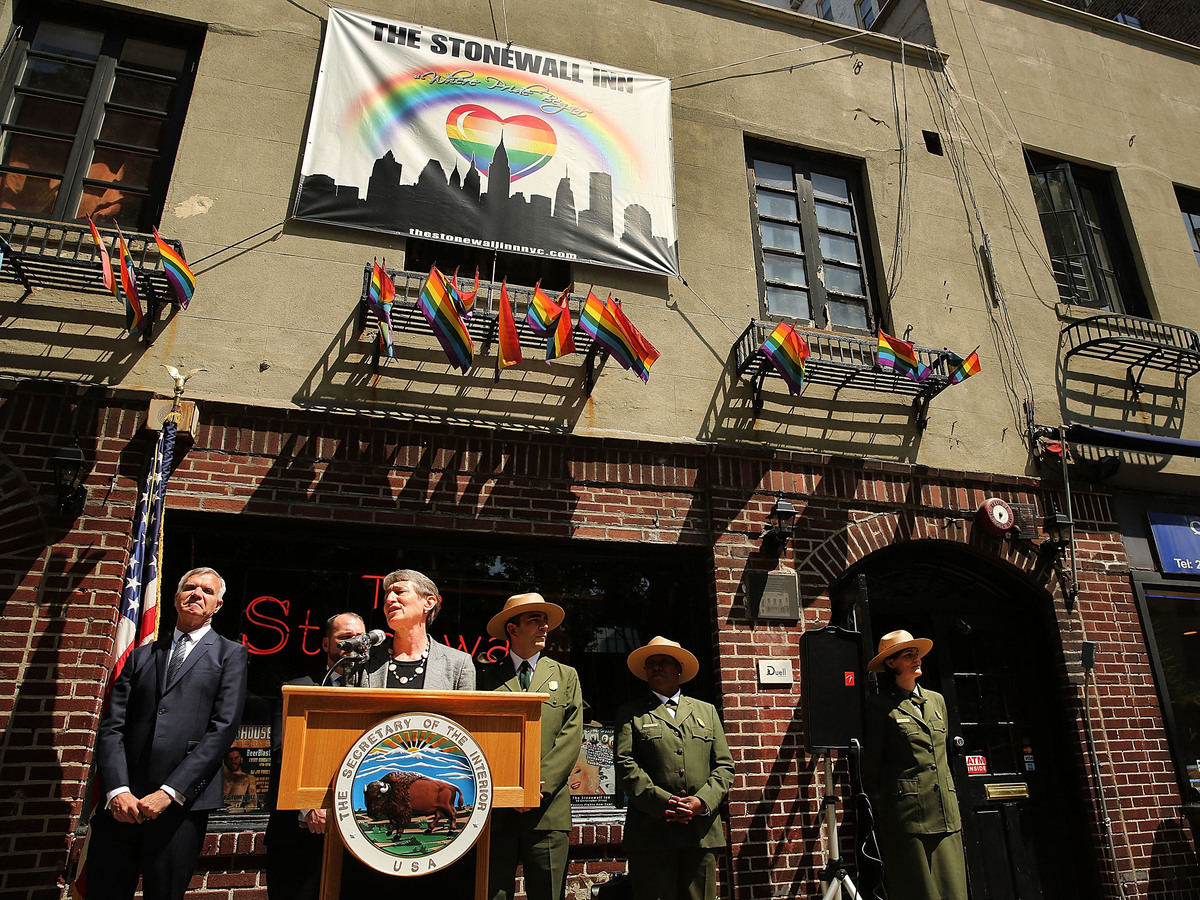 Secretary of the Interior Sally Jewell speaks in front of the Stonewall Inn in 2014 to announce a National Park Service initiative to identify historic sites related to the struggle for LGBT rights.

The Obama administration is taking steps to name the first national monument dedicated to the struggle for lesbian, gay, bisexual and transgender rights.

A likely location is in New York City, where the Stonewall riots sparked the modern gay-rights movement almost a half-century ago.

"It sounded like screaming and real cries of agony and desperation finally being released," recalls Martin Boyce, 68, who participated in the riots in the early hours of June 28, 1969.

On that hot and humid night in New York's West Village neighborhood, Boyce walked over to a gay bar called the Stonewall Inn after he heard that a police raid was underway. He says he expected to see a routine scene. 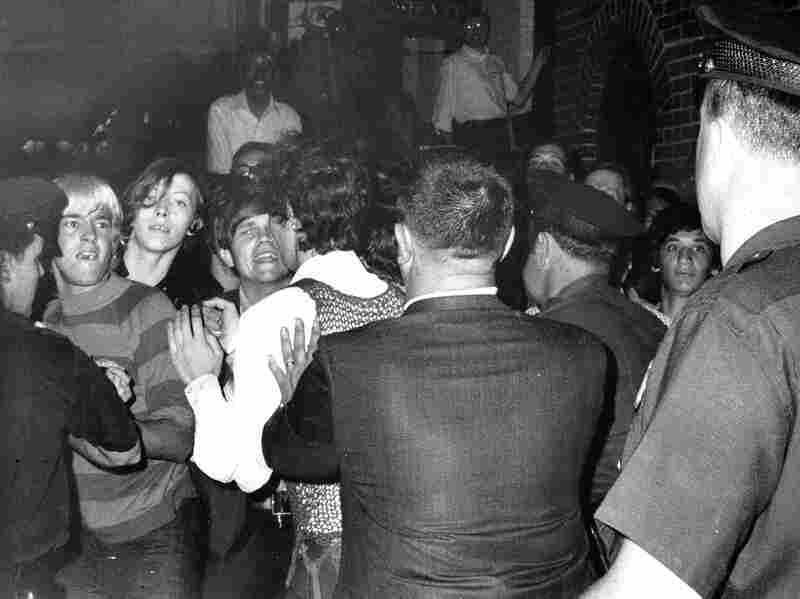 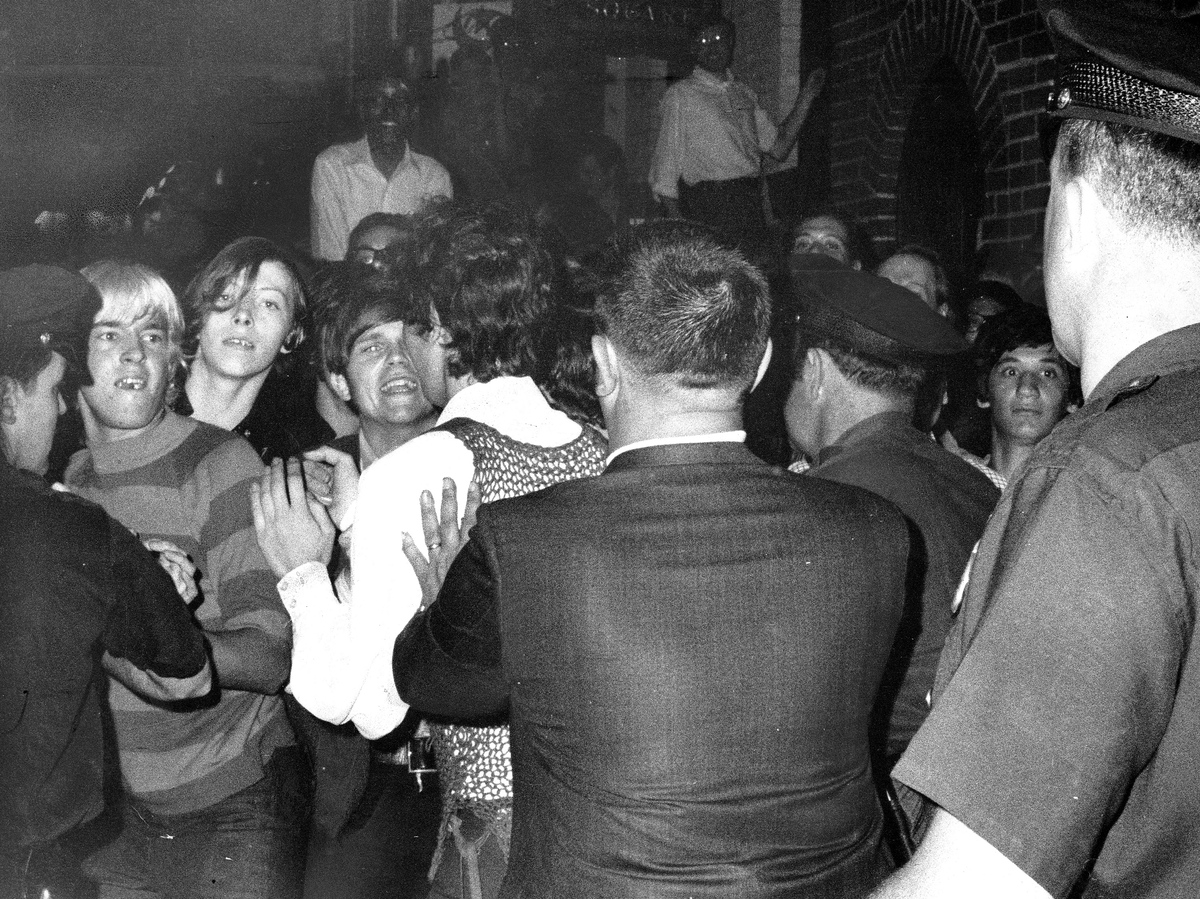 A crowd attempts to impede police arrests outside the Stonewall Inn in New York City on June 28, 1969.

"What we used to normally do at the time was look at the raid, see people coming out, who got arrested, and be glad it wasn't you," he says.

New York's LGBT community had already endured years of police raids on gay bars and beatings on the street. There were regular arrests for homosexual acts or for not wearing at least three pieces of clothing that police considered appropriate for a person's sex.

Hundreds of bar patrons and onlookers, including Boyce, fought back against the raid with glass bottles, loose cobblestones and burning trash, launching violent protests in New York City that continued on and off for days.

The Stonewall riots were not the first attempt to push for equal treatment of the LGBT community, but it became an important rallying cry that fueled the gay-rights movement and is now commemorated every year during LGBT Pride Month.

"It managed to capture the imagination of a whole new generation. It used the tactics not of people picketing in suits and ties, but people demanding their rights in loud voices as had never happened before," says Lillian Faderman, a scholar of LGBT history. 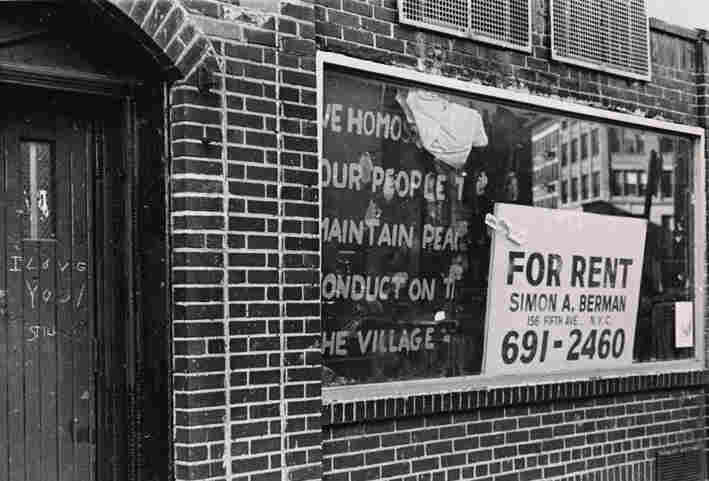 A "for rent" sign appeared in the window of the original Stonewall Inn bar months after the riots in 1969. Diana Davies/The New York Public Library hide caption

Housed in two brick buildings, the original Stonewall Inn bar closed months after the riots. The rotation of businesses that took over the space includes a men's clothing store, a bagel shop and the Szechuan Cottage Restaurant.

Before it became a gay bar in 1967, the buildings were once occupied by Bonnie's Stone Wall, a Prohibition-era tearoom that opened in 1930 and later became a restaurant known as Bonnie's Stonewall Inn. According to David Carter's Stonewall: The Riots That Sparked The Gay Revolution, the tearoom's name was likely a reference to Mary Casal's The Stone Wall, a book about lesbian love.

Originally built as horse stables in the 1840s, the buildings are now home to a nail salon and, next door, a new Stonewall Inn bar that's been serving drinks to both tourists and locals since 2007.

"I come here because I want to make sure the Stonewall is never going to go out of business because it's important to our history," says Rick Mark, 28, who says he's been stopping by the bar every few weeks since he moved to New York from Seattle a few months ago.

The buildings have already been named a historic landmark by New York City and the federal government. Now, momentum is growing for a national monument.

A bill in Congress would designate the Stonewall Inn and the area around it as part of the National Park Service. The Rev. Franklin Graham — Billy Graham's son and an evangelical Christian leader — has criticized such a proposal for creating a "monument to sin." 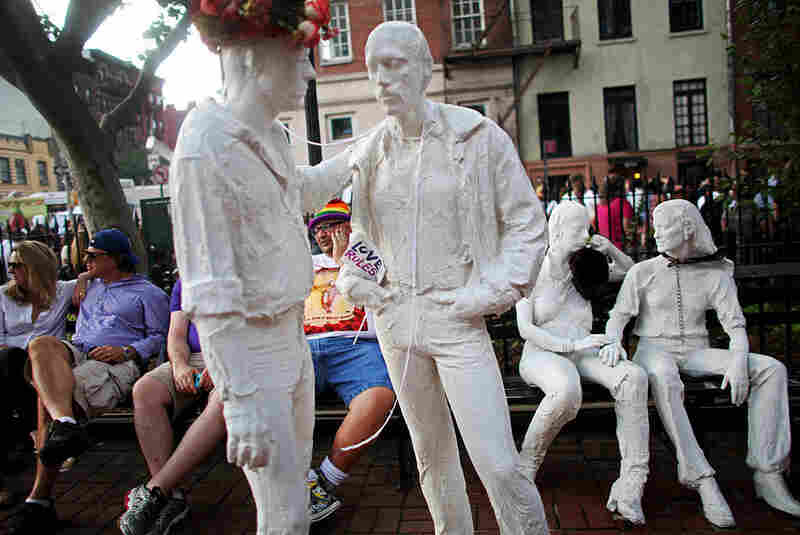 After much controversy, George Segal's sculpture "Gay Liberation" was installed in Christopher Park, located across the street from the Stonewall Inn. A crowd gathered at the site in 2015 to celebrate the U.S. Supreme Court decision legalizing same-sex marriage. Yana Paskova/Getty Images hide caption 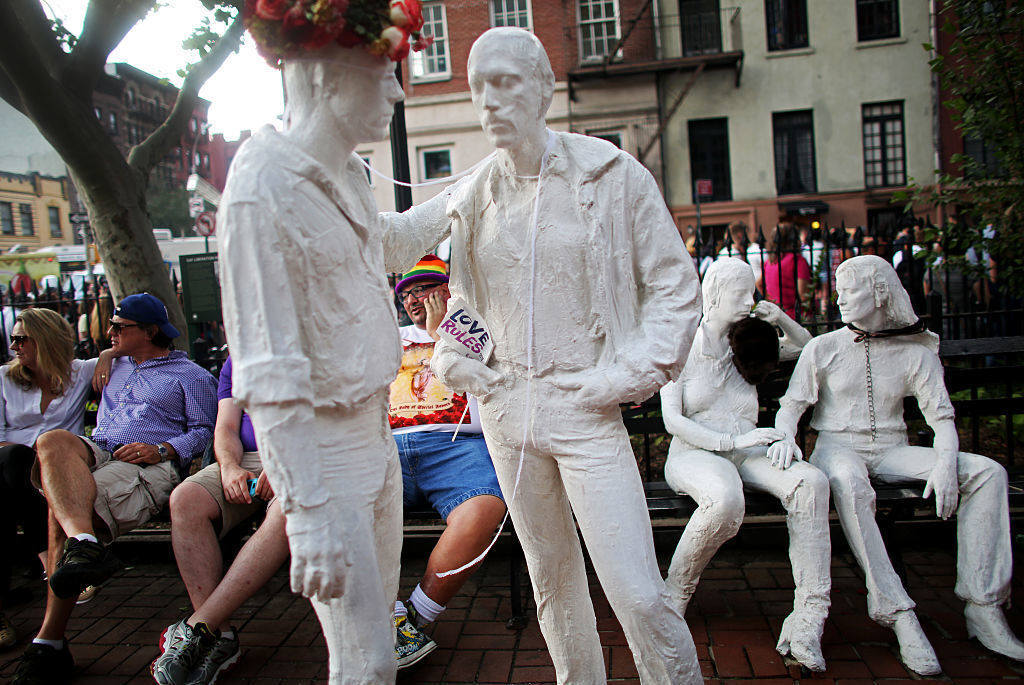 After much controversy, George Segal's sculpture "Gay Liberation" was installed in Christopher Park, located across the street from the Stonewall Inn. A crowd gathered at the site in 2015 to celebrate the U.S. Supreme Court decision legalizing same-sex marriage.

But at a recent public meeting in Manhattan, dozens lined up in a school auditorium blocks away from the Stonewall Inn to voice their support for the proposal in front of Obama administration officials seated on stage.

Several meeting attendees expressed concerns about how the history of Stonewall has been retold and who is acknowledged to have been part of the riots. Melissa Sklarz, a transgender woman, highlighted the role of transgender activists during the Stonewall riots, which, she said, some have overlooked in past remembrances of the event.

"Those that had seats at the table made sure that their voices were heard and their faces were seen," she said.

Previous attempts at memorializing Stonewall with plaques and statues have been criticized for not explicitly acknowledging transgender people and people of color. For Faderman, author of The Gay Revolution, this is part of a debate that has always tested the unity of the LGBT umbrella.

"There's no doubt that Stonewall is a symbol for the entire LGBT movement," says Faderman, citing photos taken on the first night of the riots that show a crowd that was mixed in terms of race and gender identity.

But she adds that there are many details we may never know for sure, like who exactly was in the crowd and who started the rioting. And that leaves a lot of room for different versions of Stonewall's history.

"There are all sorts of mysteries still shrouded in Stonewall," she says. "I think most of the people who were there are no longer with us. So they can't clear the mysteries up for us."

It's also unclear when a national monument at the site of the Stonewall riots will be officially announced. But even if Congress doesn't act, plans for the monument can still move forward.

New York Gov. Andrew Cuomo signed a state law in April that will allow the city park outside the Stonewall Inn to become federal land. That means President Obama could use his executive authority under the Antiquities Act to declare the land a historic site just in time for Pride Month next month.