Accessibility links
A Modern 'Roots' For An American Society Still 'Based On The Color Line' The remake of the seminal TV miniseries begins on the History channel this week. Co-producer LeVar Burton says he recognized an opportunity to retell the story "to and for a new generation." 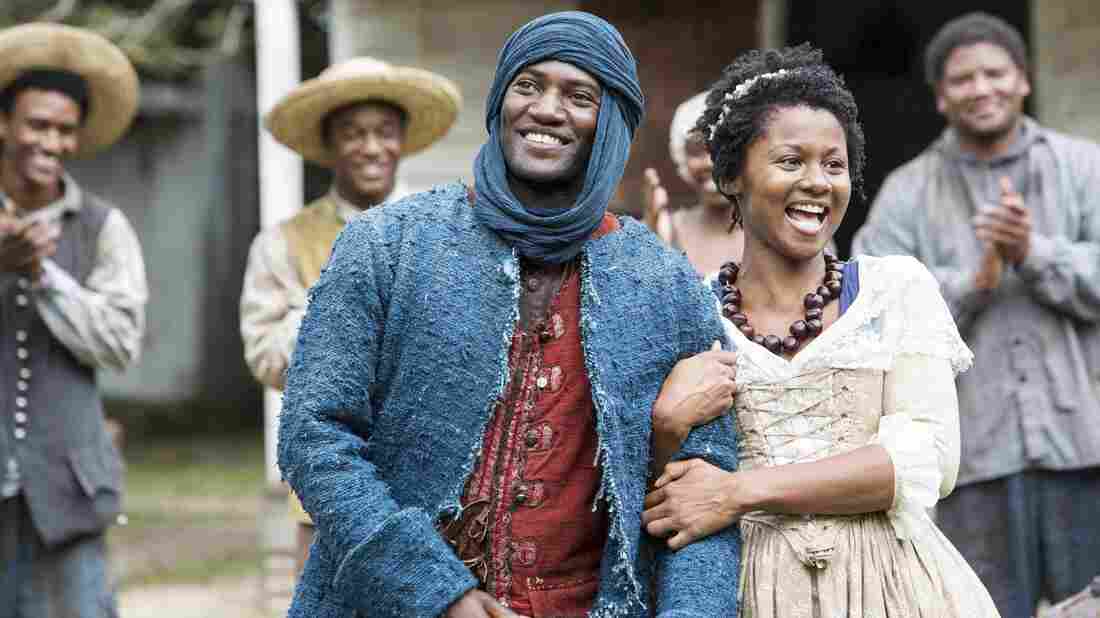 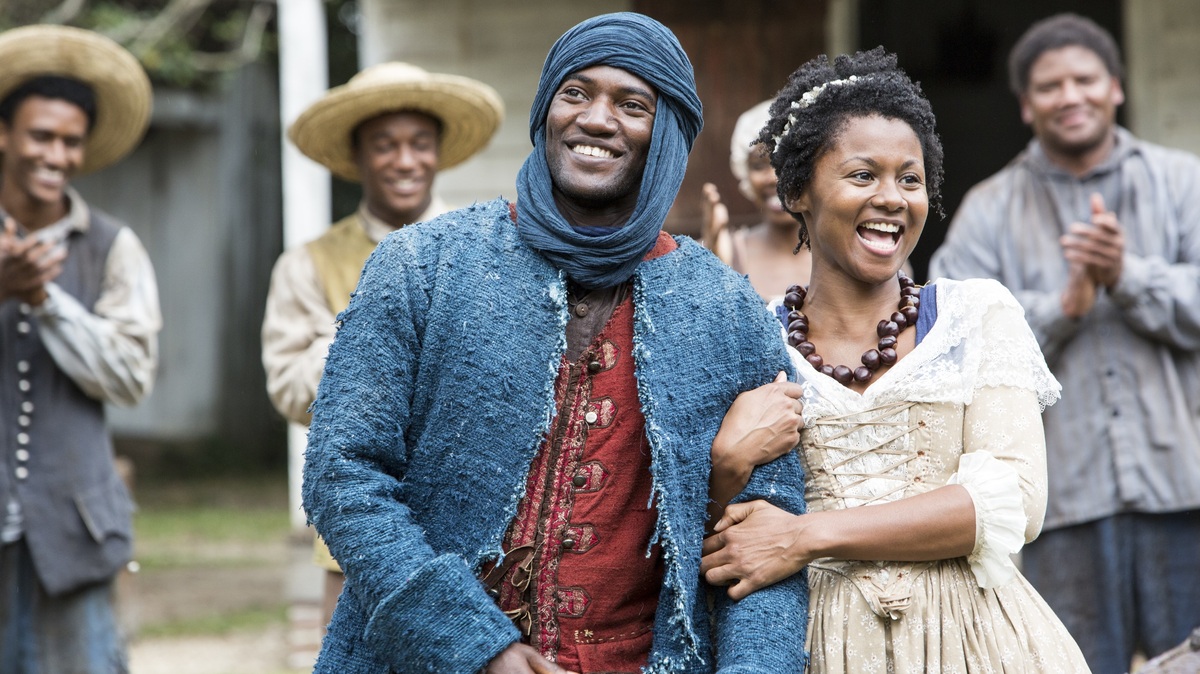 Malachi Kirby and Emayatzy Corinealdi in the new production of Roots.

From the moment you hear Laurence Fishburne's mesmerizing opening narration, intoned over sweeping visuals of a lush African forest, it's obvious History's new Roots miniseries has spared no expense to reinvent a TV classic.

But that also begs the question: Why do this at all? Why does the world need a new version of Roots?

"I heard today that fully 50 percent of the population of the United States that is alive now, was not alive in 1977 when the original Roots aired," says LeVar Burton, star of the original classic miniseries and co-executive producer of the new Roots.

"I'm not a big fan of remakes. I didn't think this would ever happen ... retelling this story. And I didn't necessarily believe that it should happen," said Burton, who got a call from executive producer Mark Wolper — son of original miniseries producer David Wolper — to join the project.

The actor/producer says Wolper showed the original miniseries to his children, who found it too dated. "I recognized immediately that there was an opportunity here ... one that I had not seen ... to retell this story, to and for a new generation," Burton adds.

I recognized immediately that there was an opportunity here ... one that I had not seen ... to retell this story, to and for a new generation.

Like the original, this new Roots portrays the journey of author Alex Haley's ancestors from life in Africa to slavery in the south and beyond. Fishburne plays Haley, heading a cast that includes Forest Whitaker, Anna Paquin and newcomer Malachi Kirby as Haley's African-born ancestor, Kunta Kinte.

But creating a new version also meant reimagining some of the most iconic moments in TV history. That includes the scene when Kunta Kinte is given his name by his father as a baby and held up to the stars — now similar to sequences in later movies like The Lion King.

"I had heard of Kunta Kinte before I heard of Roots," says Kirby, a British actor who grew up in London as the grandson of Jamaican immigrants.

"(Growing up) there were kids that would call me Kunta Kinte if ever my hair was particularly rough that day or I was dressed scruffy,"
Kirby adds. "It was a negative ... to be called Kunta Kinte or to be associated with being African."

He didn't actually see the original Roots until he was in his 20s, when he had a revelation.

"Kunta Kinte is the closest thing I've ever seen ... to a superhero," Kirby says. "He's amazing. He's inspirational ... The idea that they had taken this character as a negative was very confusing to me ... I grew up in an environment where it was a negative to be African or be associated with that."

The original Roots was an ambitious project. Based on Alex Haley's 1976 novel, Roots: The Saga of an American Family, the miniseries drew more than 100 million viewers back in 1977 and won nine Emmy awards.

It recounted how Haley's ancestor Kunta Kinte was brought to America as a slave and birthed a family who would eventually be free. The miniseries was revolutionary in presenting that journey as an American story, featuring black stars such as Leslie Uggams, Lou Gossett, Jr., John Amos, and Cicely Tyson.

Burton's first professional acting audition was for the part of Kunta Kinte. Eventually, he was performing alongside stars like Maya Angelou, who played his grandmother.

It also allowed actors — black and white — to show acting chops they rarely used in more tepid Hollywood fare. Roots delivered TV's most explicit depiction of slavery to a mainstream audience yet, kickstarting conversations about genealogy, the legacy of slavery and much more.

It also proved that white audiences would watch — in huge numbers — stories in which black people were the heroes and white people were often the villains.

So, when it came time to develop the remake, Burton and his fellow producers faced a high bar. Including figuring out who would play the new Kunta Kinte.

Burton says they searched for six months to find Malachi Kirby, a 26-year-old veteran of British TV shows like Doctor Who and EastEnders.

But Kirby said Burton did not offer much direct advice. Instead, the Roots veteran said something enigmatic just before they recreated the climactic scene where Kunta Kinte is beaten by an overseer with a nail-studded whip until he calls himself by his slave name, Toby.

"He told me that he was a mighty child, and I am a mighty man," said Kirby, who thought Burton was referencing their difference in experience when they each came to the role.

But then the scene began. And Kirby as Kunta Kinte decided to resist much longer — 20 lashes longer than the original scene — before saying the name Toby to avoid being beaten to death.

"I remembered these words that LeVar had shared with me," Kirby says. "And it caused me to resist (more)."

That spirit of increased resistance is a theme throughout the new Roots. The black characters in this modern miniseries resist more and fight harder against being victimized. The stories move faster and focus more on Haley's family; we don't see white slavers agonizing over their decisions.

The music is supervised by Questlove, drummer/co-frontman of rap band The Roots, the house band for The Tonight Show with Jimmy Fallon. Burton says all these touches are meant to create a miniseries that speaks more directly to millennial TV viewers.

Often the changes work. The Mandinka tribe shown in the new miniseries is more sophisticated: They expertly ride and train horses, they trade with Europeans and know how to use rifles.

The original Roots and author Alex Haley have faced controversy over the years. Haley, who died in 1992, settled a lawsuit by an author who accused him of plagiarizing parts of Roots. And Haley has called Roots "faction" — a combination of fact and fiction.

Burton says "new scholarship" inspired by Roots' success helped them to revise the story for accuracy. And he has a sharp rebuke ready for anyone who might look cynically upon seeing the star of the classic miniseries working to help create and publicize a new Roots.

"My body of work stands on its own," said Burton, 59, who was host and executive producer of the PBS show Reading Rainbow and co-starred on the syndicated program Star Trek: The Next Generation.

If you are alive and participating in this democracy, then 'Roots' is your story.

"I'm a part of this project, because I want to be here," he adds. "I recognized that this was going to be made and I had two choices: I could sit on the sidelines and judge. Or I could get involved and do whatever was within my power to help it become as good as it could possibly be."

Other recent films and TV shows have told slave stories for today's generations, including the WGN America series Underground and the Oscar-winning film 12 Years a Slave. Burton says these stories are important, though he understands why some black people would find them tough to watch.

"Black people still live in America and America is still a society that is based on the color line," says Burton. "I'm really hoping that this time around, we can have that conversation with each other on both sides of the color line and leave behind the shame ... leave behind the guilt ... the fear ... and a lot of the anger ... If you are alive and participating in this democracy, then Roots is your story."

But accomplishing that conversation, without disappointing fans of the original Roots, just might be the biggest challenge this new miniseries faces.

Good as this new Roots is, for those who saw the original, it probably won't have the same impact.