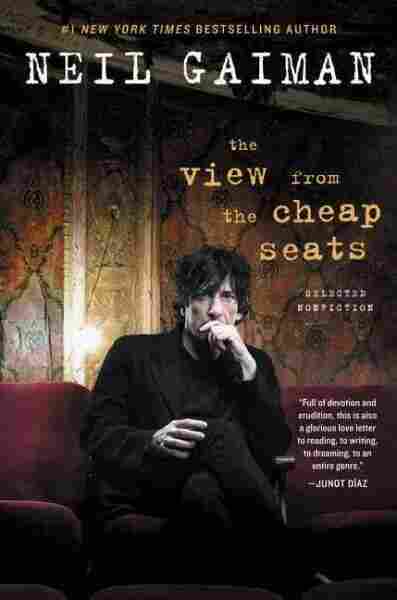 The View from the Cheap Seats

Neil Gaiman is best-known for his fictional creations, but he's no slouch in the nonfiction department. Barely a week goes by without the appearance of a foreword to a reissued book, an introduction to an album, an essay about genre fiction, a speech about the state of literature, a keynote address to one event or another, or a eulogy for a fallen writer that's been penned by him.

The View from the Cheap Seats gathers those bits and morsels, and it's a hefty tome indeed. That said, it's far from complete — an exhaustive collection of Gaiman's nonfiction would take up volumes, considering he started out as a young arts-and-culture journalist in the '80s. What View accomplishes, though, is considerable. Broken up into sections — "What I Believe," "Music and the People Who Make It," "Some People I Have Known," "Make Good Art," and so on — his musings shine with wit, understatement, and a warm lack of pretention. He speaks of "backing awkwardly away from journalism" in his youth, the first step of his eventual metamorphosis into an award-winning fantasy author with a fanatical following, and reflects on the patterns that arise in our lives: "Events rhyme."

Accordingly, View draws order out of the seeming chaos of Gaiman's scattershot career, from journalism to comics to novels to children's books to screen adaptations. He talks about his life, but always through the lens of an external subject, usually an object of passion: the superhero comics of the legendary Jack Kirby, the transgressive songs of Lou Reed, the way "the shape of reality — the way I perceive the world — exists only because of Doctor Who." That was written in 2003, before Gaiman actually wrote for Doctor Who; similarly, his many ruminations on American Gods, his greatest work of prose, take on a deeper resonance now that the book is well on its way to becoming a cable TV series.

Gaiman is a writer above all, though, and his entries about writing and reading make up the meat of View. They range from the deeply personal, eerily poignant "Ghosts in the Machines: Some Hallowe'en Thoughts," first published in the New York Times, to an appreciation of the element of dreams in H.P. Lovecraft's work — a particularly illuminating topic, as one of Gaiman's most beloved characters, Morpheus of The Sandman, is the deity of dreams himself. Even more intriguing is "All Books Have Genders," a meditation on the making of American Gods — as well as a humble assessment of his authorial flaws — in which he offers the succinct slogan "Novels accrete," an entire master class on the creative process summed up gracefully in two words.

As these sorts of odds-and-ends collections typically are, View is a mixed bag, both in subject matter and quality. For every astute, incisive essay like "All Books Have Genders," there's "A Speech to Professionals Contemplating Alternative Employment, Given at PROCON, April 1997," a piece of rambling, insider-baseball advice aimed at a room of comic book professionals that's as ungainly a read as its title would imply. Still, even in that speech, there are nuggets of wisdom and insight worth pondering. It's an intriguing snapshot of the state of publishing circa the end of the 20th century, just before the Internet changed everything.

Together these assorted tidbits form a mosaic — a composite picture of Gaiman as a writer, but also as a thinker, a cult figure, and barometer of genre fiction's trends and sentiments over the past 20-odd years. Not to mention an unassuming guy who just so happens to be a brilliant, best-selling author. As such, View is not only invaluable, but engrossing.