Accessibility links
Golden State To Face Cleveland In A Rematch Of The NBA Finals Stephen Curry and Klay Thompson carried the Warriors back to the finals, as Golden State rallied from a 3-1 series deficit to beat Oklahoma City 96-88 in Game 7 of the Western Conference finals. 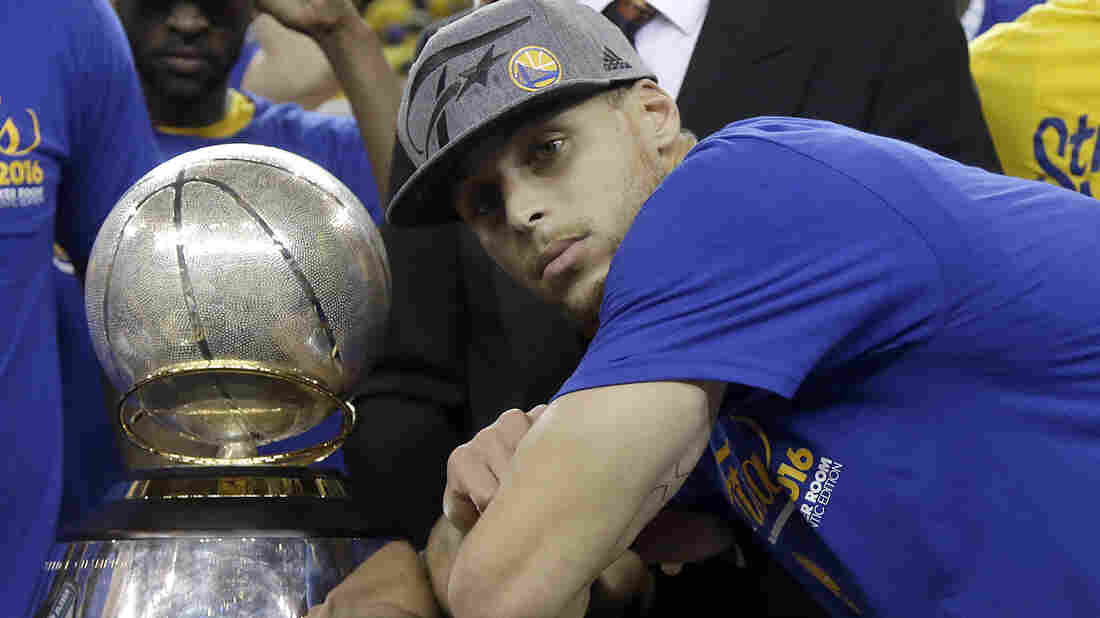 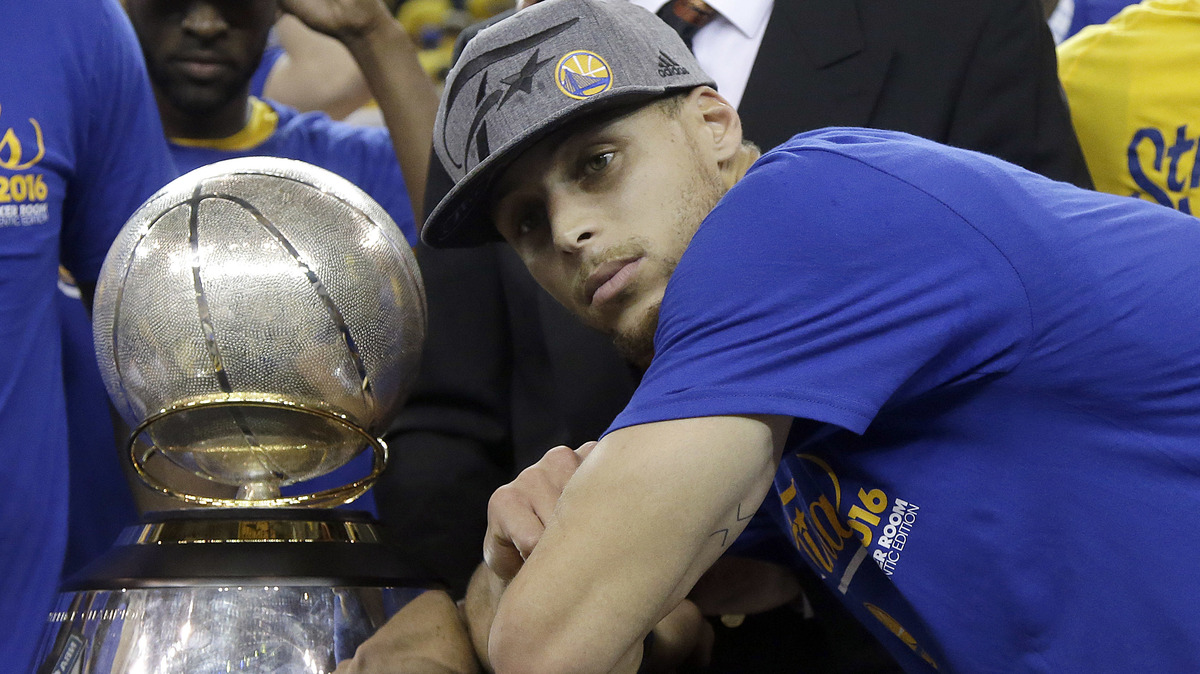 Stephen Curry knocked down yet another 3-pointer in the waning moments, pulled his jersey up into his mouth and yelled to the rafters in triumph once more.

A special, record-setting season saved for the defending champs, with a memorable comeback added to the long list of accomplishments.

Splash Brothers Curry and Klay Thompson carried the 73-win Warriors right back to the NBA Finals, as Golden State rallied from a 3-1 series deficit to beat the Oklahoma City Thunder 96-88 on Monday night in Game 7 of the Western Conference finals.

Now, Curry and Co. are playing for another NBA title - just as they planned since Day 1 of training camp in September.

"You appreciate how tough it is to get back here," Curry said. "You've got to be appreciative of this accomplishment, and look forward to getting four more wins."

The MVP scored 36 points with seven 3-pointers to finish with an NBA-record 32 in a seven-game series, and also had eight assists. Thompson added 21 points and six 3s, two days after his record 11 3-pointers led a Game 6 comeback that sent the series home to raucous Oracle Arena for one more.

The Warriors became the 10th team to rally from a 3-1 deficit and win a postseason series. They return to the NBA Finals for a rematch with James and the Cleveland Cavaliers, who lost the 2015 title in six games as Golden State captured its first championship in 40 years.

Game 1 is Thursday night in Oakland.

"We survived by the skin of our teeth," coach Steve Kerr said. "We were able to pull it out, and we're moving on."

His signature mouthpiece dangling out and the game ball cradled in his left hand, Curry pumped his right arm as yellow confetti fell through Oracle Arena once the final buzzer sounded.

With the Thunder trailing 90-86, Serge Ibaka fouled Curry on a 3-point try with 1:18 to go and the shot clock running out. Curry made all three free throws, then that 3-pointer to seal it.

"This is who he is. Having a clutch performance in a Game 7, that's Steph Curry," Kerr said.

And Golden State's beloved "Strength In Numbers" catchphrase coined by Coach of the Year Kerr was needed in every way.

"No one ever had any doubt that we could get this done," Draymond Green said. "People have seen teams down 3-1 before but they ain't seen many. They've definitely never seen a 73-win team down 3-1."

Andre Iguodala joined the starting lineup for just the second time all season and the 2015 NBA Finals MVP hung tough against Kevin Durant, who scored 27 points on 10-for-19 shooting. Shaun Livingston's breakaway, one-handed dunk late in the third provided a big lift off the Warriors bench.

"It hurts losing, especially being up 3 games to 1," Durant said.

It took a quarter and a half for Thompson to warm up after his 41-point performance in a 108-101 win Saturday at Oklahoma City that sent the series back to the East Bay.

He missed his initial seven shots before hitting a 3 6:02 before halftime, energizing the Warriors in their first Game 7 at home in 40 years.

Back-to-back 3-pointers by Thompson and Iguodala pulled the Warriors within 54-51 with 7:57 left in the third. They tied it on Curry's 3 at 7:21 and he followed with another 3 to give his team the lead.

Curry and Thompson each topped the previous record for 3s in a seven-game series, 28 by Dennis Scott and Ray Allen. Curry hit one over 7-foot Steven Adams in the third, and Thompson wound up with 30 3s.

Iguodala replaced Harrison Barnes in the starting lineup and what a move by Kerr, who did the same thing last year in crunch time. Iguodala made a pretty bounce pass through the paint to Green for Golden State's first basket, and his smothering defense on Durant kept the Thunder star without a shot until his 3 at the 5:45 mark in the first. Durant had just nine points on five shots in the first half.

But Oklahoma City dictated the tempo with snappy passes and the hard, aggressive rebounding that had been such a part of its success this season. The Thunder couldn't sustain it.

"They won a world championship last year, and they've broken an NBA record, and people are already talking about it before the playoffs started, this may be the greatest team to ever lace them up in the history of the NBA," Thunder coach Billy Donovan said.