Accessibility links
Donald Trump Released A List Of Veterans Groups He Says Received $5.6 In Donations Veterans groups received the money after Donald Trump had been questioned about his claim he had raised $6 million for them. Trump battled reporters on the issue in a news conference on Tuesday. 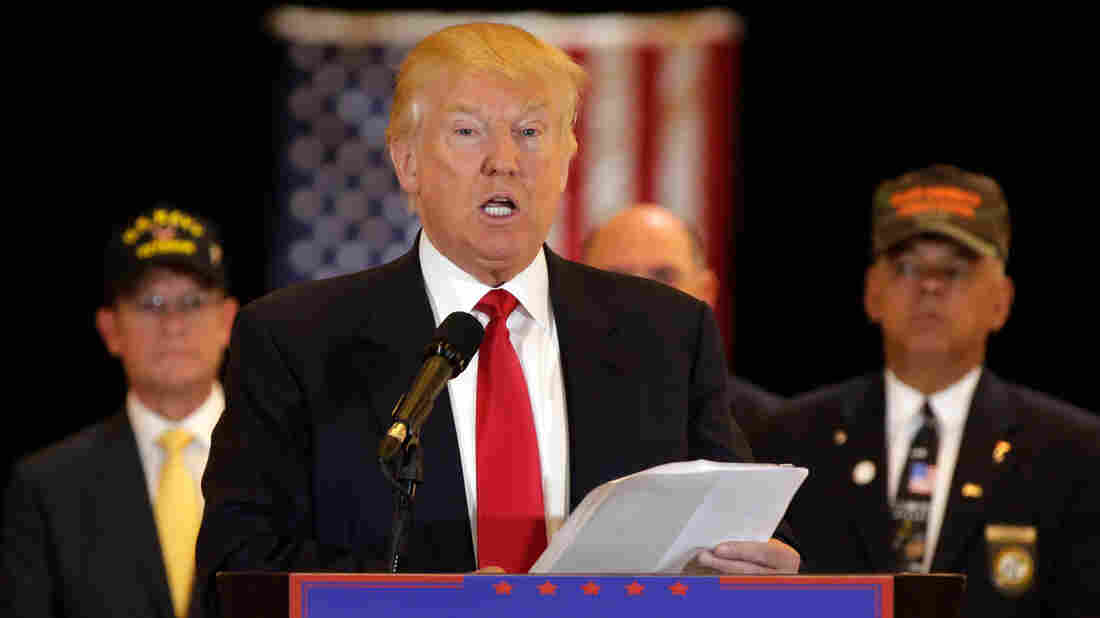 Donald Trump reads a list of donations he says were made to veterans groups following a fundraiser he held in Iowa back in January. Richard Drew/AP hide caption 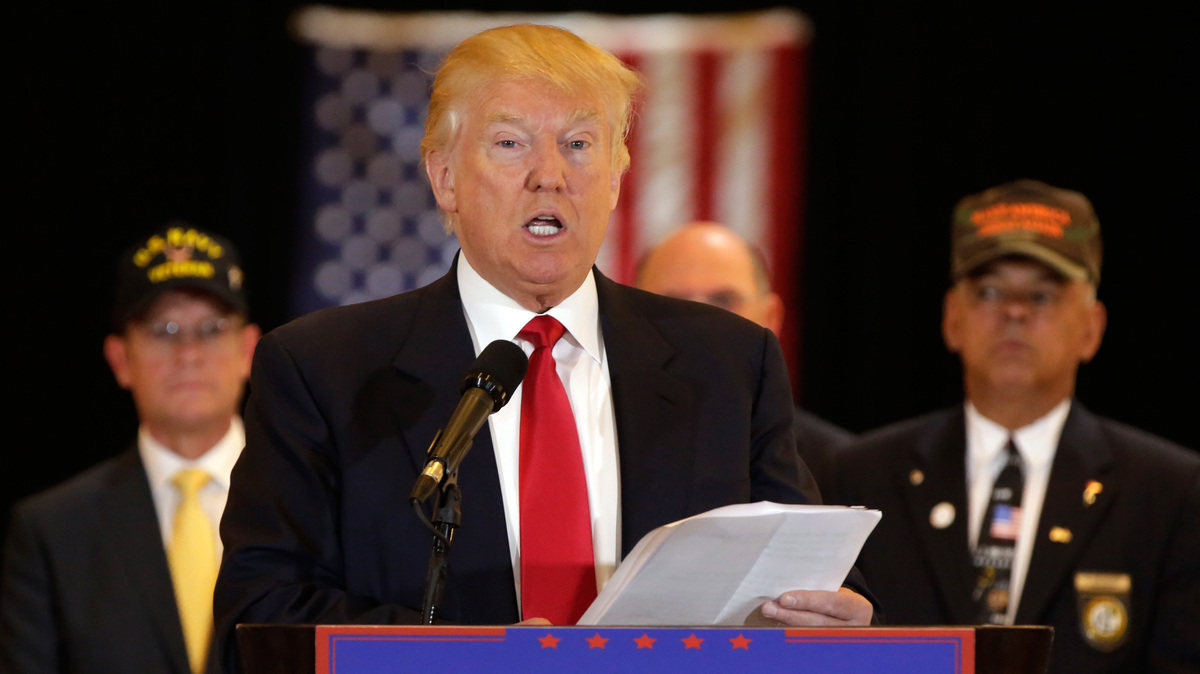 Donald Trump reads a list of donations he says were made to veterans groups following a fundraiser he held in Iowa back in January.

At least $1.9 million of the donations to veterans groups that presumptive Republican presidential nominee Donald Trump reported on Tuesday came in last week, after Trump began responding to intense media scrutiny of his earlier claims about raising in excess of $6 million for veterans. Trump said on Tuesday that his efforts raised a total of $5.6 million.

NPR reached out to all 41 of the groups Trump listed as receiving donations. Of those, 31 responded. One group, the Navy SEAL Foundation, said it does not disclose details of its donations. The other 30 confirmed the amounts Trump reported Tuesday, accounting for $4.27 million of the $5.6 million total.

The donations came in from a combination of sources, including the Donald J. Trump Foundation, various groups and individuals who cited Trump's efforts along with their donations, and Trump himself.

The candidate gave a $1 million check to the Marine Corps-Law Enforcement Foundation on May 24, as questions from the Washington Post and other news outlets about Trump's prior claims regarding these donations accelerated.

Prior to Tuesday, only about $4 million of the fund had been accounted for as paid to veterans charities and service organizations through reporting by various news organizations, chiefly the Post.

Trump engaged in a social media battle over the issue with that publication, saying he is being attacked for trying do to something for veterans, always adding that raising millions of dollars was something he didn't have to do. "I have never received such bad publicity for doing such a good job," Trump complained.

Tuesday, in his most combative news conference yet, in a campaign where he has set a new standard for a contentious relationship with the news media, Trump finally addressed the matter before reporters.

Speaking at his namesake Trump Tower in New York City, he continued to attack journalists for even asking questions about where the money went.

Trump grudgingly released the list of organizations that he says got the money. He predicted the $5.6 million total that he cited will continue to grow, to eventually top the $6 million figure he claimed back at the event where he first solicited donations to veterans, in Des Moines, Iowa, on Jan. 28.

But Trump continued to attack the press for asking for accountability about the money.

Trump also asserted that all of the money had gone to the groups, and that "zero dollars" went to administrative costs.

Finally, he offered reasons for the delay in releasing the list of recipients. Trump said organizations needed to be vetted to ensure their legitimacy and their nonprofit status. "We needed to vet the vets." Plus, he insisted that he wanted to do all of this privately, that he "didn't want credit." One reporter asked, if Trump didn't want credit, then why repeatedly remind people at events and on television that he'd raised $6 million for veterans? Isn't that "taking credit" the reporter added? Trump responded, "It's not."

One shouted question was, "Don't you believe you should be accountable?" Trump responded, "I'm totally accountable. But I didn't want credit for it."

At another point Trump said simply, "I don't think it's anybody's business if I want to send money to the vets."

He was asked why he resents the mere act of verifying the contributions. Trump said, "Because I wanted to make this out of the goodness of my heart. I didn't want to do this where the press was involved."

And, from a Fox News journalist, "Is asking a question an attack?"

Trump shot back, "From the political press it is, I see the stories they write."

It went on like this for 40 minutes. Reporters probing and pushing for information. Trump making no attempt to hide his contempt for them. One questioner wondered if this is what it would be like when a President Trump meets with the White House Press Corps.

The candidate shot back, "Yes, it is."