Accessibility links
'Possession' By Erin Thompson Charts The Tangled Paths Of Art And Antiquities Art crime expert Erin Thompson digs into the dirt around antiquities in her new book — what motivates collectors, what justifications they give and the politics around their acquisitions.

'Possession' Charts The Tangled Paths Of Art And Antiquities

'Possession' Charts The Tangled Paths Of Art And Antiquities 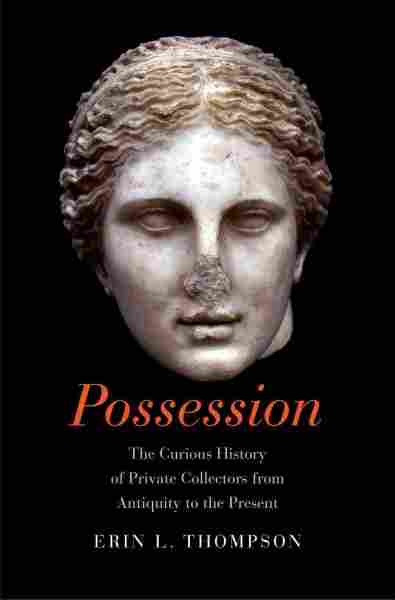 The Curious History of Private Collectors from Antiquity to the Present

The Koh i Noor diamond is back in the news this spring, including a telling quote about it from 2010, when Prime Minister David Cameron explained his decision not to return the diamond: "If you say yes to one you suddenly find the British Museum would be empty."

Possession: The Curious History of Private Collectors knows just what he means — and doesn't buy it. Written by "America's only professor of art crime," Erin Thompson, Possession is a book fascinated by collectors of antiquities: the lengths they go to, the justifications they give, the personas they shape and the politics in their wake. But it's also a book that understands that the relationship between art and collector runs deeper than prestige or pride. When all of antiquity is a heist, you are what you steal.

Thompson finds plenty of examples threaded through her history. Some are illuminating from a historical perspective: By 200 BCE, Grecian relics were already considered antiques by Roman collectors — remnants of a bygone culture. And collecting them became a way to align oneself with history, a useful but transparent PR move. By the first century CE, writer Quintilian was convinced collectors were hunting for overrated "masterpieces" out of "an ostentatious desire to seem persons of superior taste."

Of course, there was political value in having displays of wealth and culture to hand. But power also shaped collections — medieval collectors of "pagan" art had to be influential enough to avoid censure, and well into the 18th century, aficionados qualified their rights to a piece by suggesting they were of superior feeling and could resist salacious undertones. Thompson's scholarship shines here, from priceless correspondence to "restorations" that chiseled off genitalia to make things less sordid. (Didn't stop some; Pope Hadrian VI decried the Vatican's collection of erotic pagan idols and sealed off every entrance to the galleries ... except the one in his bedroom.)

This slim volume is just bursting with read-them-to-a-friend anecdotes of collectors who'd stop at nothing, like Pietro Barbo (later Pope Paul II), who was nicknamed "Mary Weeps-a-lot" for his shameless habit of crying until a fellow collector gave up the goods.

As with most successful social histories, this window to the past realigns our own sensibilities about art. Museums are full of works "attributed to"; Thompson points out that centuries of widespread forgery and bottom-up "restoration" of ancient works makes the statement optimistic, at best. At worst, collectors risk international tensions by "rescuing" art across the border. (At the very worst, art ends up discarded, destroyed, or disappearing — a mystery not even the most avid collector can solve.)

But despite the complex history of art as social currency, there are those whose passion goes beyond any obvious advantage. Naturally, they make for the best stories. This slim volume is just bursting with read-them-to-a-friend anecdotes of collectors who'd stop at nothing, like Pietro Barbo (later Pope Paul II), who was nicknamed "Mary Weeps-a-lot" for his shameless habit of crying until a fellow collector gave up the goods. Isabella d'Este heard Cesare Borgia had invaded Urbino and ousted her brother-in-law as ruler — and immediately wrote asking if he would mind sending her a few little palace statues she'd liked. In the 20th century, J. Paul Getty wrote romanticized, semi-autobiographical, wildly inaccurate short stories about the histories of his darlings. Art is passion; Thompson understands.

Of course, passion is still held accountable to posterity, and Thompson's no-nonsense prose doesn't let anyone off the hook. (Chapter 8 is titled without fanfare: "Collectors' Failed Justifications for Looting and Smuggling.") And though Possession's account of black markets, bribery and international demand for national works is a little bare-bones, it also concisely lays out a web of personal and political motives that's as complex as it is untenable. (The book falters a little in the last chapter, which argues for solutions to a problem it has already told us is 5,000 years in the making. The ideas are optimistic; the collectors, we already suspect, will find a way around them.)

Still, hope springs eternal. Perhaps the value of archaeological preservation will itself become a prestige commodity. Until then, the marvelous Possession offers a savvy history of passion as politics, a delightful collection of collectors and a love of art that might just send you to a museum.