Accessibility links
Do Vice Presidential Picks Matter? Here's How They Could For Clinton, Trump There's little evidence that vice presidential picks help candidates at the top of the ticket win a state. What nominees try to aim for often is balance.

How Might Trump Or Clinton Pick A Running Mate? Here's What The Data Say

How Might Trump Or Clinton Pick A Running Mate? Here's What The Data Say 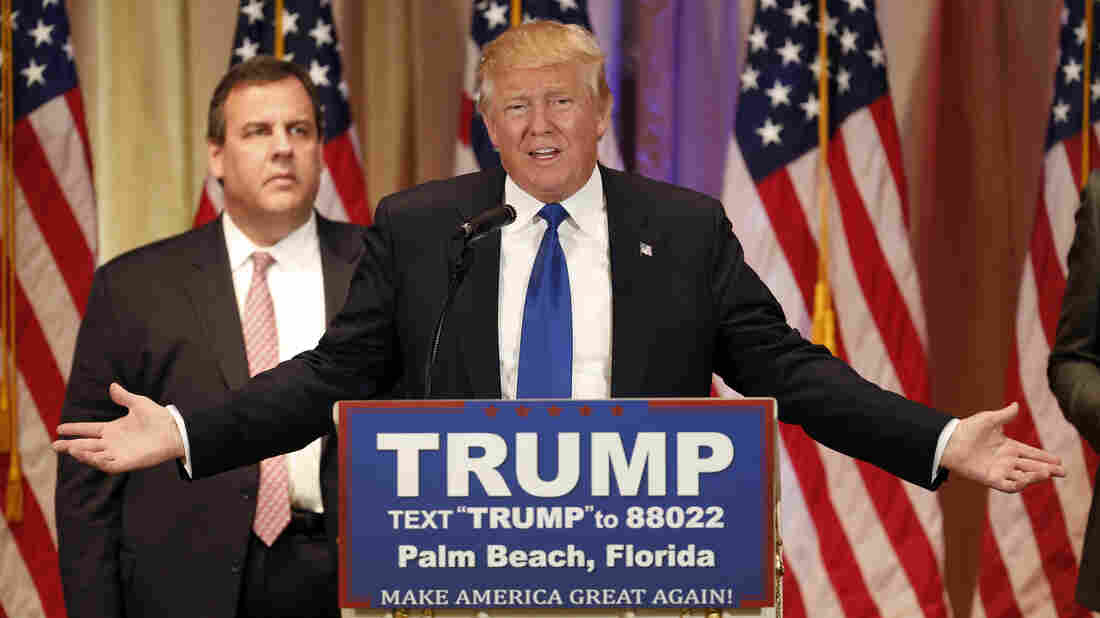 Ever since New Jersey Gov. Chris Christie endorsed Trump (and stood behind him at a Super Tuesday event), he has been on many people's lists of likely Trump running mates. Bloomberg/Bloomberg via Getty Images hide caption 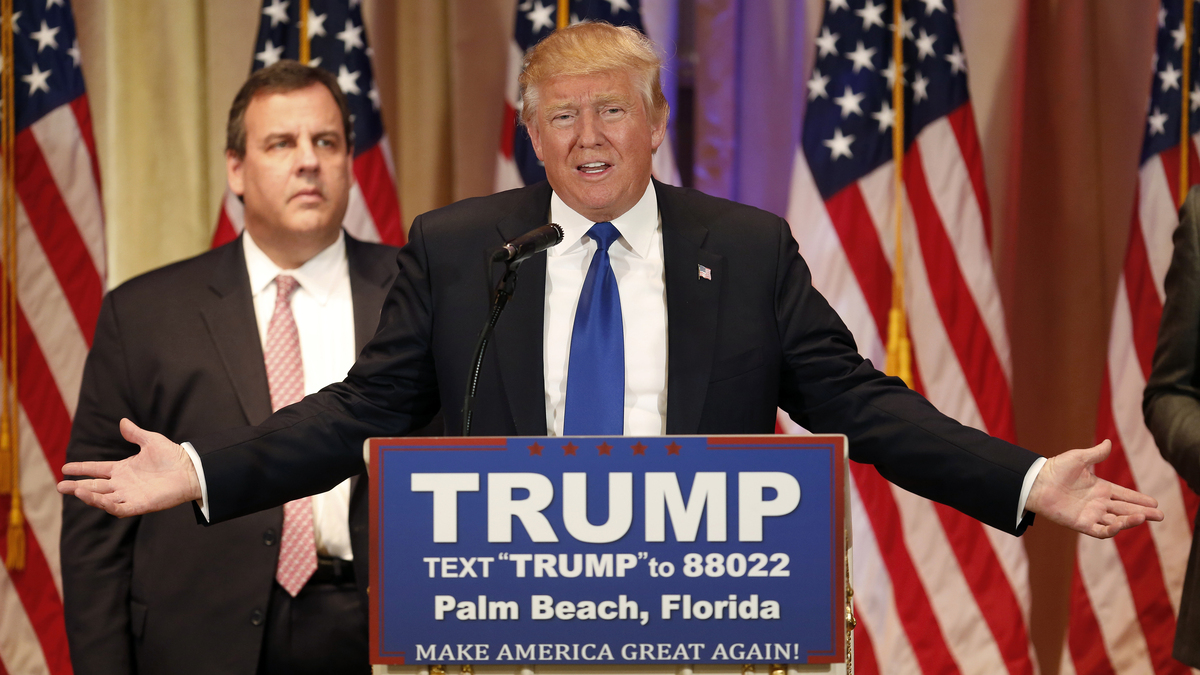 Ever since New Jersey Gov. Chris Christie endorsed Trump (and stood behind him at a Super Tuesday event), he has been on many people's lists of likely Trump running mates.

If D.C.'s builders put parlors into overpriced luxury apartments and condos — and, we guess, if people played games in them — the city's current favorite parlor game would be figuring out who likely Democratic nominee Hillary Clinton and Donald Trump would pick for their running mates.

Right now, bettors on online market PredictIt are leaning (ever so slightly) toward former Virginia Gov. and current Sen. Tim Kaine for Clinton and former Speaker of the House Newt Gingrich for Trump. That would be one VP candidate from a battleground state (Virginia) and one from what some are saying could be a new battleground state (Georgia).

That would line up with conventional wisdom, which says that candidates will try to pick running mates from battleground states in hopes of swaying voters in those states. But multiple studies suggest that doesn't really work. And either way, recent candidates haven't really chosen mates from those states all that often.

So how do they pick? Geography still plays into it, but it's all part of a bigger balancing act of picking a complementary candidate that sends a perfectly (or, as it sometimes turns out, imperfectly) calibrated message.

For all that candidates and pundits talk about choosing running mates from battleground states, most of the time (especially in recent years), those candidates haven't been from competitive places.

OK, but either way: Swing state or not, does picking a candidate from, say, Minnesota help a candidate win more votes in Minnesota?

Not really, according to political scientists Christopher Devine and Kyle Kopko, authors of The VP Advantage: How Running Mates Influence Home State Voting in Presidential Elections.

"What we see is by and large you're not going to do any better in a running mate's home state" than if they weren't on the ticket, Kopko said.

That "by and large" means there is a twist, however: "What we do find is a conditional effect," he said. "You're likely to get an electoral bump if the candidate comes from a really small state and they have a great deal of political experience in that state."

That means Joe Biden — who had represented tiny Delaware in Congress for decades — may have helped Obama's numbers in Delaware. Or maybe former Rep. Dick Cheney helped George W. Bush do well in low-population Wyoming.

This is just one of a handful of analyses that find little to no vice presidential home-state effect. In The Gamble, their book on the 2012 election, political scientists John Sides and Lynn Vavreck conclude that VP picks "have provided, at best, a very modest boost to the ticket on Election Day, both overall and in their home states," pointing to several studies over the decades. In a 2012 analysis, FiveThirtyEight's Nate Silver found that a VP pick "has produced a net gain of only about two percentage points for the top of the ticket in his home state."

Still, two points isn't nothing. And this being political science, there's no perfect consensus. A recent study bucks the conventional wisdom that home states don't matter, finding that, in fact, VP candidates have upped performance in their home states by an average of 2.67 points since 1884 — a modest-sounding gap, but one that the authors find swayed four elections since 1960 (1960, 1976, 2000 and 2004).

For their parts, Kopko and Devine only find one election where the vice presidential pick would have mattered geographically: 2000.

"It came down to New Hampshire in our analysis," Kopko said, pointing out that Al Gore had considered then-New Hampshire Gov. Jeanne Shaheen for his vice presidential nominee. "And that was the only Republican state in New England in the 2000 election. So had Gore carried New Hampshire, he would have had a majority in the Electoral College, and Florida would have been irrelevant."

Indeed, on the rare occasion when a candidate has chosen a running mate from the same region, it has been considered remarkable.

"In selecting a fellow Southerner, Mr. Clinton cast aside traditional strategies for choosing a Vice-Presidential running mate that have dictated the need for geographical diversity to balance the ticket," the New York Times wrote in 1992. (Later on, a political scientist told the Times the Gore choice was a "high-risk strategy" that might "alienate" non-Southern voters and also not win Southern states.)

Candidates almost always pick someone from an entirely different region of the country from their home state. Exceptions in the post-World War II period include Gerald Ford choosing Bob Dole in 1976 (two Midwesterners), Clinton choosing Gore in 1992 (two Southerners) and John McCain choosing Sarah Palin in 2008 (two Westerners — though, even at that, Arizona and Alaska are two very far-flung parts of the West).

So does it work? Maybe. Gore and Clinton, for example, were trying to shore up Democrats in the South, most of whom the party lost in three straight elections since 1980, when Ronald Reagan converted many of those Dixiecrats. Clinton and Gore did win back many of those Southern states, including Arkansas, Louisiana, Tennessee, Kentucky and Georgia. (Jimmy Carter won his home state of Georgia in 1980, but Democrats lost it in 1984 and 1988.)

Still, it's also possible that Clinton, the governor of Arkansas, would have won those states without Gore's help.

The real kind of balancing act that candidates seem to be aiming for isn't so much geographic as it is experiential. We matched up the offices candidates and their running mates held prior to being elected; often, but not always, there's some sort of a mix of experience (that is, a governor will choose a senator).

But then, it goes beyond even that — President Obama chose a fellow senator, but someone who had been in office for much longer than him. It's not just governors choosing senators, but people from outside government choosing running mates with federal government experience.

To try to get a sense of this, we added up candidates' total years working in the federal government. Here's how that looks:

There's a pretty clear pattern at work here, at least in most years: a highly seasoned candidate (McCain) will pick a fresh face (Palin). And sometimes, a young, relatively inexperienced candidate (like, say, an Obama) will likewise pick a Biden.

To frame it loosely, it's that Washington "insiders" tend to pick "outsiders" and vice versa. And even beyond that, the balance tends to run deeper, as presidents seem to choose someone who balances their areas of policy expertise. Obama's 2008 choice of Biden — a longtime member of the Senate Foreign Relations Committee — was considered a way to make up for Obama's thin foreign-policy experience.

"That's where I see the Washington-not-Washington connection mattering the most," Kopko said, "when a presidential candidate doesn't have a lot of federal political experience, and an experienced running mate can serve as an effective partner and adviser in the governing process, who also complements the presidential ticket."

This is not to say that state-level experience somehow isn't important. But it is to say that candidates with less experience in Washington often want someone who, for example, can be a liaison to Capitol Hill.

(And, to be fair, this count also doesn't capture people's full connections to Washington — George W. Bush, after all, certainly had connections in the Beltway, even though he had been serving as governor of Texas.)

So who will Clinton and Trump pick?

The two general guidelines for any candidate are to pick someone who could be president (of course) and to "DO NO HARM" — all caps — as NPR's Mara Liasson recently wrote.

OK, but those are maybe the broadest prescriptions possible. Is there anything more specific a candidate Clinton or Trump should do in picking a running mate?

For his part, Kopko said he has one additional piece of advice for any would-be candidates: "Think beyond Election Day. Without a doubt."

By that, he said he means candidates should think about who would be a good policymaker and leader (if not exactly an equal) — that is, even if that VP never (heaven forbid) ascends unexpectedly to the Oval Office. Vice President Biden, for example, has been visible in heading up task force after task force (cancer, the middle class, gun control) on issues near and dear to him.

"Ultimately that's what scholars have shown: a vice president having a greater role in governing in the last few decades," he said. "I think that's probably what voters are going to look to: 'Is the president making a wise decision here?' "

That's what they should do. But "ability to govern and lead" is tough to quantify in any data set. So what will Clinton and Trump do?

What the data do suggest is that, if they're anything like past candidates, Trump — a businessman with no elective office experience to his name — will pick a political "insider" who's also not from the Northeast, and possibly one who shores up his lack of experience in a non-economic policy area.

In that sense, former Speaker of the House Newt Gingrich would fit the mold perfectly, as an "insider" (or at least a one-time insider) from Georgia who spent 20 years in the House.

Clinton, who has been active in Washington on and off since the 1990s, would by these basic ideas pick someone from outside the Northeast, and she also may have room to pick someone who is not a Washington insider — one who perhaps is more experienced outside of foreign affairs.

... Not that anything about this election fits any usual mold. Clinton could follow her husband's precedent and pick someone more like her. For Clinton, that could mean picking a wonk like her (and one who also has Cabinet experience) to reinforce competence, someone like Labor Secretary Tom Perez.

This article originally misattributed a quote from Kyle Kopko to Christopher Devine. The quote has also been clarified: Kopko originally said, "What we see is by and large you're not going to do any better in a running mate's home state than if they were on the ticket." He confirmed with NPR that he meant "if they were not on the ticket." An earlier version also misidentified Tim Kaine as Virginia's governor. He is a senator and former governor.