Accessibility links
High Lead Levels Discovered In Chicago School's Drinking Fountains Chicago officials faced angry parents and three water fountains were shut down at an elementary school. Now, all of the city's public schools are being tested for lead contamination. 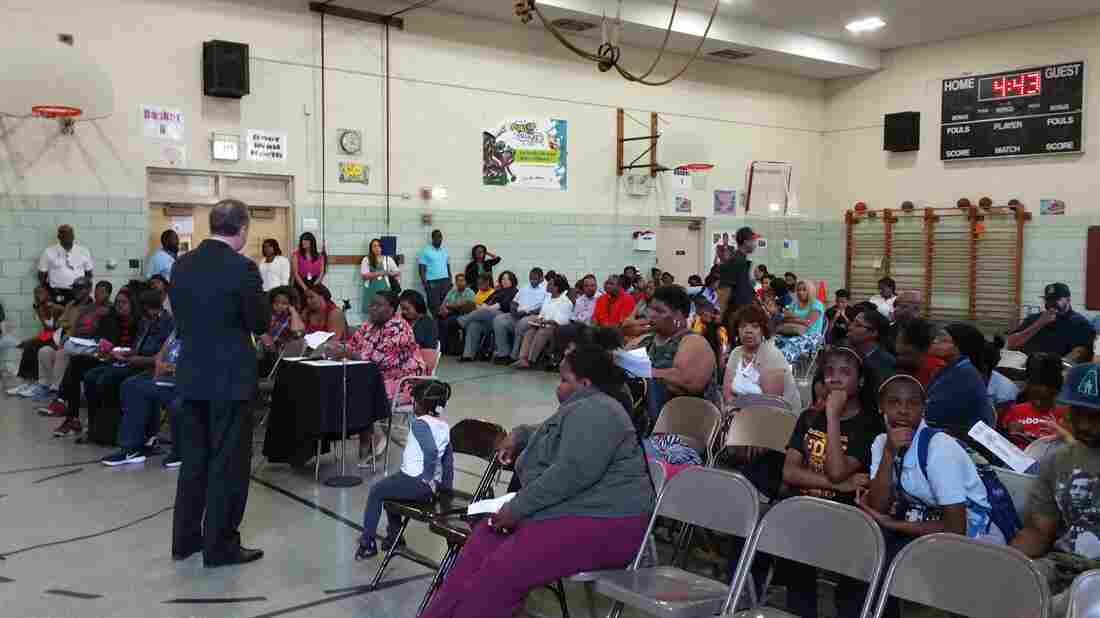 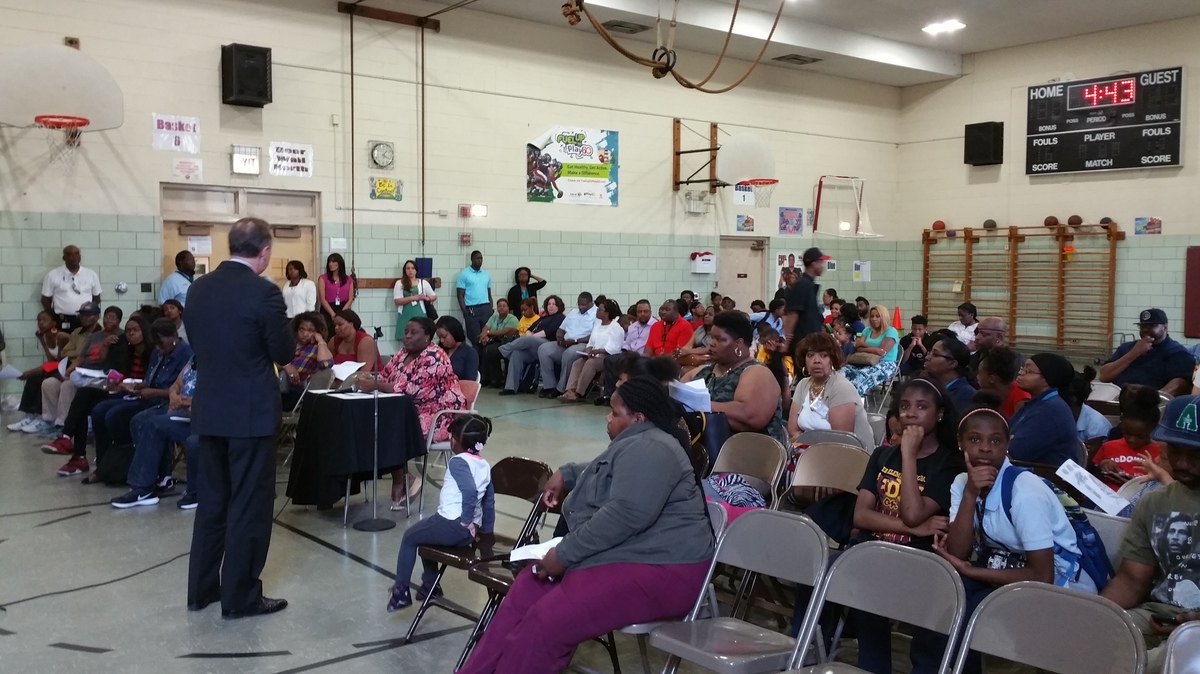 Angry parents attend a community meeting in the Tanner Elementary School gym, where school and city officials listen to their concerns.

It was a year ago, that Zashonda Alexander celebrated her oldest daughter's graduation from eighth grade.

High hopes turned into anxiety, though, after Alexander found out that her daughter, Junta, tested positive for lead poisoning. Tests for lead in the family's home proved negative, says Alexander, and she believes the culprit may be the drinking water at Tanner Elementary, a school on Chicago's South Side.

Tanner was the only school to show high levels of lead when authorities conducted a pilot test of 32 Chicago public schools. Now, the school district is offering blood tests to check for lead levels of any Tanner student, if a parent requests it.

When Chicago began its pilot test in late April, it joined other school districts across the country taking steps as a result of the drinking water crisis in Flint, Mich. The health hazard in Flint was caused by extremely high levels of lead in the city's drinking water after authorities changed Flint's water source from treated Detroit water to the Flint River.

In Chicago, most of the water outlets at the schools in the pilot showed little trace of lead; some had lead levels well below the federal government's standard of 15 ppb.

However, lead levels in three of the water fountains at Tanner were much higher, ranging from 47 ppb to 114 ppb. The school shut those fountains down, replacing them with water coolers.

How Do We Get Our Drinking Water In The U.S.?

Chicago Public Schools CEO Forest Claypool calls Tanner's results an isolated incident but says, "in an abundance of caution, we will be testing every faucet and water fountain that a student or staff member could be using for drinking water or consuming food in preparation with that water."

Claypool adds that testing will focus first on 250 Chicago public schools built before lead pipes were banned in 1986.

Like other city water departments throughout the country, Chicago adds orthophosphate to the water it distributes through the city's system of mostly lead service lines. The chemical adheres to the pipes. The protective coating prevents lead from leaching into the water.

Chicago's water commissioner, Barrett Murphy, says it works best if water flows through the pipes frequently. The department is also conducting a diagnostic study to determine what exactly happened at Tanner.

"We believe the high lead levels were isolated to drinking fountains not in high use," Murphy says. "Other fountains with high use did not have detectable levels of lead."

Murphy says authorities will also devise more aggressive flushing protocols for Tanner and other schools throughout the district, which will require authorities to run water at fountains and taps for a certain period of time to bring in fresh water that has not been sitting in the pipes.

'We're Going To Do This The Right Way'

Many parents at Tanner still have concerns, though, about the safety of the school's water. At a recent community meeting, they fill up the school's gymnasium along with children and area residents. Officials from the school district and the city's health and water departments stand in a line at the front of the gym. Tanner's principal, Nicole White, addresses the crowd first.

"You know you have advocates here at Tanner," she says. "You know we're not going to let anything happen to our babies. We're going to do this the right way."

However, Victoria Mosby, who has children in first, fourth and sixth grade at Tanner, isn't convinced.

"How long has this been going on?" she asks. "The three water fountains that they took is off the floor that my sixth-grader is on. So there's no telling how long my son has been drinking this polluted water and I have a problem with that."

Diana Greenhill, who has a daughter in fourth grade at Tanner, wants to know how the exposure to lead could affect the roughly 370 students who attend the school.

"Is it making them agitated because it messes with the neurological system?" Greenhill asks worriedly. She added that the water problems could be as dire as those in Flint.

"Chicago is no Flint," says Chicago's health commissioner, Julie Morita. Morita says there is no evidence that connects elevated lead levels to the city's water, which is drawn from Lake Michigan. She adds that most instances of lead poisoning among children in Chicago come from lead-based paint, not water.

"I have a child who attends a Chicago public school who drinks out of the water fountain and I would do the same," Morita says. "I don't feel like we need to have water bottles and water coolers shipped to every Chicago school," she continues, "but I think it's reasonable to test and reassure people that our water is safe."

The results of the expanded lead-in-water tests that are now underway at hundreds of Chicago public schools could bring a whole new level of confidence or concern.