Accessibility links
Why Trump Called A Press Conference To Bash The Press Challenged about his fundraising for veterans, Donald Trump detailed $5.6 million he says he has delivered. But the larger message was his ongoing assault on the media, which resonates with his base. 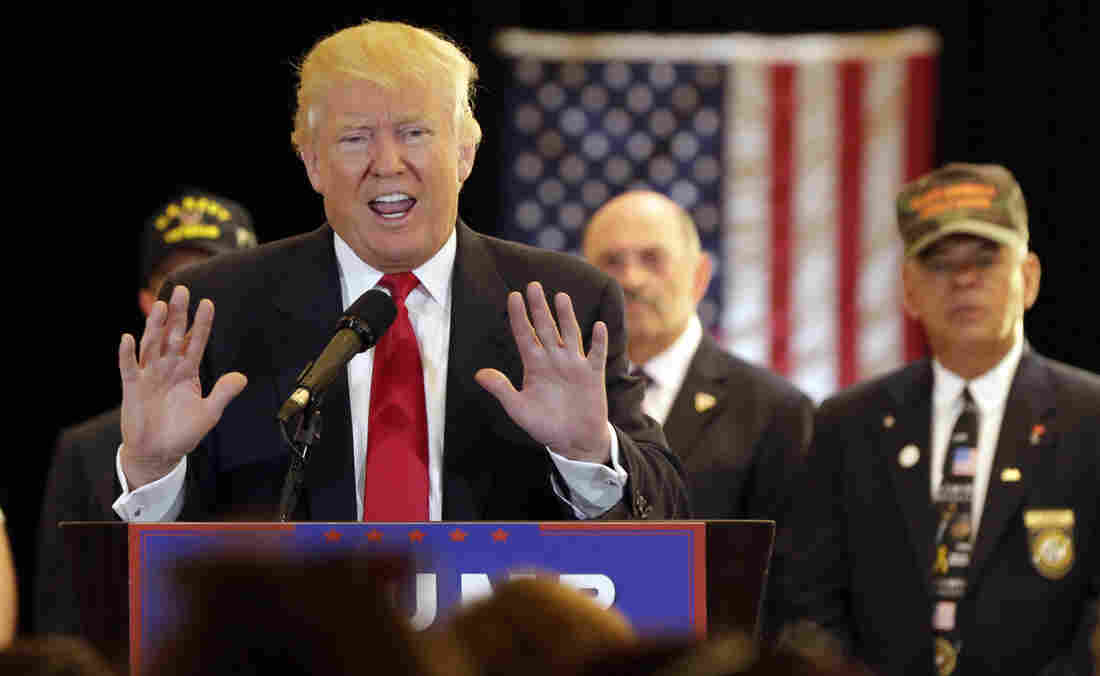 Flanked by veterans, Republican presidential candidate Donald Trump answers questions about money he raised for veterans groups. Trump spent much of Tuesday's press conference attacking the media, saying they should be thanking him rather than criticizing him. Richard Drew/AP hide caption 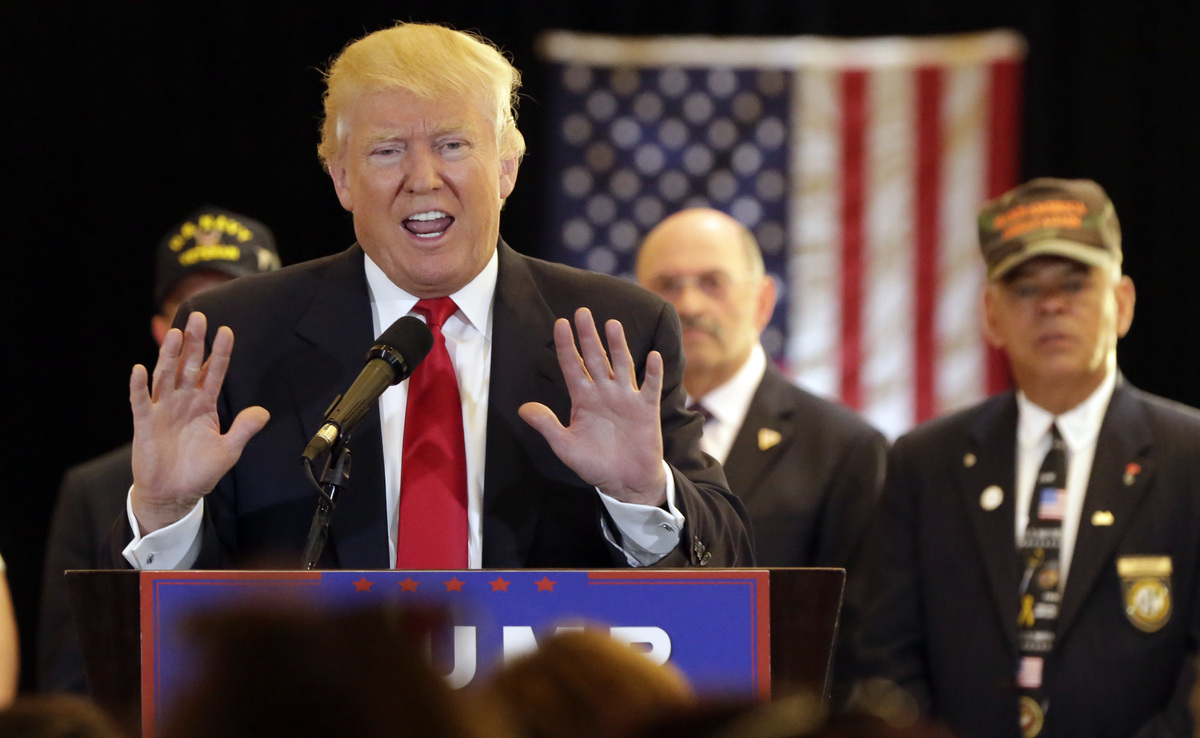 Flanked by veterans, Republican presidential candidate Donald Trump answers questions about money he raised for veterans groups. Trump spent much of Tuesday's press conference attacking the media, saying they should be thanking him rather than criticizing him.

Attacks on the press carry a long and distinguished lineage in the rhetoric of American political campaigns.

Donald Trump, however, is a natural, a true once-in-a-generation talent. Even though he relies on media exposure more than most to make his case, Trump appears intent on further degrading a press already undermined by changes to the industry and a steep drop in public esteem.

Backed into a corner over questions about his efforts to raise money for veterans groups, the presumptive Republican presidential nominee on Tuesday came out swinging at a press conference.

Trump called a reporter for ABC News, Tom Llamas, a "sleaze" and promised another reporter his belligerence toward the media would continue throughout the general election: "Yeah, it is going to be like this. You think I'm going to change? I'm not going to change."

Flanked by veterans during the 40-minute event, Trump repeatedly identified what he sees as the source of injustice in the modern political world.

"I think the media is frankly, made up of people [who] in many cases — not in all cases — are not good people," he said.

"The press is so dishonest and so unfair," he declared at another juncture.

"I think the political press is among the most dishonest people I've ever met," he added for emphasis.

"The bad part about it — the dishonesty of the media — is that people like me will be inclined not to do it anymore," he said, referring to the money he raised for veterans.

This is pretty rich coming from a self-described multi-billionaire (though some journalists have credibly disputed that, too), who has relied upon near-blanket coverage and relentless interviews in the mainstream and conservative media to propel his campaign.

Using Media Attacks To His Advantage

In some ways, Trump is the most media-friendly candidate, appearing on outlets from MSNBC's Morning Joe to Bloomberg Businessweek to The Hollywood Reporter to The Alex Jones Show, which often deals with conspiracy theories.

When was the most recent time Hillary Clinton took questions at a formal press conference? For those keeping score, it took place last December — six months ago — though she has given interviews during this period.

Of course, all of this Trumpian venting was occasioned by some actual reporting, perhaps most notably by the Washington Post's David Fahrenthold.

His recent story found that Trump had not raised the $6 million he announced at a nationally televised event in January that was explicitly devised to counter-program a Fox News debate among Republican candidates. Trump boycotted that debate after a months-long squabble with that network.

But that relied on at least 13 additional gifts in the past week totaling roughly $1.9 million. By NPR's tally, that figure incorporates a new $1 million gift from Trump himself dated May 24.

That is, the insistence on accountability from the dishonest, unfair, not good press, forced Trump to make good on his past pledges, as CNN political correspondent Dana Bash reminded viewers on Tuesday.

"I pride myself, as we all do, on being dispassionate, but this is a situation where I don't think we should be dispassionate," Bash said. "It is our job to ask questions, particularly of public figures, especially somebody who wants to be the leader of the free world."

She went on to say: "When they make a promise and they do it in a very public way, like he did with this big rally for veterans ... it is a fundamental requirement and responsibility of a free press. It's what makes us different than North Korea or other places."

Trump's core backers will embrace his rhetoric. It also serves to discredit whatever the press does turn up from his old record. That tactic should bear fruit almost immediately, as tough-hitting reports this week have focused on accusations of wrongdoing at Trump University and the shortcomings of his business dealings in Hong Kong, among other topics.

Trump's remarks looked peevish, not presidential. But they have strong precedent on the campaign trail. They stretch back from the anti-NBC chants on the floor of the Republican National Convention in 2008 to George H.W. Bush's "Annoy the Media" bumper stickers to the open hostility of the Richard Nixon/Spiro Agnew ticket in 1968.

Much of it is posturing. Bush, of course, also hand-wrote reporters and columnists thank-you notes and took jogs with some of the White House press corps on the Washington Mall. Trump has been known to call reporters at home to trade tips about real estate news, celebrity gossip and politics.

"For all his bluster and insults, Trump answered the core unanswered questions — who got what and why and how much," Garrett wrote in an email. "[By] providing those answers, Trump validated the questions he ‎criticized."

In addition, Garrett wrote, "It didn't feel particularly abrasive in the sense Trump attacks all the time. He's attacked me on Twitter and in person. You soldier on and he respects it. There is a gamesmanship with Trump that never ends."

Yet his attacks on individual reporters and anchors consistently set an ugly tone. There is a through-line to his savaging of Fox's Megyn Kelly, despite their mutually advantageous reconciliation for her prime-time Fox broadcast network special, his contempt for Univision's Jorge Ramos and his mockery of the disability of The New York Times' Serge Kovaleski.

That contempt surfaces in Trump's asides calling for revision of American libel laws to make such suits easier to win; his bombast aimed at Amazon founder Jeff Bezos, who owns The Washington Post, which has aggressively pursued the Trump University story; his characterizations of The New York Times as a loser news organization; and the suggestion last fall that the Federal Communications Commission should fine a Fox News pundit who dared to criticize him.

Who knows. Trump has never held elected office, so voters can't know how he would act when he holds presidential powers. But they have glimpsed a lot about how this candidate thinks about the media. As CBS's Garrett suggests, Trump writes a split-screen narrative daily: hostility in one corner, a warm embrace in another, whether for ideology or profit or both.

Trump took time out Tuesday evening to praise a Fox News conservative stalwart — and to plug himself.

"Congratulations to @seanhannity on his tremendous increase in television ratings," Trump tweeted. "Speaking of ratings — I will be on his show tonight."

Hannity revealed he would be voting for Trump in November. Trump, he said, had been working hard to fend off liberal media attacks.