Accessibility links
When The Kid Becomes The Teacher: On What It Means To Be Transgender Allie is an 8-year-old transgender child. Her parents field a lot of questions about her transition. But they say Allie's openness makes her the best teacher for those curious about being transgender. The Slipakoff family lives in Kennesaw, Ga. Allie (front right), 8, is transgender. Her parents field a lot of questions about her transition, but they say she remains the best teacher. Courtesy of the Slipakoff family hide caption 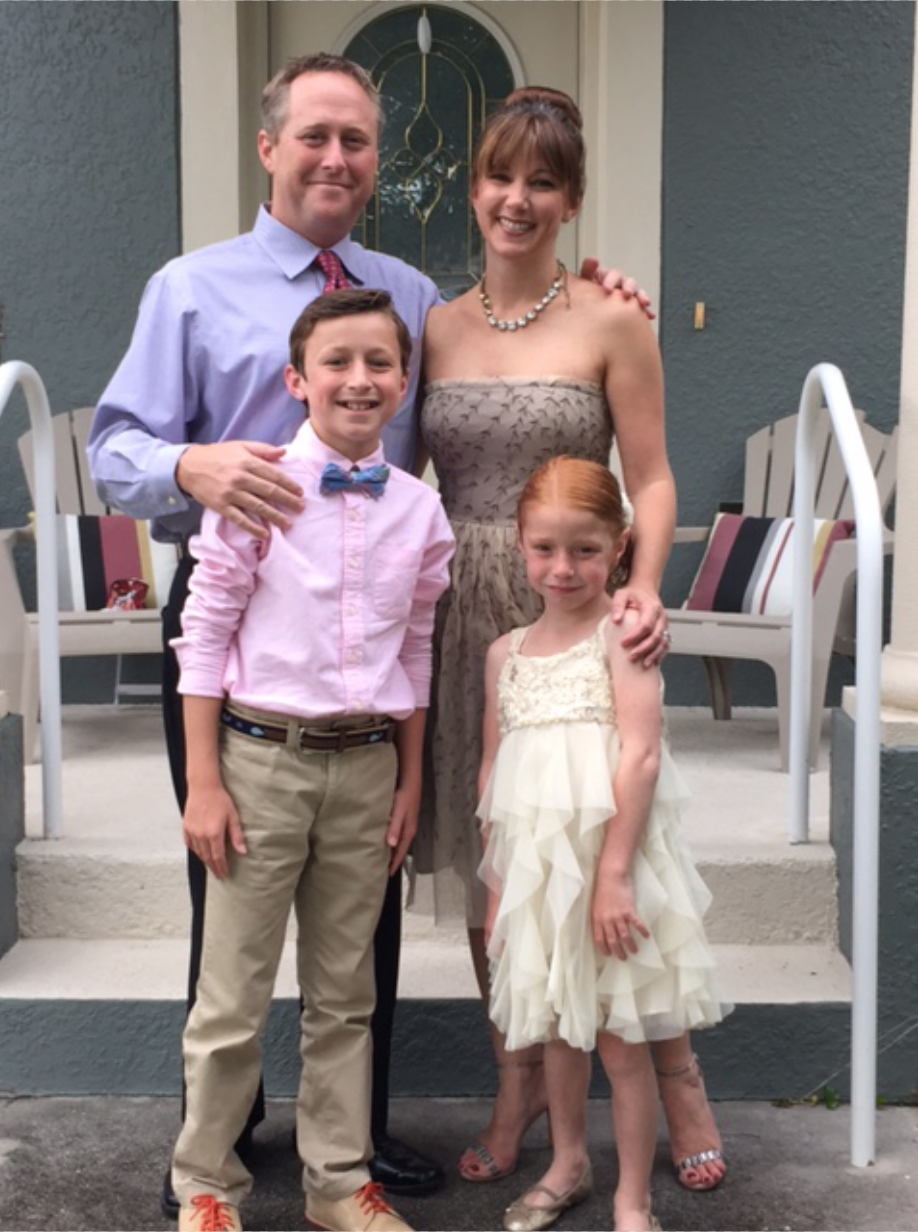 The Slipakoff family lives in Kennesaw, Ga. Allie (front right), 8, is transgender. Her parents field a lot of questions about her transition, but they say she remains the best teacher.

Courtesy of the Slipakoff family

It's bedtime, and 12-year-old Ethan and 8-year-old Allie Slipakoff are riled up. The kids goof off in the playroom of their suburban Atlanta home; parents Jen and Adam sit in the kitchen nearby.

Allie likes to talk about her striking, red, shoulder-length hair. Sometimes she puts it in a side ponytail, the second-grader says, and it "actually turns out really good."

Allie is transgender, and gets lots of compliments about her hair. When she was younger and dressed in boys' clothes — she began transitioning when she was about 4 — Allie still made her parents buy her dozens of accessories to wear on her head.

Her father, 43-year-old Adam, says it worked as a sort of "crutch," as Allie and her family tried to figure out what clothes to buy, and what name she wanted to use — it had been Eli.

What it means to be transgender, let alone have a kid who is transgender, is something Allie's parents had never thought about.

"Not even a little bit," says Adam.

"It never even ever crossed our mind, ever," says Jen, her 38-year-old mother.

Dating, relationships and sex already can be tough topics for parents to discuss with their kids. The latest complicated topic is the national debate over bathrooms and transgender students.

But when it comes to that issue, in families like the Slipakoffs, children are directing the discussions.

Allie talks openly about what it means to be transgender and explained to her parents, for instance, how using a different pronoun can hurt someone's feelings.

Her mother recalls a day when Allie told a new friend at school about her change.

So Allie took her friend to the teacher.

" 'How did she go from being a boy to a girl?' and the teacher said, 'Well, she grew her hair long and wore girls clothes,' and the little girl was like, 'OK,' and that was it, and they literally held hands, turned around, and skipped away, and that was the end of it."

When Maddy Became Jake: A Father And Son's Enduring Love

Kennesaw, the city where the family lives, is in one of the most conservative congressional districts in the country.

Allie's parents say that for the most part they get a lot of friendly questions from friends and other parents — though they have encountered some people who, Adam says, "have trouble holding their tongue, because they want you to know where they stand on it" — but Allie remains the best teacher.

"If you knew someone was transgender, even if you didn't like that person you would still have to be nice to them," Allie tells her mother. "Because they've been working ..."

Her mother finishes her sentence: "They've been working through a lot of issues?"

When Allie was dressing as a girl, but still went by the name Eli she faced some animosity from other kids at school.

Now Allie uses a gender-neutral bathroom at her private school.

More recently, Jen says, Allie came to her in tears after students asked her, "Are you really a girl? Or are you a boy?"

"It does upset her, and kind of reminds her that she's got these things to face for her whole life, maybe," her mother says.

But Jen says those are mostly questions from genuinely curious kids, and Allie tells them without hesitation that she's a girl.

How Schools Around The Country Are Treating Transgender Student Rights

Debbi Shulte lives near the Slipakoffs. She stops by one night after the kids are in bed.

Shulte is quick to talk about her love of Jesus and say she attends church every Sunday. She says she never knew a transgender person before Allie.

"I honestly will tell you the honest truth," Shulte says. "I don't know I would have believed it had I not seen it first-hand."

And Shulte says her own children have taught her to be more comfortable around people who are transgender. When Allie first started dressing as a girl, Shulte warned her son not to say anything — which only confused him.

"And I said, well, I just don't want you to point out that Eli is now wearing a dress," Shulte says. "And he said, 'What are you talking about like, what would you say?' And I said, 'I'm just saying don't, don't say anything that would hurt her feelings.' And he said, 'Why would I do that?'"

Jen says it reminds her of racial segregation in the South.

Allie doesn't know much about the debate over bathrooms. School and dance classes keep her busy, along with the lessons she shares with neighbors about what it means to be transgender.