Accessibility links
Review: Colvin & Earle, 'Colvin & Earle' Side by side, with good humor and the wisdom of experience, two veteran songwriters dwell on what it means to be creatures of habit, all while learning to live with deficiencies and disappointments. 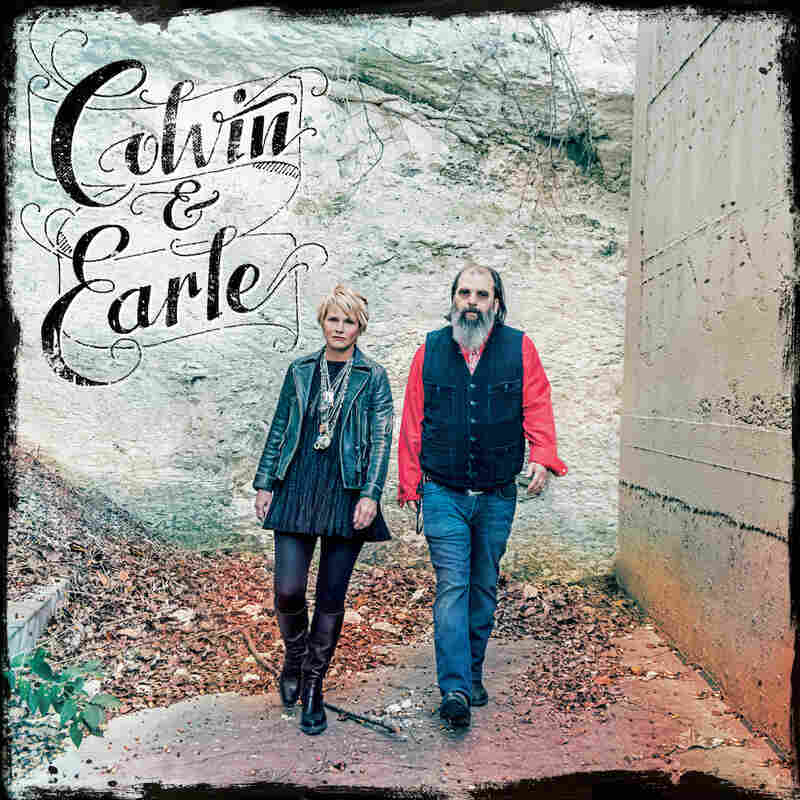 One of a solo singer-songwriter's central projects is to prove that her artistic identity stands on its own; to set her writerly voice apart; to establish her individuality in the minds of listeners. But for those who do that well enough, and for long enough, the prospect of exploring musical partnership can begin to exert powerful appeal. That and a shared history were no doubt selling points for Shawn Colvin and Steve Earle, who first crossed paths on a show bill three decades ago. After that, they each enjoyed fleeting mainstream breakthroughs before eventually settling into positions of stature in the Americana scene, then teaming up for a duo tour in 2014.

With Colvin & Earle, they've elevated their collaboration to the level of top-flight album-making, bringing seemingly opposing impulses to the process. Earle is known for being as mercurial an artist as Colvin is a meticulous one. While she's teased out tensions between conscious commitments and concealed desires with her feathery vocal finesse and the deft, revealing gestures in her frequently co-written songs, he's mostly written alone, inhabiting the roles of undomesticated loners on his wildly varied conceptual projects, giving artfully primal and prickly performances. This new way of working is different for both of them. Here he is, splitting the writing duties and supplying slouching harmonies in several tracks. And here she is, loosening her approach to accommodate Buddy Miller's rugged production and embracing the unevenness between her and her singing partner's phrasing like it's a deliberately unfinished hem.

Earle and Colvin tackle three mid-'60s pop hits with relish, lending a touch of nostalgia to the freewheeling postures of "Ruby Tuesday" and "You Were On My Mind," and to the protagonist's youthful determination to escape in "Tobacco Road." But their breezy cover of Emmylou Harris' "Raise The Dead," which contrasts towering proto-rock mythology (the inevitability of Hank Williams' early end, Robert Johnson's deal with the devil) with enduring entanglements in this life, is more in step with the spirit of their originals.

In the loping hillbilly rocker "Come What May," Colvin and Earle wryly acknowledge the mismatch between powerful attraction and self-sabotage. "Can't live without each other, can't take it anymore," they complain. "Something's gotta give, but it never did before." The acoustic ballad "The Way That We Do" is a meditation on patterns that bind a relationship together and doom it to unravel. In "You're Right (I'm Wrong)," an agitated country-blues number laced with needling electric-guitar licks from Miller, Earle and Colvin lurch through a litany of regrets. "Maybe the truth," they admit, "is neither one of us ever loved anybody at all." "You're Still Gone," a song initially begun by Miller's wife, the beloved songwriter Julie Miller, is haunted by a loved one's inescapable absence. Even the spiritual of sorts "Tell Moses," with its familiar blending of biblical and historical imagery, is less about overcoming than simply carrying on. Each time they reach the refrain "Water is wide / Milk and honey on the other side," their deliveries droop beneath the realization that the struggle never ends for the oppressed — it simply takes on new forms.

Side by side, with good humor and the wisdom of experience, these two songwriting veterans dwell on what it means to be creatures of habit, dragging deficiencies and disappointments around and learning to live with them. The tousled nature of their mutuality makes it arresting.