Accessibility links
Book Review: 'Grief Is The Thing With Feathers,' By Max Porter Max Porter's darkly funny, fiercely emotional new novel centers on a family — a husband and two sons — devastated by the loss of their wife and mother. And then the crow appears. 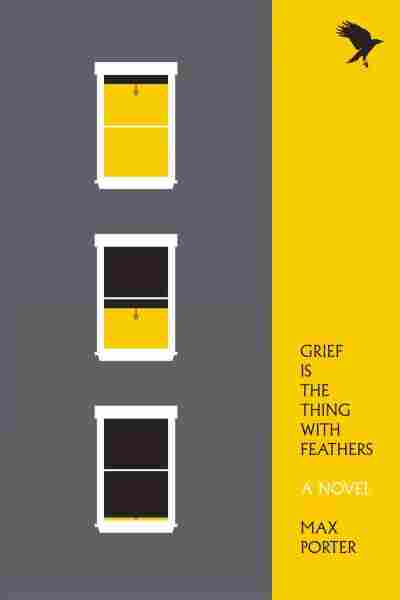 Grief Is the Thing With Feathers

Title
Grief Is the Thing With Feathers
Author
Max Porter

What is it with poets and birds? Edgar Allan Poe had his raven. Ted Hughes had his crow. Wallace Stevens his blackbird. Keats his nightingale. Helen MacDonald her hawk. For Emily Dickinson, hope was the thing with feathers.

And now there's Max Porter's protagonist, a suddenly widowed father of two small boys struggling to meet a deadline on a book of literary scholarship to be called Ted Hughes' Crow on the Couch: A Wild Analysis. In the derangement of his cataclysmic grief, he conjures up a shape-shifting crow, a black predator who snacks on unbrushed teeth and feeds on death and finds "humans dull except in grief." Like a warped walk-on from Disney, this wise-cracking feathered friend comes to roost in the family's London apartment, "every surface dead Mum, every crayon, tractor, coat, welly, covered in a film of grief," and he promises, "I won't leave until you don't need me anymore."

As resonant, elliptical and distilled as a poem, Grief Is the Thing With Feathers is one of the most moving, wildly inventive first novels you're likely to encounter this year. It's funny — in a jet-black way — yet also fiercely emotional, capturing the painful sucker-punch of loss with a fresh immediacy that rivals Joan Didion's The Year of Magical Thinking.

But the mournful magical thinking of Porter's widower stretches over years. "Moving on, as a concept, is for stupid people, because any sensible person knows grief is a long-term project," he writes. Grief, he adds, is "the fabric of selfhood, and beautifully chaotic."

The novel is narrated from the alternating points of view of the Dad, the Crow and the Boys — who say they sensed something was wrong even before their father told them about their mother's freak accident. Their bewildered reaction to this unfathomable news makes sense: "Where are the fire engines? Where is the noise and clamour of an event like this?"

As resonant, elliptical and distilled as a poem, 'Grief Is the Thing With Feathers' is one of the most moving, wildly inventive first novels you're likely to encounter this year.

Porter nails the father's weariness with all the "orbiting grievers," including "the overstayers, the new best friends of hers, of mine, of the boys." He rues the "lovely, quick, template-ready arguments" he and his wife will never have and the myriad mundane things she'll never use again — "makeup, turmeric, hairbrush, thesaurus." The family home quickly morphs into "a physical encyclopedia of no-longer hers." Movingly, he recalls their happy past with a lovely image of "the early days, when our love was settling into the shape of our lives like cake mixture reaching the corners of the tin as it swells and bakes."

In retrospect, a snowy outing alone with the boys when she was sick now strikes him as "a dress rehearsal for the rest of our lives."Crow says he's sounding "like a fridge magnet." A friend unhelpfully points out the line between grief and impractical obsession and asks him if he's "seeing anyone ... To talk things through?" When people tell him he needs time, he thinks, "what we needed was washing powder, nit shampoo, football stickers, batteries, bows, arrows ... Shakespeare, Ibn 'Arabi, Shostakovich, Howlin' Wolf."

The novel reminds us beautifully that life and memory are in the details. The boys, resilient though forever altered and periodically susceptible to "great sink-holes of melancholy," note the "guilty pleasure" of "flecking the mirror with toothpaste," which their mother hated. "We pissed on the seat. We never shut drawers. We did these things to miss her, to keep wanting her." They act out and lie and fight, but they also flank their father protectively on the sofa. He comments that "the pain of them being so naturally kind is like appendicitis. I need to double over and hold myself because they are so kind and keep regenerating and recharging their kindness without any input from me." Years later, they recognize their role in preventing him from succumbing to utter despair.

Like C.S. Lewis' A Grief Observed, Julian Barnes' Levels of Life, Helen MacDonald's H is for Hawk — and Didion's The Year of Magical Thinking — Porter's unusual novel puts grief in its place not by dismissing it, but by confronting it dead-on as a painful but inescapable part of life. Grief is the Thing With Feathers is a wondrous, supremely literary, ultimately hopeful little book.