Accessibility links
To Tame A 'Wave' Of Invasive Bugs, Park Service Introduces Predator Beetles The forest at Great Smoky Mountains National Park is sick, infected by invasive aphid-like bugs. To help save the trees, the park's vegetation crew uses pesticides as well as a tiny beetle from Asia. 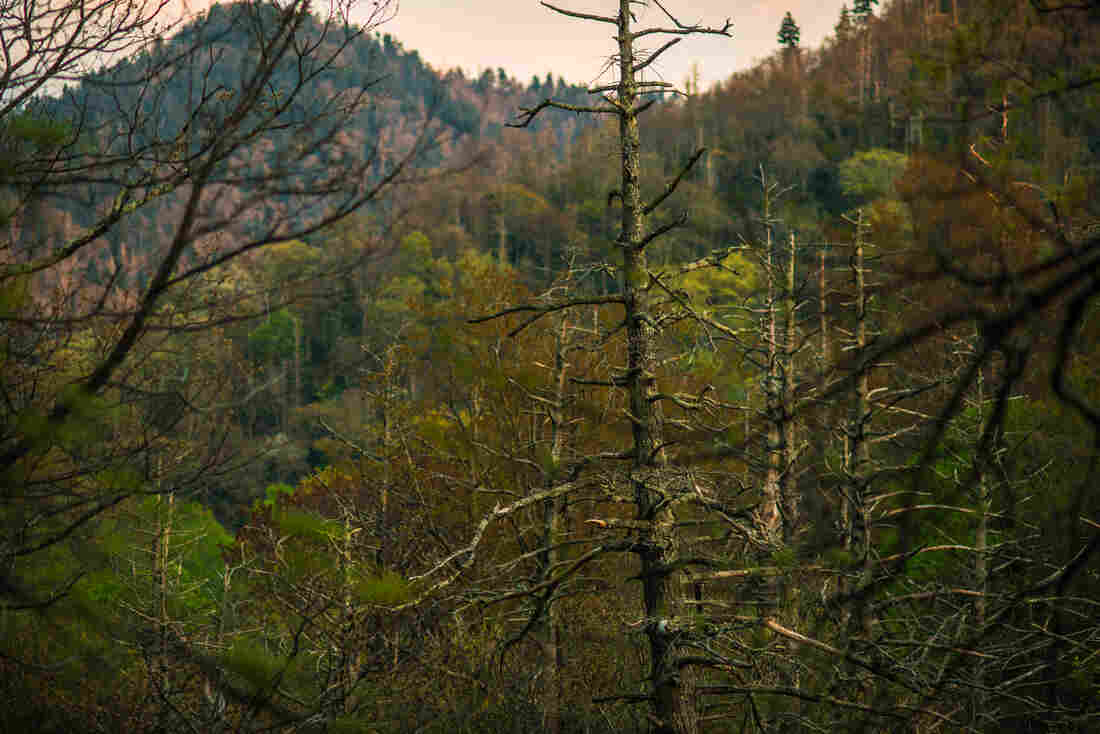 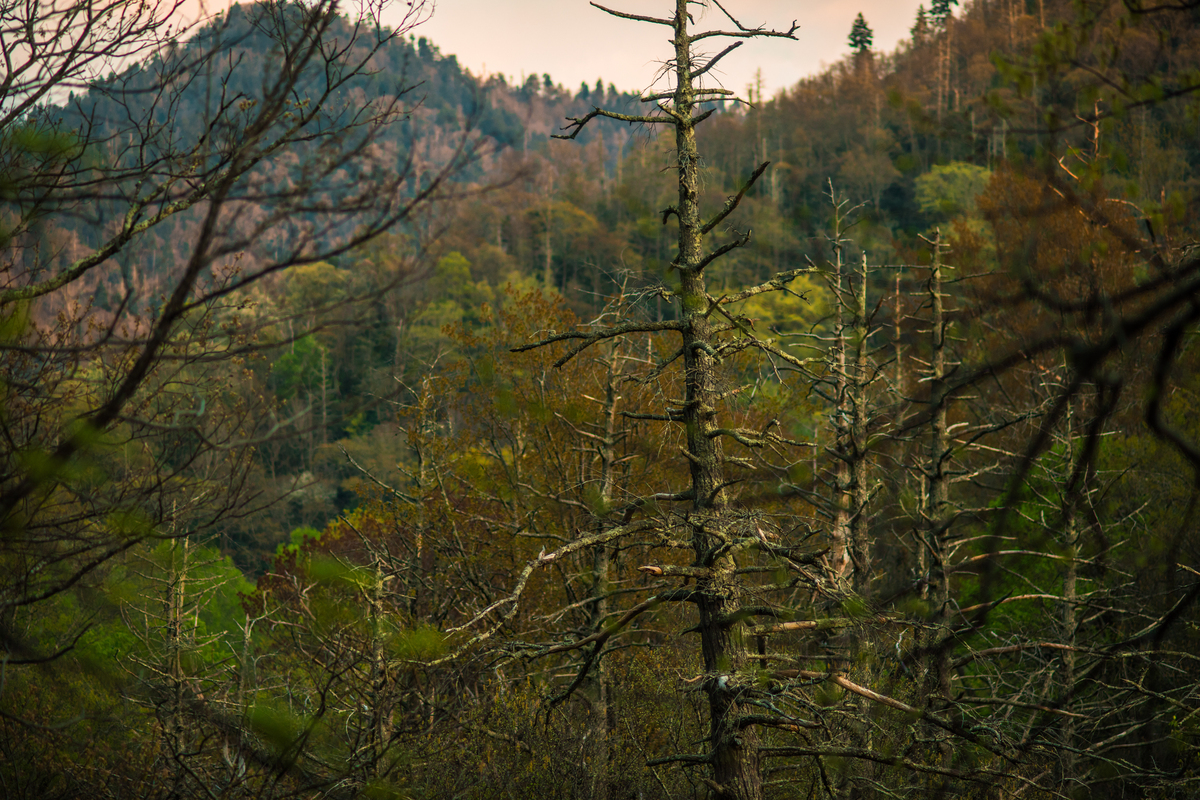 Stands of dead hemlock trees can be seen at Great Smoky Mountains National Park in Tennessee.

The forest at Great Smoky Mountains National Park is sick, infected by invasive bugs and plants. Matt Moore, Kaleb Lique Naitove and Emily Baird of the National Park Service are some of the field medics trying to keep it alive.

"We're out here trying to save trees," says Moore, a seasonal forestry tech, as he steps over downed logs and through thick patches of rhododendron on the Tennessee side of Great Smoky Mountains National Park. Moore and his colleagues work on the park's vegetation management crew, veg crew for short. They carry plastic buckets filled with their "medical supplies" — a bicycle pump, a tangle of tubing and Kool-Aid-blue and candy apple-red pesticides.

The forest they walk through is mesmerizing. The trees glow green in the Tennessee sun. There are a lot of tree species in this forest, but the one they're looking to treat is an Eastern hemlock, an evergreen conifer that ranges from Canada to northern Mississippi. Hemlocks make up a significant portion of a lot of forests in the eastern U.S., but particularly so in Great Smoky Mountains National Park. 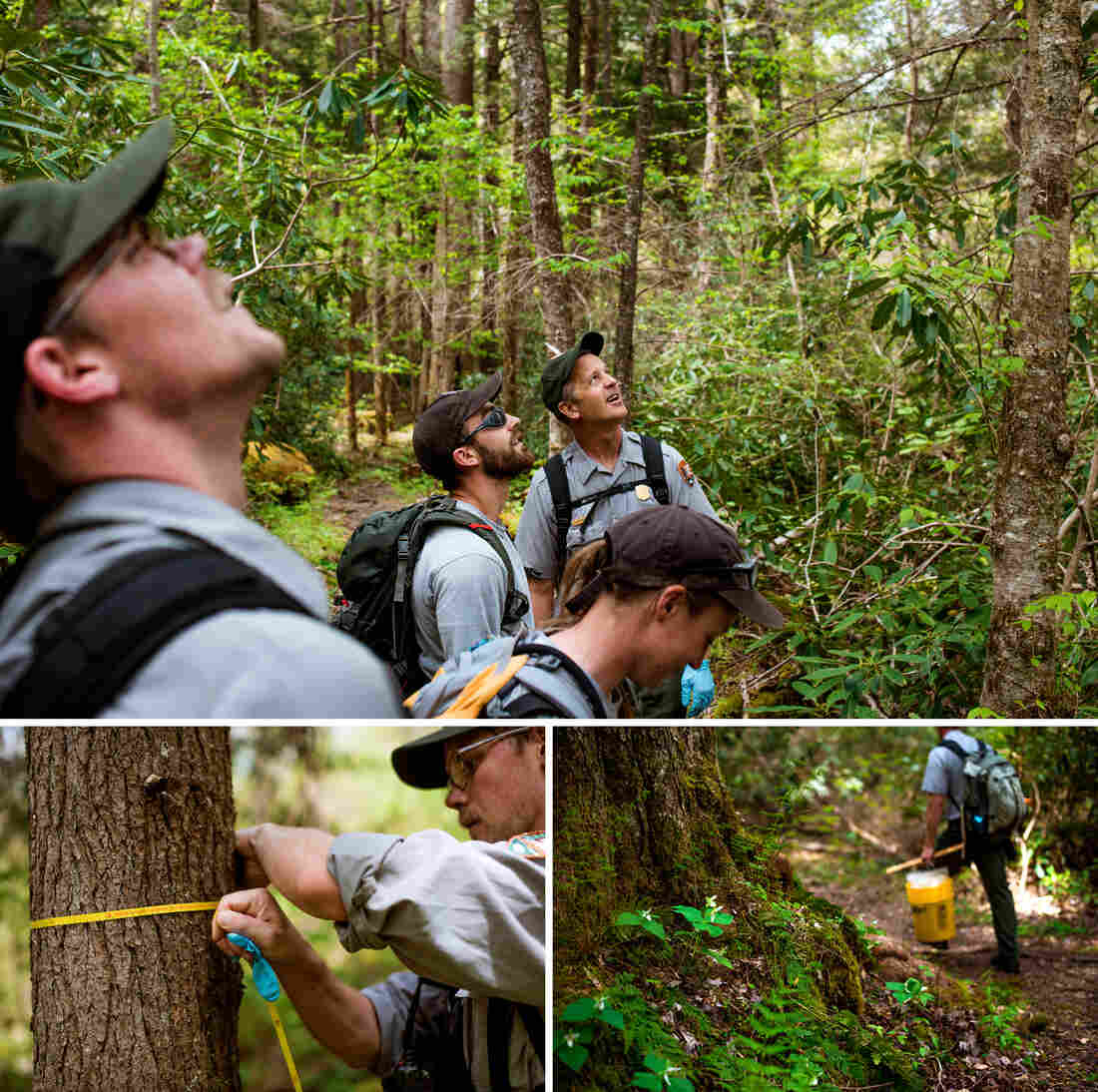 (Top) Jesse Webster and the Great Smokies vegetation crew survey a healthy old growth hemlock forest. (Left) Matt Moore measures a hemlock tree to determine the amount of chemical needed to treat it for the aphid-like hemlock woolly adelgid. (Right) The Great Smokies vegetation crew hikes to a remote tree to treat it. The plants in the foreground are a sign of a healthy old-growth forest. Mike Belleme for NPR hide caption

"One out of every five trees in the Smokies is a hemlock currently," says Jesse Webster, head of the veg crew.

Hemlocks are hugely important to those forests and ecosystems. It is "a foundational species," Webster says. They're like lions, wolves or sea otters – keystone species that have an outsized impact on the ecosystem around them. Hemlocks provide a lot of shade, which means "they moderate the highs and lows of air and water temperature," he says. By moderating those temperatures, they provide good habitat for other plant species and for birds, insects and trout.

It's a different landscape without them. And there's plenty of evidence of that in the park. As the crew hikes, they point out a swath of forest across the ridge where the hemlocks were not treated. "They were too far gone," Webster says. Nearly all of the trees are dead and the sun is pouring through and past their skeletal tops to the forest floor below. The ground there would be hot, Moore says. "And then there's these nice spots where most of the hemlocks are still alive, and it's shady and cool." 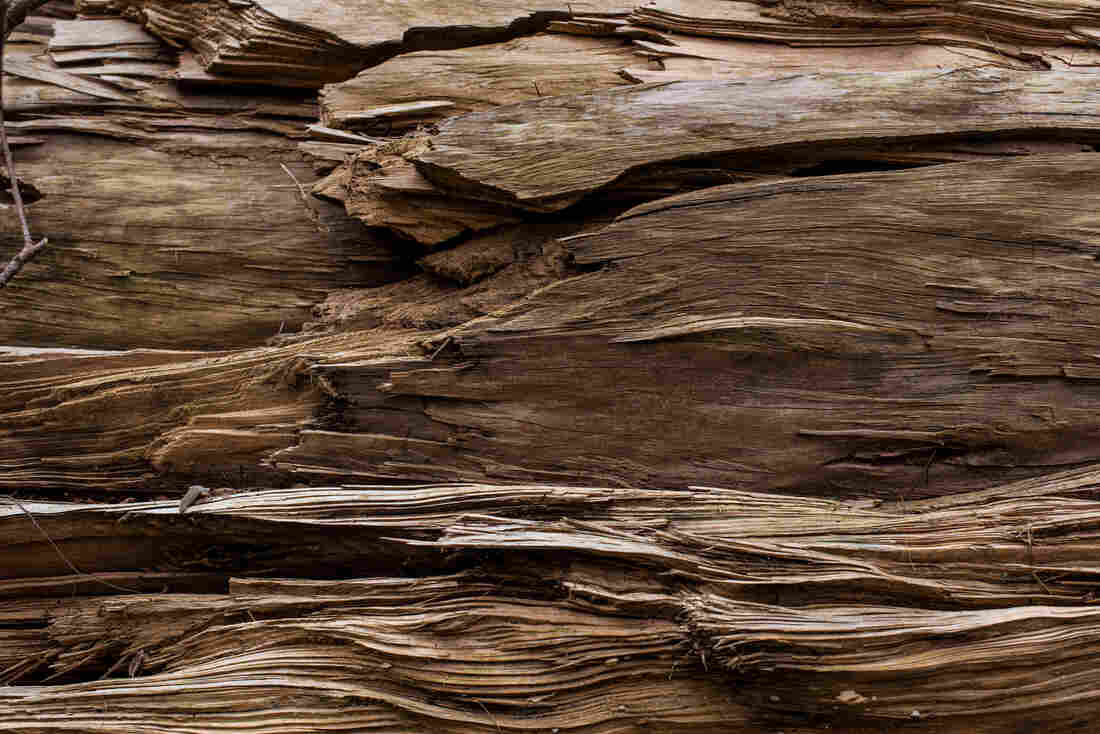 Without the work of the veg crew, that sunny, hot picture Moore describes would be the norm in the park and across the eastern U.S.

"They'd still exist in an arboretum or in someone's backyard," Webster says. "But outside of that, you know, we're looking at a complete ecological extinction on our landscape."

So the veg crew is out here helping Hemlocks one by one, with pesticides and an invasive insect to help kill the reason these trees are sick: a little aphid-like bug called the hemlock woolly adelgid.

'A Tsunami Wave' Of Adelgids

After about 20 minutes of hiking off-trail in the park, Moore and company reach the tree they've been looking for. It's tall, but not particularly big. You could wrap your arms around its trunk and still clasp your hands. By all outward appearances, it's healthy.

It's time for the crew to start helping the tree by injecting it with pesticide. Moore drills holes around the tree's base and then Lique Naitove and Baird attach tubing. A bicycle pump connected to the tube system begins to fill it and then the base of the tree with the red pesticide.

It's called a tree injection system. "We call them IVs," Webster says. "They're out doing a tree IV." 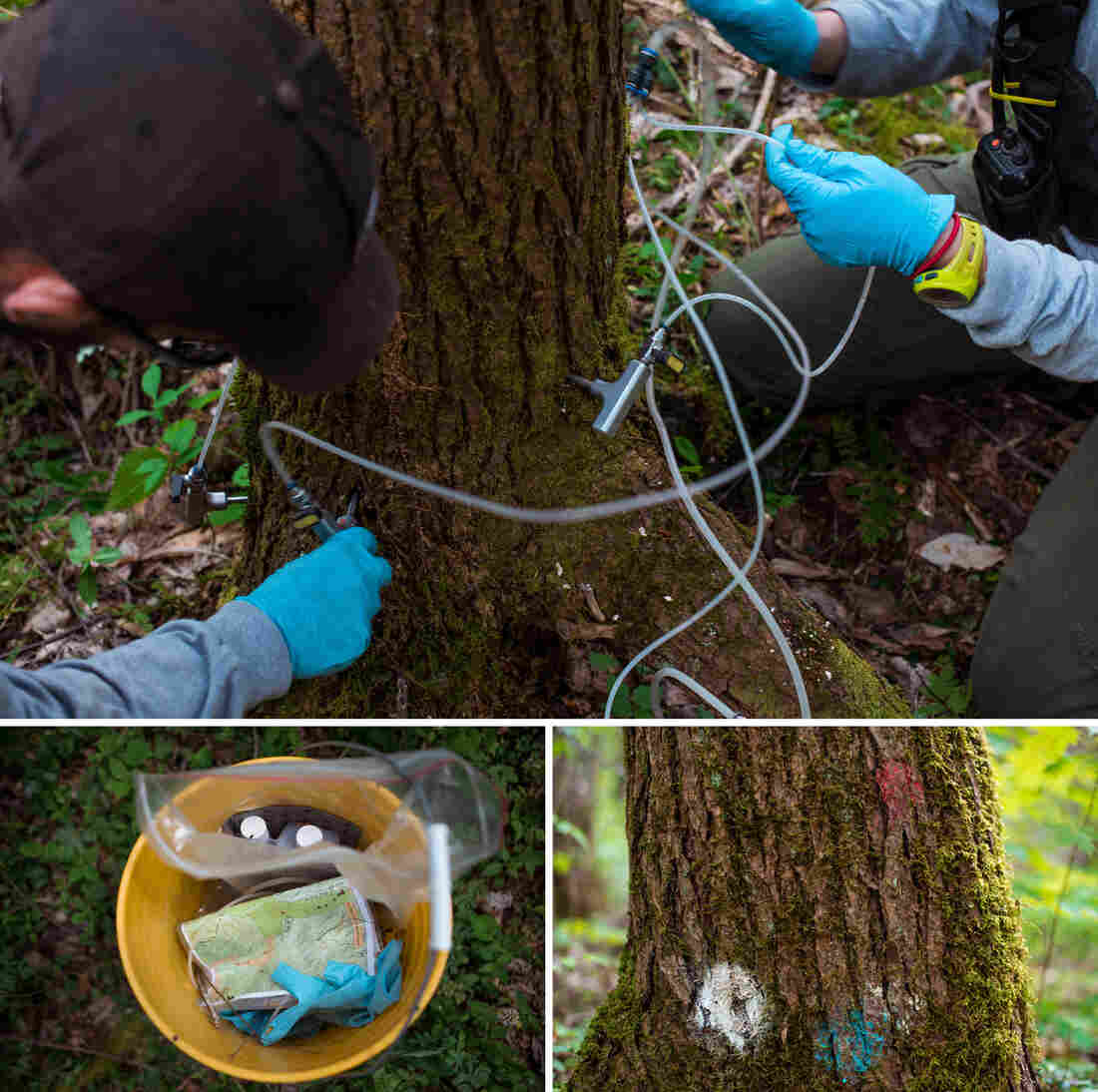 (Top) A hemlock tree is treated with a tree injection system - or tree IV - that delivers a chemical that kills the invasive aphid-like woolly adelgid. (Left) Supplies used to treat the hemlock trees are carried in plastic tubs. (Right) A hemlock tree is marked after being treated with an IV of a chemical that kills the invasive aphid. Trees need to be treated every 5-7 years. Mike Belleme for NPR hide caption

It's like a flu shot that will help the tree ward off invasive bugs. Most of the trees Webster's crew treat just get sprayed with pesticides that have the same effect. This one's different because it's near a stream and the crew doesn't want pesticides getting in the water.

They can't do it for all of the trees they treat because there are just too many. The vegetation crew here has treated more than a quarter million trees in the Great Smoky Mountains. The treated ones, like the one they hiked to, are easy to spot because they look healthy and are alive. The trees that weren't treated are probably dead "or they're close or on the way out very soon," Webster says. "Probably in the next 10 years." 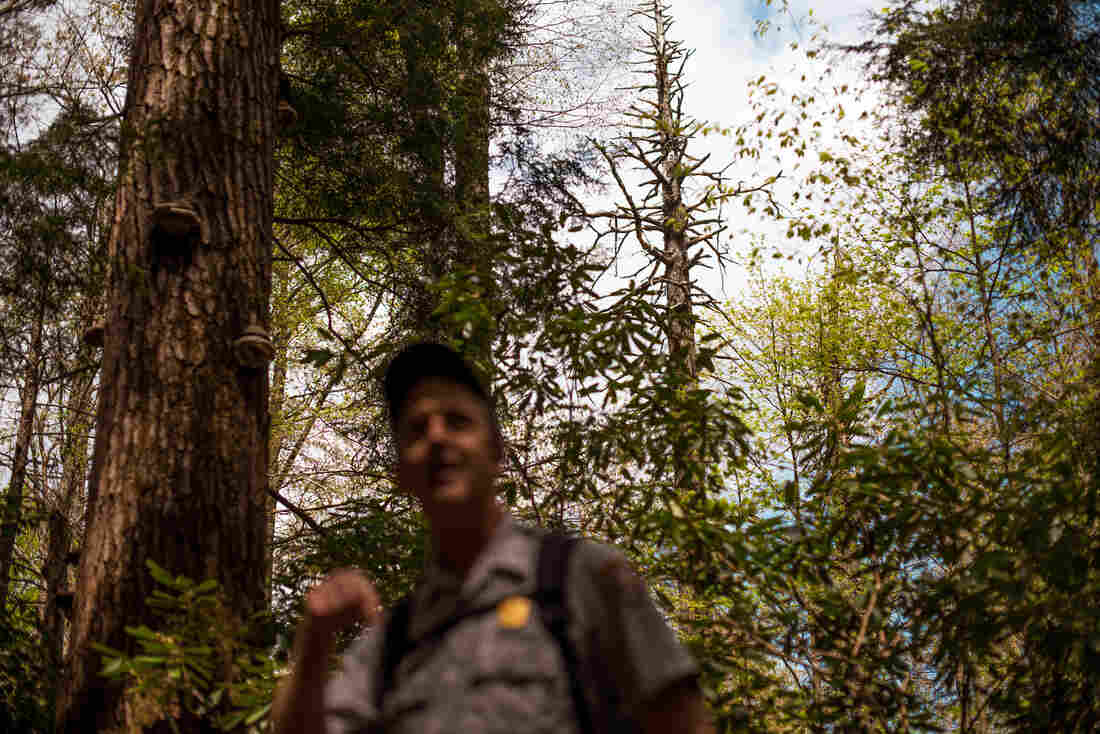 Not every tree can be saved. The tree behind Jesse Webster is the first hemlock he ever treated —and it died. But the old growth hemlock forest surrounding it is considered a success for the park service. Mike Belleme for NPR hide caption

The reason for this die-off is the hemlock woolly adelgid, which is native to Asia. Scientists believe that the specific kind killing the Eastern hemlock is from southern Japan.

Adelgids were first discovered in the U.S. in the 1920s. They were transported overseas by humans and continue to be spread with human help, mostly through the purchasing, selling and transporting of firewood. Today, the hemlock woolly adelgid is established in 16 states, from Maine to Georgia.

The trees at Great Smoky Mountains National Park have been infested with adelgids for longer than a decade. With no natural predators and no evolved defenses, the adelgids swept through the hemlocks at the park like "a tsunami wave," Webster says. Many of the park's hemlocks died quickly; others are dying more slowly.

Hemlocks aren't the only tree or species in the park that's dealing with such threats. Balsam woolly adelgids are attacking Fraser firs. Ash trees are being killed off by the emerald ash borer. Kudzu, a fast-growing Asian vine, is choking off trees. More than 350 species of invasive plants have been found or identified in Great Smoky Mountains National Park. Most of those don't pose serious threats to native species, but the ones that do, the veg crew manages. Almost none pose the same level of threat as the hemlock woolly adelgid. 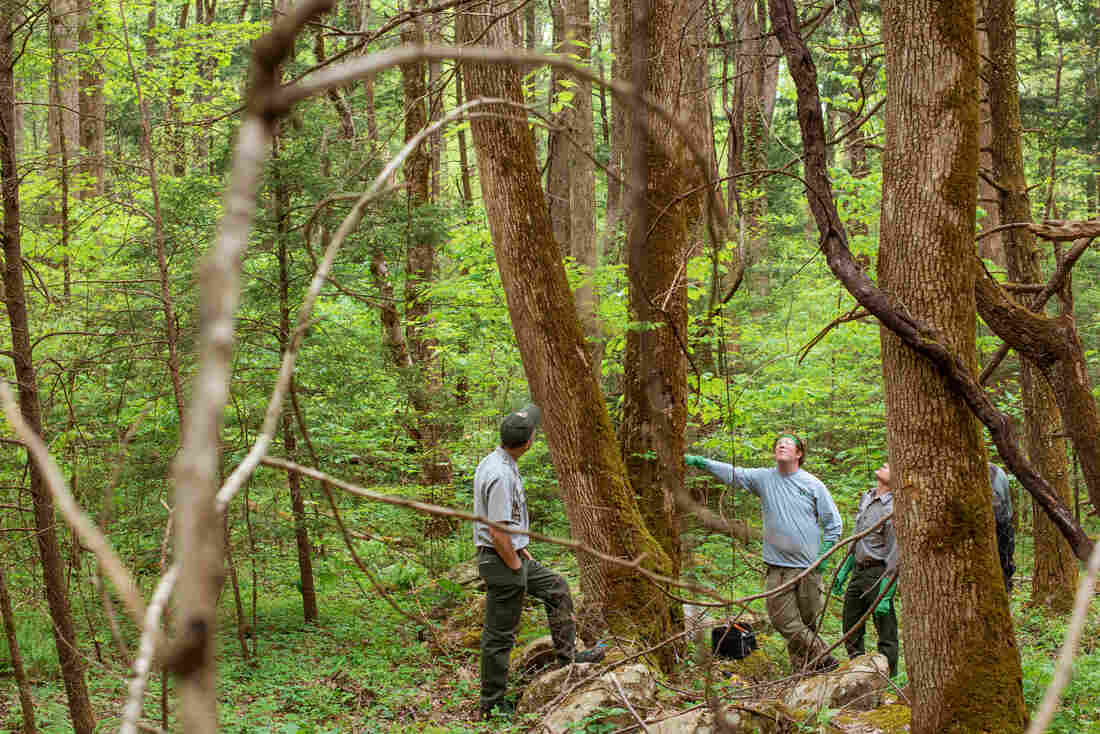 Dalton Hyde (center right) and Glenn Taylor, members of the Great Smokies vegetation crew, work to rescue white ash trees from the emerald ash borer, an aggressive beetle that is threatening the ash trees at Great Smoky Mountains National Park and across the east. Mike Belleme for NPR hide caption

The bug's infestations are so widespread that they're easy to find in the park. Webster walks down a path near Gatlinburg, Tenn., and grabs the branch of a young hemlock. "Here's the wee beastie," he says, pointing to a speckling of little white cotton-like globules clustered at the bases of needles on the tree's outermost branches. "Each light, fluffy mass you're seeing is an ova sack," he says. Inside is anywhere from 30-60 adelgid eggs.

Under a microscope, the little light, fluffy mass looks like a cotton ball. The wool is a defense for the adelgid and is where the critter gets its name. Webster picks at one of the balls with a tweezer-like tool, pulling away tufts of wool, revealing a little cluster of eggs that look like tiny grapes. 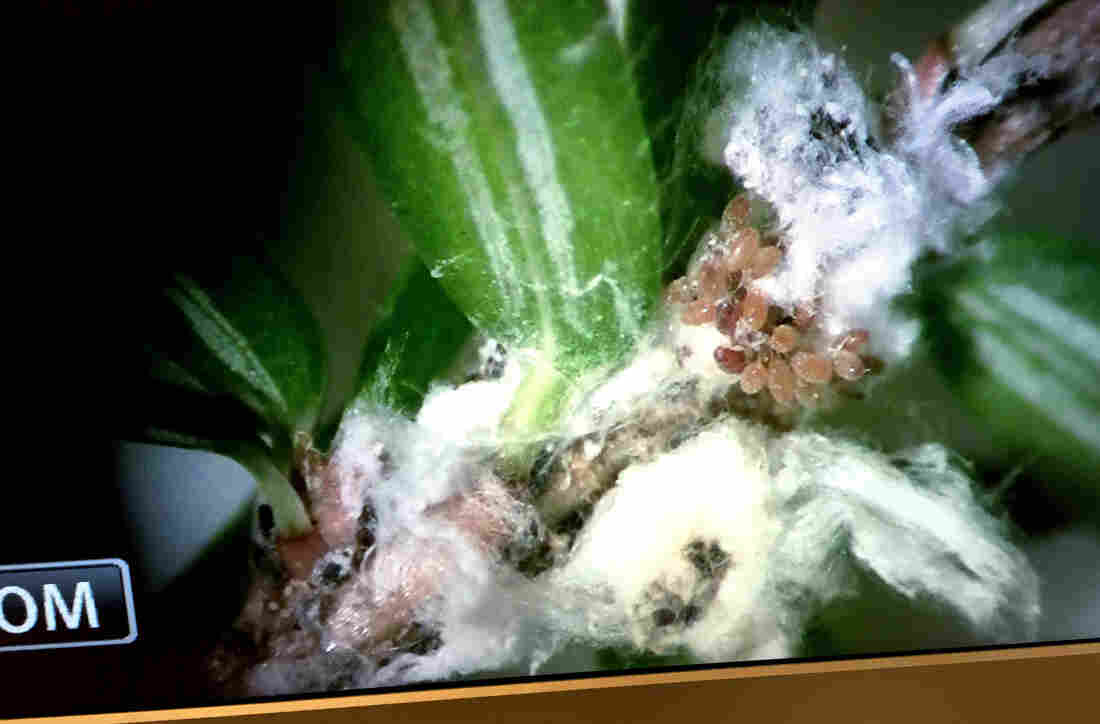 There's also a full-grown female adelgid, the mother, nested in the wool. She's mostly dead, Webster says. To the naked eye, she'd be no bigger than a speck of dust, but magnified you can see that she's attached herself to the base of the hemlock's needle. From there, she feeds off of the tree's nutrients, keeping them from the tree itself. It doesn't seem like a lot, but if you multiply this across hundreds or thousands of needles, you have a starved, soon-to-be-dead tree. Multiply it by millions, and you have a dying forest.

The pesticide treatment that the park's vegetation crew uses doesn't get rid of the hemlock woolly adelgid. It protects the tree that gets it and only lasts five to seven years. "It's a stopgap solution," Webster says.

Because of that, the National Park Service and scientists have been trying a longer-lasting one: predator beetles. The hemlock woolly adelgid, like most invasive species, thrives in its new environment because it doesn't have any natural predators. To change that dynamic, Great Smoky Mountains National Park has brought in a few species of predator beetles from Asia that they're raising at insectaries, or nurseries for bugs. 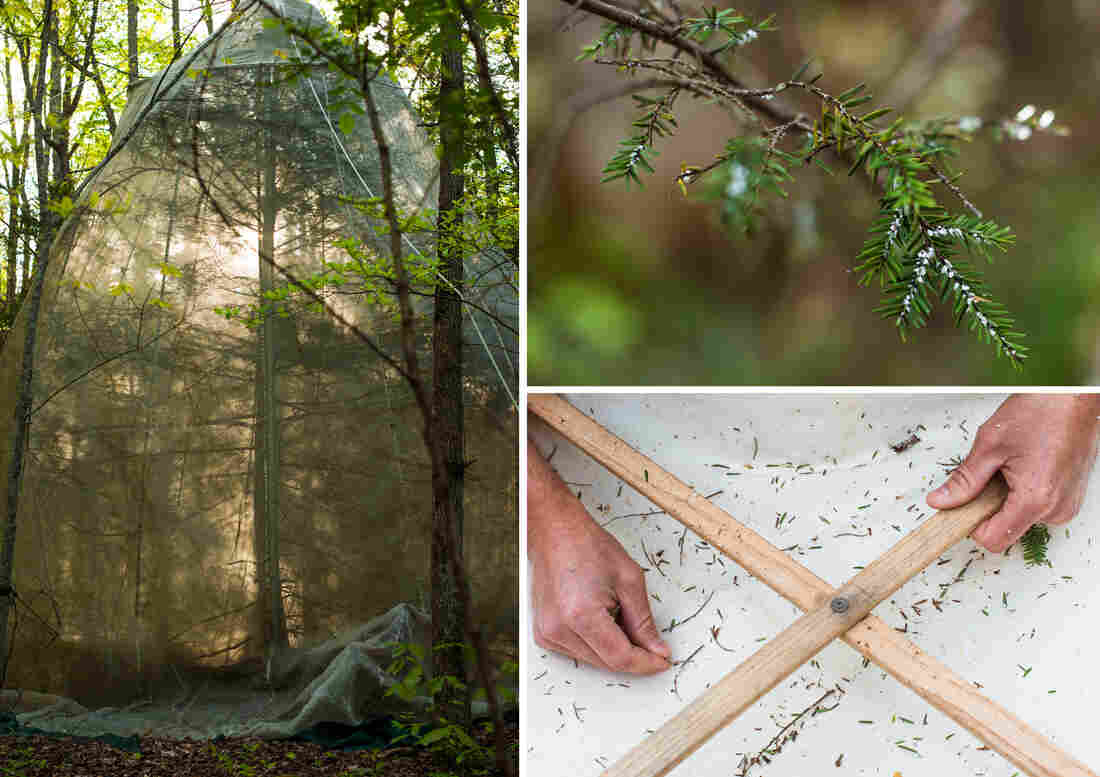 (Left) A hemlock tree is covered in a net to monitor and breed a predator beetle that the park service is using to fight off the adelgid. (Top) The hemlock woolly adelgid gets its name for the white woolly clusters it makes on a hemlock tree's branch. (Bottom) Jesse Webster, head of the Great Smoky Mountain National Park vegetation crew, collects samples to monitor predator beetle populations. Mike Belleme for NPR hide caption

Webster knocks on the branches of an infected hemlock at one insectary and holds a canvas sheet underneath. Spiders, needles and little specks fall off. He looks over the canvas and touches at a little shape with a pine needle. "This is the baby predator beetle," he says. "This is a laricobius."

The beetle isn't some fanged, wicked-looking predator. It's the size of a pinhead and looks a bit like a roly poly bug. Webster knows that it doesn't inspire confidence to have such a tiny aspiring equalizer. "Well look at the adelgid," he says. "They're smaller than these."

The National Park Service has been criticized for introducing another non-native species into the park. Some scientists and environmentalists argue that predator beetles could cause more problems than they fix. Entomologists and scientists tested the predator beetles with other native species to see if there would be other effects, but it's impossible to know in a short time-frame. There are many examples of humans introducing one new species to curb the growth of another and it going wrong.

The problem of the hemlock woolly adelgid is so dire though that it was deemed necessary to ensure the survival of the hemlock. "I'd rather do something than do nothing," Webster says. "Really, we're trying to set up that natural predator-prey balance, a sustainable system and then back away."

Predator beetles will never eradicate the hemlock woolly adelgid. They're here to stay. The hope of the Park Service is that by creating that balance between predator and prey and by educating people to not move firewood from one location to another, they can slow the spread of the adelgid enough to give the remaining Eastern hemlocks a chance to survive and adapt. 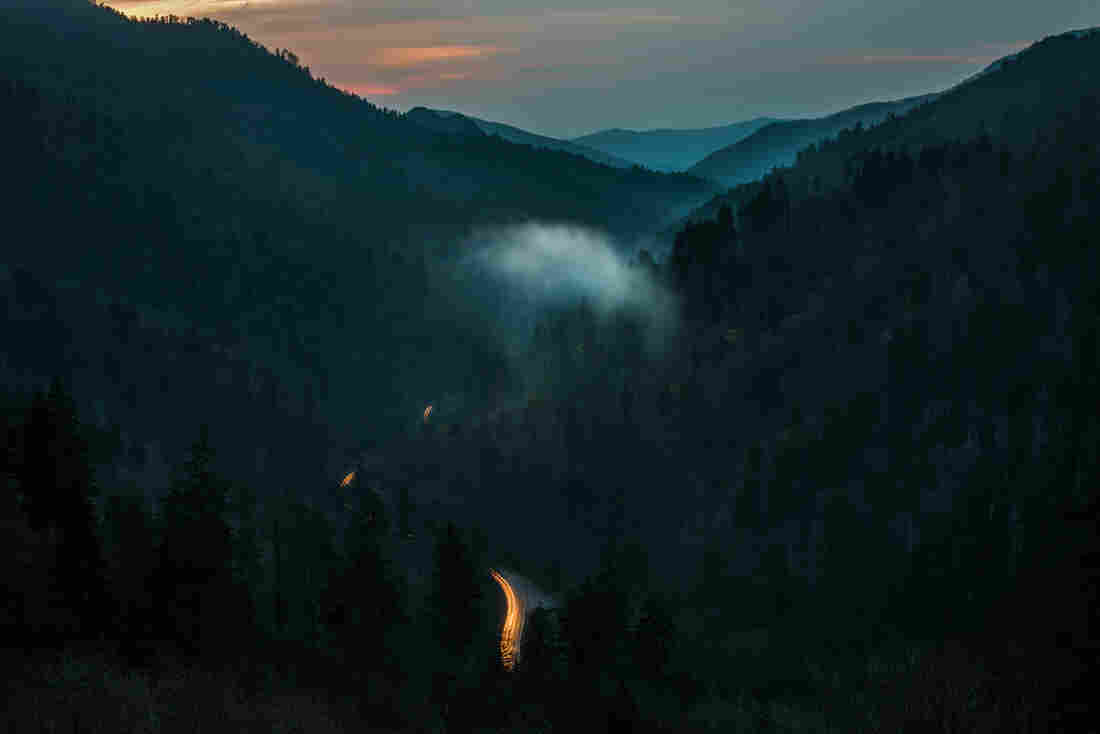 Many dead hemlock trees can be seen from an overlook at Great Smoky Mountains National Park on its Tennessee side. Mike Belleme for NPR hide caption

In an earlier Web version of this story, we mistakenly used the term "etymologists"; we meant "entomologists."