Accessibility links
Trump University Promised To Help People Profit Off The Foreclosure Crisis Internal documents show how Trump University offered advice on how to exploit the "Great Recession" that peaked in 2008 and caused housing prices to plummet. 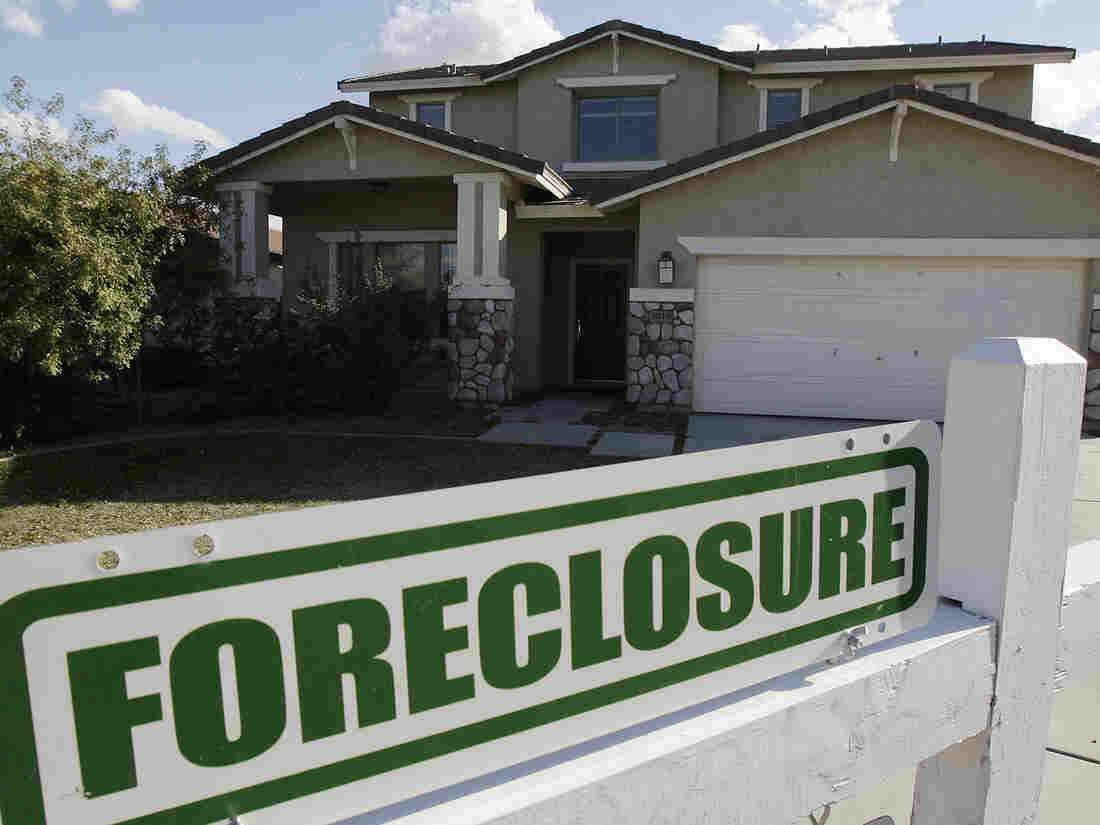 Arizona had one of the nation's highest foreclosure rates during the 2008 recession. That year, Trump University tempted Phoenix residents to make money off those foreclosures. Ross D. Franklin/AP hide caption 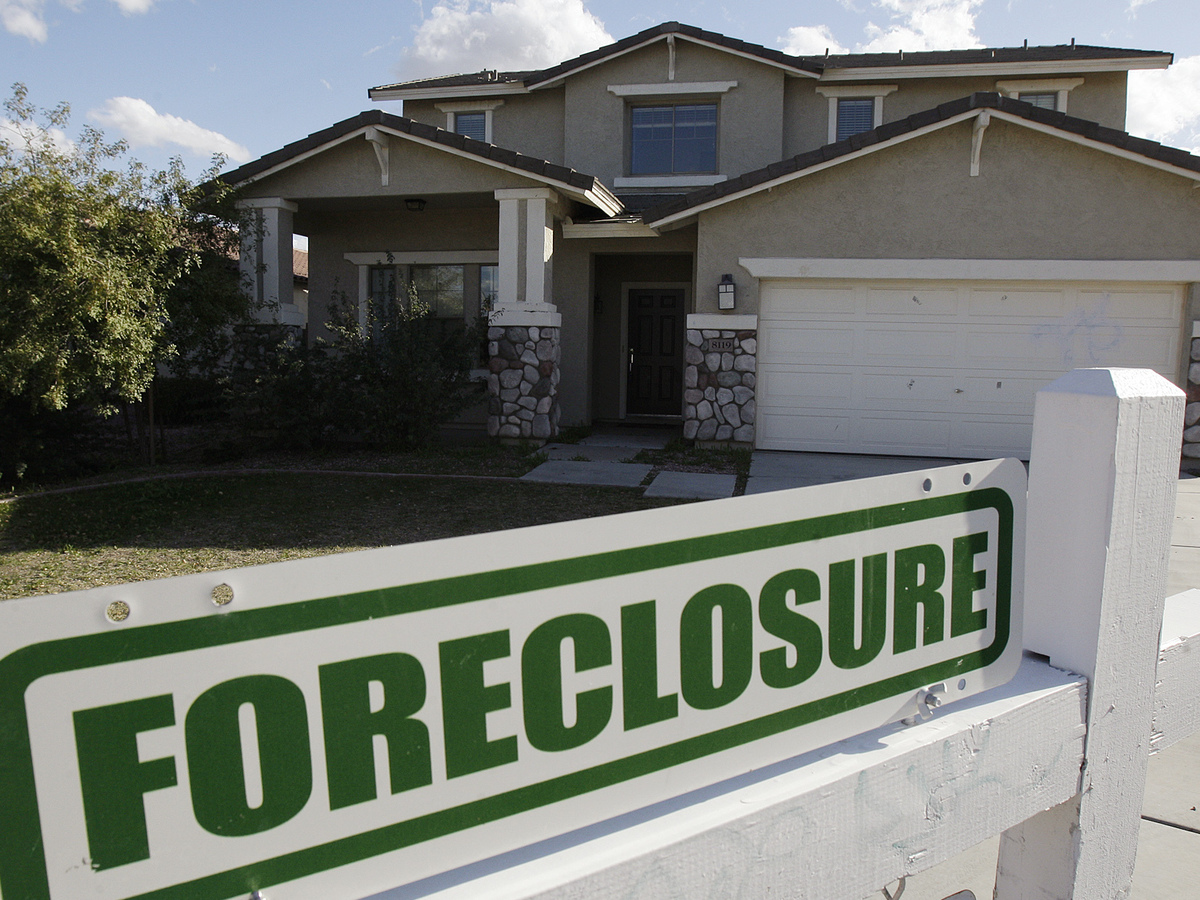 Arizona had one of the nation's highest foreclosure rates during the 2008 recession. That year, Trump University tempted Phoenix residents to make money off those foreclosures.

Picture this. An email pops into your inbox. It promises to help you "make some real money and live the kind of life that you thought was only for 'rich' people." To help you "spend your life living it your way."

The pitch sounds promising, because it's December 2008, and the economy has collapsed all around you.

The stock market has tanked, major financial firms have gone under, and the federal government has just begun to enact an unprecedented $700 billion bailout in order to keep credit flowing through the financial sector. In Phoenix, Ariz., where you live, neighbors are being forced out of their homes due to foreclosure filings.

"The secret of success in life is for a man to be ready for his opportunity when it comes," the email reads, next to a large image of billionaire Donald J. Trump. "Are you ready?"

This one class, how to profit from foreclosures, will get you started on the clearest, sure-fire, money-making opportunity available in a long, long time.

This was the initial pitch for a 90-minute session that functioned as a gateway to Trump University. Documents unsealed by a federal judge this week reveal the aggressive sales techniques Trump University employed to get people to fork over thousands — sometimes tens of thousands — of dollars for real estate webinars, retreats and audio courses. The internal documents also show how Trump University offered advice on how to profit off the "Great Recession" that peaked in 2008 and caused housing prices to plummet.

The specific opportunity Trump University was tempting Phoenix-area people with in those 2008 sessions: how to make money off of those foreclosures that were spiking at record levels in 2008, after the collapse of the housing market and the subprime loan system that had artificially puffed it up.

"This one class, how to profit from foreclosures, will get you started on the clearest, sure-fire, money-making opportunity available in a long, long time."

There were a lot of "opportunities" in and around Phoenix at that time: Arizona had the third-highest rate of foreclosures in the country that year, with one in 22 homes receiving a foreclosure filing, according to Realtytrac. 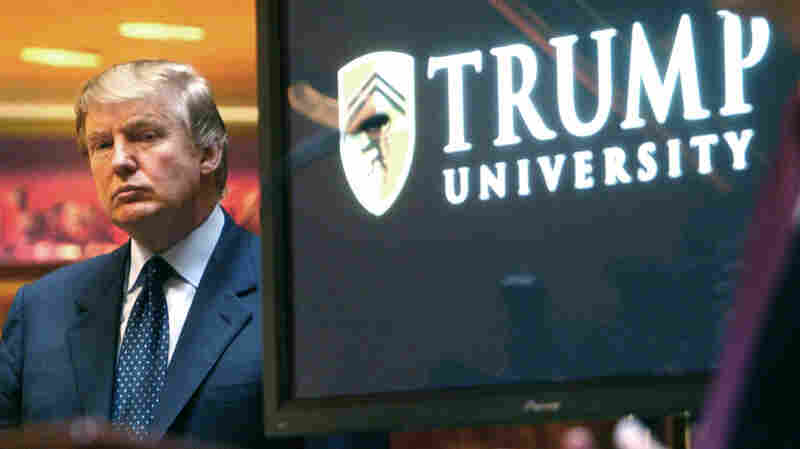 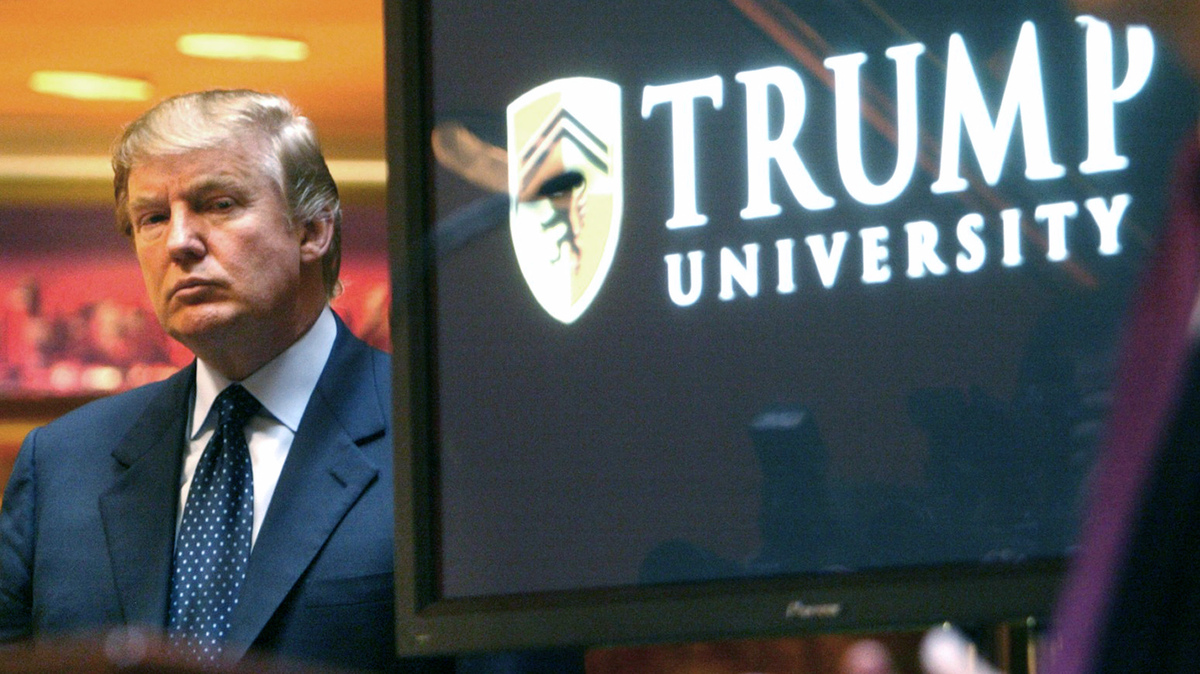 Donald Trump announcing the start of his Trump University venture in 2005.

Over the next few weeks, more emails would arrive. "Thousands of properties are available for pennies on the dollar," one reads.

"In today's down market I'm telling people to buy, buy, buy," reads a mailer signed by Trump himself. "Banks are selling foreclosed properties at pennies on the dollar."

"Your dreams are all you need, and all that is required to sign up for this free class," the first email, from Trump University president Michael Sexton, ends.

That wasn't quite true, because Trump University was also eyeing an opportunity. The seminars were a sales pitch with a goal of bringing in at least $54,000 from attendees who signed up for future courses. Trump University staff planned the events down to the meticulous detail, printing out diagrams of where, exactly, U.S. and state flags should be displayed, what employees should be doing every single minute of the event, and how, exactly, staffers should, as the document put it, "set the hook" for the eventual sale.

"Let them know that you've found an answer to their problems and a way for them to change their lifestyle," the document suggests. "Watch for body signals."

And once buyers have been identified and have filled out the forms, "the team should go through each profile and determine who has the most and least liquid assets," and then rank them in order.

"401Ks and IRA should not be considered when using the ranking system since these are not liquid, available cash."

After that came the one-on-one sales pitches. "You must be very aggressive during these conversations in order to push them out of their comfort zone," the note to employees reads. "If they complain about the price, remind them that Trump is the BEST!! This is the last real estate investment they will ever need to make!!"

The documents — part of an ongoing federal lawsuit filed by former Trump University students — provide a window into Trump's business world. While Trump had many other business dealings going on at the time, he held an equity interest of more than 90 percent in the for-profit school, according to deposition testimony from partner and former Trump University president, Michael Sexton.

Trump University was not a university in the typical sense of the word. It did not offer degrees or professional accreditation.

Trump has repeatedly defended Trump University against both lawsuits and general criticism. He has also repeatedly cited the school's high satisfaction ratings from former students. He launched a website, 98percentapproval.com, in the wake of an initial lawsuit filed against the business by New York Attorney General Eric Schneiderman.

On Thursday, Trump tweeted: "I have thousand of great reviews & will win case!" He also promised to reopen Trump University:

After the litigation is disposed of and the case won, I have instructed my execs to open Trump U(?), so much interest in it! I will be pres.

Still, the Trump University documents will provide a gold mine of opposition research for Democratic groups preparing general election ads. In 2012, a series of well-financed ads by the Priorities USA superPAC villainized Mitt Romney as a coldhearted businessman who valued profits over employees' jobs. Its most high-profile spot told the story of a man who was told to build a stage for an event at his company, which Romney's Bain Capital had recently acquired.

When employees gathered for a meeting, a group of executives took the stage and announced that everyone there would be laid off. "It was like building my own coffin," the worker dramatically told the camera at the end of the spot.

Given how effective that line of attack ended up being, it's not hard to imagine how Democrats could frame a course catalog promising tips on how to profit from the Great Recession's foreclosures, or employee handbooks schooling Trump University employees on how to urge people to max out their credit limits. (Three-day courses on both topics were available for about $5,000 each.)

"We teach the technique of using OPM ... Other People's Money," one sales "playbook" suggests as a possible talking point for salesmen. "What most people do is handle the tuition by putting it on their credit cards because it gives them the ability to make very small monthly payments and maintain a low overhead to run their real estate project."

If they complain about the price, remind them that Trump is the BEST!!

The preparation guide for the Phoenix seminars warns employees against saying thank you to attendees. "Always remember that we have solutions for the attendees," it reads. "They are not doing us a favor by showing up for a free seminar. The person who says, 'you are welcome' has the posture. We want them thanking us."

A separate "playbook" for telemarketers maps out a "roller coaster of emotions" that a salesman should walk a client through.

In the introduction, the goal is to "get them excited about their dreams again but also realize they still haven't taken any steps to accomplish them."

That and the "blast" set up the "probe" portion of the call, where the telemarketer asks for information about a person's personal finances, including credit card balances and limits, mortgages, auto loans and retirement fund totals.

"Most people are not comfortable talking about their personal finances," the playbook reads. "Why? Because very few have done anything with their finances worth bragging about."

It suggests that salesmen "should always stroke their ego when they have done anything right."

If someone pushes back, asking why the salesman wants all this personal information, the playbook suggests this response: "we have a saying around here. If you want to be terrific, you've got to be specific. Why don't you pull your credit card statements so we can see exactly what interest rates you are being charged."

The scripts are laden with false exclusivity, as well. If a person asks what he's being sold, the suggested response is this: "Just to be clear about my role here (name), my role is that of a screener. I'm an interviewer ... my job is to find the serious from the curious. Where would you say you are?"

"This is not something we offer to just anyone. We don't want to work with just anyone," the sales script reads at another point. "You know who my boss is, right?"

If potential buyers were still on the fence, the playbook offered another response that may sound familiar to anyone following the 2016 presidential campaign.

"Let me ask you, (name), is everything Donald Trump does, the BEST? He wouldn't put his name on this, if it wasn't, right?"