Accessibility links
Politics In Real Life: The Struggle To Pay For College Loans and grants often aren't enough to cover all the expenses of a college education. For many students the struggle to afford school means long work hours and even skipping meals. 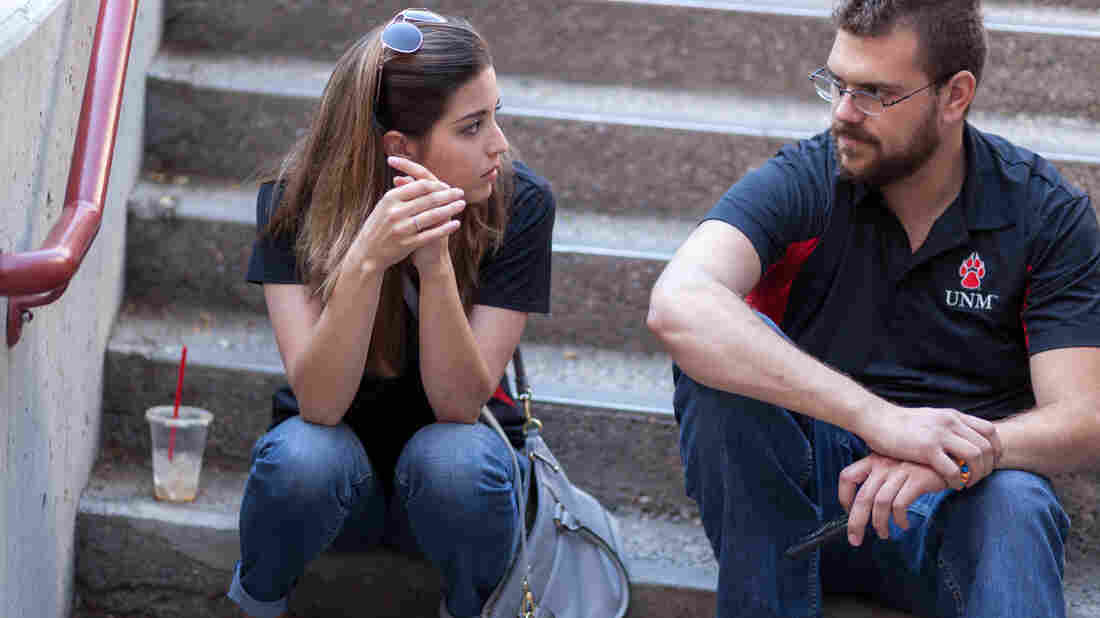 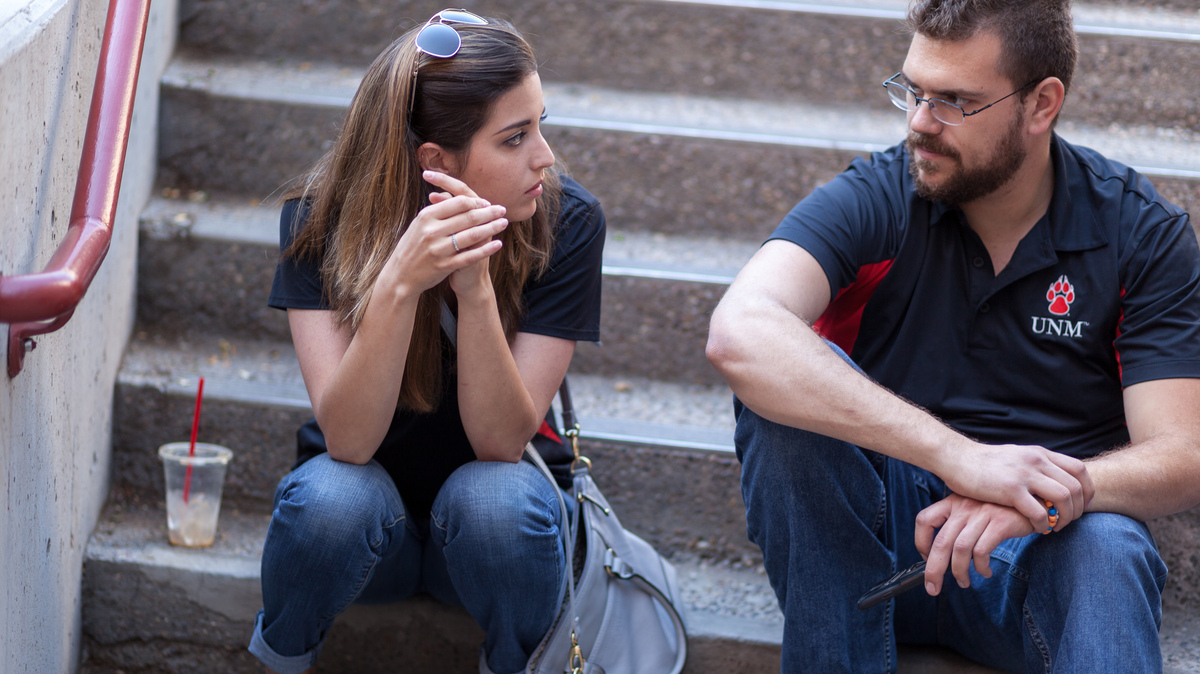 University of New Mexico students Monica Nezzer and Patrick Arite work 15 to 30 hours per week giving campus tours in order to help put themselves through college.

Monica Nezzer, 22, is a full-time student studying psychology and biology at the University of New Mexico in Albuquerque. She describes herself as "fortunate." But in addition to a full course load, she's working about 30 hours a week as a campus tour guide and recruitment specialist.

"At least once a semester, I face a time where I am like, 'I am broke. I am stressed. I am exhausted.' And I don't know how I'm going to make it through the rest of the semester," said Nezzer.

Compared to some other four-year public universities, the University of New Mexico is affordable. Tuition and fees are about $7,000 a year, and about a third of the students receive a lottery scholarship from the state which covers most of their tuition costs. And yet many students struggle to cover all their expenses.

L: Monica Nezzer spreads cream-cheese on her bagel, a quick breakfast before starting work. R: Monica Nezzer and Patrick Arite peek over a wall while waiting for an introduction to a group of prospective students. Steven St. John for NPR hide caption

In addition to tuition, which isn't entirely covered by the scholarship, Nezzer says she is "paying rent, on top of paying for books, school supplies, things like that. Commuting costs."

Nezzer takes out student loans to cover her housing. Her $9.50-an-hour campus job is how she pays the rest of her living expenses.

College affordability and student loan debt have been big issues on the campaign trail this year, especially in the Democratic presidential primaries. Bernie Sanders has called for free public college. Hillary Clinton proposes debt-free college. But the challenge is much deeper than simply covering tuition.

Working As Much As Possible, Possibly Too Much

Nezzer says she tries to arrange her class schedule to maximize the time available for work. The limitation, she says, isn't finding time to study. It's fitting in the work she needs to stay afloat while still making it to class.

Patrick Arite, 25, knows well the stress his co-worker Monica Nezzer is talking about. He says he experiences it most acutely at that time each semester when his final tuition payment is due and he isn't sure he has the money to cover it.

"They come and they are like, 'All right. You have X amount of debt and you have to pay that off or else you get dropped from your classes,'" he said.

And he's turned to some surprising things to raise the cash.

"I do, like, farm work during the summer," said Arite. "Stuff like that. Uh, once in a while, I've done the uh, cell plasma—that's classic college option."

It turns out, in a pinch, selling your blood plasma is good for a quick $30, he said.

Other students are literally choosing between food and books.

Each month the Lobo Food Pantry distributes free groceries to UNM students and families — more than 1,000 distributions in 2015. 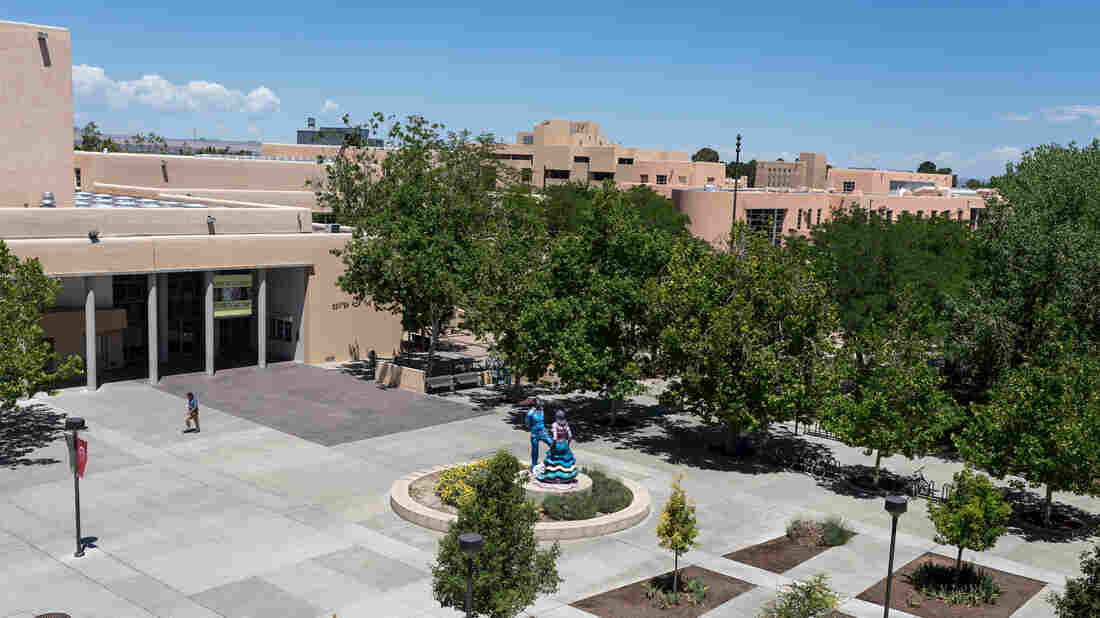 A man walks past the sculpture "Fiesta Dancers" by Luis Jimenez, outside the Popejoy Hall performing arts center on the central campus of the University of New Mexico in Albuquerque. Steven St. John for NPR hide caption 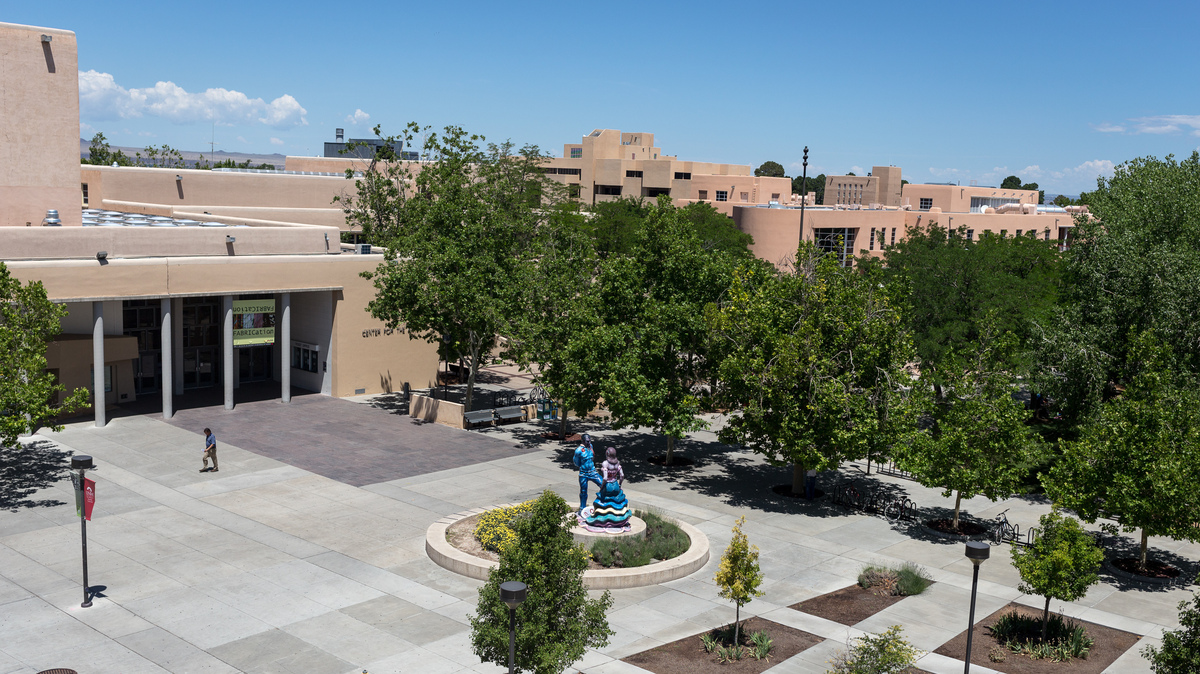 A man walks past the sculpture "Fiesta Dancers" by Luis Jimenez, outside the Popejoy Hall performing arts center on the central campus of the University of New Mexico in Albuquerque.

A nationwide consortium of food banks says ten percent of adults they serve are in college. That's three million college students a year going to food pantries so they don't go hungry.

Many students also work so much that they jeopardize their ability to stay in school.

Corine Gonzales works at the University of New Mexico as a retention specialist. She looks for students who are at risk of losing their scholarship eligibility, because if they do they are more likely to drop out. She recounted one recent example, a student whose grades and course load had slipped.

"She was working the graveyard shift at Walmart," Gonzales said. "And I was like, 'God, this poor girl. She works all night. Gets off at 7. Comes to class at 9, 'til whatever, 12, and then, you know, probably dead tired after that."

You don't work the graveyard shift at Walmart while going to college just for fun. Gonzales says the young woman was able to turn things around and keep her scholarship. But not all students make it, and those who quit college before they get their diploma are left with debt and nothing to show for it.

A 2015 survey of college students found 34 percent of first-year students and 38 percent of seniors said economic concerns affected their academic performance. A survey by Ohio State researchers found 60 percent of students said they were concerned they wouldn't be able to continue paying for school.

How Would The Candidates Tackle It?

Bernie Sanders has a plan for free public college. He would eliminate all tuition and fees at public colleges and universities. Of course that is only part of the cost of college. But taking away that expense would free up the money students receive from federal needs-based Pell Grants and other financial aid, helping to pay other expenses, such as room and board, transportation and books. Critics argue this plan is hugely expensive, would help rich families who don't need it and also would require the cooperation of state governments, which fund public higher education.

Hillary Clinton puts a lot of emphasis on bringing down the cost of college, so that students wouldn't have to go into debt to pay for it. She does want students to work ten hours a week and would have families that can afford it pay for tuition. But for those who can't the idea is that they wouldn't incur any debt for college, and then their Pell Grants could be used to pay for living expenses, much like the Sanders plan.

The big difference between Sanders and Clinton is he gets rid of tuition and fees and her plan is more needs-based. But again, critics say it would still be too expensive - and may be too convoluted.

Donald Trump's website doesn't address higher ed in its issues or positions sections. An adviser of his, Sam Clovis, was quoted in a piece in Inside Higher Ed saying Trump's campaign would fight and not endorse the Clinton and Sanders plans and would reject President Obama's push for free community college. But it's not entirely clear whether Clovis speaks for the campaign, and a spokesperson for the Trump campaign didn't respond to a request for assistance with this story.