Accessibility links
'Art Bastard': A Rebel With A Canvas Robert Cenedella established himself in the 1960s as the anti-Warhol. A new documentary goes through his years fighting against the New York art establishment by being, well, what the title says. 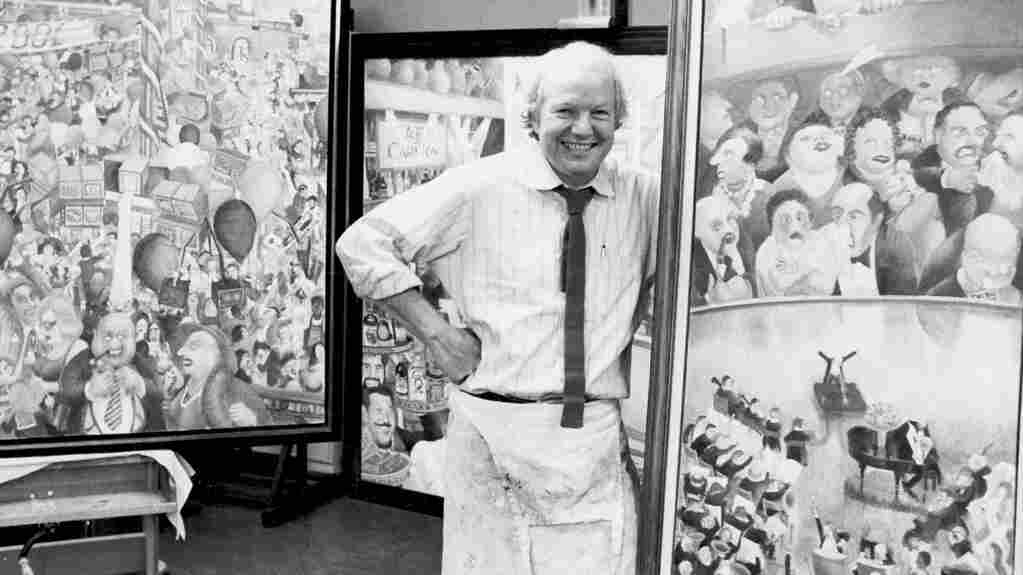 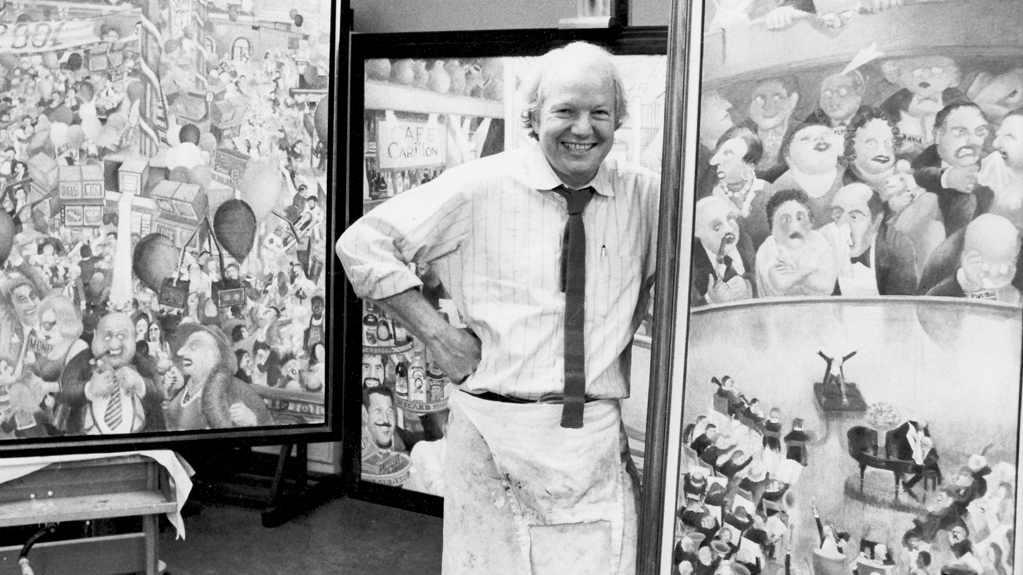 The artist Robert Cenedella, who is now 76 now, in his studio in the early in his career.

Robert Cenedella, the titular painter in the briskly entertaining new documentary Art Bastard, is a New York artist who has spent years battling the New York art establishment. To be clear, he is a bastard, in that he was born to parents who weren't married. But also in that he's an inveterate troublemaker — a mocker of other artists — who can be a thorn in the side of even people who are trying to help him.

A publisher, say, who once offered him an ad on an art magazine's back cover, only to have him submit an image of a faux Rothko with the word bulls*** scrawled across it. The publisher, who had thought he was doing Cenedella a kindness, suddenly found himself in a position of either censoring the ad or endorsing what amounted to an attack on another artist. He ended up publishing, but did so, he tells director Victor Kanefsky, with "annoyance."

Perhaps understandably, Cenedella has never been a fashionable artist. He says his heroes were 1920s and '30s activist painters like Ben Shahn and George Bellows, who painted bread lines and Depression scenes.

"They recorded history," he says admiringly. And they had "legitimacy" (a word that crops up a lot in this documentary) because their works were hanging in museums. But by the time Cenedella was hitting his stride, abstraction had taken over the art world — the poured and dripped paintings of Jackson Pollock, for instance, in which expressing a point of view was impossible. Quite apart from which, says Cenedella, "where people might say, 'well, that's a bad Hopper, or a bad El Greco,' I've never seen anyone say 'that's a bad Pollock.' Either they're all bad, or they're all good."

That sort of dyspeptic view did not endear Cenedella to the art establishment. His own paintings, meanwhile, influenced by the fiercely political early work of his mentor and teacher George Grosz, were about the bustling New York he lived in: colorful, action-packed, vibrant, with caricatures of real people.

In the film, director Kanefsky makes his paintings kinetic from the opening shots. A subway painting called Fun City Express is filmed in jiggly close-ups that pan across painted straphangers so that it feels as if you're riding the A train with them.

Another painting started out as a satirical piece about boxing, but when Cenedella realized he had painted one of the boxers to look like the father he grew up with, he decided to make it more personal. He painted the other boxer to look like the man he later learned was his real father. 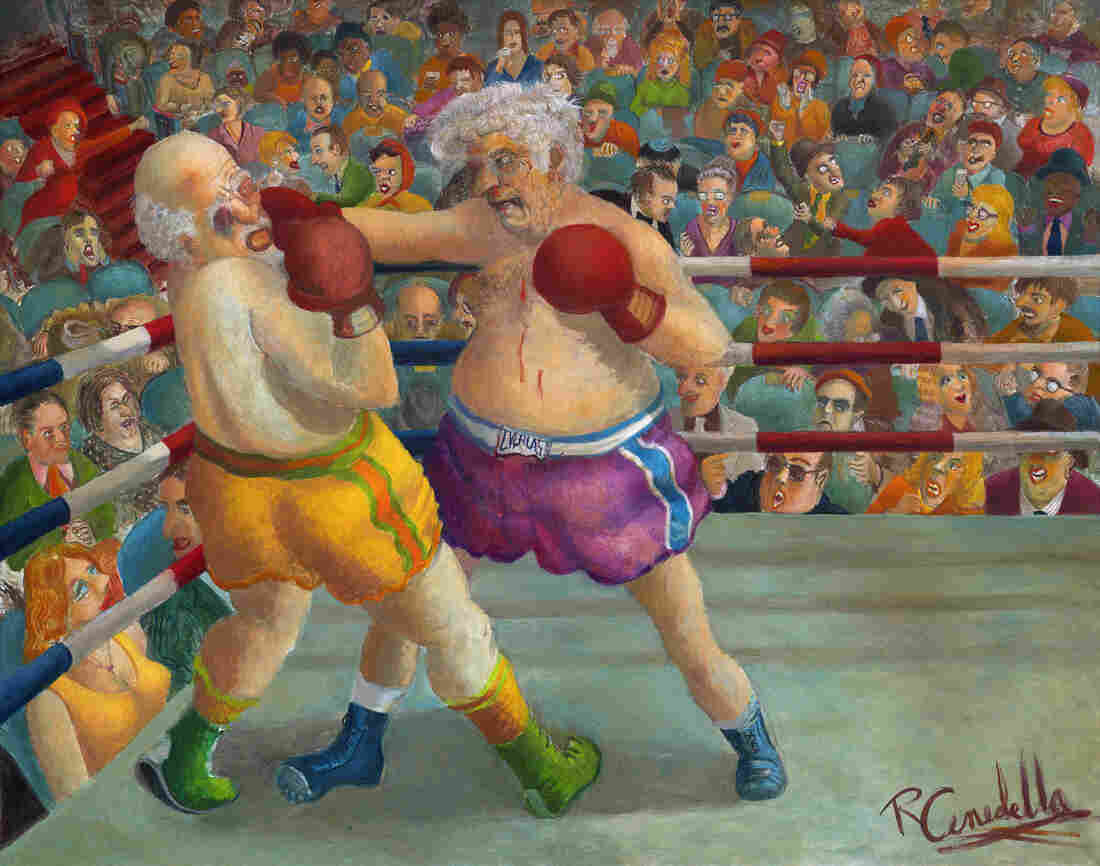 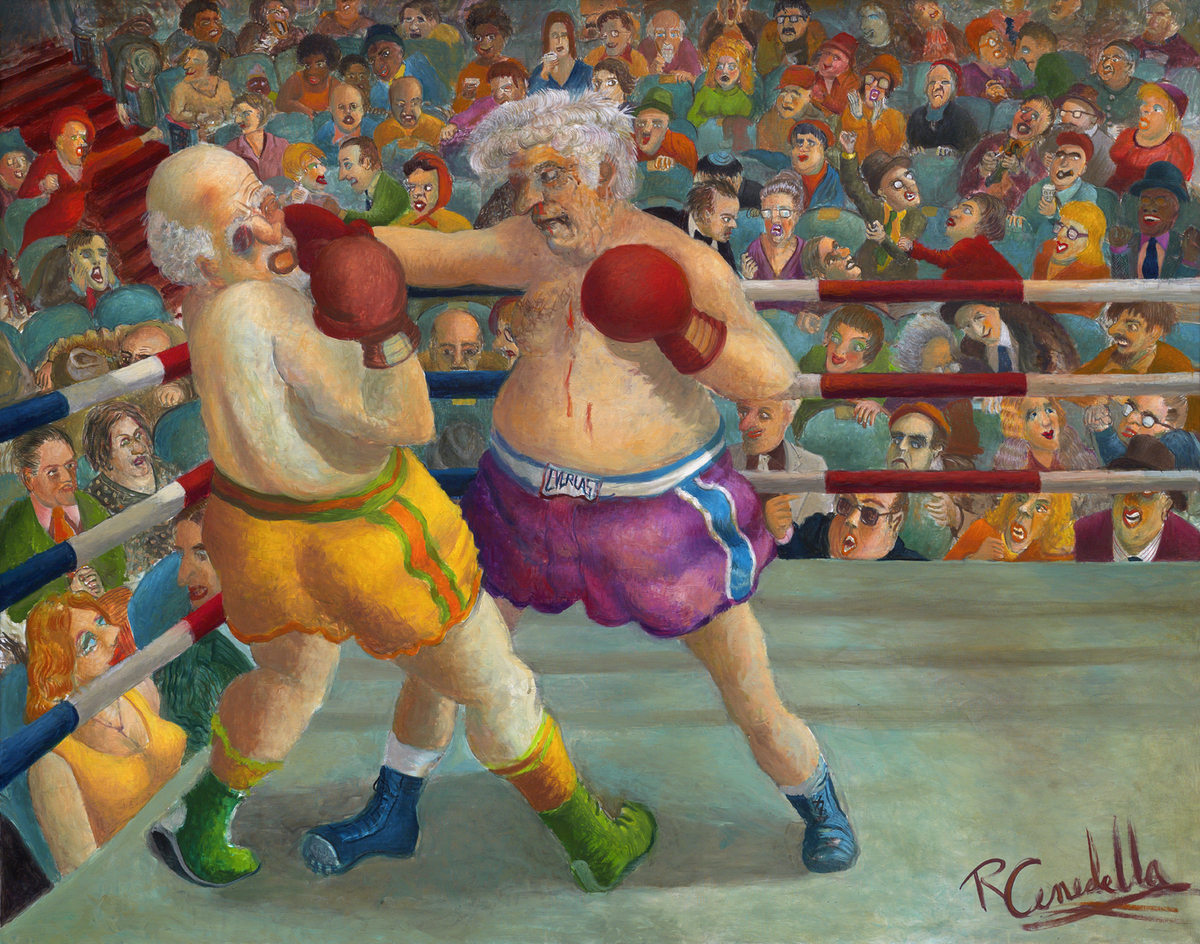 Robert Cenedella's Father's Day was therapy on the canvas.

"They're punching each other, and I was the one getting hurt. This was definitely a painting where I was doing therapy on the canvas. So what else are you gonna call it? Father's Day."

How's that for putting "legitimacy" at the forefront of your work?

Legitimacy in the art world, though, is something determined by galleries and museums, and the film chronicles why that sort of legitimacy has mostly eluded Cenedella. Some of this is self-inflicted. In the 1960s, the explosion of Pop Art — a movement he had no use for — led him to set himself up as the anti-Warhol. For a show he called Yes Art in 1965, instead of Campbell's soup cans, he painted Heinz soup, and in place of Warhol's lithographs of Green Stamps, he gave out actual Green Stamps to people who bought his paintings.

It was a joke that worked. The press went wild. It could have been his moment had he done more of it, but he said no, that to do more of it would just have made him "one of them."

And therein lies the rub: Art Bastard is a film about a man who has tilted — and continues to tilt — at the art-world equivalent of Don Quixote's windmills. He is hardly alone in that. Lots of talented artists will never be shown in museums. And lots of talented artists would doubtless agree with his assessment that the cultural establishment has rigged the game.

"It's not what they show that bothers me," he says quietly while visiting a museum in the film, "it's what they don't show."

And they still don't show Cenedella. But at least for the moment, movie theaters will. And the film company has arranged that some of those theaters will have his work hanging in their lobbies. Not quite the legitimacy he was looking for, but a victory of sorts for a proudly unrepentant Art Bastard.