Accessibility links
Donald Trump Hates SuperPACs, But He Needs Their Money Against Hillary Clinton Multiple superPACs are vying for the Trump campaign's stamp of approval even as they woo wealthy donors. 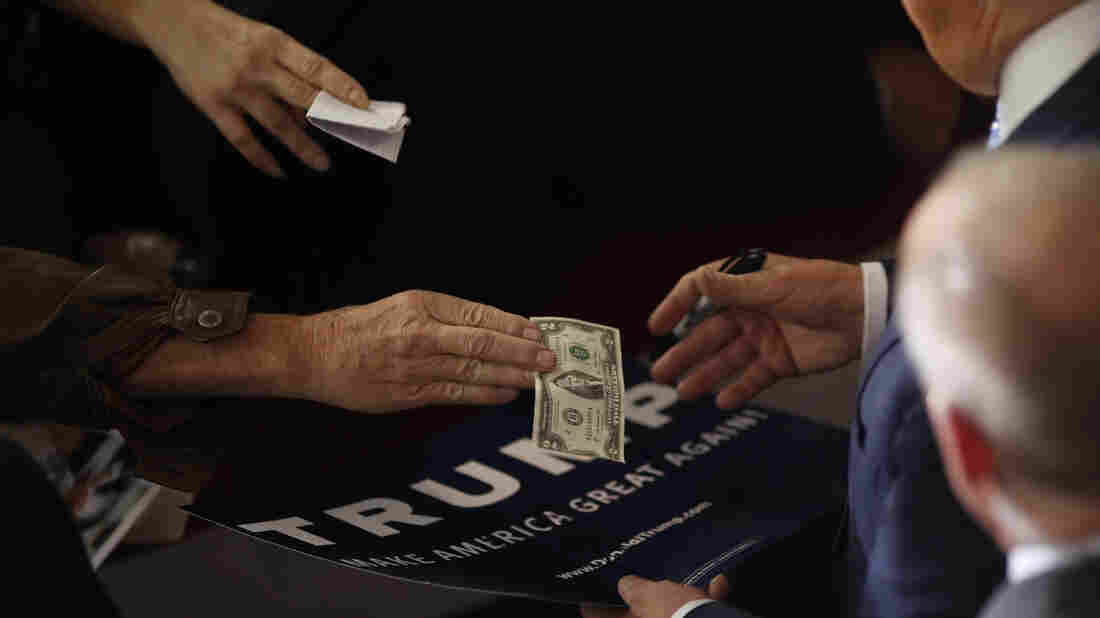 An attendee hands a U.S. $2 bill to Donald Trump during a town hall event in Gaffney, S.C., on Feb. 18. Luke Sharrett/Bloomberg via Getty Images hide caption 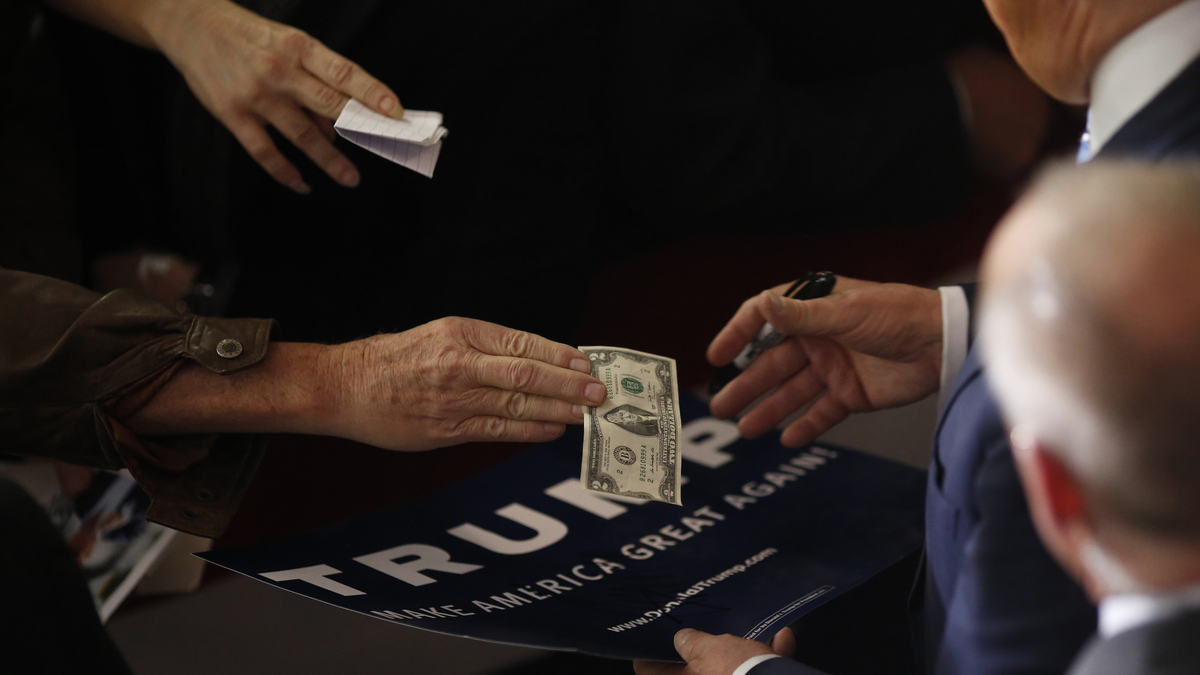 Donald Trump's contempt for superPACs is well documented. All through the primary campaign, he said the political groups, which take unregulated contributions, give million-dollar donors the leverage to control politicians.

"We have to do something about superPACs. Because superPACs are now running the country," Trump told students last January at Liberty University in Lynchburg, Va. "Gotta get rid of superPACs. Really, really, really bad."

Last year, Trump had his lawyer disavow pro-Trump superPACs. And as of the most recent disclosure filings, Trump has paid roughly 75 percent of his campaign's $59 million budget.

Now, at least four superPACs are competing to be Donald Trump's favored vehicle for a large portion of the estimated $1 billion that the general election campaign could cost. That's left major Republican donors confused at a time when Democrat Hillary Clinton's campaign has set up a sophisticated fundraising machine.

How Donald Trump Could Benefit In November From A Bad Economy

The friendship may give Barrack an edge in the battle for approval. On CNN Money last month, he said of Trump, "As big a personality as he is, his heart really sits in the shoes of the average guy."

At a second superPAC, Great America PAC, co-chair Eric Beach said, "We know who the Trump donors/supporters are, and our net is very wide, it's cast very wide."

Great America PAC was created last year as Trumpac, but changed its name to comply with a rule preventing outside groups from using candidates' names.

The superPAC says it has begun to enlist millionaire donors. It launches a series of fundraising events next week. And as evidence of its political talent, Beach name-checked their lead strategist, veteran Republican consultant Ed Rollins:

"I don't think that there's confusion in the marketplace," he told NPR. "I think people are aware of who we are. I think we have one of the top strategists in the country, in Ed Rollins. And we have a nice head start."

Doug Watts, a former Ben Carson adviser, is director of yet-another superPAC, the Committee for American Sovereignty. Watts emphasized that his group will be donor-friendly. "They'll be able to see what the advertisements are," he said in an interview. "They'll be able to have feedback. They'll feel good about our Hispanic outreach program."

Watts said Trump needs to let donors know his preferred superPAC. "Well, right now he hasn't indicated he likes any of them," he said. "And so, you know that's a little bit of a handicap."

A fourth superPAC is in its early stages, under the guiding hand of casino magnate Sheldon Adelson, one of the Republican Party's most generous givers.

By law, superPACs are independent of the candidates they support. Legal firewalls limit coordination. At the same time, donors don't want to waste their contributions. They expect a signal of where to send money for the greatest impact, and the most influence.

So Trump needs to perform a little ritual of modern politics: the blessing of the superPAC.

"Normally the way it works, the candidate will go to a potential large donor, and ask for the amount of money they are legally allowed to give to the formal campaign," said Vin Weber, a lobbyist, Republican adviser and former congressman.

That amount is $5,400; for a big donor, more a gesture than a meaningful contribution. For the candidate, Weber said it's a set-up for the real ask: "Please direct any additional money you want to give toward this superPAC."

That's all it usually takes to start spreading the word to major donors. But for Trump – who even writes his own tweets – having an allied but independent superPAC might be tricky.

"He is very hands-on, runs his own campaign, makes his own decisions," Weber said. "He's going to end up seeing things done on his behalf, by people that are totally out of his control."

For now, some million-dollar donors are waiting for a sign from Trump Tower.