Accessibility links
Was California The Last Weekend At Bernie's House Of Hope? Democratic presidential candidate Bernie Sanders has said he will contest every last vote. But does anyone think he will command as much attention after Tuesday's primary as he did this past weekend?

Was California The Last Weekend At Bernie's House Of Hope?

Was California The Last Weekend At Bernie's House Of Hope? 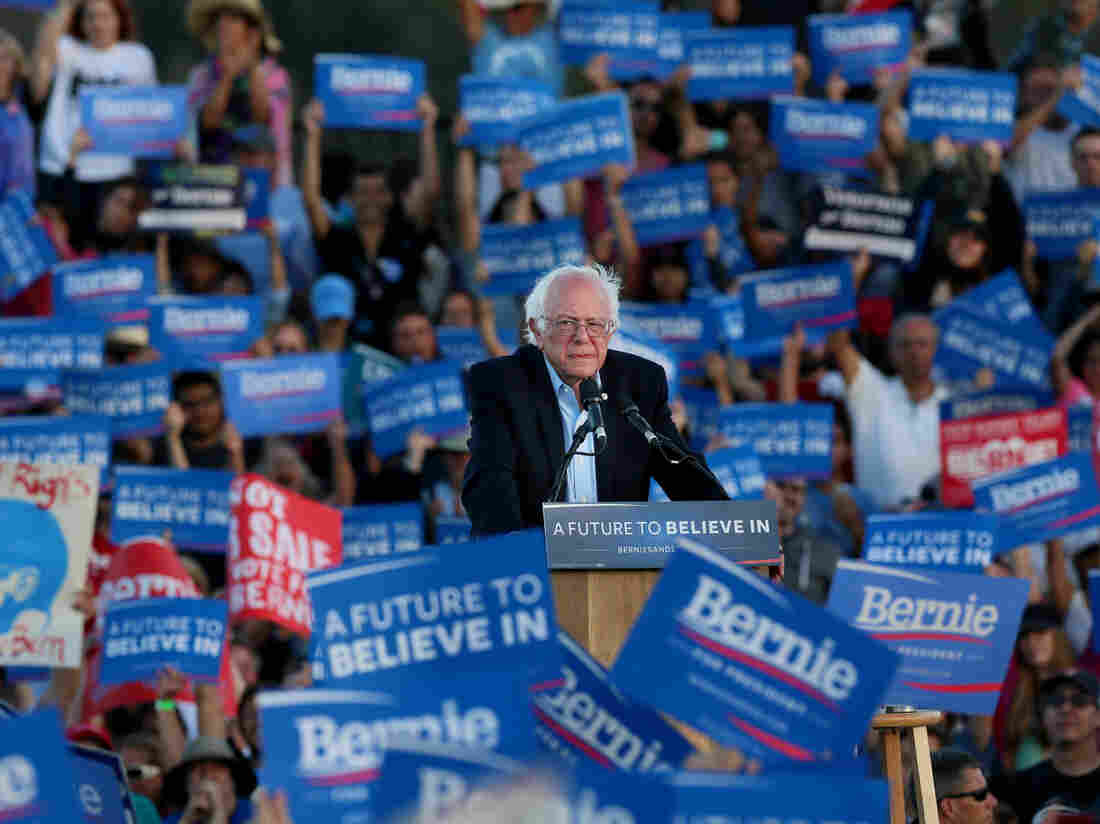 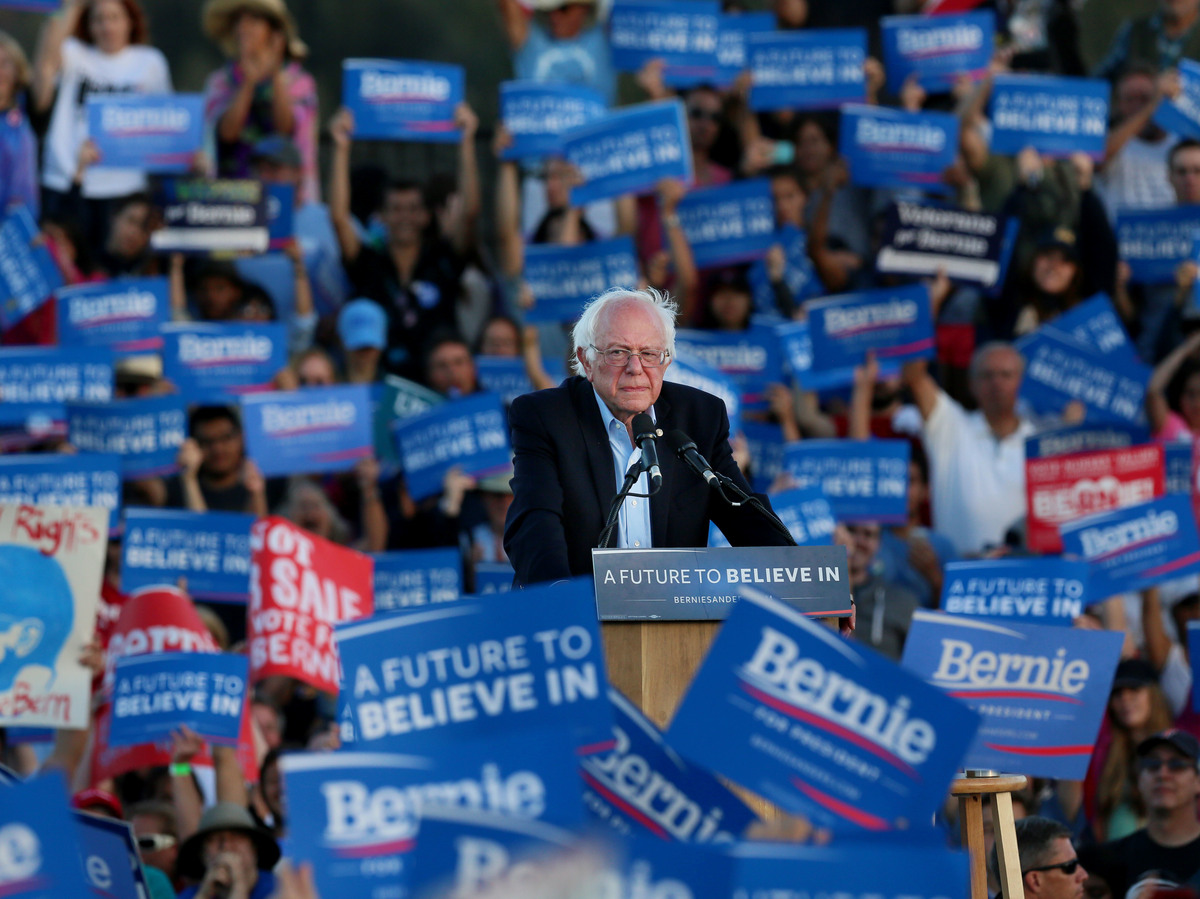 The legendary Route 66 wound its way from middle America to Southern California, a ribbon of aspiration ending on a pier reaching out into the Pacific from the coastal town of Santa Monica.

That pier still exists, a symbol of America's hopeful journey west and a touchstone for politicians such as Bernie Sanders, who brought his grandchildren there on Sunday.

Whatever happens Tuesday in California and the other states still voting, Sanders had a marvelous time on the last weekend when he could sell his dream of being the Democratic nominee for president.

That may sound harsh to the legions of Bernie Believers for whom the dream may never die. This weekend, they listened with faith to a candidate who could still speak of prospects, possibilities and promise. There was still a way to win.

But over the same weekend, Hillary Clinton almost reached her magic number of 2,383 delegates with the vote tallies in Puerto Rico and the Virgin Islands. Barring an utter collapse by her forces across the board on Tuesday, she will garner, on that night, the delegates needed for a first-ballot nomination in Philadelphia in July.

Sanders probably knows this as clearly as Clinton herself. He should be able to assess his predicament as easily as any observer who is paid to see the numbers with clear eyes.

But it also remains absolutely essential for any underdog in Sanders' position to maintain, to the very end, that the goal is within sight, victory can still be won. Without that hope, supporters will not be energized and engaged. And without energized and engaged supporters on this last Big Tuesday, everything Sanders has achieved in a year of campaigning might be in jeopardy.

A disappointing final day of multi-state voting would undercut the Sanders narrative, which is all about a populist hero vanquishing the will of the party hierarchy and slaying the dragon of the establishment.

That is why Sanders goes on feeding red meat to his stadium crowds, threatening to contest the convention and leveling accusations about coronations and rule-rigging and party corruption. He does this now because his chances of making a difference in Philadelphia depend on a strong finish in this last round of soundings of the voters' feelings.

But here is what will happen on Tuesday. By the time the New Jersey results are in, sometime after 8 p.m. in the Eastern time zone, the numbers will add up and Clinton will be the presumptive nominee. Not the official nominee, as that will depend on the convention. But she will have a clear majority of the delegates, both pledged and unpledged, reflecting the will of a clear majority of the votes cast by primary and caucus participants.

Sanders has said he will contest every last vote, including in the District of Columbia on June 14. But does anyone think he will command as much attention next weekend as he still did this past weekend?

Winning California, as Sanders may still do, will not net him enough delegates to alter the math, because the delegates will be split in proportion to the vote. That is the highly democratic model by which Democrats allocate delegates to reflect the primary voting. It means that even a fabulous Sanders breakout in the state would not prevent Clinton from winning the delegates she needs.

Only the prospect of a shocking report from the FBI probe into Clinton's use of a private email server would now seem to stand between her and a first-ballot victory at the Democratic convention.

If Sanders had some other issue in mind this weekend when he told interviewers that "the world may look very different by the end of July," he did not say what it was. That is also the issue raised by the Republican Party, when it argues that Sanders is right to contest the convention. On Sunday, GOP spokesman Sean Spicer referred to the FBI probe in saying that no one should call Clinton the "presumptive nominee."

It might have been embarrassing for the Sanders campaign to find itself arguing in tandem with the Republicans, but such are the bedfellows of politics.

This is the moment to stop and salute what Sanders has achieved. He started as a party outsider with little national name recognition. To some extent, that anonymity helped him create his campaign in a year of national resentment against the elite and the power structure. His outsider status helped make him the focal point of a youth movement within the Democratic Party.

At his best, Sanders has wed the rebellious 1960s with the exuberance of a new generation that questions the establishment. That is a feat no one could have expected him to achieve in the polls or in the primaries and caucuses. Today, he leads in hypothetical matchups against Donald Trump by more percentage points than Clinton does. This has become his main argument for displacing Clinton as the nominee.

Who would have thought the Democratic nomination in 2016 would devolve to an argument over who might best beat Donald Trump?

Joining the Democratic Party officially for the first time, Sanders has made quite a run for that venerable institution's highest honor. But if the goal was to win by the rules, or even to win by something resembling what the rules should be, then Sanders has fallen short. He mobilized a new army, but Clinton's older version of the party prevailed.

On this last weekend in California, both candidates campaigned with vigor and an upbeat message. Sanders went to a community center in the heart of Spanish-speaking Los Angeles, and he posed for selfies with beachgoers on the Santa Monica pier. Everywhere he kept alive the notion of a contested nomination.

Clinton's many appearances included one at West Los Angeles College, a two-year community college not far from the LA airport.

At this event, she was introduced by no fewer than 17 preliminary speakers, all of them women. They included several members of Congress and an array of Hollywood actors such as Sally Fields, Elizabeth Banks and Mary Steenburgen. The crowd lasted throughout the preliminaries to cheer lustily for Clinton herself. One of those cheering and waiting for a handshake was Sarah Griebe, an events planner who lives in Los Angeles.

"I understand where Sanders supporters come from," said Griebe, who supported Clinton in 2008. "It's hard when you invest so much time and energy in a candidate and they don't win. But Sanders and Clinton are pretty much on the same side. It's most important for us to continue movement forward and for the progress we've made in the last eight years to continue."

It may be easy for the Clinton people to speak of unity at this stage of the campaign, because they see the end in sight with the nomination going to their candidate. It will be much more difficult for Sanders' troops to forget their current opposition to Clinton.

But for this one last weekend, the Sanders backers could imagine the roles reversed. And they could imagine shocking the world, eclipsing Clinton and marching on to defeat Donald Trump.

This article originally referred to the legendary Route 66 as extending from New Jersey to Santa Monica, Calif. The route was from Chicago to Santa Monica. Also, Mary Steenburgen's name was misspelled in an earlier version of this post.