Accessibility links
Review: Kitty Cash, 'Love The Free Vol. 3' The Brooklyn DJ's final installment of her curated mixtape series is a patient journey toward personal excellence, crafted with a steady hand and a discerning ear fixed to the streets. 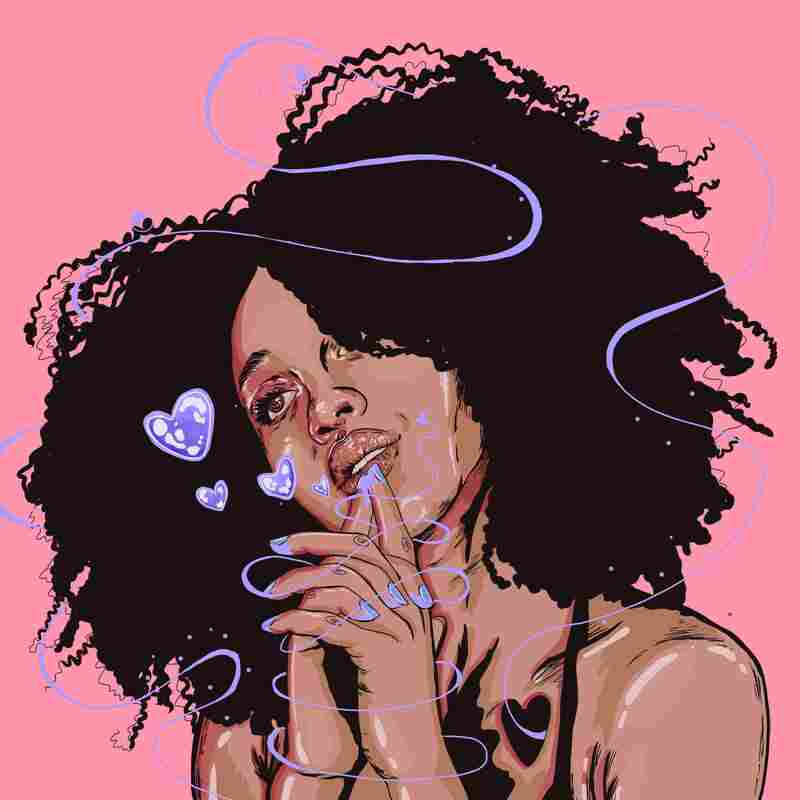 Brooklyn singer-songwriter Kevin Hussein's "King's Lullaby" is nestled near the end of Kitty Cash's new mixtape, Love The Free Vol. III. A quick peek at Hussein's Twitter account reveals a short, but peculiar, bio — "algorithm & blues." That self-descriptor speaks to not only Hussein himself (who's explored the perimeters and Venn diagrams of past and present with M.I.A., Rihanna and Theophilus London), but also to the overarching concept of otherness on Cash's latest and final installment of her original, curated mixtape series, Love The Free. She's well aware of the venerable tradition of DJ-hosted mixtapes, from the late DJ Screw — who's been so influential he feels immortal and built up his own coterie by hand-selecting the artists he felt best aligned with the slowed-down sound he pioneered in Houston in the '90s — to the omnipresent dominance of DJ Drama and Don Cannon in the '00s. As a contemporary puzzle constructor who knows exactly what she wants, Cash's role here is best understood in the context of her predecessors, but her focus and collaborative skills are unparalleled.

Born Cachee Livingston, Cash has made it her mission to thoughtfully create a safe space for these artists, where they're encouraged to play around with new flows, sounds and directions. MADEINTYO — SoundCloud's hip-hop boy wonder and Mr. Skr Skr himself — exclaims somewhat in awe at the very end of his track on Vol. III: "That s*** was amazing!" Produced by Odd Future's Left Brain, the dense, sample-heavy atmosphere of "LAMN" is miles away from what the rapper is accustomed to rhyming over; out in the real world, he sticks pretty closely to his tried and true producer, K Swisha. There was (and is) nothing wrong with his formula — but this venture to another place was necessary for his growth, and Cash helped make it happen.

Artists also have the opportunity to work through themselves on Love The Free Vol. III. The tape is brimming with kids who are new to the music game, and thus still endearingly rough around the edges (shouts to 18-year-old Marco McKinnis, keep grinding). There are also polished acts who've been on the scene for a minute in one way or another, and might still be trying to find their own way (one time for Jillian Hervey of Lion Babe, daughter of the Vanessa Williams).

And then there are moments of reintroduction, like with Xavier Omär, formerly known as SPZRKT (who we've shown love to before). Omär "broke up" with Christian hip-hop last year after brief flashes of success alongside Sango, and has been primed to move into a less restricted section of the industry since then. You can almost hear him evolve in real time on the second half of "Scarlett Vibe," produced in its entirety by New York-via-London musician Hiko Momoji.

On the flip side, there are instances here of beautiful confidence. Many of the artists featured are self-assured and don't need to experiment much, but they do embrace a new place to revel in their own abilities and take it to the next level (looking at you in particular, BOSCO and Lil Yachty). Cash is bubbly, yet poised, through every evolution, but when the Internet's favorite human, DJ Khaled, and the most carefree black girl of them all, Solange, have special guest appearances, they're gently nudging the DJ (who's standing in for all of us) forward in her abilities: they relay messages of hope in the forms of both love and self-preservation.

Love The Free Vol. III is a patient journey toward personal excellence. As she's been since Vol. I, Kitty Cash is at the front of her pack, leading the way with a steady hand and a discerning ear fixed to the streets. It will be interesting to see where the artists of this installment end up a year or so from now — but it's even more exciting to think about what Cash herself will do next.