Accessibility links
Muhammad Ali: A Poet In And Out Of The Ring "The Louisville Lip" was famously as fast with his words as with his fists — years before the birth of hip hop, he was a battle rapper flipping similes and metaphors in a language all his own.

Muhammad Ali: A Poet In And Out Of The Ring

Muhammad Ali: A Poet In And Out Of The Ring 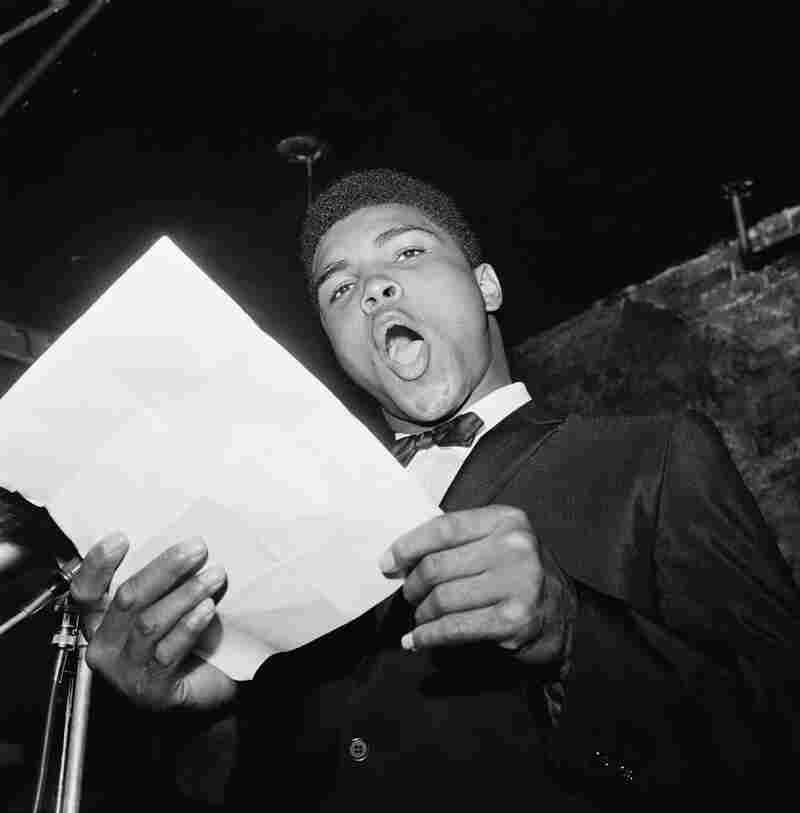 Muhammad Ali reads one of his poems during a contest at the Bitter End, a Greenwich Village coffeehouse and nightclub, in 1963. Bettmann/Bettmann Archive hide caption 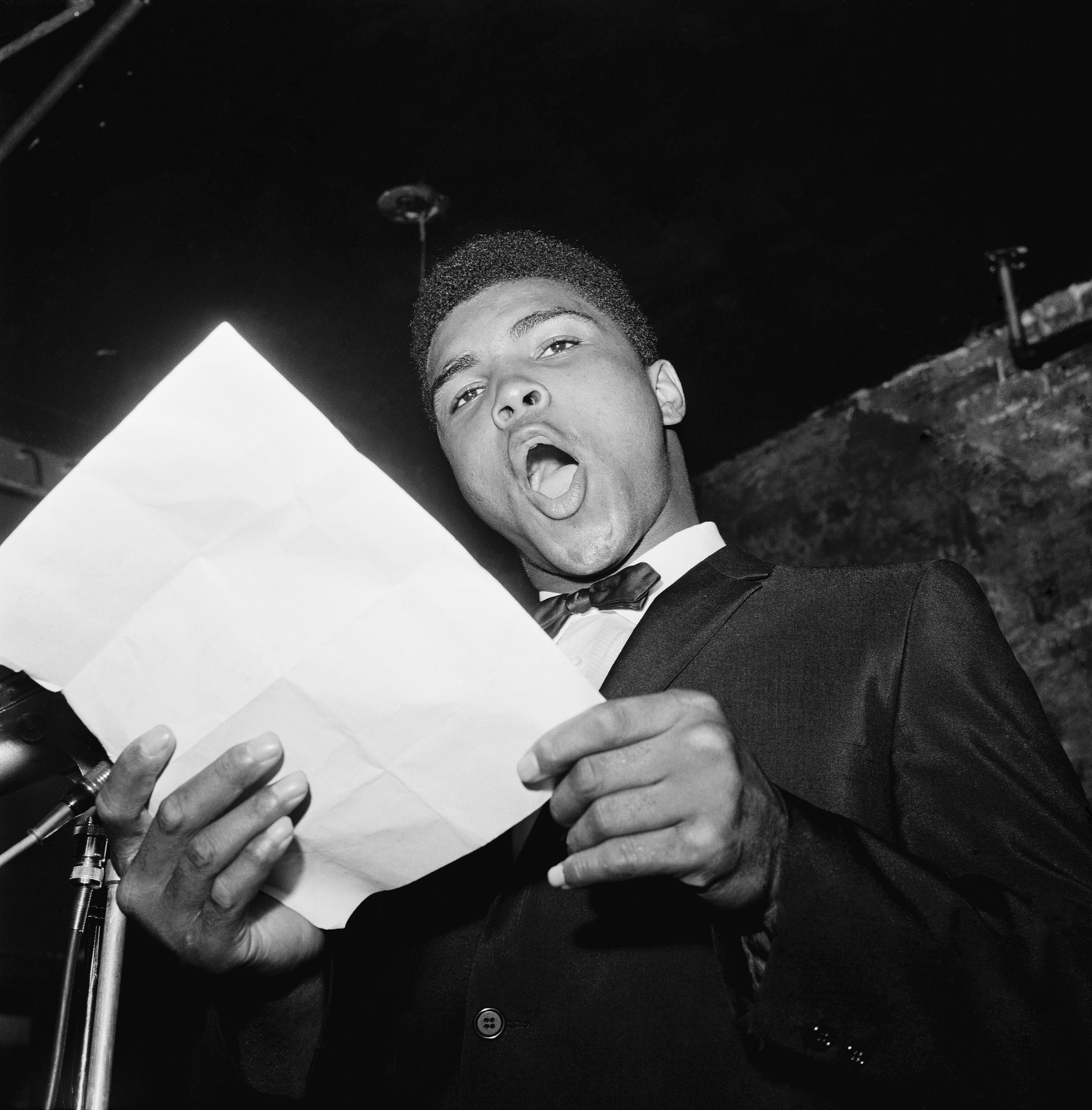 Muhammad Ali reads one of his poems during a contest at the Bitter End, a Greenwich Village coffeehouse and nightclub, in 1963.

I don't believe it's odd or unreasonable, at a time like this, to wonder if our culture still breeds heroes.

Sure, there are people out there now defying expectations, performing heroic feats, fighting just wars, and redefining our perceptions of human capacity and invention.

But Muhammad Ali is gone, and he was certainly the last of his kind.

At bars and barbershops, when the subject of boxing comes up, one question always dominates the discussion: Who was the greatest? Who is really the GOAT, the superior one whose younger, prettier self will forever preside over all those he destroyed, sweat falling from his brow? I've heard arguments for Rocky Marciano with his perfect record of 49 - 0; George Foreman and the force he was at his peak; Iron Mike Tyson, holy hell, with his freakish speed and ferocious punching power; and, of course, Muhammad Ali.

What cannot be argued, though, is that Muhammad Ali was the greatest poet and performance artist to ever grace the professional ring. He was a truth teller in every sense, an anti-war pot-stirrer with a wry wit who would effortlessly kick into verse mid-conversation. He wasn't a politician like some have tried to make him out to be. But his presence, his voice and his poet-like conviction carried political weight beyond that of any athlete of his era, and perhaps ever.

Ali had a love of language, and a skill for linguistic theatrics that, while plainspoken, packed heft. He was Whitman donning white trunks and a robe. Not bad for a man who may have suffered from dyslexia, who barely graduated from high school.

'A World Without Muhammad Ali': Reactions To A Champion's Death

Still, he was always drawn to words. And part of Ali's genius was mastering the art of making his words serve his purposes, both in and out of the ring — his playful approach to rhyme often made doubters eat his words, and theirs: "Henry, this is no jive. The fight will end in five."

Ali predicted his victories with an assurance that, while harsh and offputting to some, told you he was no simpleton with an empty ego. And while I never had the opportunity to watch him float and sting in real time — his final bout took place mere months after I was born in 1981 — much of my childhood was spent admiring his skill and imposing persona. I knew he was different, I felt his words.

He flipped similes and metaphors like a battle rapper holding court in a cipher that was his and his alone. Even his jabs were like couplets that told you more about yourself than you could have ever hoped to know.

Ali was a physical poet, and when he said he "done handcuffed lightning" his adversaries had no choice but to believe. He flipped similes and metaphors like a battle rapper holding court in a cipher that was his and his alone. Even his jabs were like couplets that told you more about yourself than you could have ever hoped to know. But there always seemed to be deeper meaning behind his expression, and his terse, lyrical trash-talk represented something bigger than even he could have predicted.

Born in 1942, Ali came of age during the tension of the 1960s, a time when poetry and protest were almost inseparable in popular culture. Artists and poets were on the front lines of every conflict, carrying the torch for justice and giving it a voice. And Muhammad Ali was, however loosely, among this group of misfits and disruptors who never grew weary of speaking up.

In July of 1972, while in Dublin preparing to fight Alvin 'Blue' Lewis, Ali was interviewed on television by Cathal O'Shannon. During the final segment of the broadcast, O'Shannon turns attention to Ali's poetry, which ranged from light and braggadocious to deeply serious, and Ali recites an original poem about the previous year's Attica prison uprising, where over 1,000 inmates seized control of the prison and demanded improved living conditions. In it, he takes on the role of a black prisoner addressing a white warden:

Better far from all I see

To die fighting to be free

What more fitting end could be?

Here is something that is true: There will always be extraordinary athletes and poets challenging our view of the world and astounding the masses with their prowess. But there will never, not ever, be another Muhammad Ali. What more fitting end could be?