Accessibility links
'Infomocracy' Is A Sci-Fi Thriller With Election-Year Chills Malka Older's new book takes place at the end of the 21st century, in a future where the game of politics has become more streamlined — but infinitely more complex and terrifying.

'Infomocracy' Is A Sci-Fi Thriller With Election-Year Chills

'Infomocracy' Is A Sci-Fi Thriller With Election-Year Chills 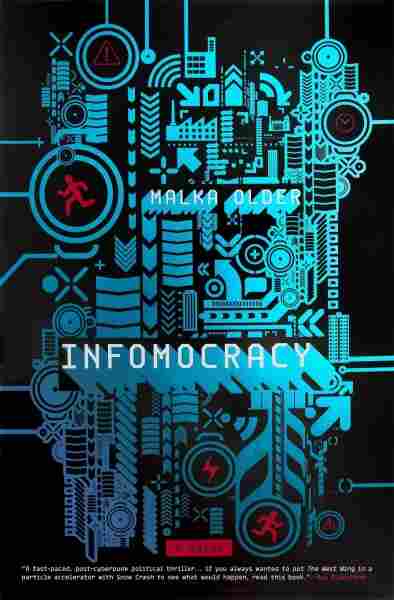 Science fiction is known for speculating on technology, but it's always been just as passionate about politics. From Philip K. Dick's imagining of a fascist America post-World War II in The Man in the High Castle to recent books like Ada Palmer's elaborate Too Like the Lightning, the philosophy and practice of political theory have made for gripping sci-fi. The same goes for Infomocracy. The debut novel by Malka Older, it projects a future where the game of politics has become streamlined yet infinitely more complex — with the added variable of advanced tech making the system that much more volatile. As election-year reads go, it's both enlightening and horrifying.

The book takes place in the latter half of the 21st century, 20 years into a "new international order." War is obsolete and prosperity is on the rise, thanks to the abolition of nations as we know them. Groups of 100,000 voters — known as centenals — elect an international, corporate-tied party that controls the globe. Ken is a political operative for one of the major parties, and he's a busy man. The election of the century is underway, a crucible of political intrigue that also brings out two other operatives with their own agendas: Domaine, a mysterious dissident who works "for a different cause" than this new system of "microdemocracy," and Mishima, an agent for Information, a powerful search engine that has wormed its way into every niche of life.

Their paths — and pasts — crisscross as their missions take them around the globe, from Addis Ababa to Paris to Jakarta. Meanwhile the stakes of the new election get increasingly higher as a new government is poised to take the coveted Supermajority. Then a cataclysm hits, throwing everything into even deeper turmoil, even as Ken, Domaine and Mishima uncover the strange machinery at the heart of this brave new democracy.

Kinetic and gripping, the plot hurtles toward an electoral climax that leaps off the page — assuming, of course, elections are your thing. It takes an avid interest in politics to keep up with Older, but it's worth it.

Like many high-concept science-fiction novels, Infomocracy can get dense. Older has a milelong list of credentials as an academic and an international aid worker, and she brings the full weight of her experience and expertise to the book. Lengthy debates about the nature and paradoxes of democracy — including a debate among candidates in the election — are rendered with though-provoking depth. Sometimes it's at the expense of the characters and dialogue, however, both of which occasionally come across stiff and distant. And some of the futuristic gadgets, including automatic interpreter rings and anti-wrinkle electrodes, feel like something out of a B-movie rather than a cutting-edge novel. It doesn't help that the pop-culture references sprinkled throughout the book, such as The Breakfast Club and Watchmen, date from the 1980s rather than something a bit more 21st century.

As a thriller, though, Infomocracy sparkles. Kinetic and gripping, the plot hurtles toward an electoral climax that leaps off the page — assuming, of course, elections are your thing. It takes an avid interest in politics to keep up with Older, but it's worth it. As her geopolitical shell game hits terminal velocity, the tenuous grasp we have on our own democracy becomes frighteningly clear. "Yes, it's all about participation," Domaine says with no small amount of sarcasm. "No matter who wins or loses, as long as everyone plays the game." Older makes vital points about the disconnect between participatory government and representative government, not to mention the increasing corporate influence on public policy. During an election year as nail-biting as 2016, it couldn't be more penetrating or relevant.