Accessibility links
Review: The Low Anthem, 'Eyeland' This is an album in which you can lose yourself and, along the way, glimpse something you've lost. Throughout Eyeland, The Low Anthem crafts a rich Technicolor psych-folk world. 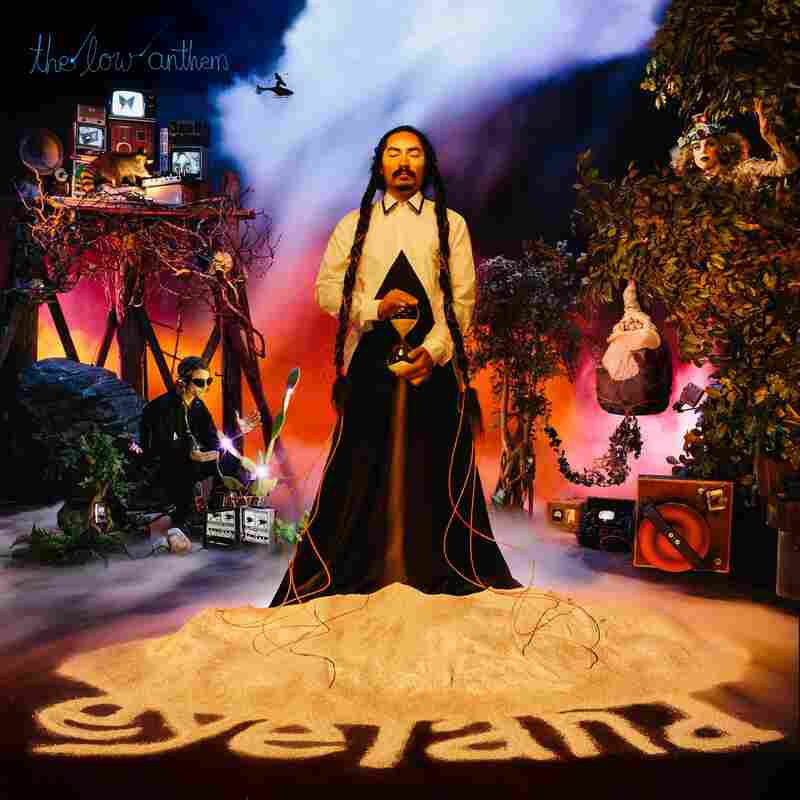 The Low Anthem, Eyeland Courtesy of the artist hide caption

The Columbus Theatre has sat in vaudevillian splendor atop Federal Hill in Providence, R.I., since 1926. It's a place invested with peculiar meaning. Off the intersection of America Street and Broadway by the Atlantic ocean blue, the Columbus supposedly has 1,492 seats. Once a movie theater, then a smut house, the theater has recently found new life through another national pastime, indie folk. Jeff Prystowsky of The Low Anthem reopened it as a concert venue and recording space in 2012, and has been working with his band on a strange project ever since: a record called Eyeland.

The space seems to have worked its magic on the band. The Low Anthem entered the national folk scene in 2008 with a song about Charles Darwin, and ever since, the group has done some evolving of its own. "Charlie Darwin" was an archetypal-sounding cut of 2000s pop-folk whose words suggested something deeper. Eight years and one more album later, the band has realized that depth in the Technicolor psych-folk world of Eyeland.

Eyeland is an elegant concept album whose title track is a kind of metaphor for consciousness — specifically, the enchanted and terrifying time in childhood when illusion and reality aren't yet cleaved. The Low Anthem conjures that world with music that plays with the senses even as it philosophizes about them. "Color's not real, no one denies / It's a beautiful trick / And you dream it to life / A beautiful trick of the eye," the band members sing in "In Eyeland." The album tells the story of a group of kids forced from childhood after one of their air-hockey tables catches fire and burns a house down. Growing up, in the album's world, is a kind of trauma that boards up a rich internal world; when you grow older, you trade childish things for a notion of real life that lacks meaning and magic. The movie palace becomes a porn theater.

The band has channeled the weird old veins of The Columbus in the record's rich soundscapes. "Wzgddrmtnwrdz," one of Eyeland's two instrumental tracks, features a chorus whistling The Beatles' "Yellow Submarine." That band is a clear influence on The Low Anthem's production; where 2011's Smart Flesh was so spacey that it sometimes threatened to drift away, the self-produced Eyeland feels vivid and expressive. It recalls freak-folk acts like Devendra Banhart, as well as the intimate craftsmanship of a band like Sparklehorse. The Low Anthem has hit on a sound commensurate with its rich narratives and poetic phrasing. "The Pepsi Moon" is a quiet folk tune about a marketing campaign that aims to (you guessed it) project the Pepsi logo onto the moon. The band gilds a central acoustic guitar and vocal track with distant horns, eerie high violins and swooping harmonics. The resultant track evokes both a disquieting sense of capitalism-gone-too-far and childish wonder at a red, white and blue moon.

The Low Anthem's studio has, at each stage of its history, been the kind of place to grip a young adult's mind — first, perhaps, on a grand family trip to the movies in the 1930s; then sneaking into its illicit showings as a teenager in the middle of the century; then quickening your step past it, boarded up and looming, in the late 2000s. Now, it's open to more people than ever through The Low Anthem's boldly conceptual work. This is an album in which you can lose yourself — and, along the way, glimpse something you've lost.