Accessibility links
'Escapology' Gets Weird Fast. And Did We Mention The Sharks? Ren Warom's tale of AIs, genius hackers, corporate crime and the occasional sea creature uses familiar building blocks to create a wild, loud, corkscrewing story that builds to a bloody conclusion.

'Escapology' Gets Weird Fast. And Did We Mention The Sharks?

'Escapology' Gets Weird Fast. And Did We Mention The Sharks? 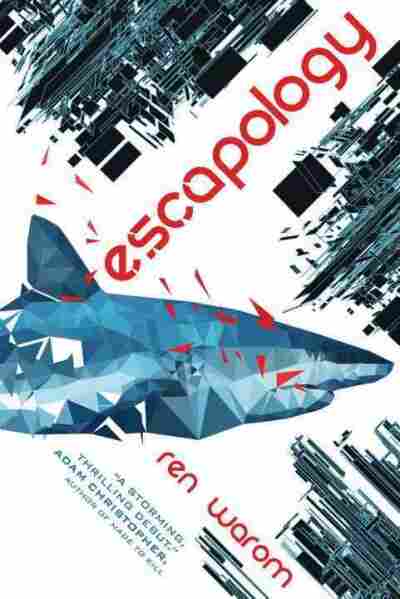 Ren Warom's Escapology is a loud book. It thumps and howls and whistles and squirms. It's a twitchy thing — won't sit still for a second. It makes no sense sometimes. It's derivative and odd, big and intimate at the same time, clunky and uneven and trope-heavy and manages to be both 2016 post-genre original and totally late '80s cyberpunk samizdat page to page, sometimes line to line.

At its simplest and most pure, it is the story of Shock Pao, a genius-level computer hacker who is a disaster IRL. A drug addict, corporate washout and unemployable mess, he is constantly on the run — from the competition, dissatisfied customers of his criminal data-thievery, old friends, himself. It is the story of Amiga, a high-tech assassin who wants out of the life. It is the story of Petrie, bosun of the land ship Resurrection, and the crime lord Twist Calhoun and Mim (a gangster) and then some confined AIs who want their freedom and, also, a digital octopus.

Things get weird fast is what I'm saying. They start all purebred Neuromancer in a way that seems so familiar and so shot-for-shot that it borders on fan fiction (the low-rent hacker, the girl assassin, the sheen of neon in rain-damp Japanese-y streets), then take a quick (and tonally lurching) detour in the direction of Neal Stephenson's Snow Crash before shrugging off all homage (save a lingering Ribofunk goopiness that never goes away) and carving their own bloody, corkscrewing path. It's a book that gave me the same sensation that playing with my Star Wars figures did when I was a kid, trying to remake moments from Empire in my bedroom. Sure, the characters are all the same, but the story just goes right off the rails as soon as Yoda shows up on Hoth.

And there's nothing wrong with that ... kinda. There's nothing wrong with that if you can get past the sense that Warom is assembling her world from the detritus of a hundred other near-future cyberpunk worlds come before, snapping them together like pieces from a giant, dirty Lego set and lacing them tight with a monorail that keeps them all connected. You might even get off on the expansiveness of it, because she's not just lifting riffs from the old masters, but weaving in strains of the New Weird and pop-modernism and a healthy dose of JRPG WTF?!?, too, when she salts the whole thing with names and slang and places that are not explained on first mention, or third, or fifth, and sometimes never explained at all. I read the whole thing and I never understood what exactly J-net was. Who Breaker had been. The familial structure of the big bads or why, in Warom's version of the Net (called the Slip), everyone is a fish.

It's a book that gave me the same sensation that playing with my Star Wars figures did when I was a kid, trying to remake moments from 'Empire' in my bedroom. Sure, the characters are all the same, but the story just goes right off the rails as soon as Yoda shows up on Hoth.

Yeah, fish. Seriously. And I mean, OK. It ties nicely to the fact that we're also dealing with another post-apocalyptic world here — flooded, ruined, with just a few hubs of land left on which the survivors of the cataclysm crouch — but it is still deeply weird and jarring. And then gets even weirder when, at midpoint, Shock Pao manages the heist that is the hinge point of the plot (stealing a thing I never really understood from artificial intelligences whose motivations were, to this point, completely inexplicable) and the inner world of the Slip manifests into the real. Meaning that the main character now travels everywhere in the real world with a shark following him and an octopus sitting in his lap.

Still, it's a choppy ride. There are ugly moments that must be slogged through to get to the meaty good stuff (of action, of dialog, of the occasional well-turned phrase or sudden, surprising depth of characterization), but Warom's vision holds together just enough to make the ride exciting and worthwhile. Just enough to bring you to the crashing, blood-soaked conclusion, which she handles more deftly and with more heart than most debut authors can manage. And to a simple, beautiful, three-paragraph ending that she sticks with remarkable grace.

It's really something you have to see to believe.