Accessibility links
Not Always A 'Thunderbolt': The Evolution Of LGBT Rights Under Obama Much has changed during the Obama administration — including the legalization of same-sex marriage. The president praised that Supreme Court decision, but activists have not always applauded him. 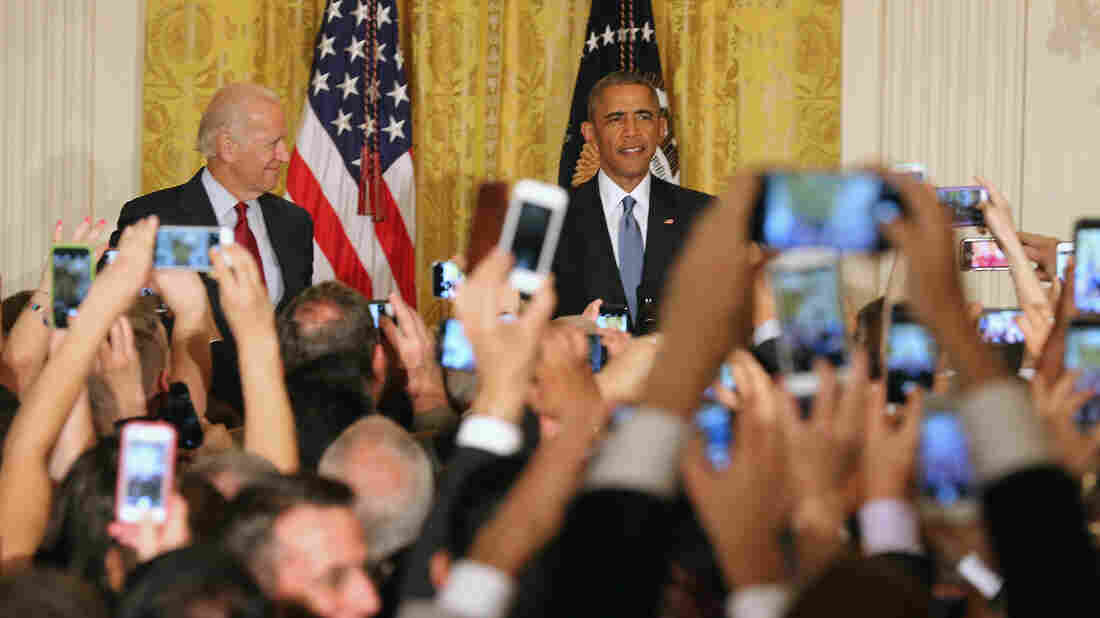 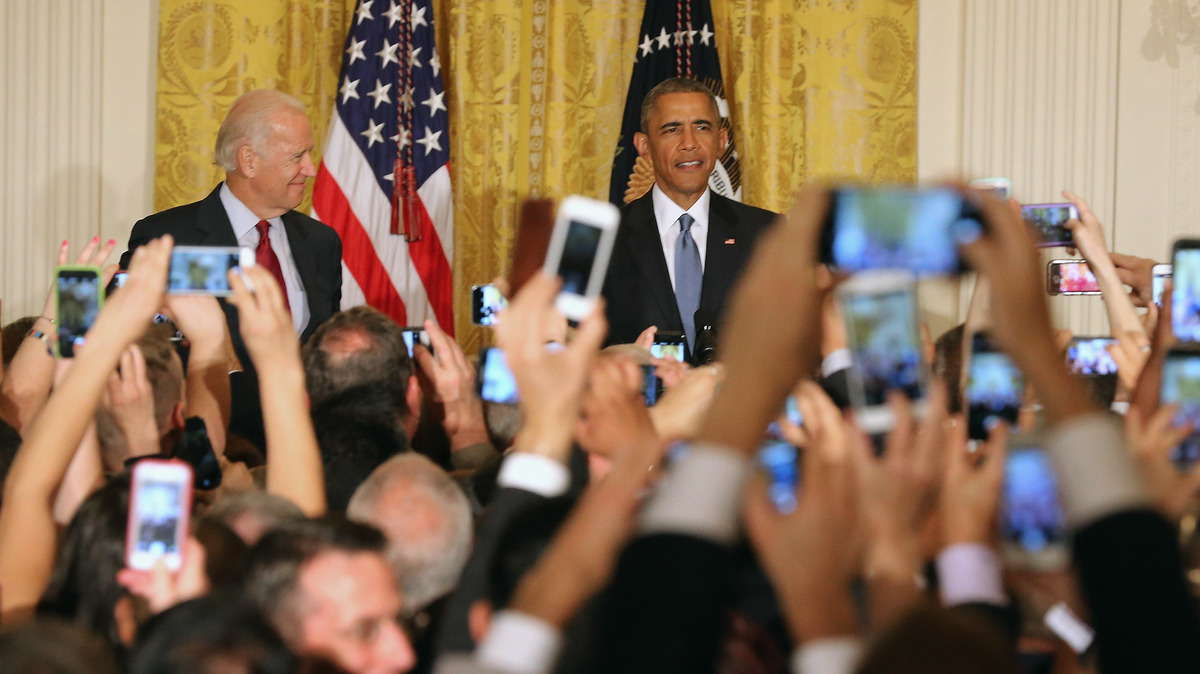 President Obama and Vice President Joe Biden attend a reception for LGBT Pride Month in the East Room of the White House on June 24, 2015, in Washington.

Gay and lesbian activists gather at the White House on Thursday for a celebration marking LGBT (Lesbian, Gay, Bisexual, and Transgender) Pride Month. It's become an annual event, tied to the monthlong commemoration of the Stonewall riots, which helped launch the modern gay liberation movement.

President Obama's years in office have seen a flowering of gay and lesbian rights, culminating a year ago when the Supreme Court legalized same-sex marriage in all 50 states.

"Progress on this journey often comes in small increments, sometimes two steps forward, one step back," Obama said during a Rose Garden celebration hours after the high court's decision was announced. "And then sometimes, there are days like this, when that slow, steady effort is rewarded with justice that arrives like a thunderbolt." 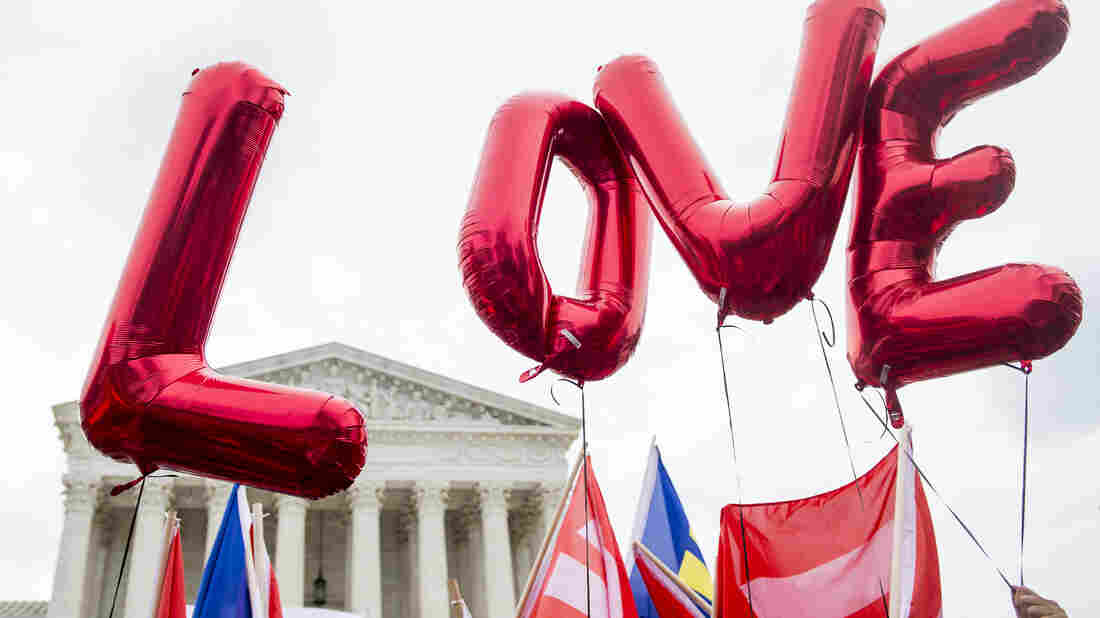 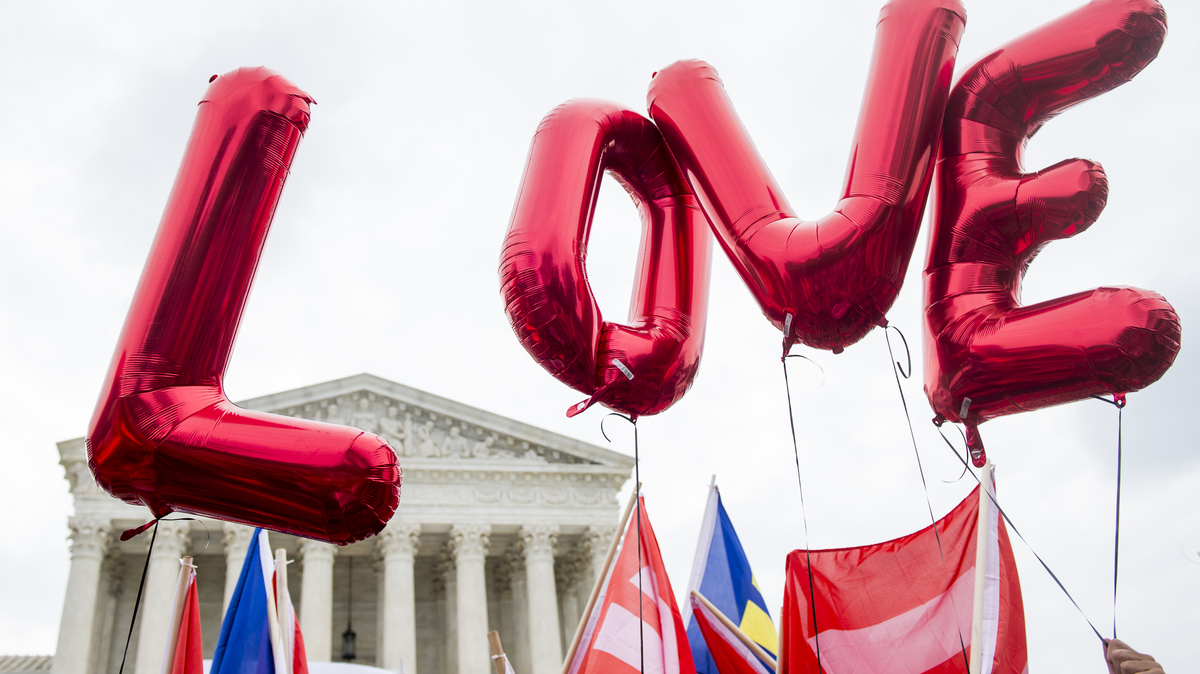 Same-sex marriage supporters from the Human Rights Campaign fly "LOVE" balloons Jun 26, 2015, in front of the U.S. Supreme Court as they await the court's decision in a same-sex marriage case. The justices' ruling legalized it nationwide.

At times, Obama has seemed less a trailblazer hurling thunderbolts than a weather vane, merely reflecting the shifting political winds. He'd campaigned as a "fierce advocate" for gay rights but disappointed some activists early on.

Richard Socarides, who'd been an adviser on gay rights to Bill Clinton, complained that Obama was "missing in action" in the push to end the military ban on openly gay service members.

"They didn't want to repeat the mistakes that President Clinton made by trying to move too quickly on gay rights," Socarides said. "They were so intent on not repeating those mistakes that I think they became too cautious."

Obama acknowledged that frustration during his first Pride reception seven years ago.

"I know that many in this room don't believe progress has come fast enough, and I understand that," Obama said. "It's not for me to tell you to be patient any more than it was for others to counsel African-Americans who were petitioning for equal rights a half-century ago."

The president's defenders say that what looked like foot-dragging in the push to reverse the "don't ask, don't tell" policy was actually careful groundwork. They argue that Obama needed to win support from both the military and the Senate before he could make a lasting change.

"The story that got told was that somehow the president had to be dragged along unwillingly," said Tobias Wolff, who advised Obama on LGBT issues during the presidential campaign and after. "Nothing could be further from the truth."

The administration also angered some gay rights advocates by initially defending a law that barred federal recognition of same-sex marriages, even in states where they were allowed. At the same time, the White House was working in countless smaller ways to expand gay rights in housing assistance, hospital visitation and other areas.

"They put LGBT people into 'We the People' on a scale that had never happened before," said attorney Mary Bonauto, who's with the group GLBTQ Legal Advocates and Defenders.

And then there was the president's own, very public "evolution" on same-sex marriage. When he first ran for president, Obama went only as far as supporting civil unions. But after Vice President Joe Biden took the plunge during the re-election campaign four years ago, Obama went on national television to announce that he'd changed his mind, too.

"I think same-sex couples should be able to get married," Obama told ABC's Robin Roberts.

To conservative critics, the turnaround was a bitter bait-and-switch.

"If Barack Obama had actually laid out in full the LGBT agenda he was going to pursue back in 2008, I think he would never have been elected president," said Peter Sprigg of the Family Research Council, which opposes same-sex marriage and other LGBT rights.

By 2012, public sentiment had already shifted in support of gay marriage, according to Pew Research Center (chart below). But even if the president was just mirroring public opinion polls, it was a major step politically.

"In one day, he turned the conventional political wisdom on its head," recalled adviser Wolff.

Far from a political liability, the president's embrace of same-sex marriage helped to mobilize young supporters. And he was handily re-elected. In his second inaugural, Obama wove the push for gay rights into a broader civil rights tapestry, stretching from Seneca Falls and Selma to Stonewall.

"Our journey is not complete until our gay brothers and sisters are treated like everyone else under the law," Obama said, drawing cheers from the crowd on the National Mall. "For if we are truly created equal, then surely the love we commit to one another must be equal as well."

In this final year, the administration has been even more aggressive, battling for transgender rights. The Justice Department sued North Carolina over its new law requiring public school students to use the bathroom that corresponds to their biological sex. And Attorney General Loretta Lynch delivered a passionate message directly to transgender people.

"We see you. We stand with you. And we will do everything we can to protect you going forward," Lynch said.

A vivid symbol of that inclusive spirit came on the night of the Supreme Court's marriage decision last June, when the White House itself was lit up in rainbow colors. For longtime adviser Wolff, it was an emotional moment. 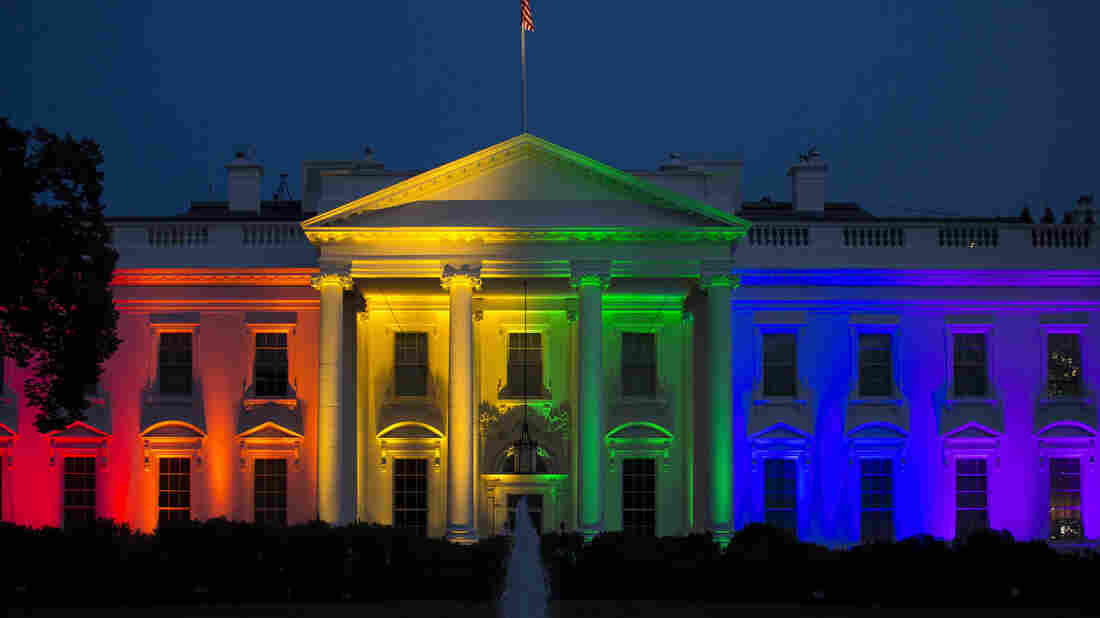 The White House was illuminated in rainbow-colored light on June 26, 2015, after the Supreme Court issued a ruling that made same-sex marriage legal nationwide. Drew Angerer/Bloomberg via Getty Images hide caption 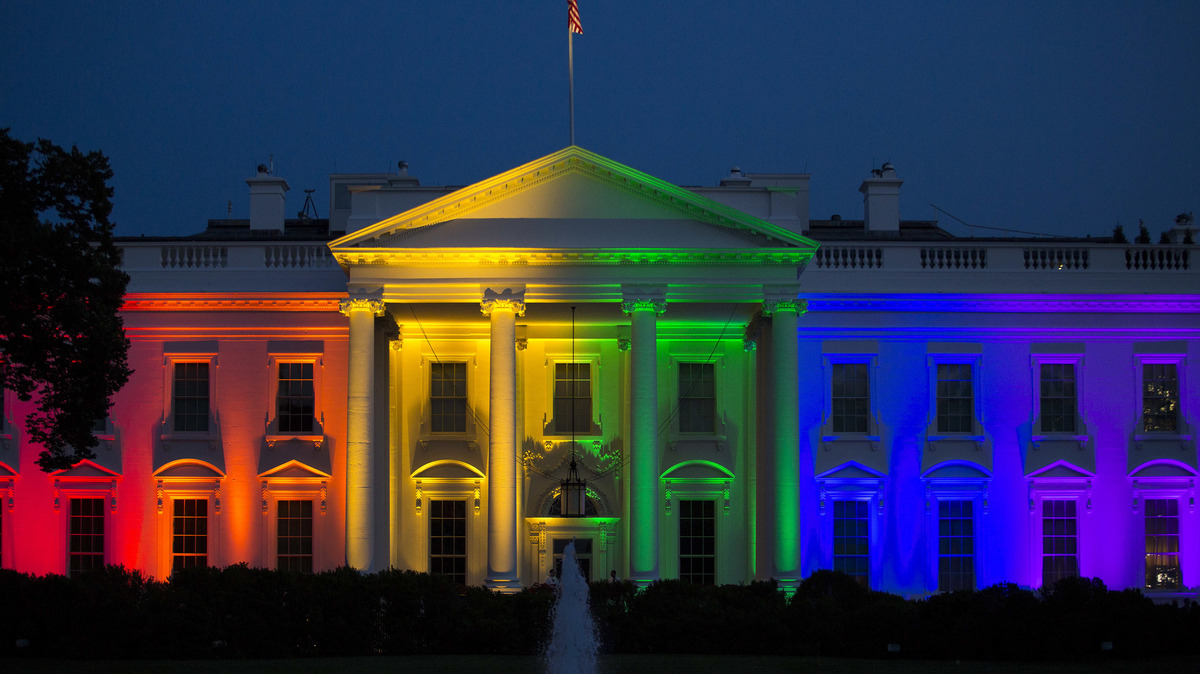 The White House was illuminated in rainbow-colored light on June 26, 2015, after the Supreme Court issued a ruling that made same-sex marriage legal nationwide.

"It said to 10 million Americans — myself included — who had felt like an unwelcome presence, it said, 'You belong. And we're proud of you. And more to the point, we're proud of ourselves for being a part of bringing this moment to fruition,' " Wolff said.

And just maybe, that was Obama's plan all along: to create the space for a national evolution on gay rights. Many of the president's early critics have come around to that point of view.

Socarides recalls a story that Obama liked to tell about Franklin Roosevelt. After meeting with labor activists in the 1930s, Roosevelt supposedly told them, "I agree with you. Now, make me do it."

"No one questioned that Barack Obama's heart was always in the right place on gay rights," Socarides said. "He just needed the pressure that we put on him and the political support. What seemed like someone who was not willing to act so boldly, to now we see it's probably one of the most important parts of his legacy."

Obama, who often takes the long view, predicted as much during that first Pride reception seven years ago.

"We've been in office six months now," Obama told impatient activists at the time. "I suspect that by the time this administration is over, I think you guys will have pretty good feelings about the Obama administration."