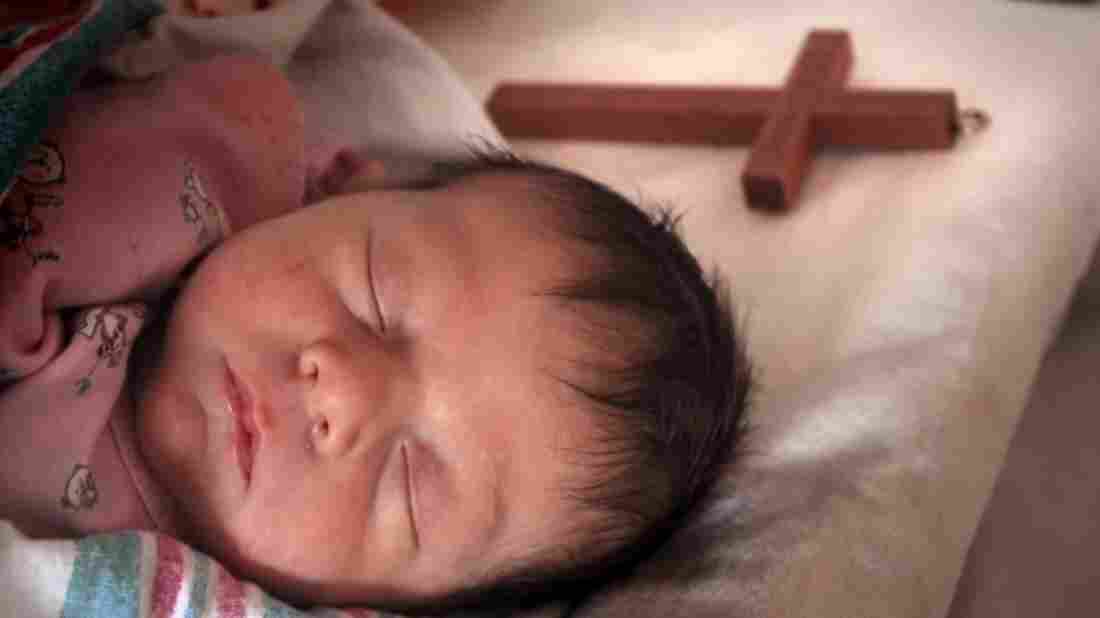 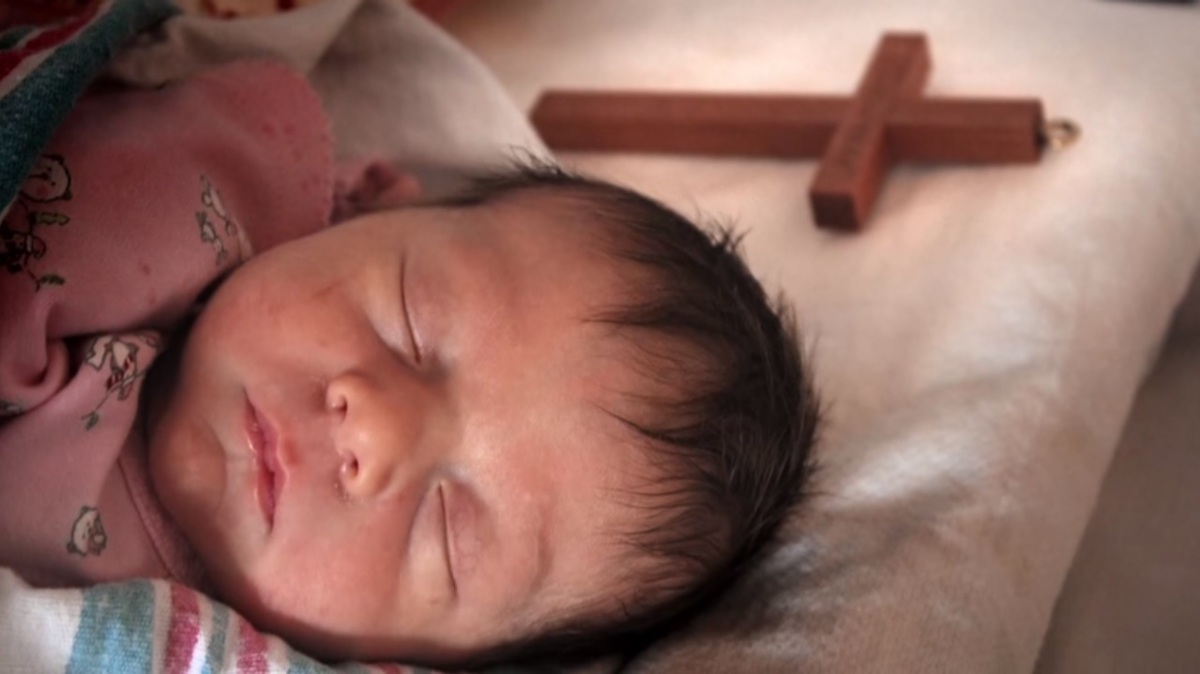 A screenshot from the new pro-Clinton superPAC ad attacking Donald Trump for his comments mocking a disabled reporter.

You'd be forgiven for mistaking the beginning of this new ad running in several battleground states for a message from a conservative Christian group.

The television ad, called "Grace," opens with a white, Midwestern couple recalling the moment they saw an ultrasound image revealing that their daughter would suffer from the disabling condition spina bifida. The camera pans to pictures of the girl — whose name is Grace — as an infant, and later, as a young child in a wheelchair.

In the ad, her mother, Lauren Glaros, describes Grace as "a total blessing in our lives." Her father, Chris Glaros, says "she brings out the goodness in each person." In one photo, a cross rests alongside baby Grace's bassinet.

There's an emphasis by many conservative, anti-abortion circles on praising parents who choose to carry such pregnancies to term. People with disabilities are mentioned specifically in the mission statement of the National Right to Life, a leading anti-abortion-rights organization, as a group deserving of protection.

But this is not an anti-abortion group touting the virtues of giving life to a disabled child. Instead, it's an attack on Donald Trump from the Democratic superPAC Priorities USA Action, which is the main outside political group working to bolster Hillary Clinton.

The couple, from Columbus, Ohio, look into the camera and describe their "shock" at Trump's actions last November, when he curled his arms close to his body and waved them wildly, appearing to mock a disabled reporter.

"When I saw Donald Trump mock a disabled person, I was just shocked," Lauren Glaros says. "The children at Grace's school all know never to mock her, and so for an adult to mock someone with a disability is shocking."

Chris Glaros puts his feelings in almost religious terms: "When I saw Donald Trump mock someone with a disability, it showed me his soul. It showed me his heart."

Trump later said he was not mocking the reporter's disability, telling supporters at a rally, "I was very expressive in saying it, and they said that I was mocking him," Trump said. "I would never mock a person that has difficulty. I would never do that. I'm telling you, I would never do it." Trump also declined to apologize for the incident, saying he'd been misunderstood and that he deserved an apology.

Several of those states, including Virginia, Ohio, Iowa, and Colorado, have substantial conservative Christian populations. Polls suggest that while self-identified evangelicals — a reliable Republican voting bloc — have largely supported Trump, those who attend church regularly are less likely to back the real estate mogul. Many are wrestling publicly with how to vote in November.

But don't count on this kind of messaging to woo many conservative Christians over to the Democratic side, according to Russell Moore, president of the Southern Baptist Convention's Ethics & Religious Liberty Commission. Moore has been a frequent critic of Trump, recently calling him a "lost soul" who needs to "repent." But in a message to NPR, Moore called the Priorities USA ad "powerful until the very end, when one discovers that it is for Hillary Clinton."

Moore noted Clinton's support for abortion rights, adding, "This year, the duopoly on parties have given us two horrible choices when it comes to questions of human dignity."

But Moore adds that some evangelicals concerned about Trump — especially younger conservative voters — plan to vote for Libertarian nominee Gary Johnson, write in another candidate, or skip the top of the ticket.

Whether or not these ads persuade voters to cast ballots for the Democratic nominee, they can have another effect. Some political science research suggests that well-timed and well-crafted negative ads may be effective in reducing turnout among would-be supporters of the candidate who is attacked.

"Everything we do is designed to do both. Obviously it's a negative ad, so this is more about defining Trump than turnout amongst Democrats," Priorities spokesman Barasky said. "You can't do one without the other."

He said they are "under no illusion that Republicans are going to cross over and vote for Hillary Clinton" in large numbers. But the superPAC believes that some Republican voters, as well as a substantial number of independents, are "troubled by the things that Donald Trump has said and done throughout the course of his campaign and his career" and could be persuaded, at minimum, to abstain from casting a ballot for him.

The spot kicks off a $20 million ad buy that will put anti-Trump messages on the air through this summer's Republican National Convention. Barasky said that in the coming weeks, the group's ads will portray Trump as divisive, unqualified to be president, and "willing to prey on people less fortunate than him," as Barasky contended the Trump University fraud lawsuit reveals.

The Glaros family, by the way, has some history of political activism for liberal-leaning causes. In 2012, Chris Glaros posted a letter to the Boy Scouts of America on his Facebook page explaining the couple's decision to remove their son from the Scouts in response to the organization's decision to ban gays and lesbians from serving as Scout leaders. That ban was reversed in 2015.

Baraksy says the goal of the new ad is simply to tell their story to potential voters.

"I'm sure the ad speaks to different people in different ways. But this is who they are. This is their story," Barasky says.