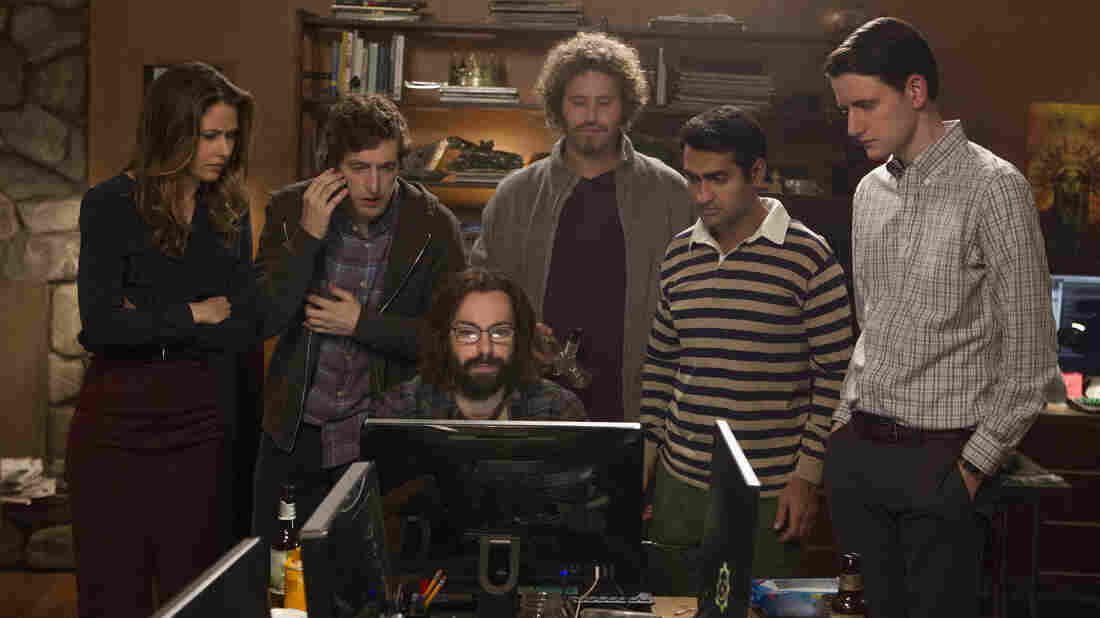 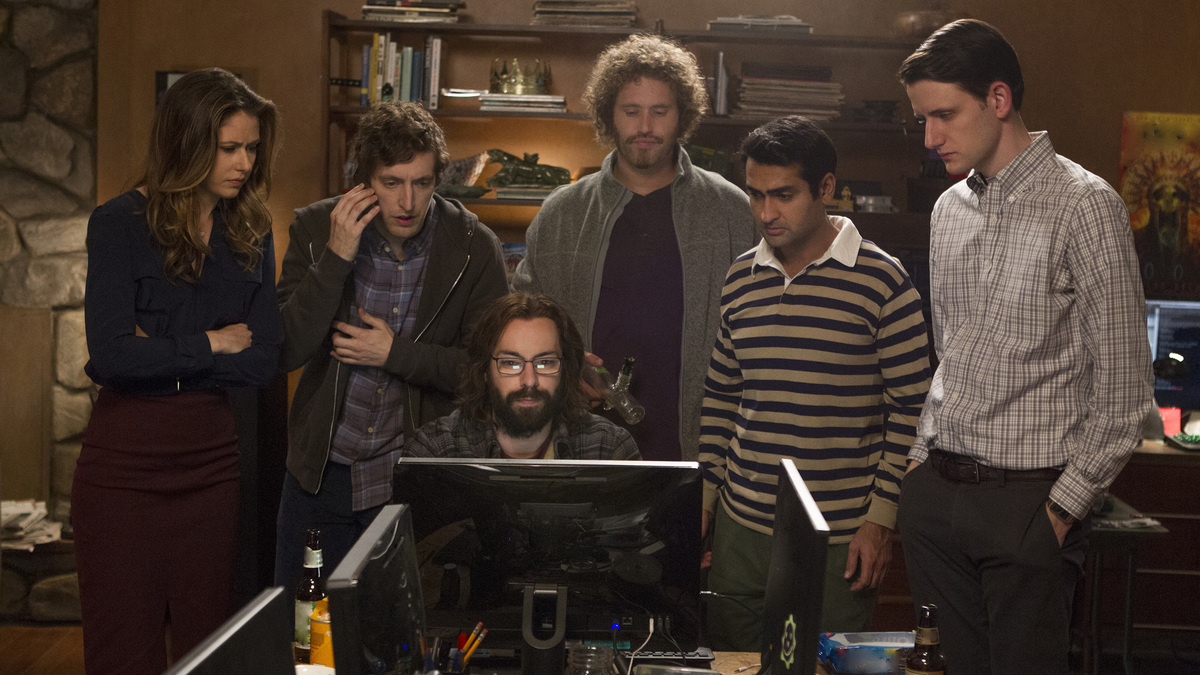 To an outsider, the start-up culture at Pied Piper, the fictional tech company featured in the HBO comedy series Silicon Valley, might seem a little odd. Not only do the company's employees live and work together in an "incubator," they also get into biting arguments about the nuances of whether it's acceptable to type spaces instead of tabs when programming code.

Alec Berg, who serves as showrunner along with creator Mike Judge, tells Fresh Air's Terry Gross that the quirky details viewers see on the show are inspired by real life.

"One of our writers texted a friend who works for Apple just saying, 'Hey is this tabs vs. spaces thing real?' " Berg says. "And his friend ... was out at drinks with a bunch of other engineers and she replied that, A) it is real and B) just talking about it now has sparked a giant, violent debate and they were actually screaming at each other in a bar about whether tabs or spaces were better."

Thomas Middleditch, who plays Richard, the nervous, soft-spoken creator of Pied Piper, adds that real-life tech companies are sometimes so over the top that they leave little room for satire. "It seems like you can't hyperbolize it for a joke hard enough," he says.

Berg and and Middleditch are joined in the studio by Judge, who also created King of the Hill and Beavis & Butt-head.

On their connection to the real Silicon Valley

Mike Judge: I'd worked as an engineer a long time ago, and just have been around the tech world a lot. My ex-wife is from Palo Alto, and I spent a lot of time there, and actually lived up there and worked up there, so yeah, it's pretty far from King of the Hill, but it's something I've been close to a lot of my life. 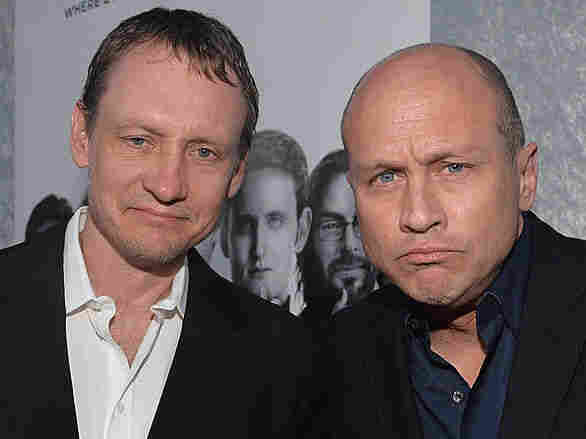 Alec Berg and Mike Judge are co-showrunners on the HBO series Silicon Valley. Berg has also been an executive producer of Seinfeld and Curb Your Enthusiasm. Judge was the creator of King of the Hill and Beavis & Butt-head. Alberto E. Rodriguez/Getty Images hide caption 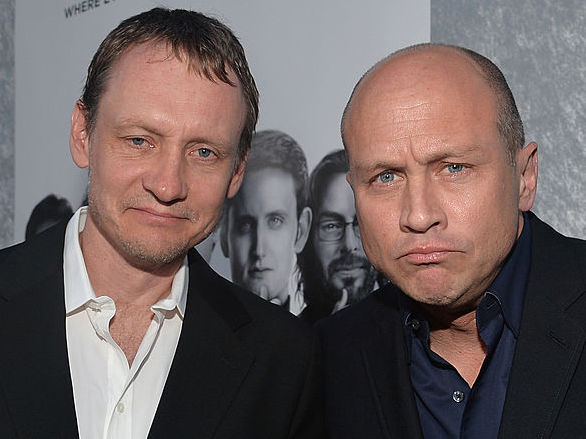 Alec Berg and Mike Judge are co-showrunners on the HBO series Silicon Valley. Berg has also been an executive producer of Seinfeld and Curb Your Enthusiasm. Judge was the creator of King of the Hill and Beavis & Butt-head.

Alec Berg: My father is a biophysicist who builds his own microscopes. My brother was an electrical engineer who has worked at Microsoft and now works at Amazon, so I have some sort of nerd cred in my bones.

On getting inspired by visiting real Silicon Valley offices

Judge: We were at Quora and somebody had taken a watermelon, hollowed it out and put watermelon Jell-O in there and sliced it up like pieces of watermelon. We used that in the show. There are a lot of details like that. Actually, Richard Toyon our production designer goes up there also and takes a lot of pictures.

Berg: It is amazing when we tour companies how almost exactly like our sets they are.

Thomas Middleditch: I did a brief visit at Google X and they have these little push scooters that you can go from one end of the compound to the other, and the floors are very smooth to maximize efficiency of the push scooters. There are kitchens, there's very robust ways of eating. ...

Berg: I think it was Google, right? That they never wanted anyone more than 100 feet from food.

Judge: Little food stations all over the place.

Berg: And then when we toured Google they had this philosophy of they've organized their offices to, and I think their phrase was, "to hard-code serendipitous moments." Which was basically ... an incredibly un-serendipitous way of saying that they wanted people who didn't know each other to be forced to interact with each other, because who knows what could happen.

It's like hippie culture that has run headlong into rampant capitalism.

Berg: It goes back to the whole philosophy of the Bay Area — it's like hippie culture that has run headlong into rampant capitalism.

On why Judge had Pied Piper, the show's start-up company, develop a compression algorithm, instead of an app or gadget

Judge: Part of the problem originally when we were writing the pilot is you go, "OK, whatever app they come up with, if it's really to be believable that this app is successful and in-demand and huge, you would have to believe it would be that way in the real world," and then you'd start to say, "Then why not just go build that app? Why would you be messing around with a TV show when you could go make a billion dollars out in the real world with an app?" It's sort of like if you're doing a movie about a band and then they have a song that's supposed to be a hit, that song has to really be a hit in the real world, otherwise the whole thing seems fake.

I just remember from school that compression was kind of an interesting thing, that there's different kinds and still especially in video there's still probably room for something that could really compress it more. I think it's realistic. I talked to some of my old engineer friends and they said, "Yeah, it's still possible that somebody could up with a game-changing algorithm in that space."

Middleditch: I also think that it being compression, it being a sort of under-the-hood invention or whatever, it adds to the show's credibility. It makes it sort of for us, by us. You know? In terms of engineers and math people, which I think is a huge draw for the show. There's very little Twitter hate of, "Hey, you got that wrong." If anything it's like, "Implausible! Let me show you with my math how it could've been done!"

Middleditch: Anytime we show math on a white board, it's very brief.

On casting the main characters

Judge: Thomas we had always thought of as the lead even though we weren't sure if HBO would go for it. ... The character's name was Thomas up until, like, a half hour before we were shooting, I think.

Middleditch: [Mike Judge] didn't really realize that me and T.J. [Miller] and Kumail Nanjiani and Zach [Woods], we had all known each other for years. I've known T.J. and Kumail for about 10 [years], Zach maybe for about 7, 8. Martin [Starr]'s a new friend but a good one. It turns out we're all buddies who perform live comedy still to this day, which is kind of surprisingly rare for a comedy show.

Berg: The tremendous advantage is that these guys have a rapport, and I think their comradery is real off screen, so I think it lends itself to feeling real onscreen as well. And also they're all super funny guys and they're creators of comic material, so you can give them a script and they can nail all the stuff that's in the script, but then they can also riff on top of it and give you value added, which, of course, it says written by somebody else at the end, so we take credit for all of their work.