Accessibility links
Hillary Clinton Fights To Win Over Her Own Demographic: White Women White women traditionally support the Republican nominee for president. This election season, gaining favor from this group is key to Hillary Clinton's plan to win the White House. 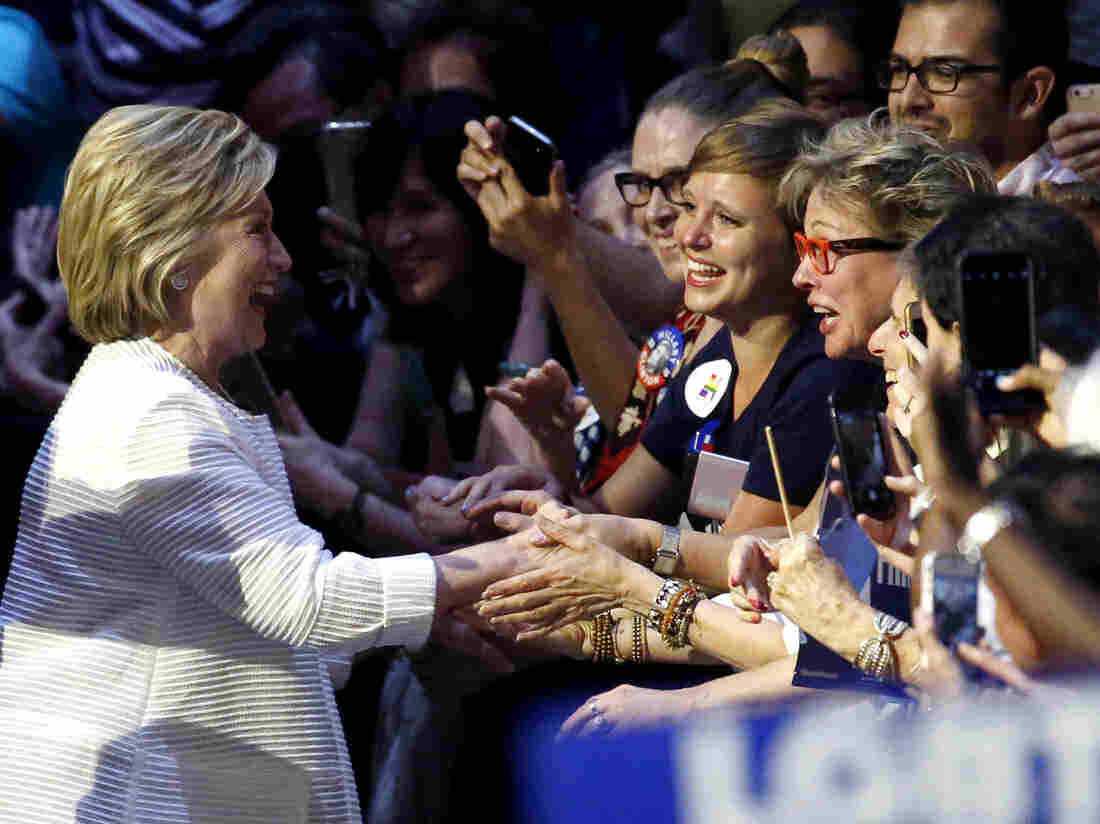 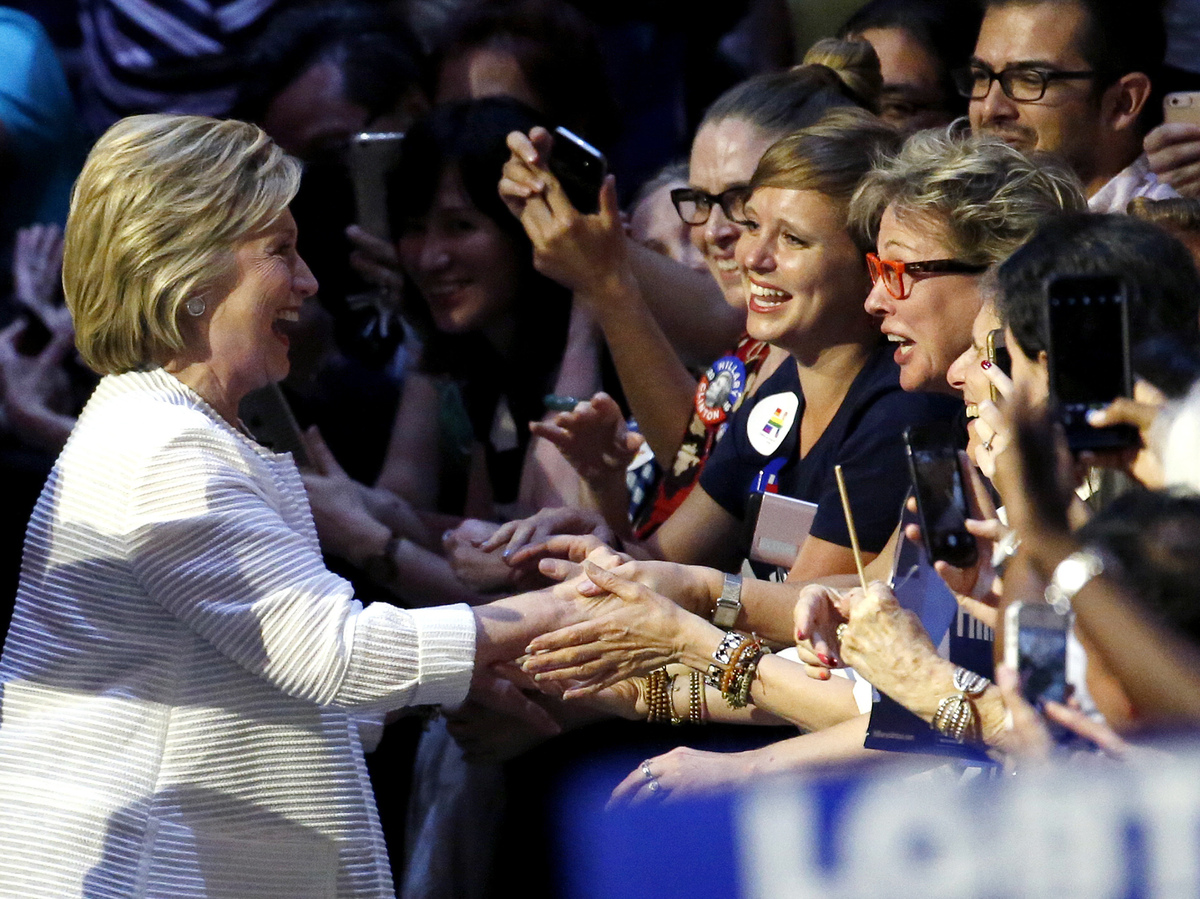 Democratic presidential candidate Hillary Clinton is greeted by supporters as she arrives at a presidential primary election night rally on June 7 in New York.

Women, as a bloc, are loyal Democratic voters. But under that giant gender umbrella, there's a lot of nuance.

White women traditionally support the Republican nominee for president. And this is particularly true of white, suburban, married women.

In fact, President Obama lost white women by 14 points (56 percent to 42 percent) in the 2012 election, according to exit poll analysis.

Shrinking that gap is key to Hillary Clinton's plan to win the White House, particularly to offset any potentially low Democratic turnout among young voters.

And although Clinton will be the first female nominee of a major party, there are questions about whether she can actually win over her own demographic.

The suburbs of Ohio, a key swing state, are a testament to that challenge. Those suburbs are home to two very different kinds of white women Clinton would like to court: women who voted for Mitt Romney four years ago and women like Laura Henry, who voted for Bernie Sanders just a couple of months ago. 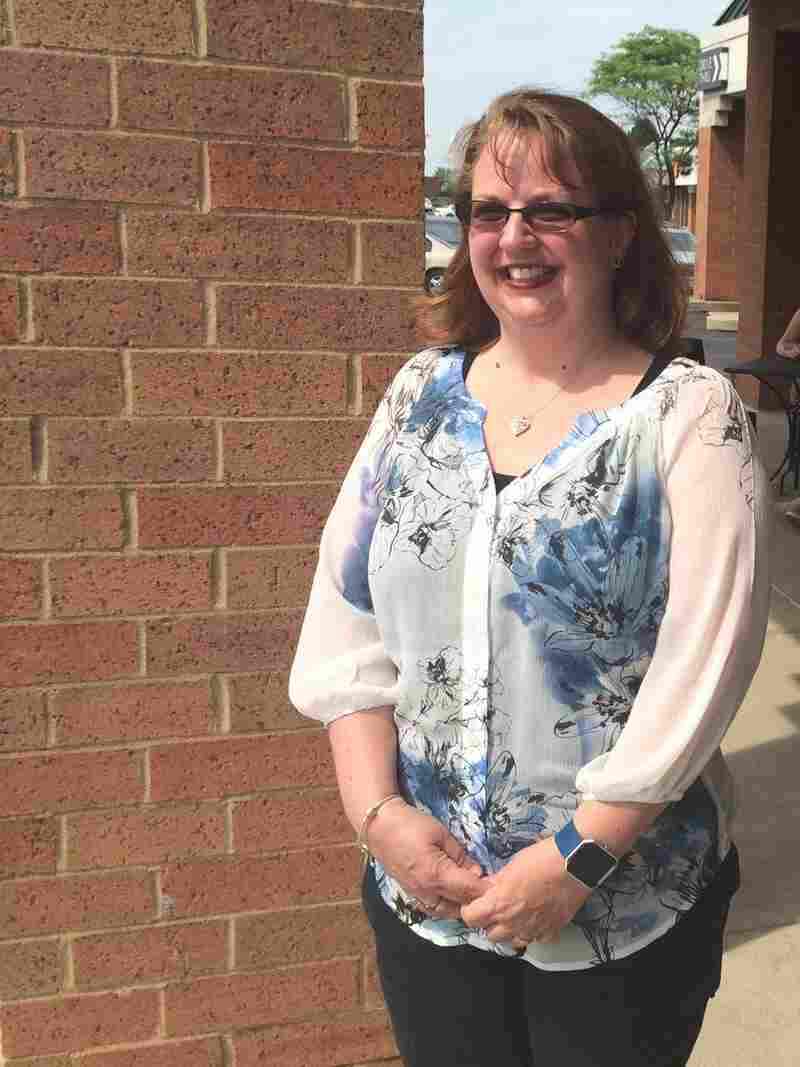 Laura Henry voted for Bernie Sanders in the Ohio primary. As for the general election, "I cannot vote for Trump so, therefore, I will vote for Hillary," she said. Asma Khalid/NPR hide caption 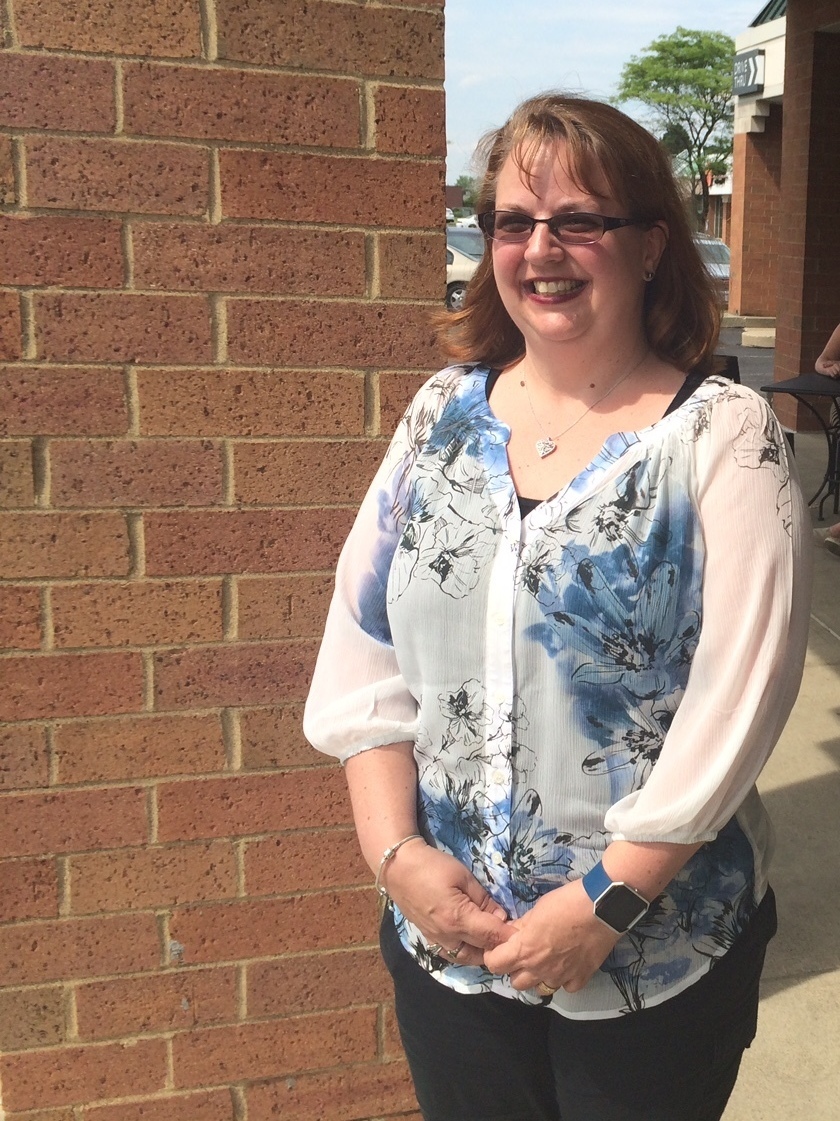 Laura Henry voted for Bernie Sanders in the Ohio primary. As for the general election, "I cannot vote for Trump so, therefore, I will vote for Hillary," she said.

"I feel really terrible about this election because I feel like I've not been left with any good choice," Henry said as she sipped a Frappuccino with colleagues at a coffee shop.

Henry said she has reservations about Clinton and her use of a private email server while acting as secretary of state.

"I don't know if I trust her," she said. But on the other hand, Donald Trump scares her.

"I cannot vote for Trump so, therefore, I will vote for Hillary," she said.

This process of elimination may benefit Clinton when it comes to Sanders' supporters. After all, they already lean left. But what about more conservative women?

Melissa Deckman, a professor at Washington College who focuses on women and politics, thinks Clinton could feasibly win more white women than Barack Obama did four years ago — not necessarily because of her policies, but because she has a Trump card, literally.

"I think the best offense for Hillary Clinton, frankly, is just to keep pointing out how weak and how unpresidential someone like Donald Trump is, and I think it really could help her make inroads to suburban women voters," said Deckman.

The thought of a Trump presidency is a compelling argument for some women, such as Greer Fitzgerald; she considers herself a "fiscally conservative, socially liberal person."

Fitzgerald is meeting up with a group of mothers for a book club discussion in a suburb east of Columbus. As she sits down to dinner, she explains that she voted for Obama in 2008 but flipped to Romney in 2012 because she was frustrated with the pace of the economic recovery. This election year, she has only one political focus on her mind: Trump.

"He's a cartoon. ... He's a misogynistic, completely racially-like inept. I don't know, I'm gonna get flustered," she said, as she trailed off, unable to articulate the rest of her feelings about Trump at that moment.

"I can't even see him as an actual political figure. His foreign policy is to build a wall, well, that's my 3-year-old's policy — to close the door between her and her sister so they can't get in a fight anymore," she said.

Fitzgerald is crossing her fingers for a third-party candidate but, realistically, she says she'll very likely support Clinton.

"I probably will give my vote to Hillary only because I'm more passionate about Trump not getting there than I am about my indifference to Hillary," she said.

But "indifference to Hillary" is rare; Clinton is a polarizing figure for a lot of people. The Real Clear Politics polling average shows 56 percent of people have an unfavorable opinion of her.

And, undoubtedly, many of those people are Republican women. But part of Clinton's "winning white women" strategy must include reaching Republican women who are disenchanted with the presumptive GOP nominee.

Sarah Minto is one such Republican. She lives in an affluent suburb north of Columbus with three teenage kids. She's the type of Republican who appeared in a campaign ad for Romney in 2012 but also voted for Obama in 2008.

This year, she supported Ohio Gov. John Kasich in the primaries. She says Trump makes her "stomach turn."

"He has no real policies," she said. "To me, he's in it for himself. He's very self-centered and will do and take whatever gets him to the top."

And so, in theory, she said she would be willing to cross the aisle.

Minto said she wouldn't necessarily admit this to her friends, but she kind of likes Hillary Clinton. "She would be the first woman president, which means she would probably do a pretty good job of running the country because she wants to show that women are capable," said Minto.

But she, too, is deeply concerned about Clinton's emails.

"She can't be trusted. She just lies over and over and she doesn't think it's a big deal," said Minto.

And so Minto feels stuck; her dislike for Trump's temperament is matched with a distaste for Clinton's behavior.

She says she's a forgiving person and Clinton could hypothetically win her vote.

But she's highly skeptical Clinton would ever do that.

So, this November may be an unprecedented election for Minto.

"I have never not voted in a presidential election ... this may be the first year in my life that I do not vote for a president," she said.

But if Clinton wants to win the suburbs, she needs to convince women like Minto that a vote for her is better than an abstention.