Accessibility links
'Genius' Is, As The Saying Has It, 10% Inspiration, 90% Perspiration The editor Maxwell Perkins discovered and nurtured authors like Hemingway and Fitzgerald. The new movie Genius has him wrangling thousands of pages from the writer Thomas Wolfe. 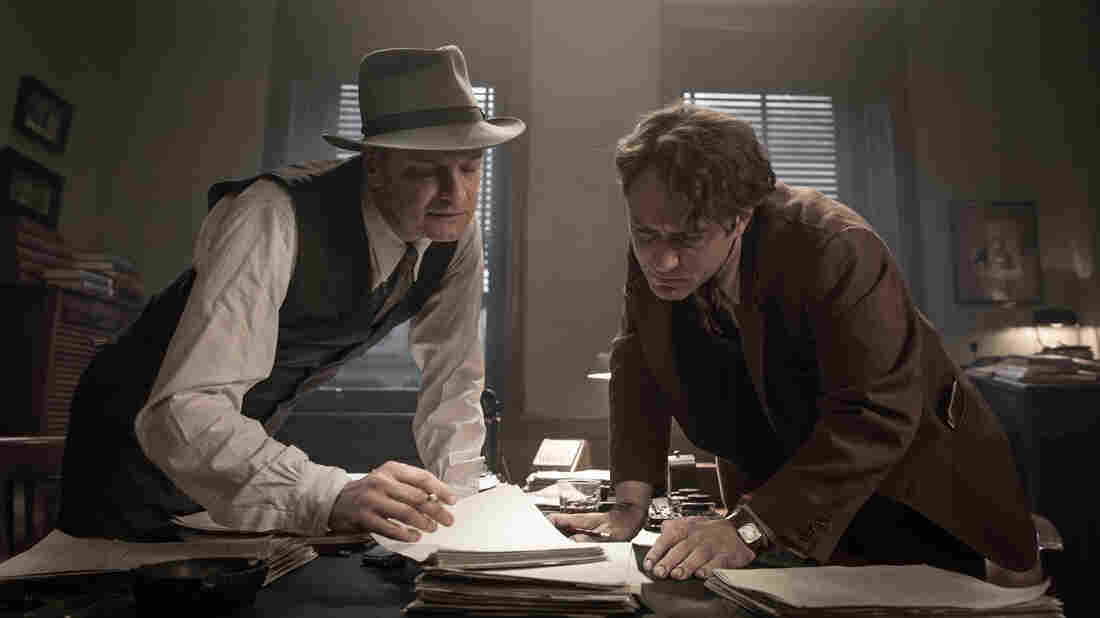 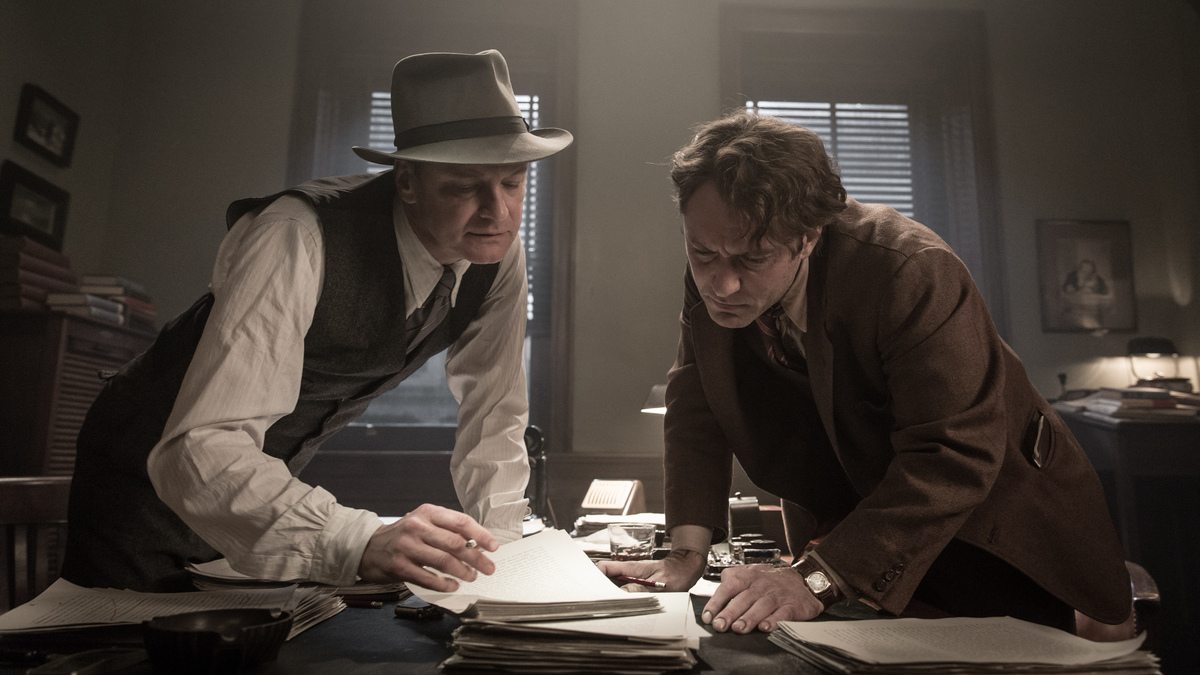 Genius does its best to make the editing process between Max Perkins (Colin Firth) and Thomas Wolfe (Jude Law) kinetic.

The Roaring '20s are in full roar when we meet fabled editor Maxwell Perkins in Genius, but to look at him, his nose perpetually buried in a manuscript, you'd never guess he is walking through a New York that's populated by flappers and swells swilling bathtub gin.

On the street, on a train, in his office awaiting a new writer, this chaperone to Scribners scribes (who included Ernest Hemingway and F. Scott Fitzgerald) is not at all a demonstrative man. As played by Colin Firth, in fact, you'd be likely to call him "unreadable."

That's as opposed to then-unpublished novelist Thomas Wolfe, who at the age of 28 is demonstrative to a fault as played by Jude Law. Storming into Perkins' office to say — in a torrent of verbiage that mimics his prose style — that he quite prefers to be rejected by mail, he is momentarily silenced by the editor's quiet, "We intend to publish your book."

The manuscript he has submitted — then called O, Lost, but eventually titled Look Homeward, Angel — is many thousands of words too long. And Wolfe, not being what you might call, disciplined (he scribbles in longhand on scraps of paper piled atop his refrigerator), is not inclined to part with many of them.

Coddled by his married mistress (Nicole Kidman, stern and forbidding), and barely tolerated by Perkins' somewhat neglected wife (Laura Linney, fuming quietly), Wolfe is used to battling the world solo and doesn't quite know what to do with an ally, let alone a cajolingly friendly father figure. He'll learn.

Filmmakers have a notoriously difficult time capturing a writer's creative process because there's nothing cinematic about an author hunched over a typewriter. An editor's process? Oy. But Genius takes a serious stab at making it kinetic. Perkins at one point reads a passage about love at first sight, his voice caressing every word. Firth makes it sound like Shakespeare, words cascading from him in a rush. Gorgeous ... just gorgeous, you think to yourself.

And then he takes out his red pencil.

Director Michael Grandage hails from the stage. So does screenwriter John Logan, so where films about writers are often filled with raised eyebrows rather than raised voices, these guys actively encourage grand gestures. Like the characters, they are intoxicated — not just by jazz or bootleg liquor, but by words.

By the time they're finished with that particular passage about love, editing in offices, and speakeasies and train terminals, they've eliminated hundreds of the pesky things, but the remaining 25 are worth shouting above the din of a train pulling out of the station: "Eugene saw a woman. Her eyes were blue. So quickly did he fall for her that no one in the room even heard the sound."

"End of Chapter 4," bellows Wolfe as the train recedes.

Is it too much? Well, sure. Genius is more Thomas Wolfe than Max Perkins, you might say. The film has not fared well with critics, possibly because critics are used to being edited and thus are not inclined to think of editors as heroic.