Accessibility links
The Future Of Cuban Sci-Fi Is 'Super Extra Grande' In Super Extra Grande, Cuban sci-fi author Yoss imagines a world where faster-than-light travel has brought humanity into contact with a vast array of strange and marvelous intergalactic creatures.

The Future Of Cuban Sci-Fi Is 'Super Extra Grande'

The Future Of Cuban Sci-Fi Is 'Super Extra Grande' 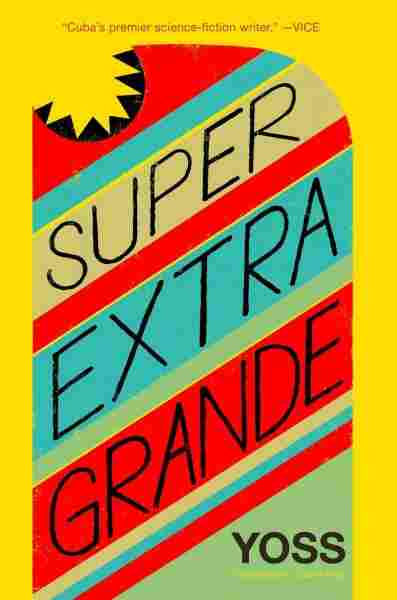 The most compelling science fiction is the sort which holds weight beyond its sheer inventiveness or even its ingenuity. It takes more. The best in the genre have always functioned like corner prophets reporting from the fringe. They succeed in showing us, in a vision uniquely their own, what could potentially become of our planet should we continue down a particular path. Which is not to say one shouldn't devour the purely entertaining for its own sake. But surely the most evocative sci-fi is the stuff of warning shots.

"Science fiction," says the novelist José Miguel Sánchez Gómez, who goes by the pen name Yoss, "is the only literature today capable of capturing not only the decisions we're making in the present, but also the consequences these decisions can have on our future."

Over the last few years, Cuban sci-fi has received some overdue attention stateside — due in part to the historic changes slowly taking shape in the island nation. From the works of Augustín de Rojas, the late biologist long considered the father of Cuban sci-fi, to Yoss — who now carries the torch passed down from de Rojas — there is much to discover.

Yoss's latest novel Super Extra Grande is a work of welcome imagination, steeped in science and imbued with satire and philosophy. Translated by David Frye, it centers on the life and times of Dr. Jan Amos Sangan Dongo, the self-described "Veterinarian to the Giants."

After an Ecuadorian priest named Father Salvador González formulates a theorem that enables faster-than-light space travel — subsequently winning him the Nobel Prizes for physics and mathematics — humankind has an unexpected path to the stars.

I kept imagining the novel causing a stir during the peak of Fidel Castro's reign, the dictator pacing like mad and shouting "Que locura!" at the mention of multisex species and atomic fusion.

But Yoss's cosmos isn't just the human race's own private playground — "a handful of other intelligent races were already nosing around out there." Sangan Dongo's job is to study and operate on an array of intergalactic species of varying shapes, sizes, and temperaments — from the 20-meter-wide crustaceans known as Grendels to sea worms and massive eyeless and earless amoebas from the planet Brobdingnag. Luckily, the doctor, a human, is quite large himself at just under eight feet tall; what his parents once saw as a partial handicap ends up working in his favor.

But when a giant amoeba accidentally swallows two of his former assistants, the human Enti and the Cetian An-Mhaly ( who both happen to love him), Sangan Dongo must rise to the occasion. He knows he's the only one capable of safely making his way into the creature's nearly two hundred kilometer wide innards. His rescue mission is a necessary but risky one, as the slightest mistake or miscalculation could bring about the total annihilation of the two prized prisoners. What follows is a hilarious ride that carries captivating political undertones.

Where Yoss's 2015 book A Planet for Rent was a series of linked stories revolving around a dystopian and altogether bankrupt human civilization, Super Extra Grande differs greatly in both form and focus. One of the most endearing elements of the novel is the use of Spanglish that is peppered throughout. The give and take between Sangan Dongo and his lab assistant Narbuk, a member of a reptilian class called Laggoru, speaks to a highly probable future in which jumbled English and Spanish is an embraced universal dialect.

Not unlike his main character, it's evident that Yoss — as an artist and cultural anthropologist — is intent on doing the dirty work, on digging through the ugly insides of human identity in order to arrive at something pure and lasting. I kept imagining the novel causing a stir during the peak of Fidel Castro's reign, the dictator pacing like mad and shouting "Que locura!" at the mention of multisex species and atomic fusion. But Yoss seems more concerned with looking ahead. And in Super Extra Grande, he reconfirms that a future without a literature of the future is really no future at all.