Accessibility links
Why Aren't There More Women In Politics? Women are finally at the top of a major-party presidential ticket, but they're still far underrepresented among lawmakers. 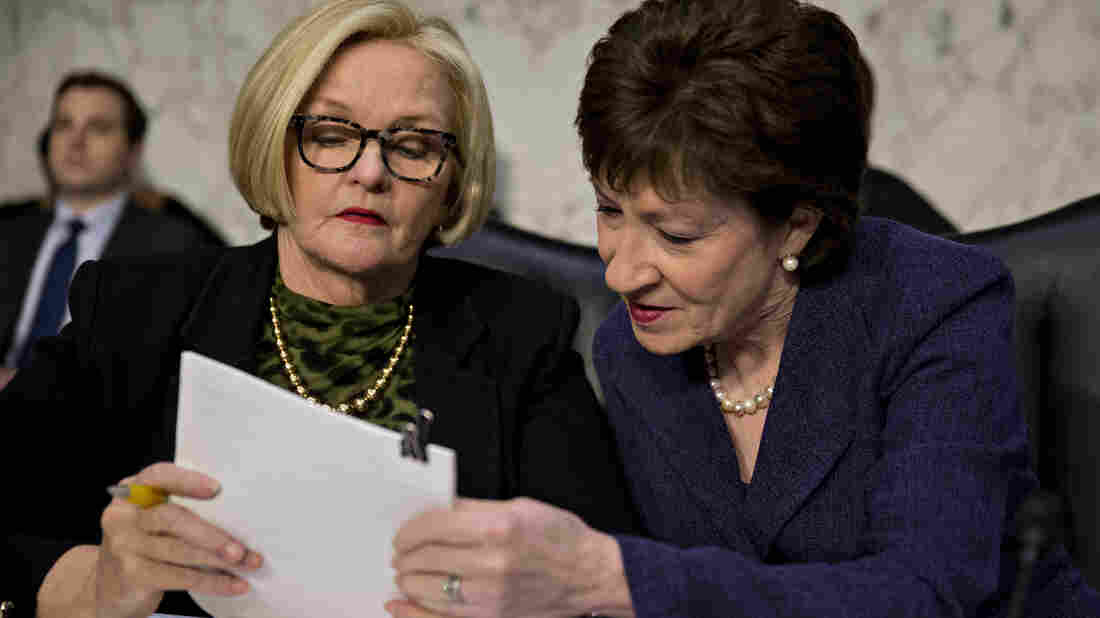 Sen. Susan Collins (right), a Republican from Maine and chairman of the Senate Special Committee on Aging, speaks with ranking member Sen. Claire McCaskill, a Democrat from Missouri, before the start of a hearing in April. Bloomberg via Getty Images hide caption 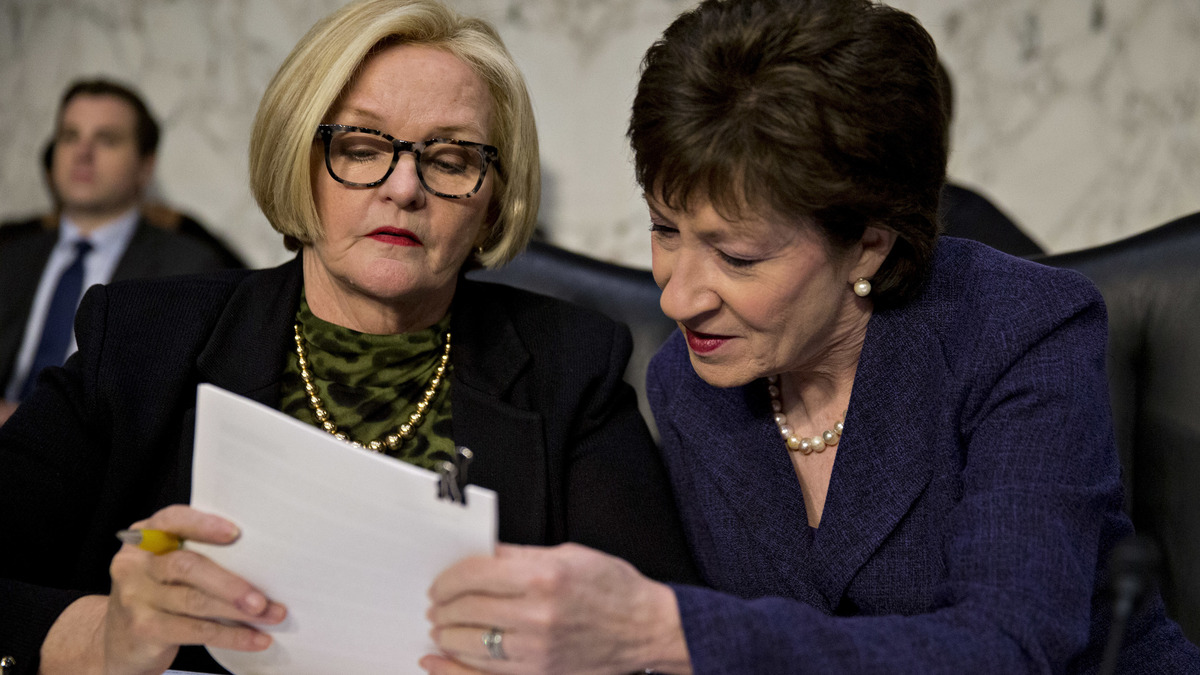 Sen. Susan Collins (right), a Republican from Maine and chairman of the Senate Special Committee on Aging, speaks with ranking member Sen. Claire McCaskill, a Democrat from Missouri, before the start of a hearing in April.

The amendment guaranteeing women voting rights is nearly 100 years old, but women have only recently become regulars in major parties' presidential nomination fights. All those decades of slow progress culminated this year in Hillary Clinton becoming the first woman who is the presumptive nominee of a major party.

That slow creep into presidential campaigns reflects a larger trend: Women make up a bigger share of national and state lawmakers than ever, and yet the share of women in major political positions remains disproportionately low. Women make up around 19 percent of all members of Congress and less than 25 percent of all state legislators. They also make up six of the nation's 50 governors, or 12 percent.

For comparison, here's how that stacks up to a selection of other jobs in America.

From one standpoint, those are just some interesting comparisons — Huh. Women make up about as big a share of Congress as they do the clergy.

But there's some real perspective here. For one thing, a substantial chunk of the clergy has to be men. Several large American religious denominations, including Roman Catholicism, which accounts for 1 in 5 U.S. adults, for the most part do not allow women to be ordained. Lawmaking of course has no such restrictions, but Congress' women's share is still stuck where it is among clergy.

Likewise, while many Americans may not think of lawmaking as a man's job, state legislators and governors are in the same neighborhood, proportion-wise, as stereotypically masculine jobs, like ranchers and cops.

But then, it's also true that 100 percent of all presidents have been men, and all but one have been white men. The presidency has remained relatively homogenous, and it's the most prominent example of just how much women aren't involved in the highest levels of politics.

Where The Numbers Stand

Here's a look at women as a share of congressional members, state legislators, and governors has changed over the years.

The share of state legislators who were women took off starting in the 1970s, according to data from the National Conference of State Legislatures. But it has leveled off since 2010. In governors' mansions, the share of female governors spiked at 18 percent (that is, nine governors), in 2004 and 2007.

In Congress, one major spike that sticks out is 1992, the so-called Year of the Woman. In the next year's Congress, the number of women climbed from 29 to 47, and four new women also entered the Senate, bringing the total of female senators to six. (Texas Republican Kay Bailey Hutchison became a senator shortly thereafter, in June 1993, bringing the total in that Congress to seven.) Today, there are 104 women in Congress — the highest total ever, but still far lower than women's total share of the population.

Why Aren't More Women In Office?

Americans have warmed to the idea of a woman as president over the years. In the 1960s, just over half of Americans said they could vote for a woman for president, a share that rose quickly over the next few decades, according to Gallup. And in 2015, 92 percent of respondents said they'd vote for a "generally well-qualified" woman from their party, roughly similar to the share who said the same of Catholics and blacks.

In which case, what's keeping women out of office?

One huge issue is that women aren't getting on the ballot in the first place. In a 2012 report, American University professor of government Jennifer Lawless and Loyola Marymount University political science professor Richard Fox studied "potential candidates" of both genders — people like lawyers and activists who might reasonably get involved in politics — to determine what was keeping women from running.

They came up with seven main barriers to women running for office. In the authors' words:

There's evidence of that among women at both the national and state level. Female members of Congress from both parties told NPR's Tamara Keith in 2014 that women need an extra nudge (or three) before they finally decide to run for office. Women state lawmakers likewise told NPR earlier this year that they had to be talked into running.

And there's also a reinforcing element to women's lack of representation in politics — that is, that women in office appear to help attract more women to office. An analysis from Obama's 2012 Analytics Director Amelia Showalter (highlighted by Vox's Matt Yglesias this week) found that electing a woman to a major office like governor or U.S. senator today is associated with a 2 to 3 percent increase in women's representation in state legislatures four years down the road.

Showalter's findings aren't necessarily separate from Lawless and Fox's list; it's possible that if more women campaigned, other women would react less negatively to campaigning, or they might be more likely to consider themselves qualified.

There's also a partisan split in Congress; there are 22 Republicans compared to 62 Democrats in the House (by the Center for American Women in Politics' numbers) and 6 Republicans to 14 Democrats in the Senate. Why do Republican numbers remain lower than Democrats'? Polarization may be a reason, as the New York Times' Derek Willis wrote last year.

Growing Diversity Of All Types

Women aren't the only underrepresented group in politics. Minorities are also relatively few on the Hill — at the start of this Congress, 17 percent of members were nonwhite, compared with 38 percent of the population, according to the Pew Research Center.

Likewise, Congress is far more heavily Christian than the rest of the nation. Around 8 percent of congressional members at the start of the 114th Congress were non-Christians, compared with 27 percent of American adults, according to Pew.

Still, Congress is far more diverse than it once was, and the presence of those groups is likewise becoming more commonplace on the campaign trail. This year's massive presidential field was also remarkably diverse, including two women, two Latinos, one Jew, one Indian-American, and one African-American among the major-party candidates. (In addition, Democratic candidate Lawrence Lessig "has been vague on his personal faith," as Religion News Service reported last year.)