Accessibility links
Wherefore Art Thou Romeo? Well, He Doesn't Have To Be What if Romeo and Juliet had lived? In Ryan North's new "chooseable-path adventure" Romeo and/or Juliet, you can make sure the two never meet — or have them take over Verona in giant robot suits.

In Romeo and/or Juliet, the "star cross'd lovers" don't necessarily have to die. Instead, they might put on robot suits and conquer Verona. David Hellman/Riverhead Books hide caption

In Romeo and/or Juliet, the "star cross'd lovers" don't necessarily have to die. Instead, they might put on robot suits and conquer Verona. 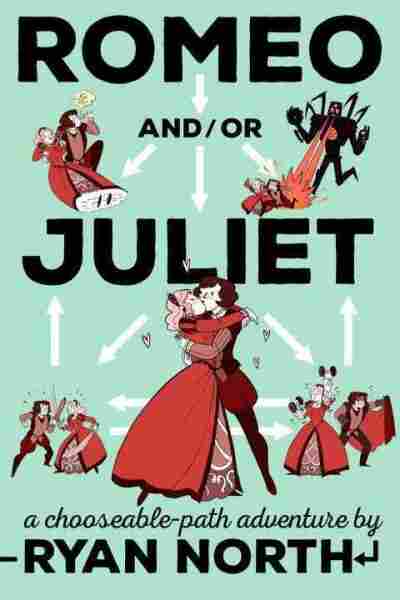 by Ryan North and William Shakespeare

But what if it didn't have to be that way? In his new Romeo and/or Juliet, author and cartoonist Ryan North has set up the story so a reader can make choices in the plot-- veeeeeery different choices than Shakespeare's "star cross'd lovers." North tells NPR's Scott Simon he calls it a chooseable path book, "meaning the reader is in charge of what happens. So you'll reach many points in the story where the book will say, okay, you're playing as Juliet, now, if you want Juliet to kiss Romeo, turn to this page, but if you want Juliet to slap him across the face, go to this page instead."

On whether this is a gimmick

I don't think so. I think it's a different way of exploring the story. If it were a gimmick, it would be a lot shorter — I wouldn't have written 110,000 words about it!

On what he gets from telling the story this way

For me, I get a much deeper understanding of the story, and I hope for readers, they get a sense of how these stories — they're meant to be fun, right? Shakespeare wrote these plays for entertainment. They were something you did for fun, and now we study them in school and they become homework, and when a book becomes homework, it's sort of hard to make it fun again. But in this format where you're choosing what happens, and you get to see what would happen if these characters zigged instead of zagged, you sort of capture that sense of fun again, and bring the story back to life.

On Shakespeare's mixing of comic and tragic

Well, the nice thing with Shakespeare from a modern point of view is that a lot of stuff that was tragic for him can read as comic for us. I think a good example would be the way Juliet's nurse takes a whole day to find Romeo. And in the play, it's just brushed aside, no one comments on it. But when you're reading the book, a careful reading, you realize this woman takes easily three hours to find Romeo, and it seems like there's a mystery there: What is she doing that's taking so long, and why is it taking so long? And it's sort of fun to fill in those blanks.

You know what these characters are supposed to be like, and when you kind of push them off the rails a little bit, there's a sense of breaking the rules that's a lot of fun.