Accessibility links
After Orlando Shooting, What Donald Trump Meant When He Said Obama Has 'Something Else In Mind' Even though the "birther" issue has long since faded, Trump has continued to subtly question whether Obama is a Christian — and he was back at it in the aftermath of the Orlando massacre. 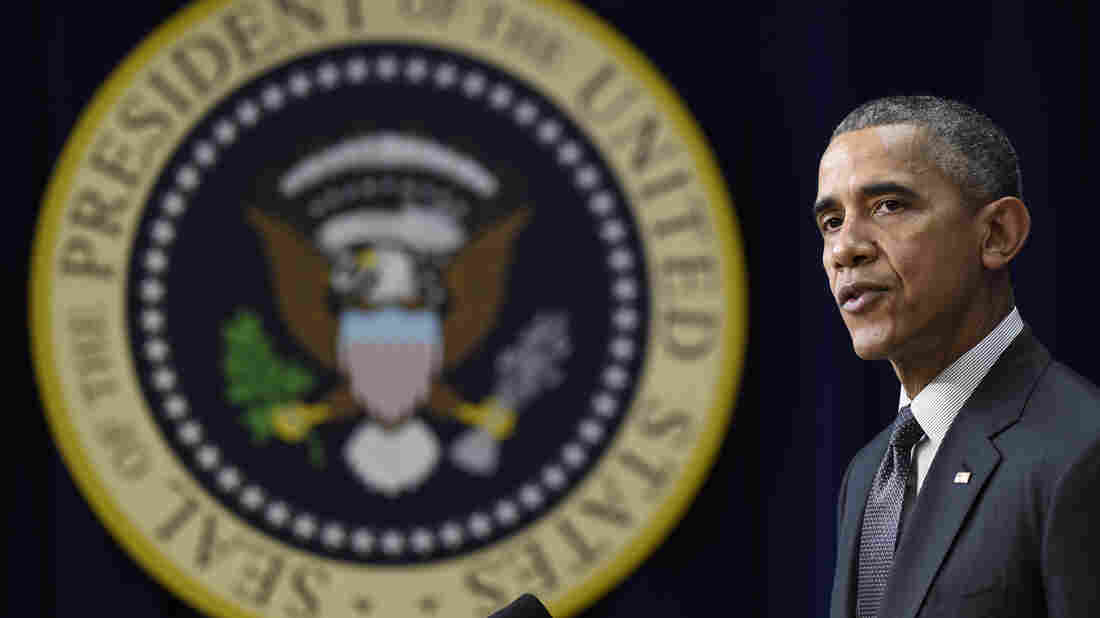 "Look, we're led by a man that either is not tough, not smart or he's got something else in mind," Donald Trump said Monday on Fox News. "He doesn't get it or he gets it better than anybody understands – it's one or the other and either one is unacceptable." Susan Walsh/AP hide caption 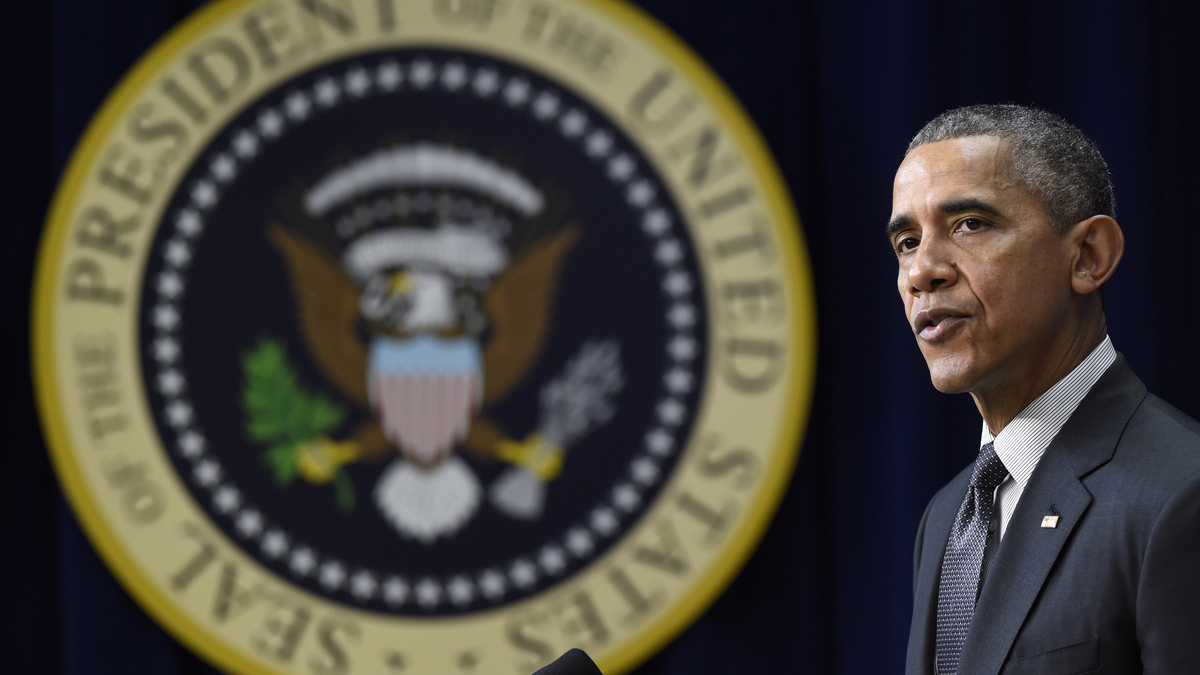 "Look, we're led by a man that either is not tough, not smart or he's got something else in mind," Donald Trump said Monday on Fox News. "He doesn't get it or he gets it better than anybody understands – it's one or the other and either one is unacceptable."

Americans were still waking up to the worst mass shooting in U.S. history Sunday when Donald Trump popped up on Twitter, boasting about his call to ban Muslims from entering the U.S. and calling on President Obama to resign.

He tweeted: "Is President Obama going to finally mention the words radical Islamic terrorism? If he doesn't he should immediately resign in disgrace!"

Is President Obama going to finally mention the words radical Islamic terrorism? If he doesn't he should immediately resign in disgrace!

"In his remarks today," Trump said later Sunday in a statement, "President Obama disgracefully refused to even say the words 'Radical Islam.' For that reason alone, he should step down."

On Monday, Trump toured the morning TV talk shows in person or by phone, touting his December pledge to bar Muslims and saying those who disagreed with him were victims of "political correctness" that was putting the country in danger.

The president and others have often explained their aversion to the "radical Islamic terrorism" formulation, saying it demonizes Muslims in general and so plays into the hands of terrorist recruiters in the larger Islamic world.

But Trump sensed something else at work, something sinister. Or so he strongly implied.

"Look, we're led by a man that either is not tough, not smart or he's got something else in mind," Trump said on Fox News. "He doesn't get it or he gets it better than anybody understands — it's one or the other and either one is unacceptable."

Questioned further as to his point, Trump told NBC News' Savannah Guthrie that "a lot of people" thought maybe the president "doesn't want to get it ... doesn't want to know about it."

Trump said he preferred to think the president "just doesn't know what he's doing." But he again referred to unnamed but numerous others who think Obama "doesn't want to see what's really happening."

Adding, finally: "And that could be."

But what is the "it" we are contemplating here? And just what is Trump suggesting so insistently?

Josh Earnest, the White House press secretary, was questioned on this point during his Monday briefing. He said that when something as large as the Orlando shootings was happening, it was "best not to get distracted by something so small."

But fascination persists. Was this a dog whistle? For decades, American politicians traded accusations of being "soft on crime" or "soft on communism." Was Trump's message here that Obama was soft on terrorism? Soft on Muslims?

This is the same Donald Trump, of course, who for years publicly questioned Obama's birthright citizenship. Long after any legitimate doubts about Obama's 1961 birth in Hawaii had been laid to rest, Trump continued to shrug and say he had not personally inspected the birth certificate. Or that he had something about a different childhood itinerary, that Obama had been born in Kenya, raised as a Muslim in Indonesia and brought to the U.S. as an adolescent.

Even though the "birther" issue has long since faded, Trump has continued to subtly question whether Obama is a Christian — and he was back at it following the Orlando massacre.

But was the subliminal message here simply a softness on the part of the president, or something else?

The Manchurian Candidate was a 1959 political novel that became a Frank Sinatra movie in 1962 and a Denzel Washington remake in 2004. It imagined an American POW in the Korean War being brainwashed by communists, programmed many years in advance to commit an assassination on command.

The film was withdrawn from circulation for a time after the assassination of John F. Kennedy in 1963. But a subtle and persistent impact of the story was to popularize the notion of a highly placed individual serving a foreign power in the innermost circles of U.S. politics.

Trump has essentially raised the specter of a Mohammedan Candidate at the very epicenter of U.S. politics.

The Orlando attacks, horrific in every way and deeply upsetting to Americans for any number of reasons, will also be drawn inexorably into the political conversation — especially as both parties are consolidating behind their presumptive presidential nominees.

There was little doubt that Trump would pounce on the shooting, especially as the ethnicity of the shooter became known. In his speech on Monday, Trump departed from his prepared remarks to say shooter Omar Mateen was "born an Afghan." In fact, Mateen was, like Trump, born in Queens, N.Y. His parents were Afghan, however, and Trump later said Mateen had become a problem only because "we let his parents into the country."

Trump has seen his campaign for the presidency gain ground with some voters after previous terrorist attacks, first in Paris in November and then in San Bernardino in December. Both times, Trump's numbers went up, while some of his rival GOP candidates saw theirs decline.

At moments of national trauma, such as natural disasters or the loss of the Challenger space shuttle, Americans naturally turn to their president for reassurance and a show of resolve. In her response to Orlando on Monday, Hillary Clinton referenced just such a moment when President George W. Bush went to a Muslim place of worship days after Sept. 11 to remind the country not to blame Islam for the attacks by al-Qaida.

In the midst of a presidential campaign, we should not be surprised if the nation also turns to the presumptive nominees of the major parties. Those who did had a rare opportunity to imagine either of these nominees as actual presidents, and to compare what each had to offer.