Accessibility links
Book Review: 'League Of Dragons,' By Naomi Novik This week, the NPR Books Time Machine travels back to the era of the Napoleonic Wars for a look at Naomi Novik's Temeraire series, which wraps up this week with the release of League of Dragons.

Temeraire And Laurence, At Peace At Last In 'League Of Dragons'

Temeraire And Laurence, At Peace At Last In 'League Of Dragons' 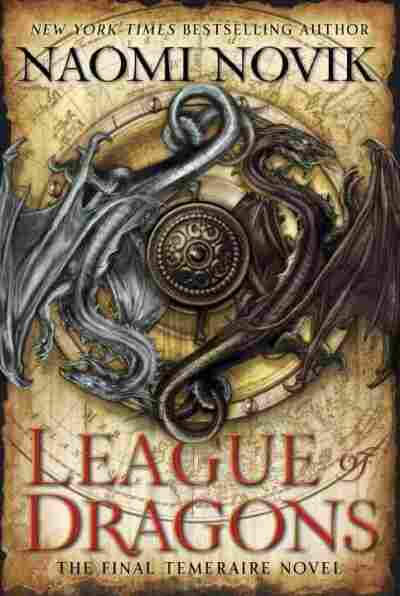 Before we even begin to talk about Naomi Novik's beloved alt-history/fantasy Temeraire series — which concludes this month with League of Dragons — we have to look at the numbers. The first book in the series, Her Majesty's Dragon, came out in 2006. League of Dragons is the ninth. That means over the past ten years, Novik has written upwards of 3,500 pages of the Temeraire series, which at this point probably ought to be called a saga. During that same time, she's written other things too — most notably her Nebula Award-winning, standalone fantasy novel Uprooted. It's tempting to compare Novik's output to another current fantasy series that features dragons (insert obligatory George R. R. Martin wisecrack here), but really, Novik has accomplished something singular with her Temeraire series. It's long. It's sumptuous. At times, it's downright slow. But at its heart, it's a story about friendship that transcends not only time and class, but species.

Friendship may not be in vogue in these days of grimdark fantasy, but Novik couldn't give a fig about trends. Even the backdrop of the book steers clear of the typical fantasy realm — it's Earth in the early 19th century, but an alternate version of our world in which dragons have coexisted with humans for centuries. William Laurence is the captain of a British ship fighting in the Napoleonic Wars, a duty that gets derailed when he captures a French vessel that's transporting a dragon egg. In Novik's reality, dragons are sentient — and they bond with the first human they encounter upon hatching, which in this case happens to be Laurence.

Novik has accomplished something singular with her Temeraire series. It's long. It's sumptuous. At times, it's downright slow. But at its heart, it's a story about friendship that transcends not only time and class, but species.

The captain names the hatchling Temeraire, after the real-world ship made famous by the Battle of Trafalgar, but it's not exactly love at first sight. Laurence has no desire to join the ranks of the aviators, those who fly on the backs of dragons in the name of King and country; to a genteel ship's captain, aviators are strange, secretive and socially unacceptable. But as Laurence comes to respect and then love his swiftly growing dragon, he winds up leaving his commission and starting his career over again — as an aviator trainee in Scotland, shunned by his pedigreed family and forced to navigate this new dragon-and-rider subculture he never dreamed he'd become a part of.

Throughout the next seven novels — Throne of Jade, Black Powder War, Empire of Ivory, Victory of Eagles, Tongues of Serpents, Crucible of Gold, and Blood of Tyrants — Laurence and Temeraire forge a fascinating kinship. Inquisitive and innocent, Temeraire is preciously wise, and his questioning of the 19th-century status quo challenges Laurence's assumptions and privileges. Their bond is tested by treason, deception, exile, shipwreck, political machinations, and gorgeously rendered aerial-and-naval battles that show off Novik's command of both Regency romance and military history.

Not to mention her not-so-secret love of Patrick O'Brien's Aubrey-Maturin series, whose profound bond between its main characters, Captain Jack Aubrey and his ship's surgeon Stephen Maturin, bears a reverential resemblance to the friendship of Laurence and Temeraire. At one point in Novik's series, a case of amnesia comes between the man and the dragon — one of the few beats in the books that feels clumsy. Overall, though, each book thrillingly traces the duo's path around the globe — from Great Britain to China to South Africa to Australia to the Incan Empire to, finally in League of Dragons, Russia — while Temeraire's origins and abilities are gradually revealed.

Napoleon is the main antagonist of the series, and he eventually becomes a character. Even then, though, Novik gives him dimension and sympathy; he stands out against a capacious cast of humans and dragons. Temeraire is a sprawling series, both in scope and in period detail. When the pace drags, as it sometimes does, it's because Novik pauses to linger lovingly on dialogue, backstory, and her intricate intermingling of fictional reality and actual history.

The story is told in the first person, entirely by Laurence, and in lesser hands that would make for a monotonous 3,500 pages. And Laurence, stiff-upper-lipped and bound by duty, is far from the most compelling character in the book. For instance, Jane Roland — a fellow aviator and Laurence's love interest with a preference for men's clothes — steals every scene she's in. But Laurence serves as a lens into the most compelling presence in the books, Temeraire himself, whom Laurence sweetly calls "my dear."

For all the epic bombast and spectacle, the series relishes its quiet moments --Temeraire, unable to hold a book in his ungainly talons, asks Laurence to read to him, and that image, of dragon and man sharing stories with each other, is at the heart of the series. League of Dragons masterfully wraps up so many plot threads and loose ends that had built up throughout the previous eight books, culminating in a showdown in ice-locked Russia; meanwhile Novik never forgets that, as complex as her ideas and plot may get, the very simple notions of friendship and loyalty lie at the heart of the series.

Peter Jackson has optioned the series (although, looking at his track record with Tolkien's work, here's hoping he doesn't turn Novik's books into 27 movies) — but even if it never makes it the big screen, Novik has left plenty of wiggle room at the end of League of Dragons for future novels. The world and characters she's created are definitely fertile enough. At this point, she — along with Laurence and Temeraire — has earned at least a little rest.