Accessibility links
Are GOP Women Warming Up To Donald Trump? Some GOP women in the swing state of Ohio say they'd vote for their party's presumptive nominee even if they don't like him. Others say they can't accept Trump — and simply won't vote in November. 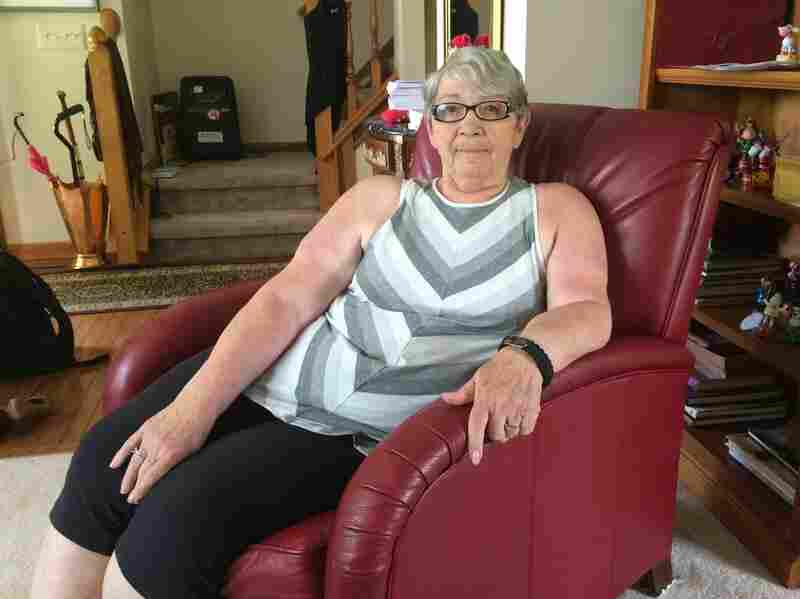 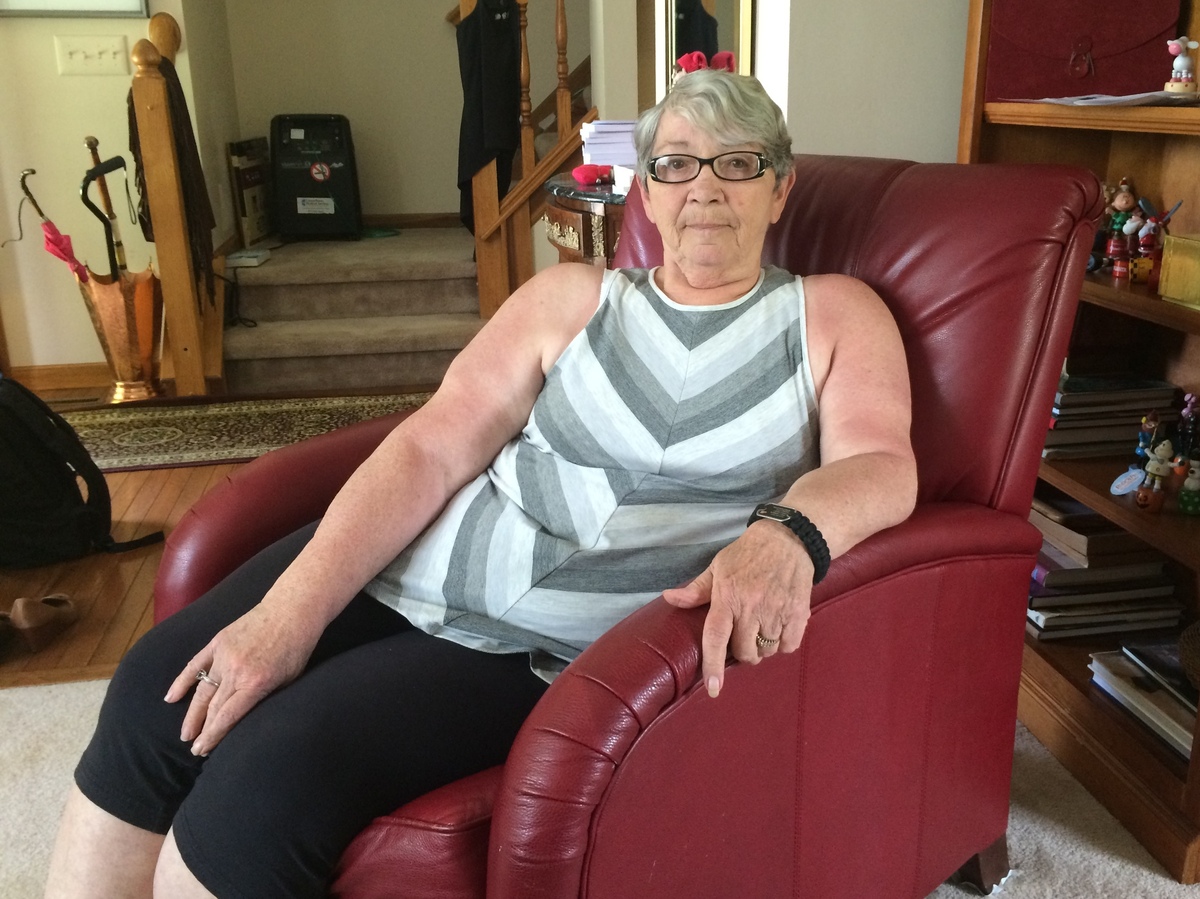 Diana Forrester's top political priority is national security, and she thinks Trump is the best candidate to protect the country.

It's no secret that Donald Trump has struggled to win over female voters. Polls show more than 60 percent of women have an unfavorable opinion of the presumptive Republican nominee.

But, as the campaign pivots to the general election, are Republican women reconsidering Trump? It's this group of largely white women Trump needs in November.

"He is a rough talker, but it's not a big deal. Everybody seems so thin-skinned," says Diana Forrester, a longtime Republican voter. "He's raised some wonderful children, and that tells you a lot about a person."

Outside of her suburban Columbus house, Forrester flies an American flag. Inside, she has pictures of her family — including her son, a National Guardsman who was killed four years ago in Afghanistan by a suicide bomber.

"I don't believe we can continue to go in the direction we're going. We've got to change our direction," Forrester explains over chicken sandwiches and fruit on a hot summer day at her house.

She's upset by President Obama's leadership and his desire to shut down the prison at Guantanamo Bay.

"Why are we arguing about bathrooms?" she asks, referencing the debate around transgender bills. "It makes no sense to me. It's like everyone's gone crazy. ... Our sons and daughters are being killed on foreign soil, and we're worrying about bathrooms?"

Forrester says the Orlando shooting proves, once again, that even on U.S. soil, Americans are not safe.

"You can't send a child to school and be certain they will come home safe. You can't go to a restaurant and be sure you won't be shot over your soup," she says.

National security is her main concern, and she thinks Trump is the best candidate to protect the country. But Ohio is a place where security moms meet Midwestern manners, and Trump's tactics and tone ruffle a lot of feathers.

"I don't know how he's going to mend fences with women in general," says state Rep. Barbara Sears, who described Trump's attitude as "condescending and simplistic."

Sears is a delegate for Ohio Gov. John Kasich at the Republican National Convention this summer. She was a loyal Kasich supporter, and campaigned for him across five different states when he was running for president. 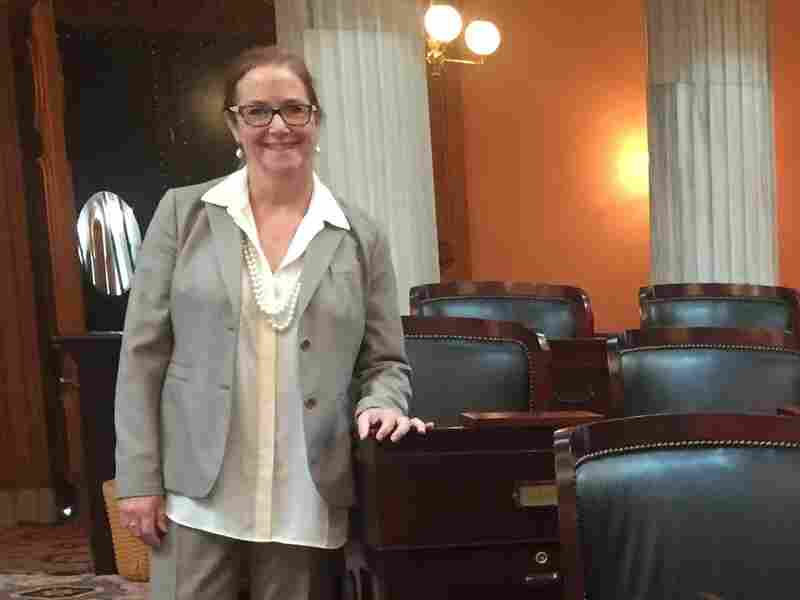 Barbara Sears, a Republican state representative in Ohio, is not sure whether she likes Trump personally, but she plans to vote for him. Asma Khalid/NPR hide caption 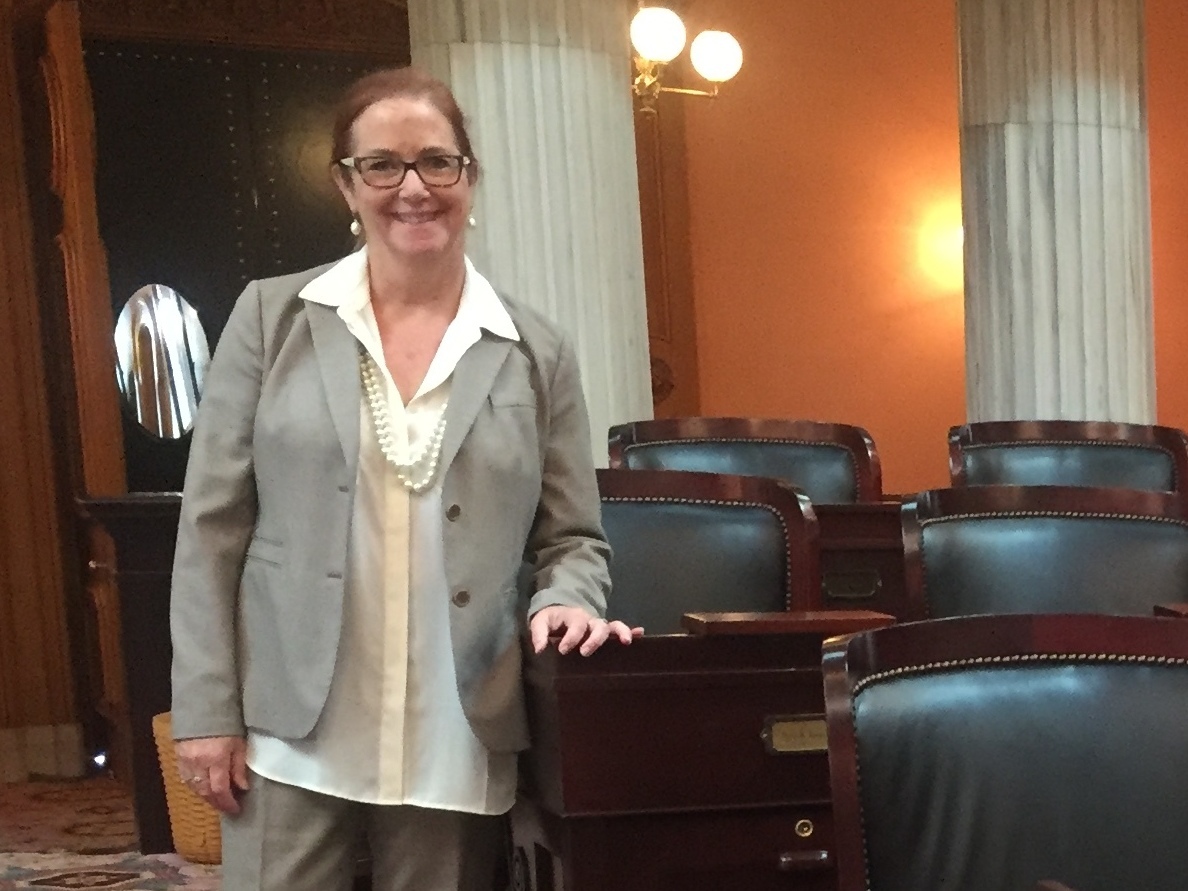 Barbara Sears, a Republican state representative in Ohio, is not sure whether she likes Trump personally, but she plans to vote for him.

But now that Kasich is out of the running, she plans to support Trump — it's a matter of pragmatism and party loyalty, she says.

"Philosophically I'm a Republican, lean more toward the conservative side, and so the idea of moving away from some semblance of a conservative side would just not be acceptable to me," she explains. "So, yes, I'll support Donald Trump ... and rally behind that, because that's the philosophy I want guiding the ship down in D.C."

"I'm still trying to decide whether I like him or not, but I don't know whether I have to like the president. I have to respect the president's ability to lead the country, right? I don't have to be overly excited about the idea of having a cup of coffee with him," she says.

At a park in a wealthy suburb just outside Columbus, moms in sun hats watch their kids in bathing suits splash through water fountains. It's the kind of park where you see Muslim, Latino and black families — and Kasich-style Republicans, like Rachel Pugar, 29.

"We're not thrilled with Donald Trump," she says with a laugh, nodding to her husband, who stands nearby in a pair of scrubs watching their daughter.

Pugar says they supported Kasich in the primaries and worry that Trump doesn't understand foreign policy.

"I think he's a little bit dangerous," she says. "I don't like the way he talks about women and minorities. ... He just doesn't seem like a very stable candidate."

But come Election Day, she says, she will probably still vote for him "because we dislike Hillary even more."

NPR spoke to about two-dozen Republican women from Columbus to Cleveland for this story, and many of them said they would vote for Trump even if they don't like his tone or his character.

But a few women were adamant that Trump is a choice they cannot accept. So, they say, they simply will not vote for president this November; they insist they'll vote for down-ballot elections, but they'll leave the top of the ticket blank.

"He's just so liberal to me, so liberal," says Sandy Nowak, who voted for Ted Cruz in the primary. 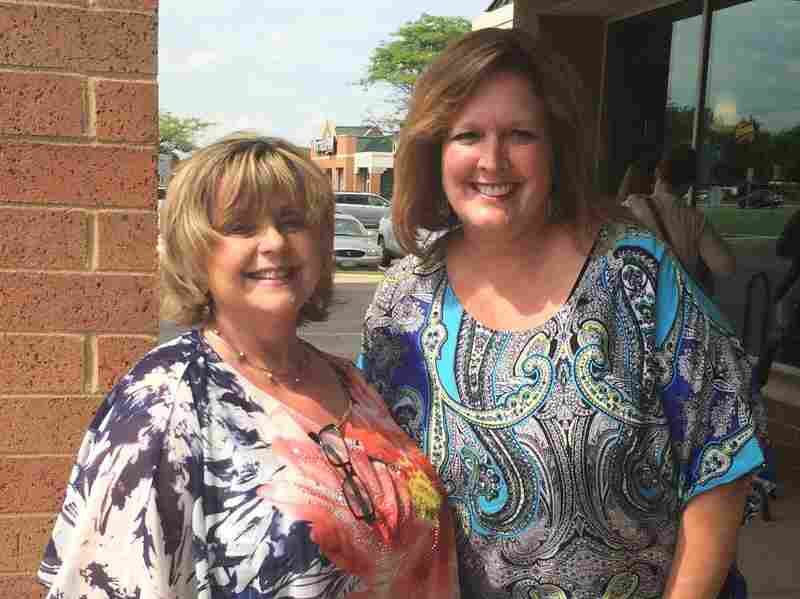 Tamara Frazier (left) and Sandy Nowak are best friends. Both women supported Ted Cruz in the Republican primary and have reservations about Trump as the presumptive GOP nominee. Asma Khalid/NPR hide caption 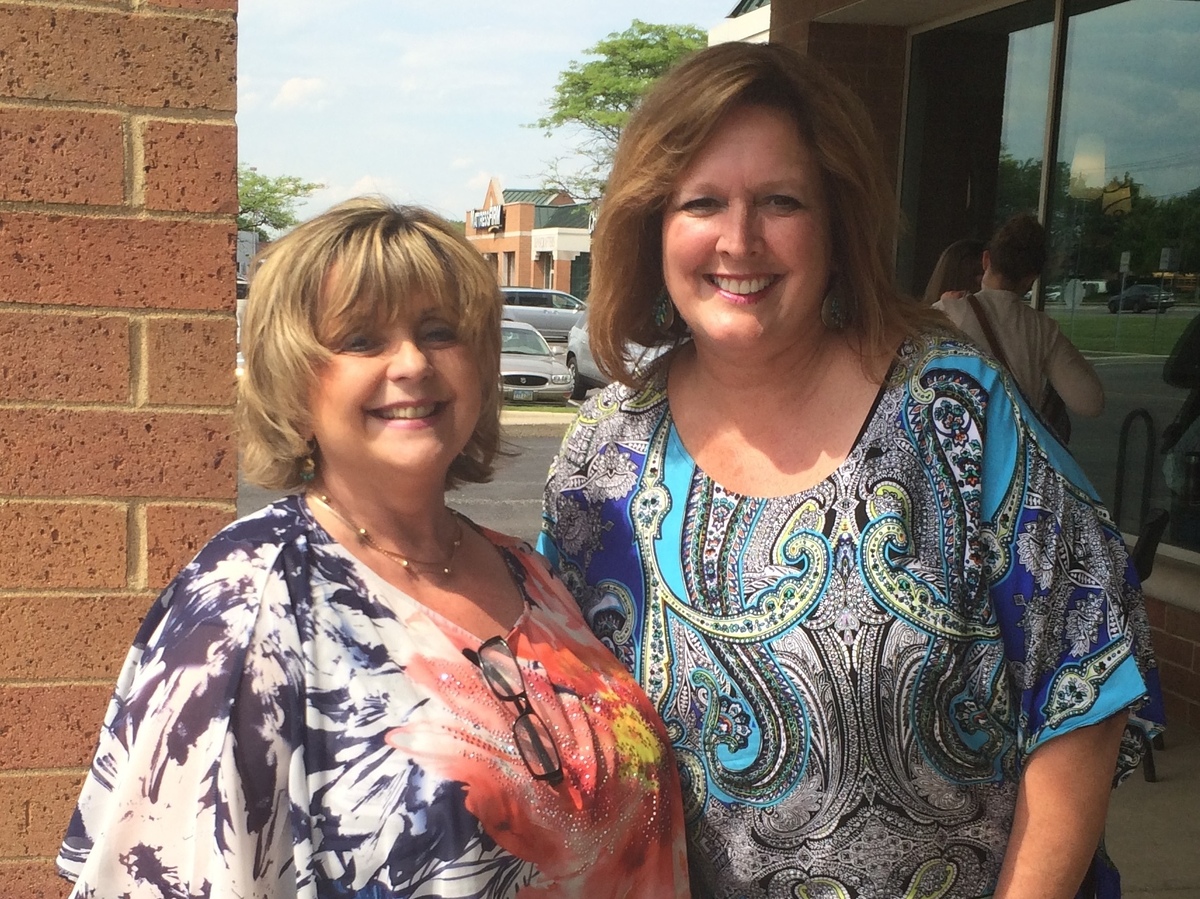 Tamara Frazier (left) and Sandy Nowak are best friends. Both women supported Ted Cruz in the Republican primary and have reservations about Trump as the presumptive GOP nominee.

Nowak worries that Trump is not a true conservative.

"I just feel like I can't, in good faith, go vote for him and then sit back with a good conscience," she says. "I don't necessarily trust him as a person. ... I feel like if we get him, we're saying goodbye to the Republican Party as we've known it.

"I'm willing to sit back and listen and see what he does over the next few months," she says. "I'm still expecting him to be Donald Trump. I'm sure he's going to say things that just make me go, 'Oh!' "

Frazier says some days she's optimistic that Trump is heading in the right direction.

"A lot of times he's on late-night talk shows, and he's being very calm and reasonable, and I'm sitting there going, 'OK, it's possible he could have good manners,' " she says.

But then, she says, she's reminded of the insults he's hurled at women, mainly because of an ad she's seen on TV that she can't get out of her mind; it's an anti-Trump ad made by a superPAC supporting Hillary Clinton, in which women wearing Trump T-shirts mouth Trump's own words regarding women.

"They're hitting everything from short women to Megyn Kelly. ... I'm not kidding, every time ... that crazy commercial comes on, it puts me in the worst mood toward him," she says.

The problem for Trump is that Democrats already have a built-in advantage with women. So, he can't afford to have a Republican woman like Frazier sitting on the sidelines.