Accessibility links
'Finding Dory' But Losing The Thread The sequel to Pixar's beloved 2003 fish tale retains that movie's charms, but taking its main character out of the ocean makes for a thinner and less textured story. 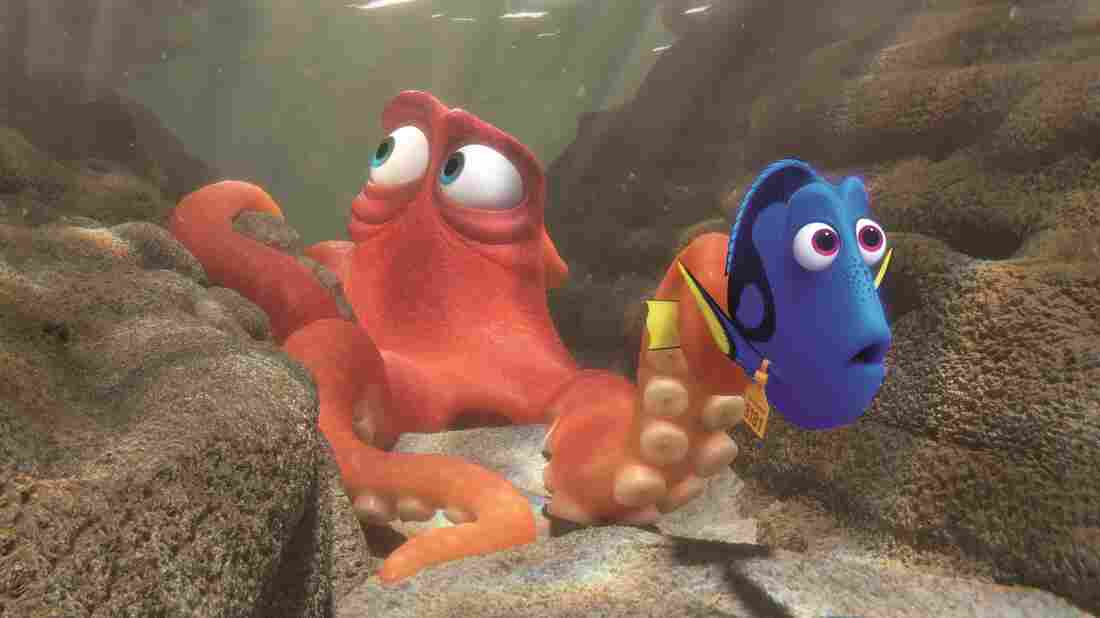 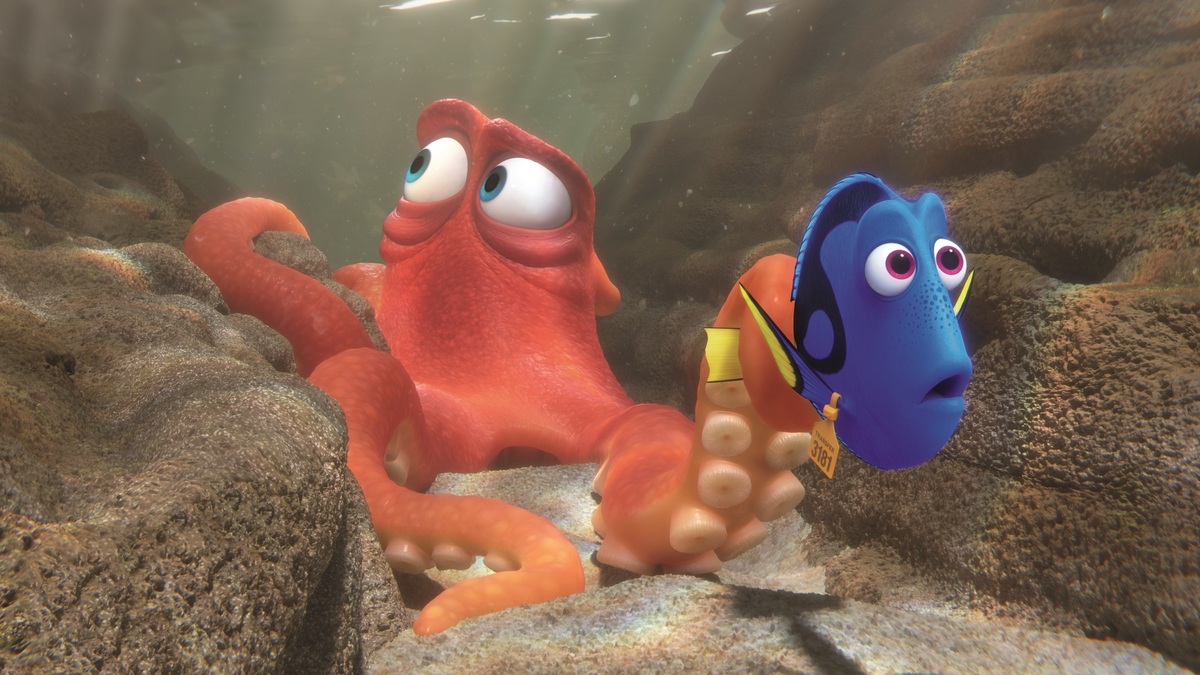 The first line of Finding Dory is "Hi, I'm Dory," but it might as well be, "Awww!" That's the sound your theater will make when it gets its first glimpse of the baby blue tang fish, her big anime eyes half the size of her body, before she ages into the forgetful and freckled bundle of joy whom Ellen DeGeneres voices as though she's giving a giant bear hug to the world.

Dory is well known to the Pixar faithful as the sidekick from 2003's Finding Nemo—the one who swam away with the film, despite competition from surfer-dude turtles, monosyllabic seagulls, and an Ocean's crew in a fish tank. Finding Nemo has the best cast of characters of any Pixar movie, each new face living its own adventure on the margins of the story. It's this quality that supplies that film with so many renewable joys and such oceanic depths.

So a lot is riding on Finding Dory. Pixar is trying to prove that it can make more sequels to non-toy-related franchises without inking the pool (ask your local octopus). Disney would very much like to leverage the popularity of a character who currently boasts 25 million Facebook likes, healthy numbers for any fish. And Hollywood is trying to rehabilitate and release its ailing sequel species, after the box office gangrene that's afflicted nearly all the other brand extensions this year. But by narrowing the focus to one character in one limited setting, Dory has, shall we say, forgotten a crucial element of the first film's magic.

This is despite the fact that the script successfully pulls off something tricky. The challenge of a Dory story is that there are limits to building a narrative around short-term memory loss. It's hard for a forgetful fish to learn lessons, and you have to keep repeating the same story beats. So returning writer-director Andrew Stanton and cowriters Victoria Strouse and Bob Peterson make Dory's condition a form of high-functioning autism.

In the first act, father-son clownfish Marlin and Nemo (Albert Brooks and Hayden Rolence) have readjusted to life in the coral reef, their daily routines with Dory consisting of boundless patience for her behavior. She tries to help out at Nemo's school but only creates more headaches for the teacher, and she accidentally harms Nemo because she isn't fully aware of her effect on others. We see in flashbacks that Dory's parents (Eugene Levy and Diane Keaton) needed to lavish extra care on the wee one to make sure no harm befell her.

Contrast this to Nemo, where Dory's faulty memory was largely played (and likely conceived) for laughs. Now, Stanton's not going full Gilbert Grape on his hero, but, like Frozen's Elsa, Dory's dilemma seems to be a stand-in for something that's never fully verbalized. And her condition is what governs the action, when she recalls a new memory of her long-lost parents that leads her to the Monterey Bay Aquarium Research Institute. (It was going to be a Sea World-esque theme park, before Blackfish came along and made the filmmakers think better of it.)

The institute, which is home to most of the action, lacks the grandiosity of the open ocean and brings déjà vu of the day care from Toy Story 3. (Dory, we'll explain what déjà vu is later.) Perhaps for this reason, its inhabitants prove less compelling than the original Nemo crew—their goals are perfectly convenient to the plot, instead of tangential to it. Yet it's hard not to be charmed by a sneaky seven-legged octopus (Ed O'Neill); a nearsighted whale shark named Destiny (Kaitlin Olson); a beluga just learning his echolocation (Ty Burrell); and two lazy sea lions, voiced by The Wire castoffs Idris Elba and Dominic West. Each is animated with signature Pixar delight, their unique rhythms timed for maximum laughs.

The B-story, involving Marlin and Nemo, is a straight rehash of the cautious papa's character arc from the first film. But throughout both threads, Pixar maintains its signature cinematic technique. Two scenes in particular stand out: an extended shot where we follow Dory from behind as she becomes caught up in a fish tank's ebb and churn, and a climactic first-person sequence that proves the studio is never afraid to bring its heroes to absurdly low points. And then there's the truck, which lets us reflect on how many Pixar movies have small creatures hijacking human vehicles for some friendly chaos. (The 3D is unnecessary, as usual.)

Finally, apart from everything else, sing praise for the lost element Dory was indeed able to find. One of Nemo's better qualities was the movie's lack of a true villain. The sequel repeats this philosophy, aside from one scary squid creature that does unabashedly want to eat Nemo (the sequence sticks out like a sore tentacle). It is nice, especially at this precise moment, to believe that evil and cruelty don't necessarily have to exist in the world: that even in the great big ocean, a couple of small fish looking for help can always depend on the kindness of strangers. That's the sort of world worth remembering.

A note on the preshow: The short this go-around is the adorable Piper, a silent number by the sea (appropriate setting) featuring a young sandpiper who has to face down her fears to overcome the low tide and get some grub. But really, apart from the realistic water effects, this is just a shameless—oh look, Piper is motoring through the sand on her little birdy legs! Awww!!!