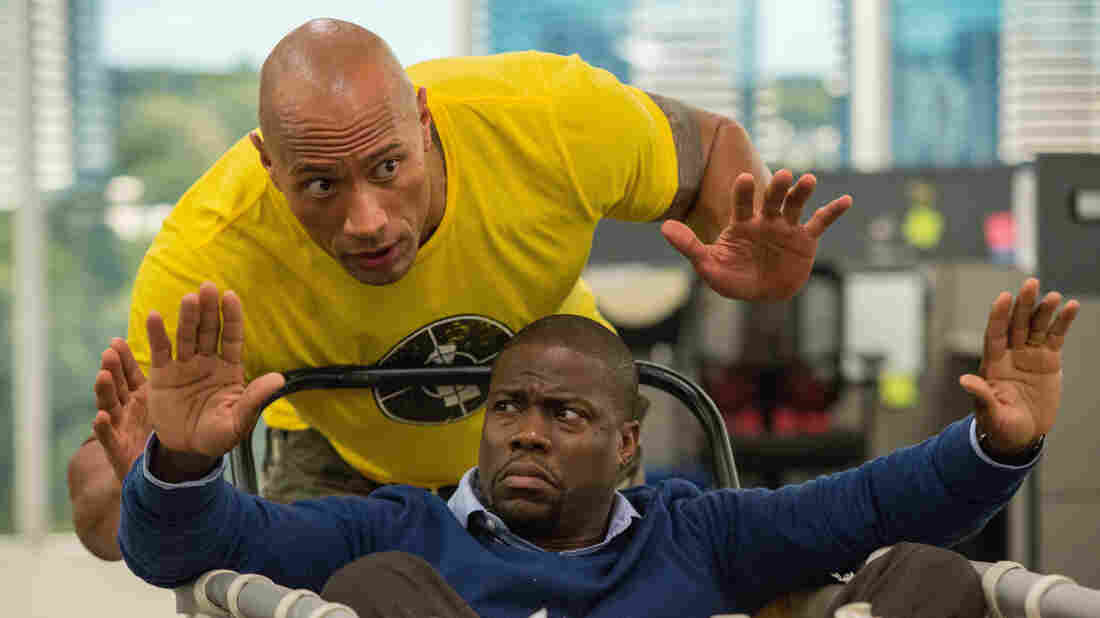 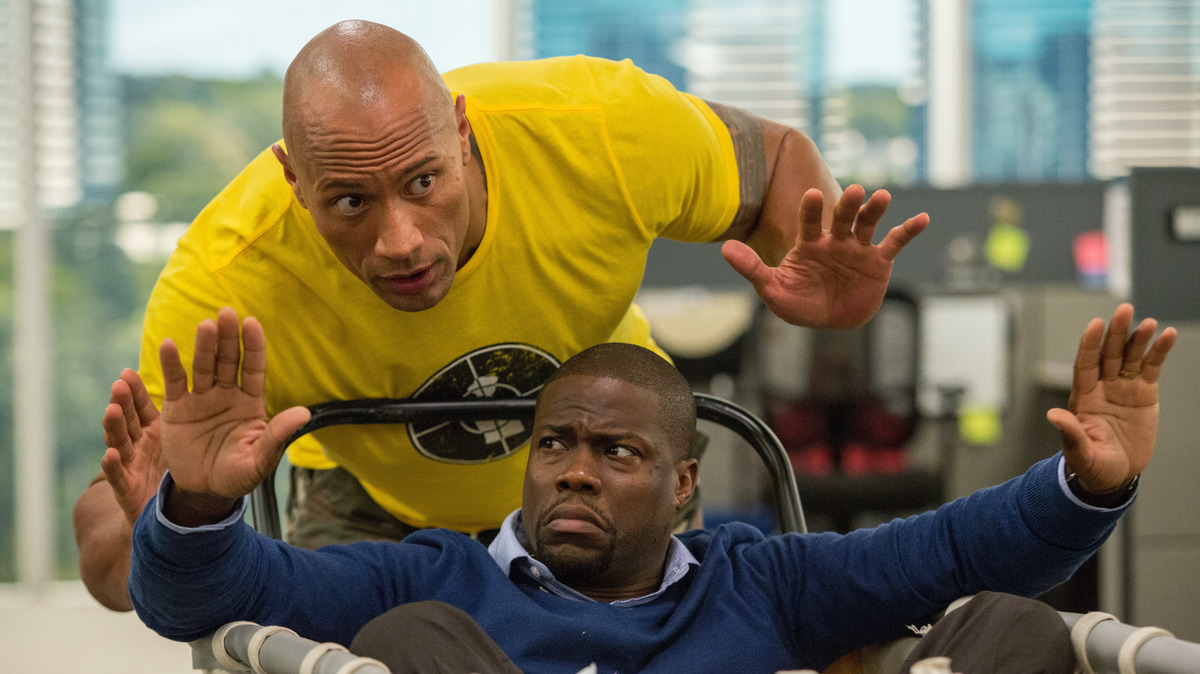 In the marvelous action comedy Grosse Pointe Blank, a 30-year-old John Cusack played a depressed assassin whose personal and professional lives intersect at his 10-year high school reunion. That movie hit theaters in 1997, one year after the principal characters in the new, not-marvelous-but-still-plenty-likeable action comedy Central Intelligence graduated from high school.

The film splits Cusack's Grosse Pointe character into a decidedly asymmetric duo embodied by Dwayne "The Rock" Johnson, 44, and Kevin "The Pebble" Hart, 36. On the eve of his 20-year reunion, Hart's Calvin Joyner is in a funk. He's happily married to his high school sweetheart and gainfully employed as an accountant, but this is not the grand destiny he imagined when he was Senior Class President. (His nickname was The Golden Jet, for reasons that remain tantalizingly unclear.)

Meanwhile, Johnson's character — who's adopted the nothing-to-see-here-folks nom de guerre Bob Stone — has transformed himself into a surprisingly genial superspy, revenging the many cruelties visited upon him as a chubby, En Vogue-loving high schooler. (A set-in-1996 prologue convincingly face-maps Johnson's mug onto the Rubenesque body of dancer Sione Kelepi. Thank you for perfecting this technology, Hollywood.) As if that were not burden enough, he was saddled with the name Robbie Weirdicht. When the bullies attacked during a class assembly, only Calvin showed him kindness. Calvin promplty forgot that impulsive act of charity; The Whup-Ass Artist Formerly Known as Robbie Weirdicht never did.

If you guessed that Bob is going to clear up Calvin's midlife crisis by drawing him into a web of intrigue spanning from Maryland to, er, Massachusetts, you wouldn't get promoted to Double-Oh status for that. But what Central Intelligence lacks in depth or inventiveness, it makes up for in personality, steaming along on the robust comic rapport between Johnson and Hart. They make for first-rate company in a second-rate move about The Company.

You can feel the movie rolling its eyes whenever it must service its ersatz espionage plot, which involves Bob's attempt to draw out a possibly-imaginary terrorist while evading C.I.A. superiors — led by the delightfully straightlaced Amy Ryan — who believe he has, in the venerable tradition of every spy ever to rate a sequel, Gone Rogue. To complete his mission, Bob has need of Calvin's Very Particular Set of Skills: Quicken. Tax-Deferred Annuities. Um. Sarbanes-Oxley? Other accounting words to that effect. Moving on.

Rawson Marshall Thurber is not, despite the name, an 11-term senior U.S. Senator from Alabama, but rather the co-writer and director of Central Intelligence. He's no Billy Wilder, but he does manage to highlight the physical disparity between the two stars to good effect. This sight gag never gets old, nor does the sight of the powder-blue unicorn T-shirt stretched across Johnson's tectonic pecs. ("I'm super into 'corns," he explains.) The absence of vanity in Johnson's buffoonery is appealing. Hart has the tougher job by far, and he's a generous scene partner. To its credit, the movie doesn't use Hart's panicky straight-man schtick to make Johnson look cool.

It uses it to make him look really, really weird.

Which brings me to this observation: Though it delights in referencing Sixteen Candles, and it may appear to untrained eyes to be a buddy movie, Central Intelligence in fact belongs to a more highly specialized sub-genre that we might call the Manic Pixie Dream Killer flick. This canon includes the James Cameron-Arnold Schwarzenegger joint True Lies (itself a remake of the French farce La Totale!), the underseen Shane Black-penned The Long Kiss Goodnight, and the hardly-seen-at-all The Matador, which featured an actual ex-James Bond — Pierce Brosnan — as a weary hitman who helps decent, boring Greg Kinnear realize that his tranquil life is actually a blessing.

Central Intelligence is a more relaxed affair than any of those films: Less violent, less interested in its characters' inner lives, less fatalistic, shaggier. The action half of this action-comedy is perfunctory; Thurber has no gift for it. Again and again, supposedly highly-trained operators fire dozens of rounds at one another from 10 feet away and miss. Spy and The Nice Guys and Grosse Pointe Blank all had witty, beautifully staged action, so it's not as though funny movies can't.

The comedy half, happily, is in perfect working order. Its roster of beloved comedians who put in cameo appearances shall remain classified. I just hope you can remember the title of this movie when you're looking for it on Netflix four months from now.

For most of this review, I thought it was called National Security.