Accessibility links
Fanboys Attempt to Recapture Youthful Home-Movie Magic in 'Raiders!' As boys, Chris and Eric made an ingenious shot-for-shot remake of Raiders of the Lost Ark that earned cult status. A new documentary reunites them to film the one shot they never managed to get. 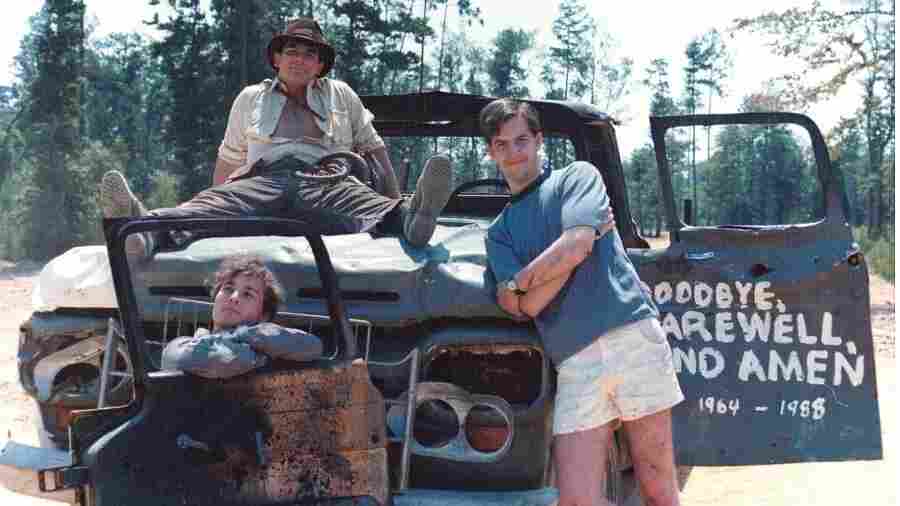 Chris Strompolos, Eric Zala and Jayson Lamb pose with their broken-down prop truck they used in their shot-for-shot remake of Raiders of the Lost Ark. Drafthouse Films hide caption 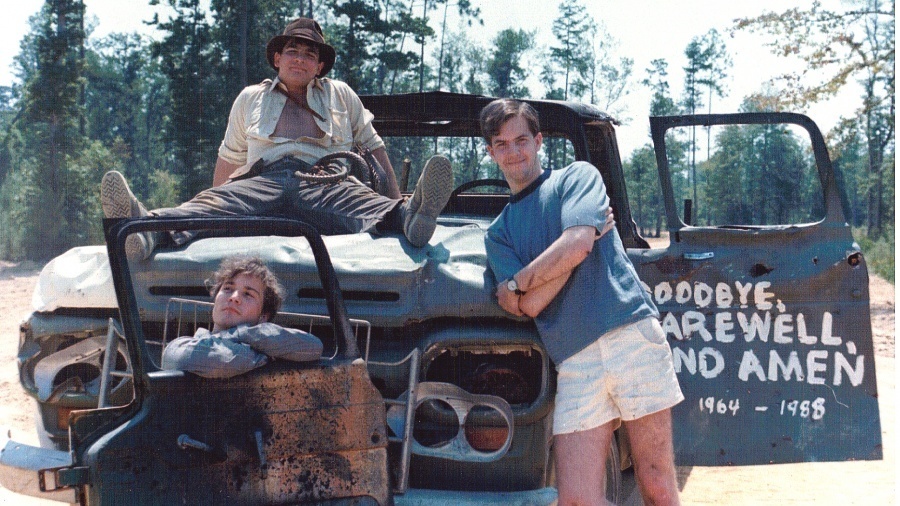 Chris Strompolos, Eric Zala and Jayson Lamb pose with their broken-down prop truck they used in their shot-for-shot remake of Raiders of the Lost Ark.

In recent years, the word "fan" has become a pejorative in the movie world, linked to mobs of entitled young men torching critics of comic-book blockbusters, advancing sinister conspiracy theories, and preemptively decrying the all-female Ghostbusters movie. To watch the documentary Raiders! The Story of the Greatest Fan Film Ever Made is to be reminded that fandom can be about sincere passion, friendship, creative excitement, and a relationship to art that's intensely personal. That the story begins in the Deep South, long before the Internet existed, probably helps.

Beginning in 1982 a couple of boys from Mississippi, 11-year-old Chris Strompolos and 12-year-old Eric Zala, spent eight consecutive summers filming a shot-by-shot remake of Steven Spielberg's Raiders of the Lost Ark. This may sound like a whimsical endeavor, akin to Rushmore's Max Fischer Players adapting grown-up movies like Serpico for the stage, but that would undersell the level of commitment they brought to the project. Unlike the Gus Van Sant remake of Alfred Hitchcock's Psycho, which cheated constantly on its "shot-by-shot" promise, Strompolos and Zala were methodical about seeing the experiment through. With no budget and jury-rigged effects, they turned a $20 million action-adventure blockbuster into a Betamax wonder that grew from obscurity to the stuff of cult legend.

Raiders! catches up with Strompolos and Zala as middle-aged men who drifted apart as young adults and long-since shelved their dreams of becoming filmmakers. As kids, their Raiders remake was an obsession borne partly of unsupervised playtime and partly as an escape from two broken homes, which made Indiana Jones both an impossibly cool hero and an ideal of manhood their fathers couldn't muster. Summer after summer, Strompolos and Zala, along with their eccentric cinematographer, Jayson Lamb, would gather makeshift props and costumes and puzzle their way through sequences that had set a new standard for stuntwork and special effects.

Directors Tim Skousen and Jeremy Coon structure the documentary around Strompolos and Zala's efforts to shoot the only scene they couldn't pull off as children: the one where Indiana Jones squares off against a beefy adversary on an airport tarmac. Raiders! nicely interweaves the bittersweet history of the remake with a behind-the-scenes look at the middle-aged Strompolos and Zala collaborating for the first time in decades. Finishing the movie might seem like a contrived attempt at "closure" for the documentary's benefit, but as it turns into an unexpected quagmire, the complexity of this project and this friendship starts to come to light. Along with the unfettered joy of living out Spielberg's fantasy came moments of danger and personal turmoil, and the intervening years led to bitter estrangement, as Zala forfeited his ambitions in exchange for fatherhood and a corporate job, while Strompolos succumbed to cocaine and meth addiction.

When geek royalty like Eli Roth and Harry Knowles helped bring the Raiders remake into the light at Knowles' annual Butt-Numb-A-Thon film festival in 2002, Strompolos and Zala's redemption arc was finally written. The one major problem with Raiders! is that said redemption arc feels predigested, with too many scenes that pop-psychologize their past and present, and a conclusion that's satisfying but conspicuously tidy. Then again, after finishing a project three decades in the making, these fanboys have perhaps earned the right to engineer their own happy ending.