Accessibility links
Investigation Of American Red Cross Finances Finds 'Fundamental Concerns' A congressional inquiry finds that the American Red Cross stonewalled lawmakers as they sought to understand the charity's finances, and that it sent significantly less money to Haiti than claimed. 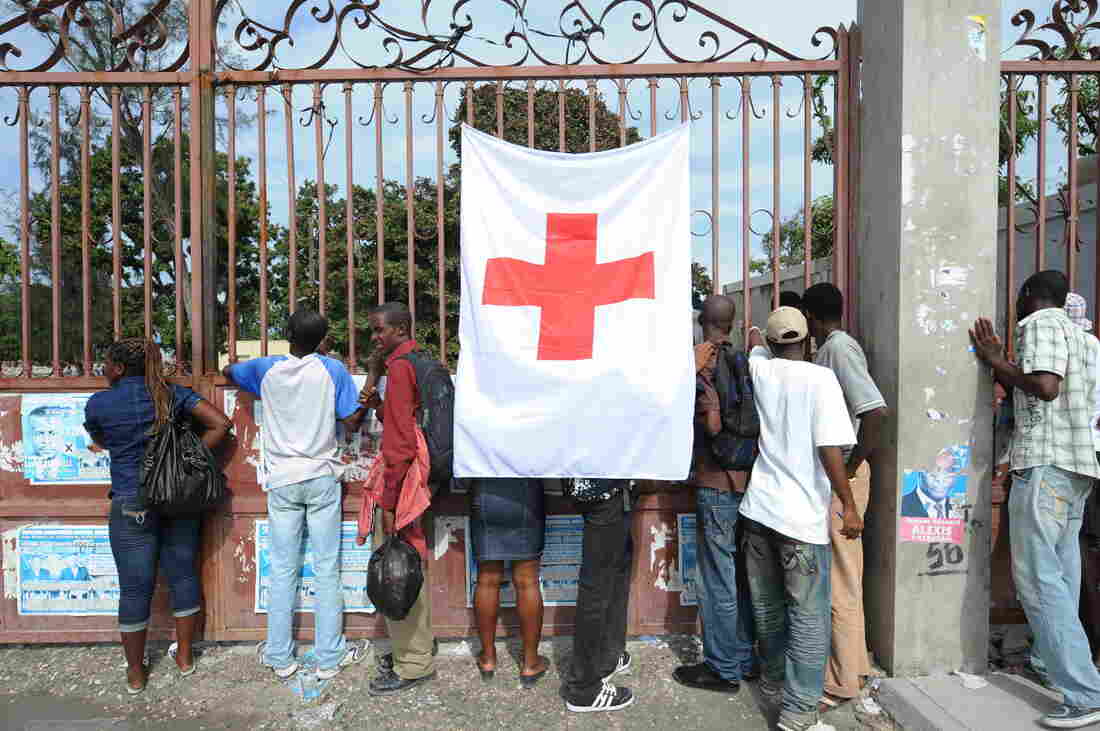 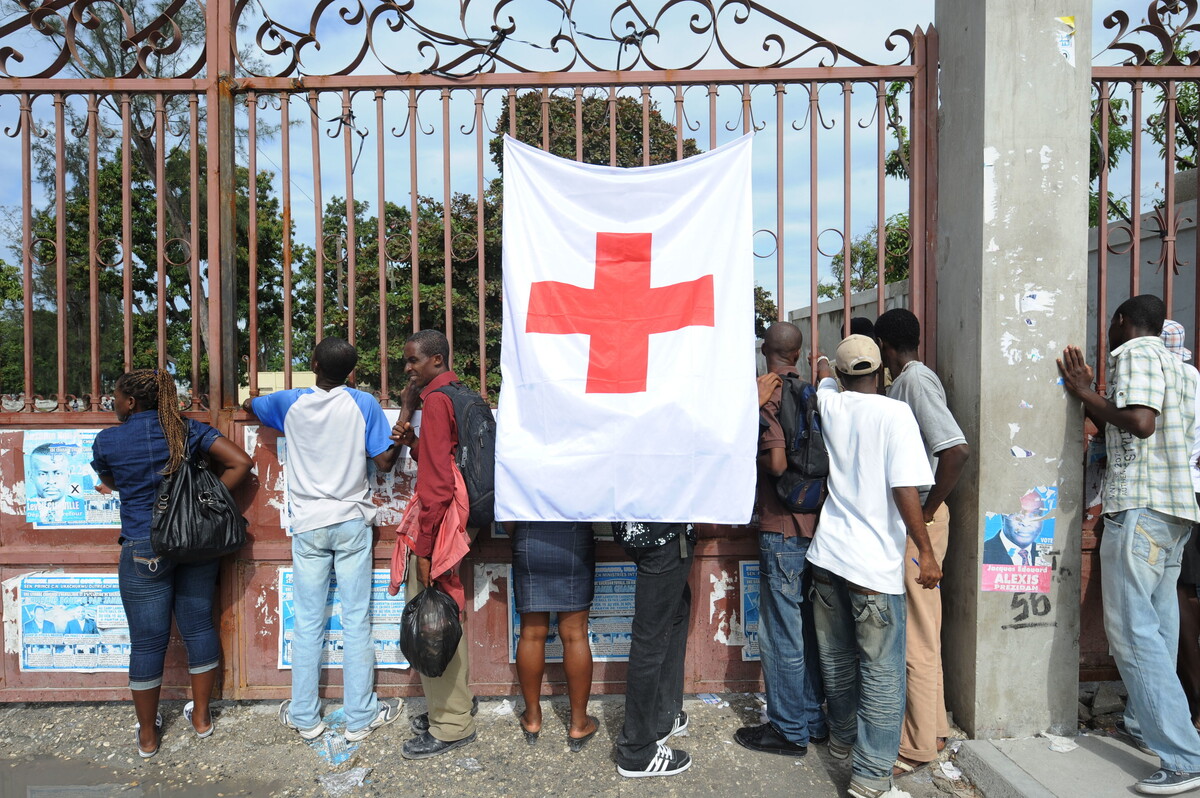 Haitians outside a Red Cross field hospital in Carrefour, Haiti, on Dec. 14, 2010, 11 months after a magnitude 7.0 earthquake hit the country's capital, Port-au-Prince.

The American Red Cross spent a quarter of the money people donated after the 2010 Haiti earthquake — or almost $125 million — on its own internal expenses, far more than the charity previously had disclosed, according to a report released Thursday by Iowa Sen. Chuck Grassley.

This story was reported in partnership between NPR News Investigations and ProPublica, an investigative journalism organization.

The report also says the charity's top officials stonewalled congressional investigators and released incomplete information about its Haiti program to the public. It concludes "there are substantial and fundamental concerns about [the Red Cross] as an organization."

The report follows a nearly yearlong investigation by the Iowa Republican and his staff, launched after coverage by NPR and ProPublica of the Red Cross' Haiti response. The venerated charity raised nearly $500 million after the disaster, more than any other nonprofit, but an ambitious plan to build housing resulted in just six permanent homes, NPR and ProPublica found.

Other findings in Sen. Grassley's report:

Red Cross officials defended the charity's work in a statement responding to the Grassley report, calling the organization's spending "entirely justifiable given the size and complexity of the Haiti program." They also noted that the Red Cross receives favorable ratings for accountability from charity watchdog groups. 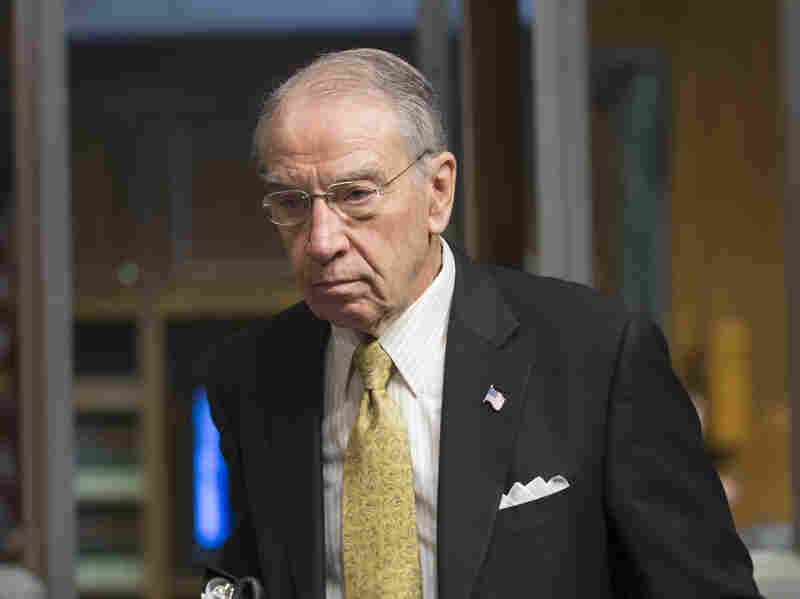 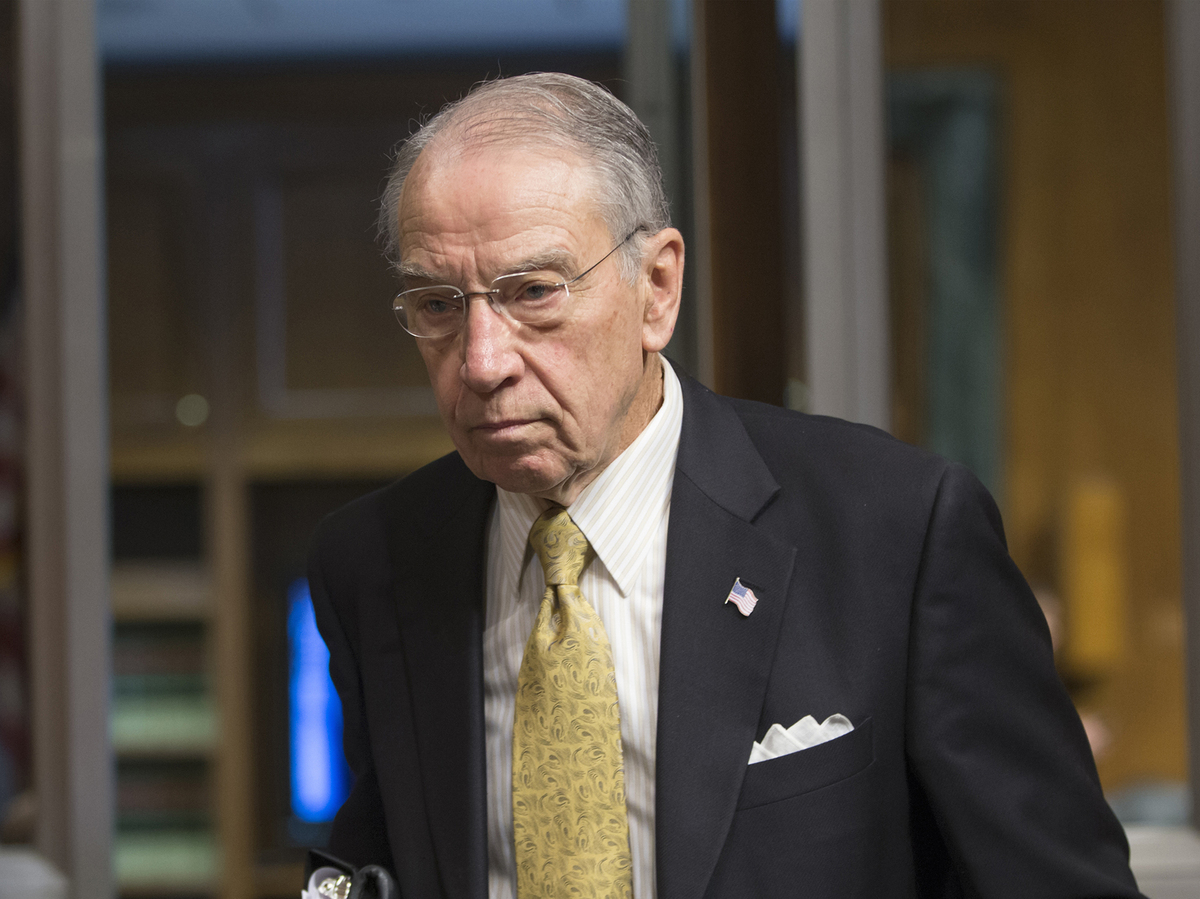 Grassley, who chairs the Senate Judiciary Committee, said in an interview that even after a year of back-and-forth with the Red Cross, "we did not get satisfactory answers — like pulling teeth, it was very difficult."

The Red Cross, including McGovern, repeatedly has told the public that all but 9 percent of donations spent go to humanitarian programs. But Grassley's office found that 25 percent of donations sent to Haiti — or nearly $125 million — were spent on fundraising and management, a contingency fund and the catchall category the Red Cross calls "program expenses."

"The most important thing [from the report] is an unwillingness to level with the people exactly where the money went," Grassley says. "There's too many questions in regard to how the money was spent in Haiti ... it gives me cause to wonder about other money being donated for other national disasters."

"One of the reasons that they don't want to answer questions is it's very embarrassing," Grassley adds.

In its statement, the American Red Cross notes that it has not yet seen Grassley's report, but that the organization and McGovern have been transparent, and that donors' money was properly spent. The statement also notes "the scale of the destruction and the challenging and sometimes dangerous conditions of working in Haiti."

The Red Cross, created by a congressional charter more than a century ago, receives a range of special benefits from the U.S. government.

Here are more details from the report:

The Red Cross Didn't Explain How Money Was Spent

In general, the Red Cross itself doesn't know how much money it spent on each project in Haiti because of a "complex, yet inaccurate" accounting system, the report found.

The report echoes the confidential findings of consultants hired by the Red Cross, which previously were reported by NPR and ProPublica. One internal evaluation of one of the group's water and sanitation projects found there was "no correct process for monitoring project spending." Another assessment found that the group's figures on how many people were helped by a hygiene project were "fairly meaningless."

Documents provided by the Red Cross suggest that the charity sometimes spent large sums of money on management costs even when it enlisted other organizations to run relief operations.

In Search Of The Red Cross' $500 Million In Haiti Relief

In 2010, the American Red Cross wrote a check for $4.3 million to its sister organization the International Federation of the Red Cross for disaster preparedness work. On top of the $4.3 million, according to budget figures the charity provided to Grassley, the American Red Cross spent another $2 million on its own to manage the grant. That's after it already took out hundreds of thousands of dollars in administrative fees.

Partners like the IFRC typically take out their own overhead and administrative costs before using the money to help Haitians.

When asked what the $2 million was used for, the Red Cross said it covered the costs "incurred to ensure accountability, monitoring and evaluation of work performed and ensure our partners meet their contractual requirements."

"It's sort of a shocking amount of money," said Jake Johnston, a research associate at the Center for Economic and Policy Research, who has spent years digging into the Red Cross' finances. "Maybe a little bit more than half that ends up going to a project."

The report lists eight examples of things the Red Cross declined to provide to government investigators working for the GAO as part of an inquiry that began in 2014. Those include descriptions of the charity's internal oversight processes, as well as interviews with chapter officials involved in the response to Superstorm Sandy.

In its statement, the Red Cross says that "at no point did the Red Cross refuse to provide requested information." But Grassley's report calls that claim "contrary to the documentary evidence."

McGovern has portrayed the Red Cross as a beacon of openness. "We made a commitment that we want to lead the effort in transparency," she said at the National Press Club in 2011. 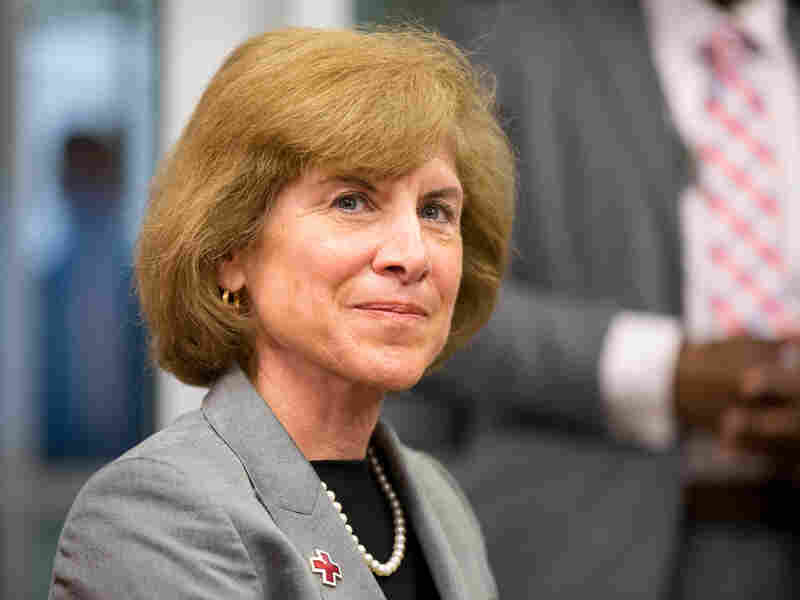 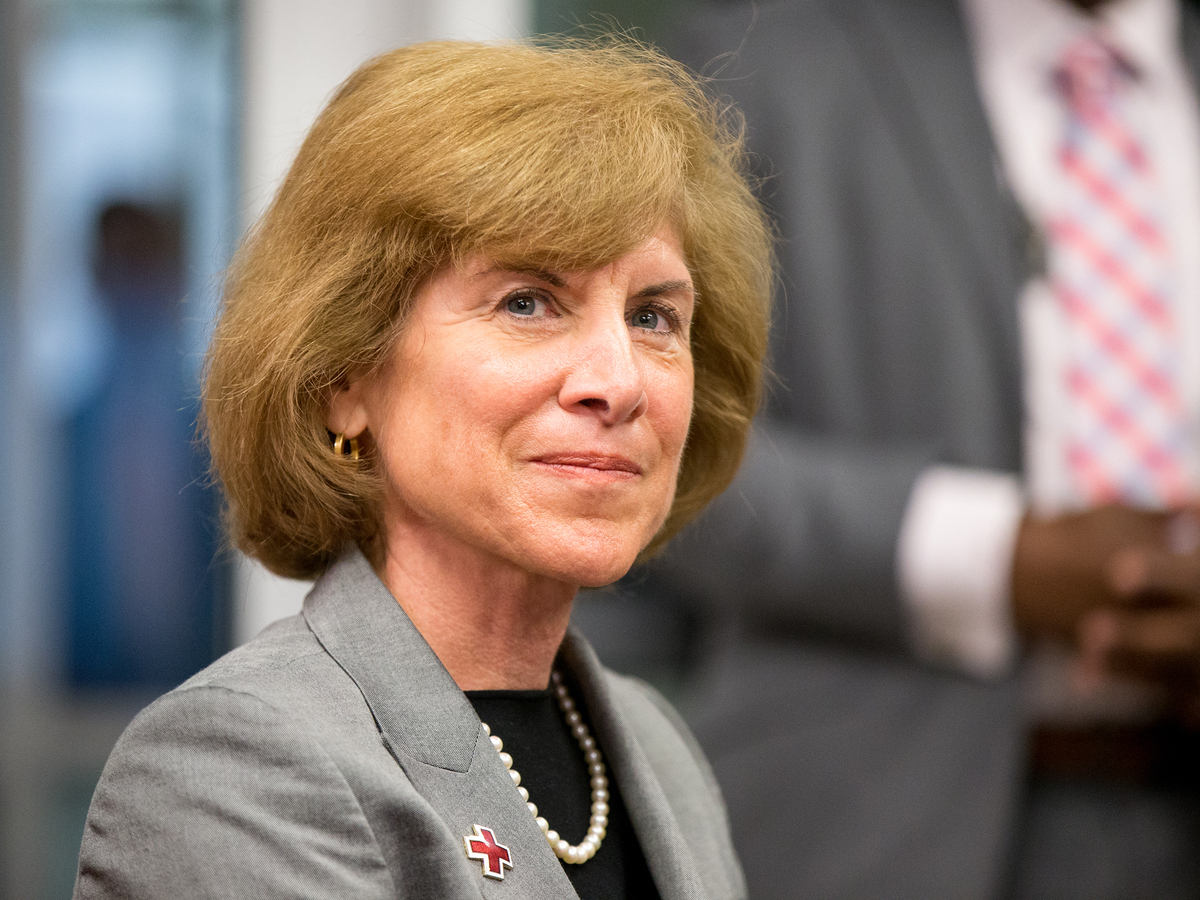 American Red Cross President and CEO Gail McGovern attends a roundtable with President Obama regarding the 10th anniversary of Hurricane Katrina in New Orleans on Aug. 27, 2015.

Grassley also says that, as NPR reported last year, McGovern tried to kill the GAO investigation — and that while the Red Cross couldn't kill the investigation, its "lack of cooperation led GAO to modify its scope."

The Red Cross argued that investigators' "requests for internal decision-making, internal oversight, and internal funding allocation are outside of GAO's authority," according to the GAO's account.

The Red Cross Undercut Its Own Ethics Unit

The Red Cross has about 20,000 employees, but its ethics office — which investigates waste, fraud and abuse — is composed of three people, according to the Grassley report. That is down from roughly 65 staffers after Hurricane Katrina a decade ago, the report says.

The Office of Investigations, Compliance and Ethics was left so "understaffed and underfunded" that it is "unable to perform its primary function; namely, to perform investigations, ensure compliance, and maintain ethical standards," the report found.

The report doesn't explain why the size of the office was slashed, but it does note that the Red Cross sometimes relies on outside law firms to conduct internal investigations.

One of the three remaining employees, the "compliance coordinator," performs only intakes and triages and does not actually do investigations. Another, the chief investigator, is based in New York, away from Red Cross headquarters in Washington.

Requests by the head of the unit, Teala Brewer, for more staff have gone unfulfilled, the report says.