Accessibility links
Southern Baptists Split With Donald Trump On Refugee Resettlement At the annual meeting of Southern Baptist churches, delegates affirmed a Christian duty to welcome refugees and called for an end to the display of the Confederate battle flag. 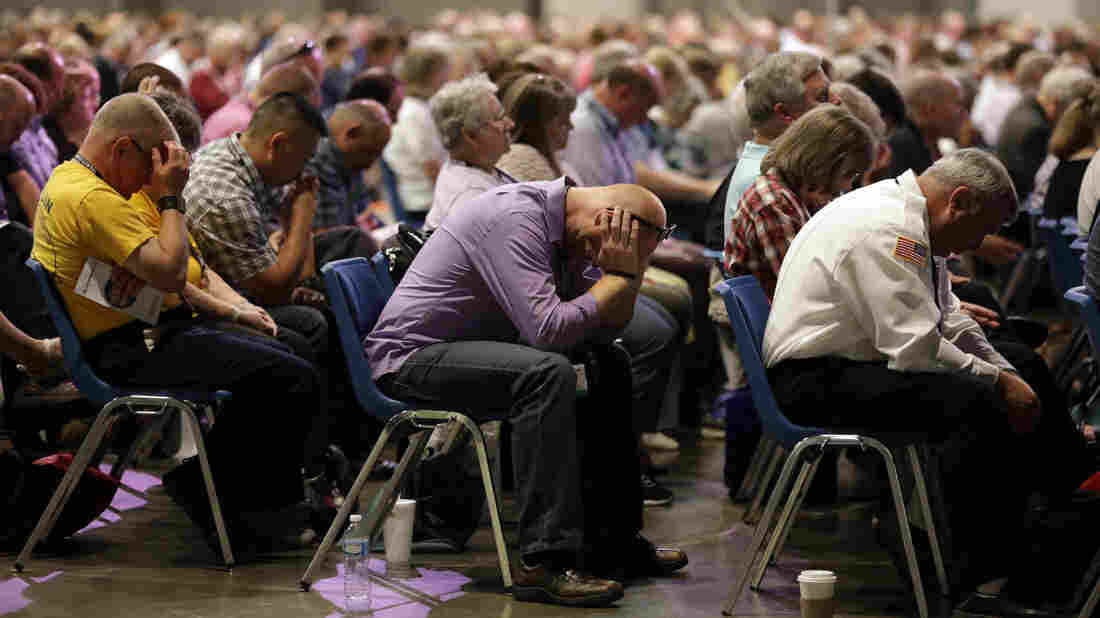 Delegates at prayer during the annual meeting of the Southern Baptist Convention in St. Louis. Jeff Roberson/AP hide caption 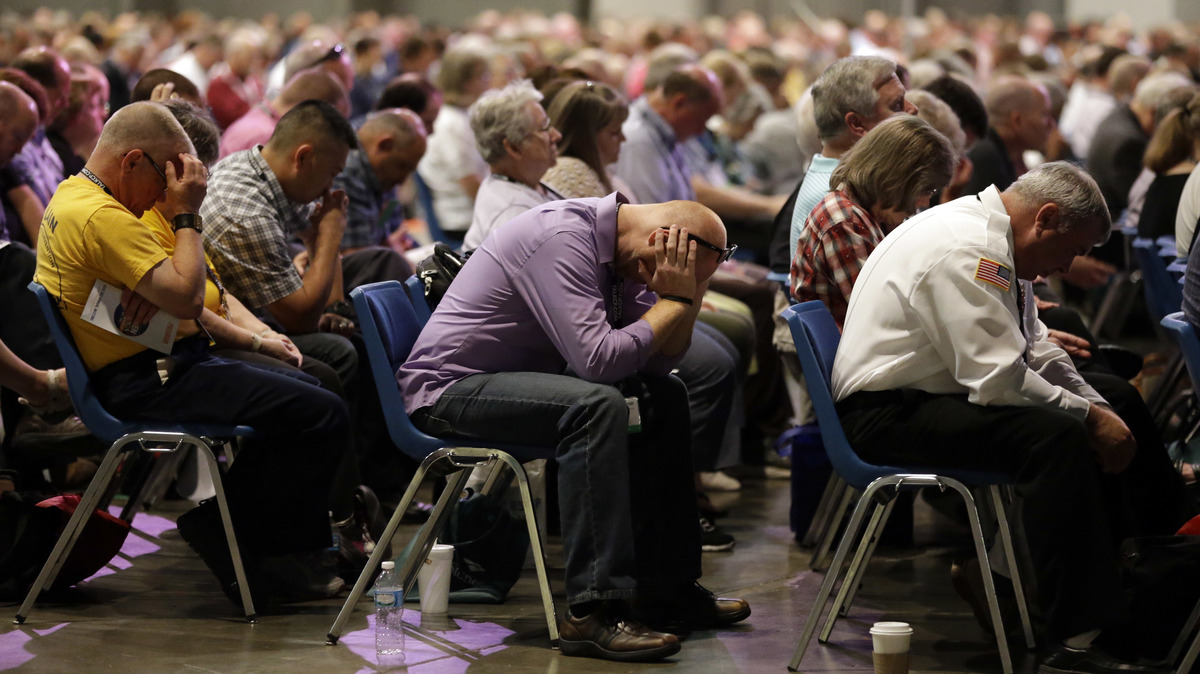 Delegates at prayer during the annual meeting of the Southern Baptist Convention in St. Louis.

Southern Baptists are one of the most reliably Republican religious groups in the U.S. But in a week when the party's presumptive presidential nominee has expanded on his proposal for a temporary ban on Muslims entering the United States, the Southern Baptist Convention is taking a different approach.

During the annual meeting of Southern Baptist churches in St. Louis, participants weighed in on a variety of hot-button issues, among them the controversy over refugee resettlement.

Participants voted to approve a resolution urging Southern Baptist churches and families to welcome refugees, affirming "that refugees are people loved by God, made in His image, and that Christian love should be extended to them as special objects of God's mercy in a world that has displaced them from their homelands."

The resolution also called on the government to "implement the strictest security measures possible" in screening refugees applying to enter the country.

A History Of Welcoming Refugees

It's not the first time conservative Christians have weighed in on the issue. Last November, the National Association of Evangelicals called on believers to welcome Syrian refugees. That came in the aftermath of the Paris attacks as many elected officials — mostly Republicans — called for a halt to immigration of those refugees.

Matthew Soerens of the evangelical refugee resettlement group World Relief praised the move, noting that churchgoers of many religious denominations are eager to aid refugees, and are "strongly opposed to governmental efforts that would block their ability to be a part of this sort of ministry."

Soerens says Donald Trump's proposal to bar immigration from countries with a "proven history of terrorism" would likely keep out Christians and other religious minorities as well.

"Trump's proposal would close the doors of our country to persecuted individuals of all backgrounds from these countries, presumably, and local churches do not want to be a part of turning our backs on the persecuted church," Soerens wrote in an email to NPR.

The question of religious freedom — and how it should apply to Muslims — was also part of the discussion at the convention. At one point, John Wofford, a pastor from Arkansas, stood up to ask why a Southern Baptist should support the right of Muslims living in the United States to build mosques when, as Wofford put it, "these people threaten our very way of existence as Christians and Americans?"

Russell Moore of the Southern Baptist Ethics and Religious Liberty Commission responded unequivocally: "Sometimes we have to deal with questions that are really complicated," Moore said.

"This isn't one of those things."

As the crowd applauded, Moore cautioned Southern Baptists that religious freedom has to be for everyone.

"When you have a government that says we can decide whether or not a house of worship can be constructed based upon the theological beliefs of that house of worship," Moore said, "then there are going to be Southern Baptist churches in San Francisco and New York and throughout this country who are not going to be able to build."

The convention also passed a resolution mourning the victims of this week's mass shooting at an Orlando gay nightclub, and calling on church members to pray, donate blood and offer other forms of support.

Some critics noted, however, that the Orlando resolution made no mention of LGBT rights or the fact that many of the victims appear to have been targeted because of their sexuality. The constitution of the Southern Baptist Convention explicitly states that churches that "affirm, approve, or endorse homosexual behavior" are not "in cooperation" with the organization as a whole, and the organization has repeatedly passed resolutions condemning homosexuality. This year, a new resolution reiterated the belief that marriage is "between one man and one woman."

While the resolution didn't mention gay and lesbian victims, outgoing SBC President Ronnie Floyd said in an address to attendees that an "attack against gay Americans in Orlando is an attack against each one of us," adding that Christians should oppose violence and bigotry against "anyone in this world," according to minutes kept by Baptist Press.

Southern Baptists also weighed in on another emotional issue at the intersection of race, religion and violence. Almost exactly a year after the murder of nine people at Emanuel African Methodist Episcopal Church in Charleston, S.C., set off a debate over the Confederate battle flag, the Southern Baptist Convention approved a resolution calling on "our brothers and sisters in Christ to discontinue the display of the Confederate battle flag as a sign of solidarity with the whole Body of Christ, including our African-American brothers and sisters."

That's notable for a church that has its roots in the history of racial segregation in the Deep South and, in 1995, apologized for its past position on slavery.

During the debate over the wording of the resolution, Pastor James Merritt of Cross Pointe Church in Duluth, Ga., delivered an emotional speech calling for the removal of language stating that for some, the display of the flag serves not as a "symbol of hatred, bigotry and racism, but as a memorial to loved ones who died in the Civil War."

"I am the great-great-grandson of two men who fought in the Confederate army," Merritt told the convention. "I cannot undo what they fought for. But they cannot undo what I wish they had done, and what I pray we will do today."

The language was stricken. Baptist Press reported that the resolution passed by a "wide margin."

A previous version of this story stated that the Southern Baptist Convention apologized for its past position on slavery seven years ago. In fact, it did so in 1995.