Accessibility links
Trump University Uses Similar Sales Tactics To For-Profit Colleges But Without Degrees Trump had to drop "university" from his enterprise's name, but it used similar tactics to institutions in the for-profit college industry, where students incur high cost and debt with low results. 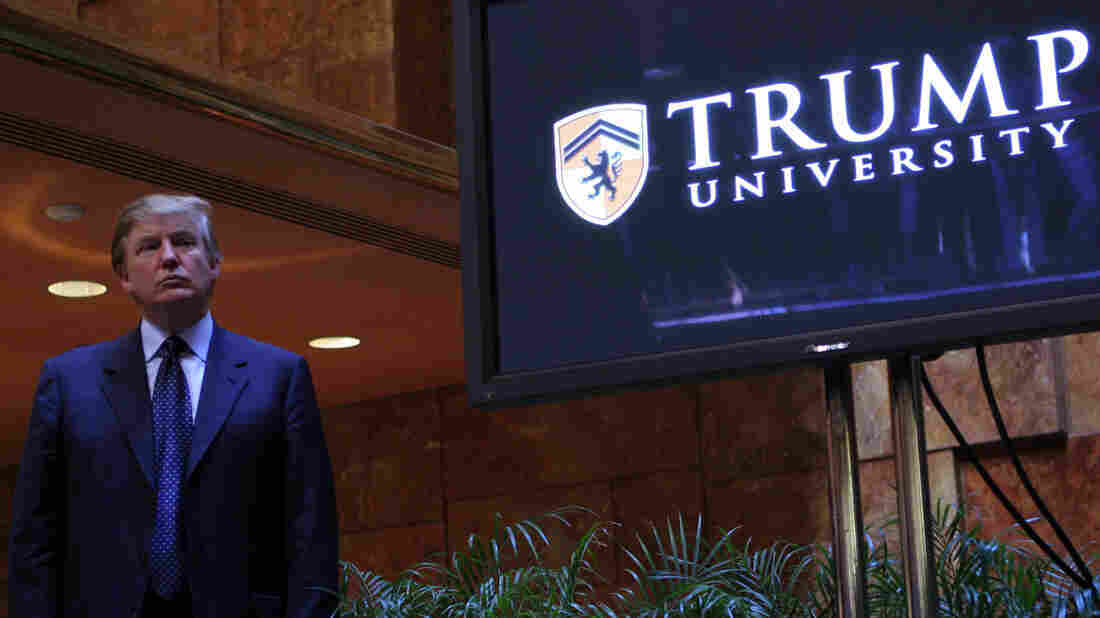 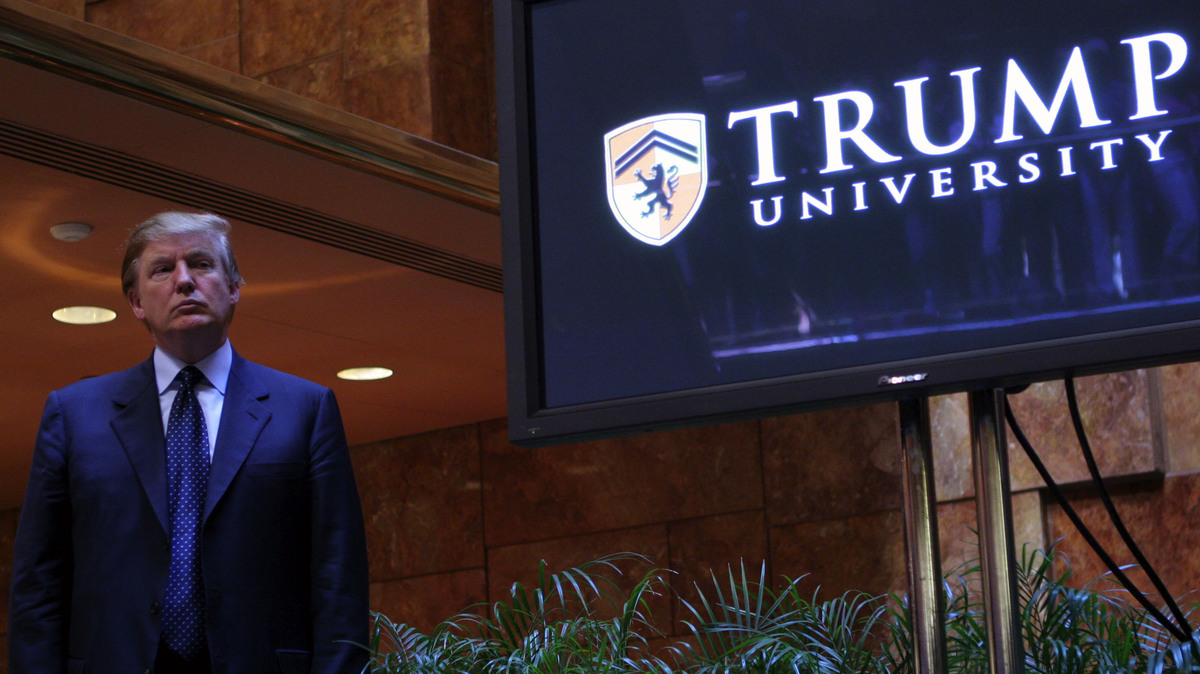 Donald Trump holds a media conference announcing the establishment of Trump University on May 23, 2005, in New York City.

The documents released in the lawsuit against Trump University paint an unflattering picture. And as NPR has reported, the political repercussions could be hugely damaging for the Trump campaign.

Beyond politics, Trump U's moneymaking schemes highlight the lingering survival of a larger issue — cases of fraud in the for-profit college industry. A lot of the Trump U strategies sound like they were pulled straight from the playbooks of those colleges. But is that a fair comparison?

One huge difference between Trump University and the broader for-profit industry is that Trump's "school" was not actually a university at all. In fact, New York's Department of Education requested that the enterprise drop university from its name in order to continue to do business in the state. It didn't offer degrees; it was not accredited; and its students were not eligible for federal financial aid.

"With the exception of the word 'university,' there's nothing it has in common. They're just completely different," said Noah Black, a spokesman for Career Education Colleges and Universities, which represents for-profit colleges.

"It's an attempt by people opposed to having the private sector in education to confuse people into thinking our institutions have anything in common with Trump University," he added

Not everyone agrees with that.

In terms of its tactics, Nassirian said, it's "mostly a matter of degrees" that separate Trump University from degree-granting for-profit colleges.

For-profit colleges differ from other post-secondary institutions in that, unlike their not-for-profit counterparts, these schools are businesses. That means they're looking to make money.

They've been good at it for a while. The for-profit industry saw a boom from 1998 to 2008, when enrollment more than tripled. By 2012, 10 to 13 percent of all college students attended a for-profit school, according to a Senate report that year, which examined the for-profit college industry.

Since then, the industry has been scrutinized. Last summer, the U.S. Department of Education made a "gainful employment" rule, which requires for-profit colleges to prove they prepare students for well-paying jobs before they can be eligible for federal student aid. A few months later, a federal judge told for-profit Corinthian Colleges to pay more than $500 million to the Consumer Financial Protection Bureau for defrauding students.

The industry has taken a hit. At four-year for-profit schools, enrollment is down by nearly 10 percent. But despite the damage, these schools are not going away. More than 1 million students nationwide attended for-profit colleges this spring.

"The business model has not changed," Nassirian said. "In many ways, the Trump case was chump change."

A former Trump University manager testified that the school "preyed upon the elderly and uneducated to separate them from their money."

Sometimes, it was an aggressive separation, with Trump University employees pressuring customers to spend as much as $35,000 for retreats, online training and three days of in-person mentoring in the field.

Those who have come forward against the program sound like normal people trying to catch a break. One woman told the New York Daily News: "I wasted my entire life savings on Trump."

The expensive courses aren't new. The for-profit industry in general is one where high cost — and lots of debt — are common.

This year, the average tuition at for-profit colleges was more than $15,000, compared with around $3,000 at community colleges, $9,000 at in-state public universities, and $30,000 at private nonprofit universities.

Though not the biggest price tag, the high cost of for-profit colleges — and the longer amount of time it takes for students to finish them — means more borrowing. A ProPublica analysis of the 2012 Senate report found that 96 percent of students at for-profit schools borrow money.

Student loans, however, are common in every higher education sector.

"At almost any nonprofit or public institution, there is debt," said Black of the group that represents for-profit colleges. "Our schools don't necessarily encourage students to take on debt."

Encouraged or not, at for-profit schools, many students aren't able to pay that money back. Of the student borrowers nationwide who default on their loans, 70 percent attend either for-profit colleges or, to a lesser extent, community colleges, according to a paper presented by the Brookings Institution last fall.

Trump University students were sold the prospect of wealth and success. To do so, the enterprise emphasized branding, particularly by using Donald Trump's name and his reality TV show, The Apprentice.

For many, those riches did not materialize. One former attendee called it a scam he was embarrassed to have participated in.

The intense focus on branding, without much return, extends to other for-profit colleges. The 2012 Senate report found that for-profit colleges spent an average $248 million on marketing and recruitment in 2009. In 2010, the industry hired more than 35,000 recruiters — about 10 times the staff dedicated to career services.

"Overpromise and underdeliver — that's the business model," said Nassirian, who advocates for public, nonprofit colleges. "You want to entice your prospect into making an impulse decision. What they're buying is a future experience."

Of course, all higher education students are investing in a better future. One way to measure that future's likelihood is graduation.

The National Center for Education Statistics estimates that a third of students at for-profit colleges will graduate with a bachelor's degree within six years. The rate is nearly twice that at nonprofit public and private institutions.

Black, of Career Education Colleges and Universities, says that's because the background of someone at Duke University, for instance, is different from that of a community college student.

"It's not an apples-to-oranges comparison," he said, adding that "few institutions in this country are serving the cross section of students" for-profit colleges serve: those who work while in school, those supporting a family, single parents and older students.

That means, no matter how the Trump University lawsuit plays out, its former students will have plenty of company.