Accessibility links
Springfield, Mass., Wrestler Hopes To Win Haiti's First Olympic Medal In 88 Years Asnage Castelly will compete in freestyle wrestling in Rio. He is an American who convinced his birth country — Haiti — to let him compete in a sport that up to now wasn't really practiced there. 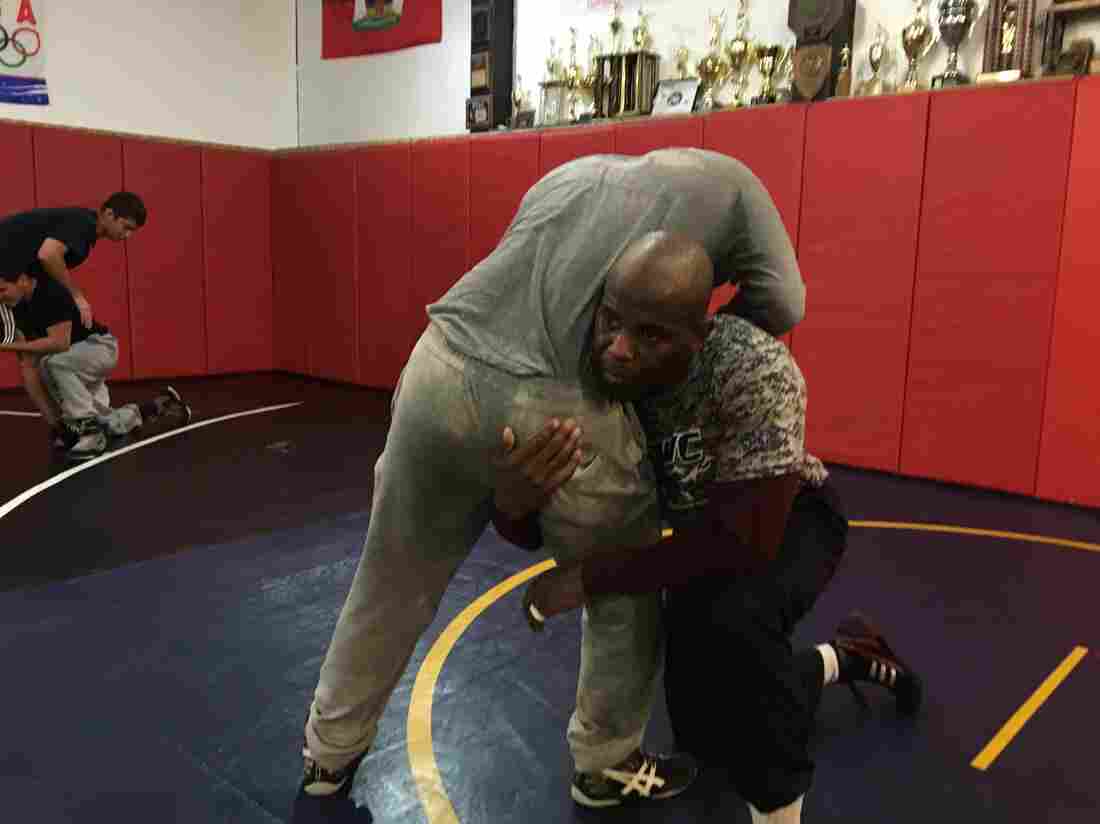 Wrestler Asnage Castelly training in a Springfield, Mass. gym. He will compete in freestyle wrestling for Haiti — the island's first competitor in the sport — this summer at the Rio Olympics. Craig LeMoult/WGBH/Craig LeMoult/WGBH hide caption 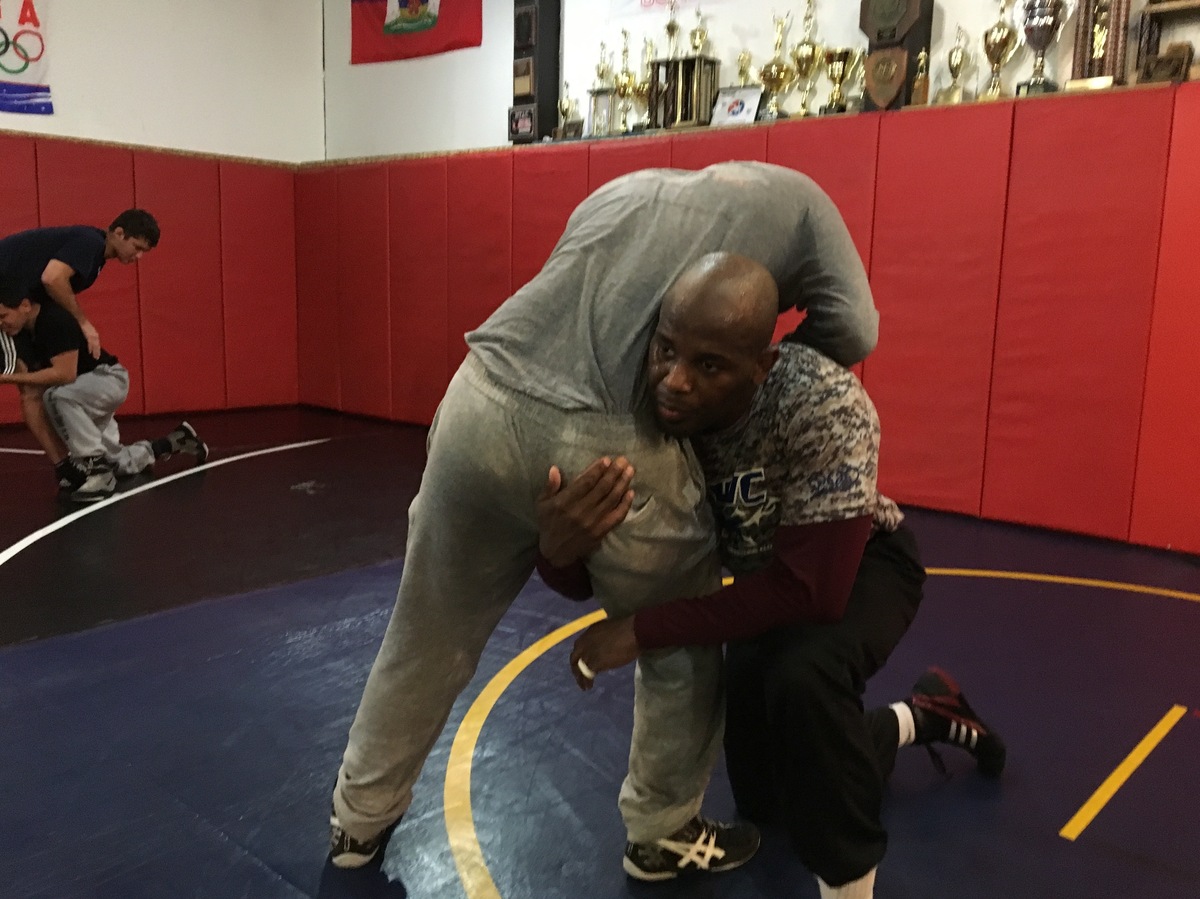 Wrestler Asnage Castelly training in a Springfield, Mass. gym. He will compete in freestyle wrestling for Haiti — the island's first competitor in the sport — this summer at the Rio Olympics.

It's been 88 years since Haiti won an Olympic medal. But come this summer in Rio, Asnage Castelly, a community college wrestling coach from Springfield, Mass., will represent the Caribbean island in the hopes of bringing Olympic glory to a country that's had more than its share of devastation.

Castelly's ticket to the Rio Olympics was not easily earned. He had to convince the nation of Haiti to let him be the first to represent them in a sport that doesn't really exist there.

Castelly was just 9 years old when he left his Haitian countryside mud house for a suburban home in Irvington, New Jersey. He spoke no English at the time.

"So I was that kid, raising my hand, 'Oui, non.' Everybody's like, 'What's wrong with this weird kid?' I used to get picked on. That's where it comes back to fighting," Castelly recalls.

He says his mom used to get upset about him getting in fights. But then one day he saw Olympic wrestling on TV.

"Then I realized I could wrestle. It's controlled fighting. I won't get in trouble with my mother no more."

It wasn't a sport he'd really seen in Haiti.

"I remember growing up, even now you go, bunch of young men would just grab each other, try to slam each other. We don't know the rules to it, but nobody ever got hurt."

A recent mild spring day finds Castelly wrestling at Nieves Wrestling Club. He's an assistant coach in this gym on the third floor of an unremarkable brick building in Springfield, Mass. He also coaches the team at Springfield Technical Community College. And he's in training himself.

Castelly grabs a wrestler around his chest and slams him to the ground. His coach, Anibal Nieves, yells out instructions to him and the other wrestlers he's coaching. Nieves is wearing a T-shirt that says "Haiti Wrestling." Nieves grew up in New York and was a two-time Olympian for the Puerto Rican team, so it made sense to him when Castelly said he wanted to wrestle for Haiti. 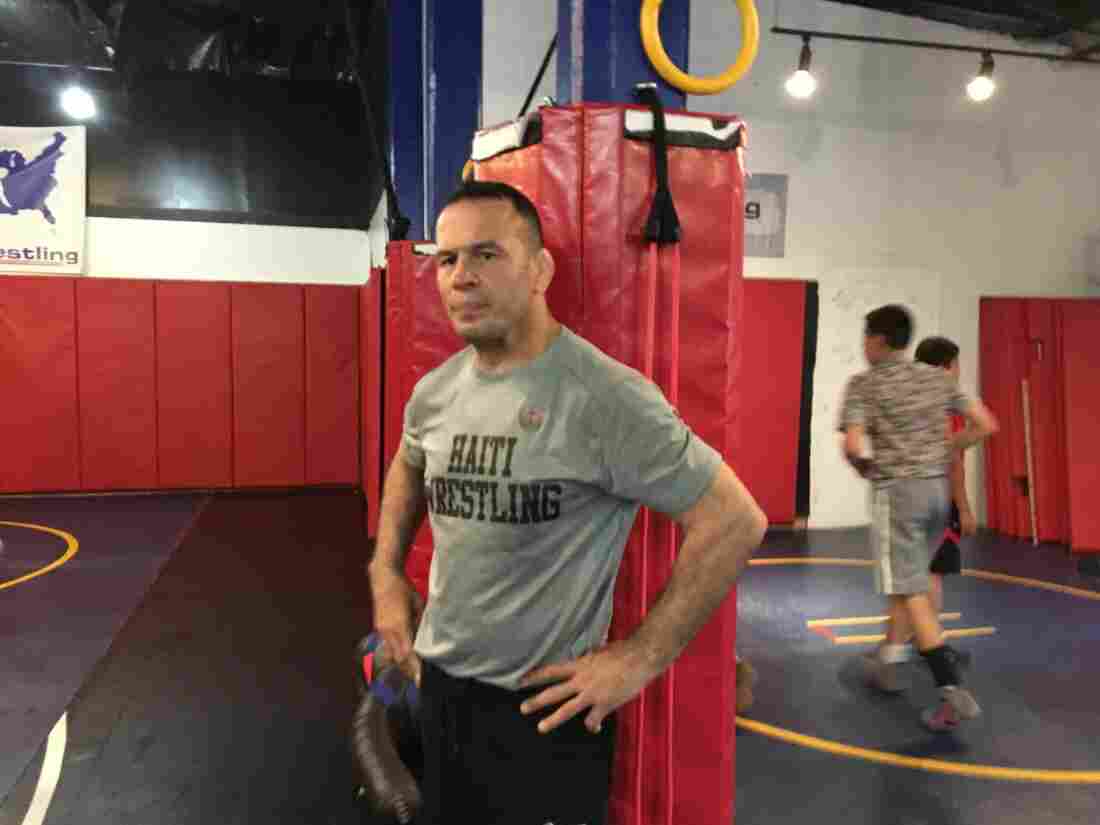 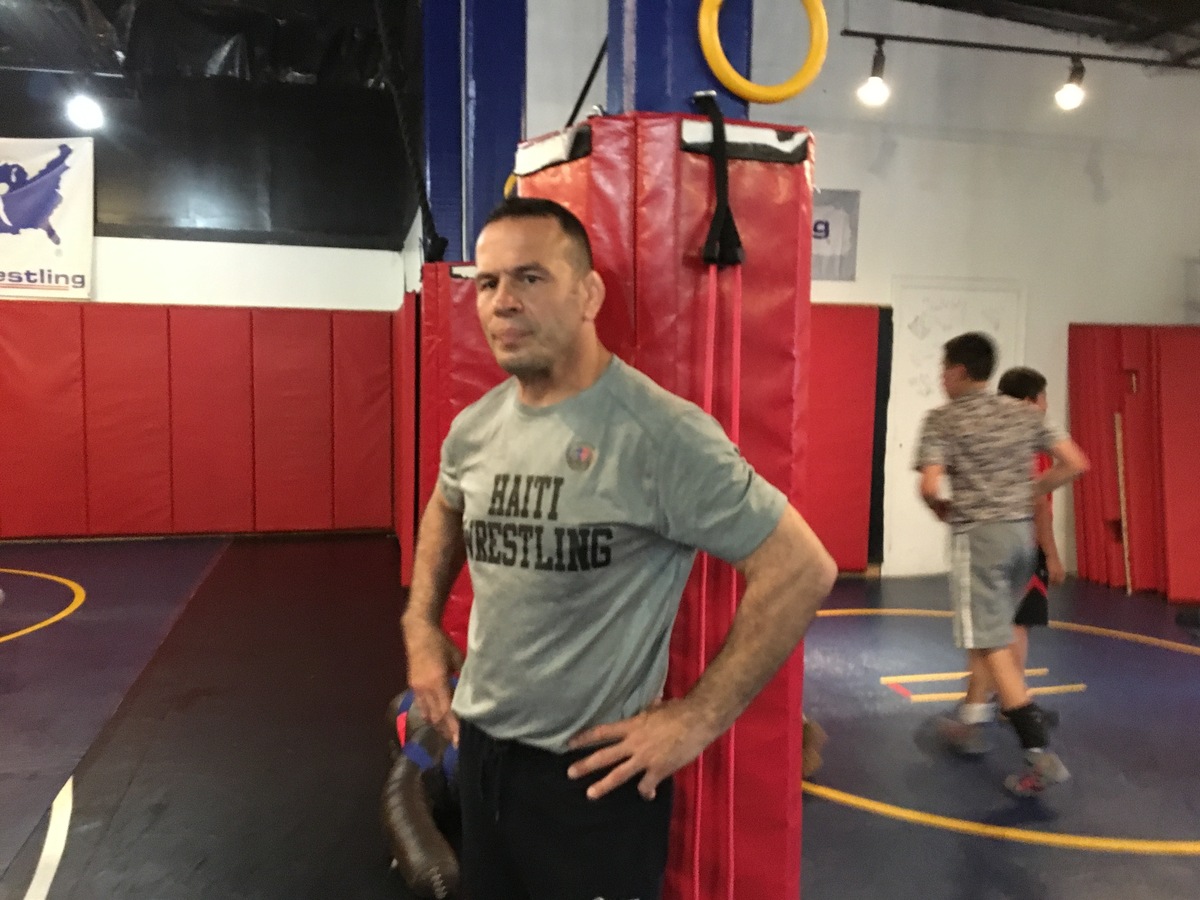 "When Asnage asked me, I said, 'Why not?' A lot of people said, 'You're crazy,' they laughed, just like they did me."

It's actually common now for Olympic athletes to compete for countries where they're not currently living. And while Castelly's definitely Haitian, he's also very American. In fact, he served a tour in Iraq as a Muslim chaplain in the U.S. Army. Still, when it came to wrestling, he decided to pitch the idea to officials in the country where he was born.

Finally, Castelly managed to convince them that they should have wrestling, and that he could do it for them. He competed for Haiti in freestyle wrestling championships as far away as Mongolia. He did well, but not enough to qualify for the Rio Olympics. But the sport's international governing body gets to grant a wild card spot in the Olympics. Early one morning in May, Castelly says he couldn't sleep.

"So I just checked my email, and it said, from United Wrestling, you have been selected for the wildcard, based on performance, blah blah. I'm like, I did a Scooby Doo number, 'HMMM?' I didn't believe it. 'Let me double check.'"

Sure enough, he'd been given a shot to go to Rio. And while that's a huge personal achievement for him, he's not done yet.

"You don't want to just be there. Just say 'Oh, I was in the Games.' You want to continue making history. Before we even got the qualification we were looking at the record, what was the last time someone from Haiti won a medal was 1928."

That's any Olympic medal. Castelly goes back and forth to Haiti all the time - his wife and son actually live there. And he's planning on moving to there after the Olympics. He and his wife are working on introducing the sport to a couple of schools there this year.

"Now what am I going to do to take the country to the next step. Go out to the school. Go out to the street, there's a bunch of kids who are doing nothing, getting in trouble, and give them the opportunity, the same opportunity I received from wrestling. Hopefully they'll be able to experience it, too."

His goal is to have wrestling teams at schools nationwide in Haiti by 2020.