Accessibility links
Artist June Leaf, Still Moving Fast At 86 June Leaf sculpts, paints and draws and she's been doing it for most of her 86 years. Now she's got a retrospective at the Whitney Museum of American Art in New York City.

June Leaf was trained in ballet, but she's been making visual art since she was a kid. That's a long time – she's 86 and the subject of a new retrospective at the Whitney Museum of American Art in New York City.

Much of Leaf's work tells stories, often about relationships, and especially her relationship with her husband, the renowned photographer Robert Frank — who's far better known than his wife. Now, the Whitney retrospective is the museum's way of saying: It's time to pay attention to June Leaf.

The exhibition is meant to be funky — less like a sterile gallery show, and more like Leaf's crowded studio in downtown Manhattan. But that's not really possible.

Leaf's studio is a jumble of work. A metal sculpture of a recumbent woman with wheels is plopped on top of a radiator, paintings and drawings lean against one another on the floor, and the walls are covered with more drawings and paintings like the overlapping handbills on a construction site barrier. Thin sculptures of hands stick out anywhere they can take hold. 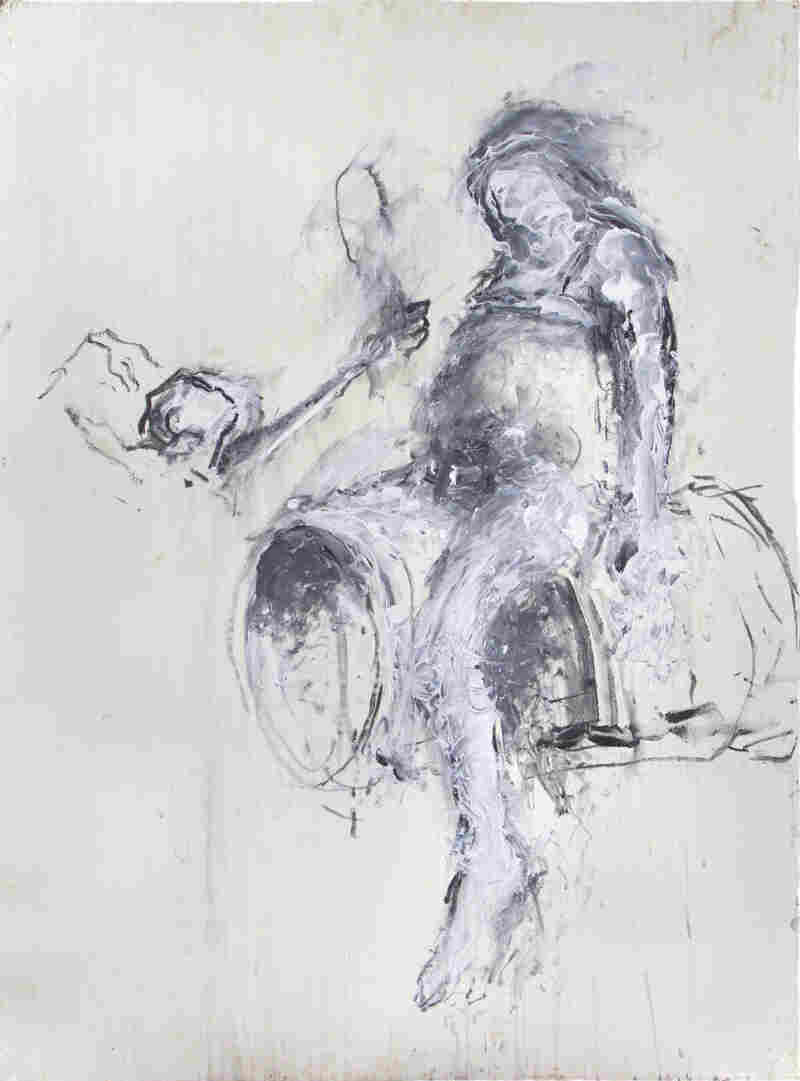 There's so much to see and hear — Leaf talks fast, and she's constantly in motion, more hummingbird than human, tap dancing to show off how well she's healed from a broken hip. "That's will power," she says.

And a determination to get back to work — a trait that started when Leaf was in the third grade in Chicago. She'd finished a drawing and run to show her teacher.

"I held it in my hands as though I were handling a light," she remembers, "and I ran up to her, 'Miss Anderson, Miss Anderson!' And she said 'OK, you can go to the bathroom.' And I thought, oohI get it, that's how it is: You see something, and you really see it, and then you must spend your life to get other people to see it. And that's been my story all my life."

Getting noticed. Especially in the shadow of her husband, Robert Frank. Writer and photographer Alice Attie got to know him first, and later became Leaf's advocate, working as her promoter, arranging work around the studio and inviting museum directors and curators to come take a look.

"June's priority is Robert and her work," she says. "It's not to enter the art world and to push for recognition and it's an effort she'd rather not expend. Women artists in her generation were marginalized ... it's still like that."

There's a continual parade of photographers coming to visit Leaf's husband. She doesn't like cameras, "But I like the idea of the lens, so I made these glasses," she says.

You see something, and you really see it, and then you must spend your life to get other people to see it. And that's been my story all my life.

Leaf's made a bunch of glasses – there's one pair in the Whitney exhibition that have yellow cones in place of lenses, "because I love the idea that you just look at that, right in front of you," she explains. "It simply lets you focus on something, and therefore you love it because you're focusing on it, you don't have to take a picture, you just have the pleasure of focusing what's in front of you."

She hands me a pair with a rear-view mirror attached. "These glasses are so you can look backwards at what's behind you," she says. As an artist, she's always looking back to inform what's ahead. There's a recurring cast of settings and characters in her drawings, paintings and sculptures: Figures astride hobby horses and barrels, staircases that just end, robots both human and not, characters up on stilts.

What she'd like to do is figure out how to make them move — and to do that, she uses the treadles from old sewing machines and the gears from eggbeaters, the old hand-cranked kind.

"It's the closest I can come," she says. "See, the eggbeater moves very fast — I have about 2,000 of them here. See, that's fast, I reverse it so mine moves slow, see, slower, when the big gear pushes the small gear, it makes it go faster — that's the closest I've come to making things move."

Like those eggbeaters, at 86, June Leaf still likes shaking things up. But now, just maybe, it's her time to get noticed.