Accessibility links
Going There: 50 Years After The Chicago Freedom Movement In 1966, Martin Luther King Jr. visited Chicago to fight for fair and open housing. NPR's Michel Martin and WBEZ examined the state of activism in Chicago around fair housing and other issues today.

In 1966, Martin Luther King Jr. visited Chicago to fight for fair and open housing. NPR's Michel Martin and WBEZ examined the state of activism in Chicago around fair housing and other issues today.

A few minutes ago, we talked about Dr. Martin Luther King, Jr. and the Chicago Freedom Movement. Well, earlier this week, we were in Chicago for an event commemorating the 50th anniversary of King's visit to that city in 1966. He'd been asked to come to Chicago to address a number of issues of unequal treatment experienced by African-Americans, but the problem of substandard and overpriced housing quickly went to the top of the list. The many marches and protests that followed became the centerpiece of King's northern campaign.

During the event, we spoke with four people who shared memories of the movement from the 1960s but also compared those times to more recent activism. Historian Beryl Satter described the many practices including redlining and contract buying that prevented black families from building wealth through homeownership in the same way that white families could. Jack Macnamara was a young seminary student who had helped to organize black homeowners and tenants to fight those practices. Tania Unzueta is an organizer on behalf of undocumented immigrants in Chicago. And Malcolm London is a poet and activist who's participated in recent protests against police brutality.

In this part of our conversation, I asked Malcolm London what he'd been taught about Martin Luther King's visit to Chicago and how much he knew about the housing practices that King came to address.

MALCOLM LONDON: I learned about redlining from my grandparents who moved into what is now the Austin neighborhood on the West Side of Chicago. And my grandmother, who is his white, married a very deep-brown-skinned man. And she would tell me stories about how she moved into this Polish neighborhood. Immediately, one, the difficulty to move into that neighborhood, but also, you know, sort of the harsh words that were exchanged - N-word lover, and so forth. And then, subsequently, people started to move out of that neighborhood, and you learn about those things.

But, you know, I think inherently, just even in my own journey, I didn't live in 1966, but I went to school in a neighborhood that is now probably doing this beautiful process which is called gentrification. I went to school in Lincoln Park. And immediately, I saw how vastly different the grass was on my side of town, how vastly different the buildings were, and even the education system when I transferred to Lincoln Park. And I just - you could just tell via this city, you know, the inequity that exists. And I learned that all on the Chicago Avenue bus.

MARTIN: One of the listeners, one of our audience members, wants to ask how did the movement drop the ball over the past 40 years? Is this really 2016? I mean...

MARTIN: Do you feel that the movement dropped the ball, Jack Macnamara?

JACK MACNAMARA: Well, I think that there's one thing that is different from when the riots occurred in the 1960s. The reaction of the dominant culture was basically how do we quell the riots? How do we shut everything up and get everything back to normal?

The law and order thing was the cry of the day then. After Ferguson in Baltimore and all the others, what's happening is that I hear on TV a lot of deeper reflection as to what the causes are, which I find encouraging. I think it took far too long to get to it, and I think we have a long way to go. But it took the Obama presidency first to realize how deeply seated the racism is in our country.

MARTIN: Tania, I wanted to ask you that - there's a long history of activism by Latino, Chicano people in the Chicago area. But do you see support for your activism now in behalf of undocumented people from the community of activists that's already there?

TANIA UNZUETA: Yes and no. I think a lot of the work that we've done as undocumented young people has been based on the work that immigrant rights folks did here. And I feel like I've grown-up benefiting from all of those changes, right? Like, I actually graduated from a university that has a Latino studies program - the University of Illinois at Chicago. That's a complete direct result of the organizing that happened by Latino students at UIC in the '70s and '80s that literally had to occupy a building - right? - in order to have the Latino studies department there.

I think it's hard even thinking outside of the Latino community because I don't think people understand immigrant rights or undocumented rights as a civil rights issue. And the government treats it as an administrative issue, right? Like, the idea is, like, someone didn't fill out the right forms, didn't, like, go through the paperwork and somehow that person becomes undocumented.

And they think of it as an administrative issue, which means people in court don't get to have attorneys for free, for example. They have to pay for them on their own. There's no such thing as, like, asking an officer if you're under arrest or no. There's no Miranda rights. There's violations of people's rights everywhere.

And so as long as we think that immigration enforcement is just an issue of paperwork, we're missing the entire enforcement structure that is actually working to police and incarcerate immigrants, particularly black and brown immigrants.

SATTER: I'll turn to the past to think about the future. And that is, again, turning to James Baldwin, who, like Martin Luther King, talked about why should the dominant culture want to understand what it's done. And his answer was it will let you grow up.

It will let you, you know, understand the world in a non-childlike manner. And it will make you feel strong and whole and adult for the first time because the insight and maturity that comes from understanding the actual systems of oppression is something that is a gift for everyone that we should all aspire to. So that is what I think the dominant culture could get by looking at the conditions it has wrought.

MARTIN: Malcolm London, the floor is yours.

Now I know that's cliche, but, like, love harder. We live in a time where there's not enough love, and love is complicated. Love is a commitment to something, and that it's not just easy. And that we don't just get rid of racism by being in a room together. We get rid of racism by looking at the complex histories that exist and say we will be here long enough and fight long enough in 50 years to eradicate it.

MARTIN: That was Malcolm London. We also heard from Beryl Satter, Jack Macnamara, and Tania Unzueta. They were my guests at an event we held earlier this week with our colleagues from WBEZ. It was called the Chicago Freedom Movement, Then and Now.

In 1966, Martin Luther King Jr. traveled to Chicago with a mission to expand the Civil Rights Movement from the South to the North. King led what became known as the Chicago Freedom Movement, focusing on racial discrimination in housing as well as discriminatory practices by employers. Fifty years later, does King's work still impact the communities he worked to protect and create a better future for?

I'm in Chicago, leading a discussion that reflects on King's time in the city. The conversation features community members who experienced the the Chicago Freedom Movement firsthand, and a new generation of activists who are all too familiar with what fighting for civil rights looks like today. In collaboration with member station WBEZ, Going There: The Chicago Freedom Movement: Then and Now will be a night of compelling conversation and live performances. 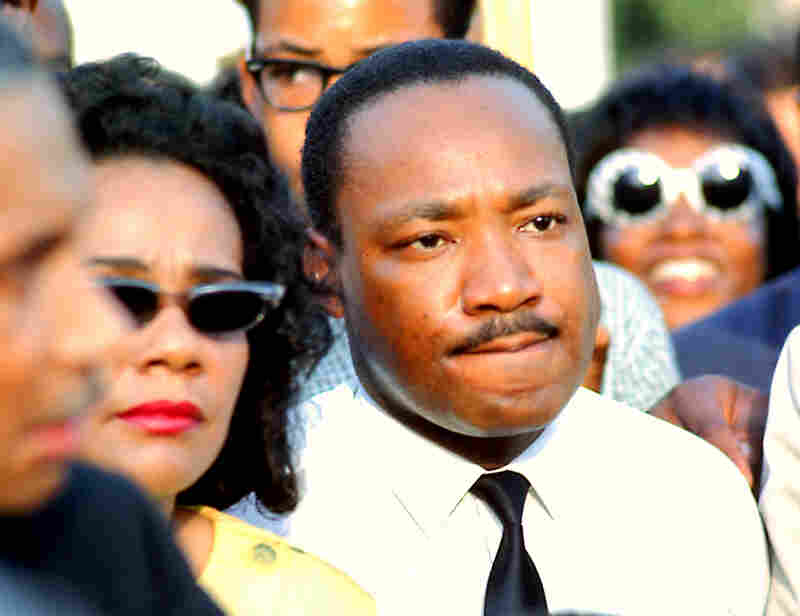 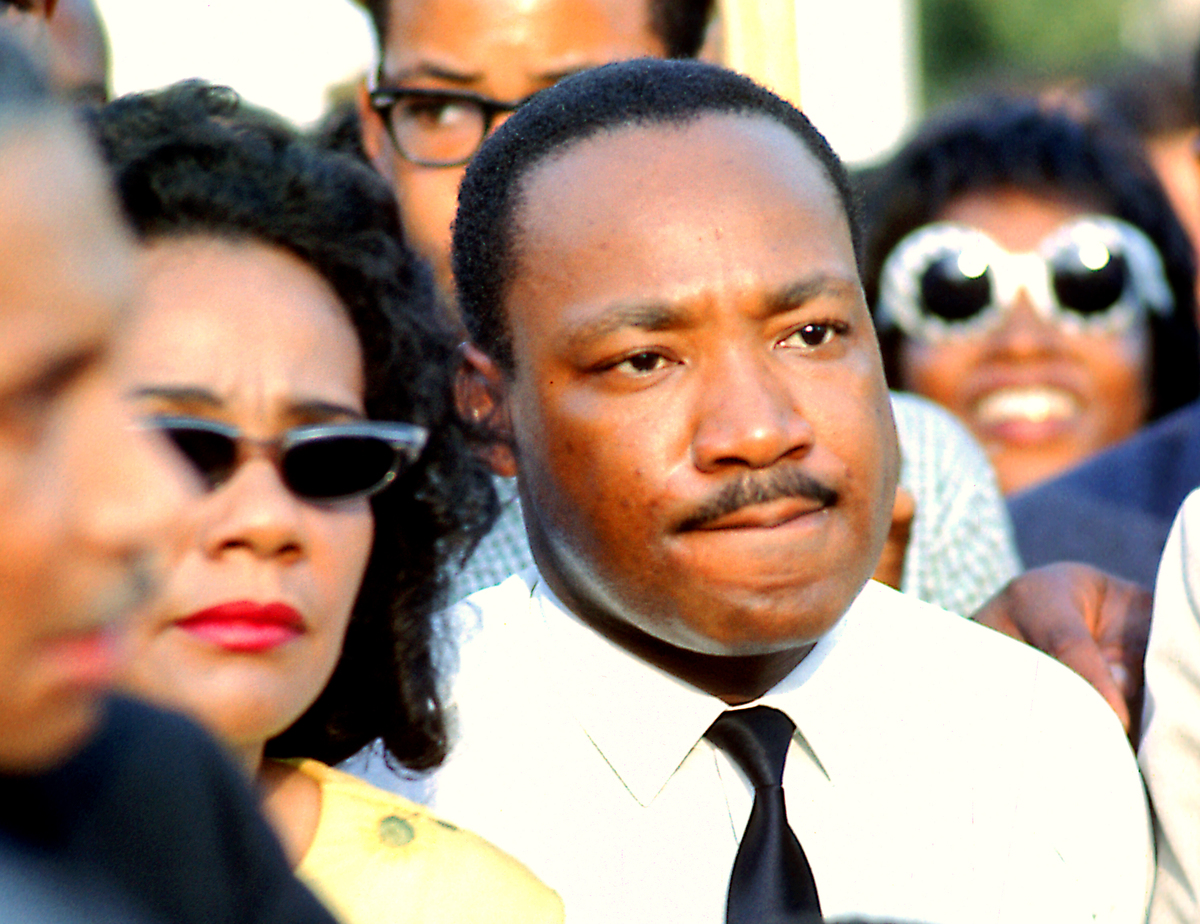 Martin Luther King Jr. and Coretta Scott King at a rally in Chicago's Grant Park in 1966.

See some of WBEZ's 50th anniversary coverage of the Chicago Freedom Movement here.

You can tune in to the live event on this page or via NPR Extra on Facebook.

We're also taking the conversation to social media with a Twitter chat using the hashtag #NPRChicagoFreedom.

Bella Bahhs, @BellaBahhs, is the co-director of the #LetUsBreathe Collective, and is a raptivist, organizer and public commentator working to deconstruct systemic injustice in America and worldwide through art.

Eve Ewing, @eveewing, is a sociologist of education whose research is focused on racism, social inequality, and urban policy, and the impact of these forces on American public schools and the lives of young people.

Evan Moore, @evanFmoore, is a Chicago-based journalist who writes about sports, crime, violence and politics. His work has been featured in Ebony, Chicago Magazine, DNAinfo, The Shadow League, The Athletic, RedEye, Crain's Chicago Business and Community Media Workshop's We Are Not Alone/No Estamos Solos Project on Youth Violence.

Martin V. Torres, @MartinVTorres, is the associate director of the Latino Policy Forum in Illinois and guides legislative and administrative advocacy with a focus on early childhood education, immigrant integration, housing and state fiscal policy.

Gabrielle Wright, @GabiAWright, is part of the WBEZ team in Chicago. Before joining WBEZ in her current role as digital producer, she interned with Curious City and the Brian Lehrer Show at WNYC Radio. Her interests include the intersection of performance and civic engagement, oral history and theater.

Jack Macnamara is a visiting scholar at the Center for Urban Research and Learning at Loyola University Chicago.

Beryl Satter is a professor and author of Family Properties: How the Struggle Over Race and Real Estate Transformed Chicago and Urban America.

Tania Unzueta is the co-founder and organizer of Chicago's Immigrant Youth Justice League, an organization focused on immigrant rights.