Accessibility links
Orlando Shooting: Latino, LGBT Community On Why Attack Is Personal The shooting in Orlando cut deep through the gay and Latino communities. NPR's Rachel Martin talks to Xorje Olivares, Miriam Zoila Perez and Veronica Bayetti Flores about how the losses affected them. 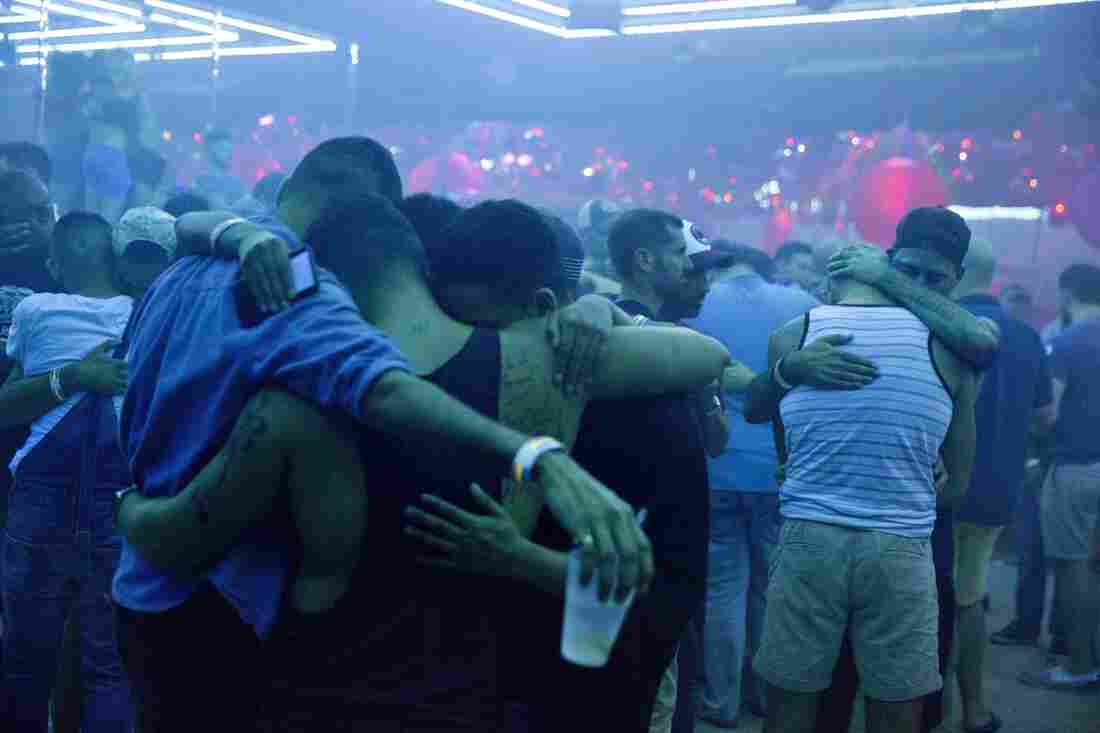 Club goers embrace at the approximate time one week ago that the Pulse nightclub mass shooting began. The music is turned off on the dance floor to observe a moment of silence at Parliament House, an LGBT nightclub early Sunday in Orlando, Fla. David Goldman/AP hide caption 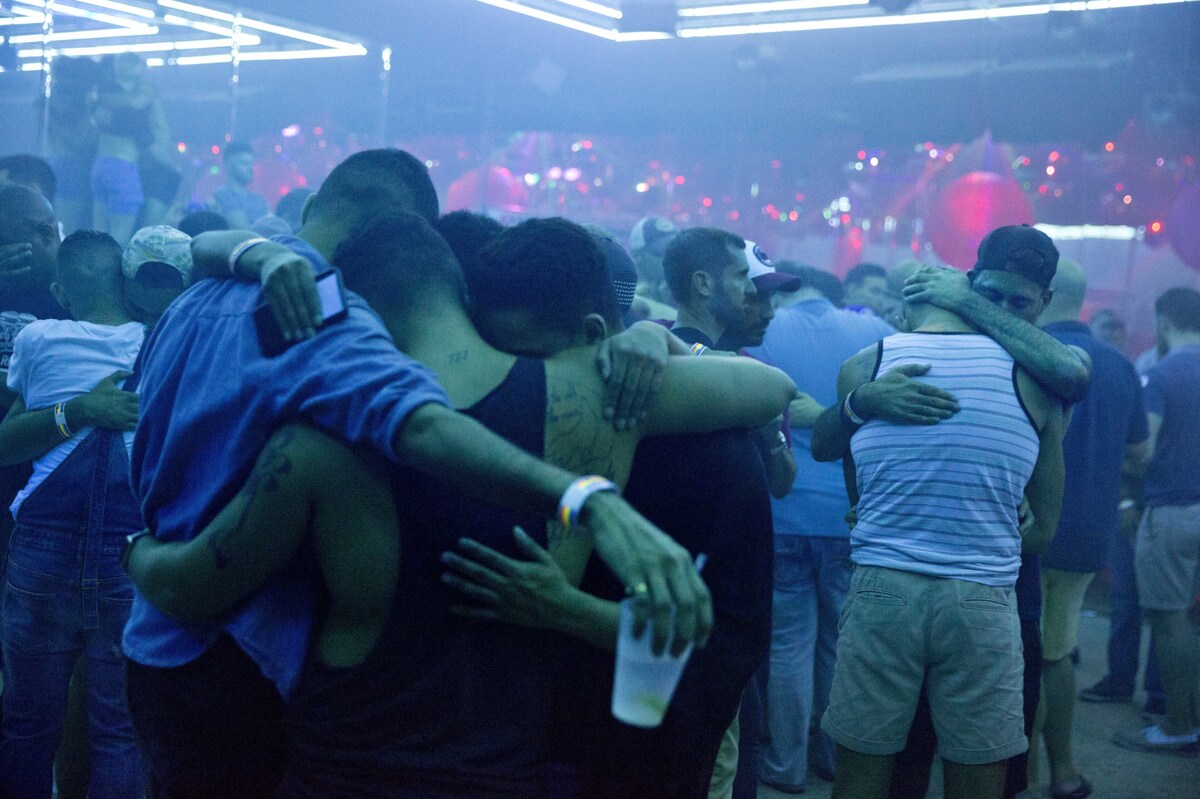 Club goers embrace at the approximate time one week ago that the Pulse nightclub mass shooting began. The music is turned off on the dance floor to observe a moment of silence at Parliament House, an LGBT nightclub early Sunday in Orlando, Fla.

In the early morning hours last Sunday, reports of a shooting, resulting in 'multiple casualties' at Pulse nightclub, began to filter out of Orlando.

When Mayor Buddy Dyer took the podium to update the press, it was worse than anyone imagined: 49 victims dead and 53 more wounded.

But the scene of the massacre didn't just happen in any nightclub. It was a gay club. On Latin night. About half the victims were of Puerto Rican descent. Others had roots in Mexico, Cuba, Venezuela, Guatemala and the Dominican Republic.

This week on For the Record: Two cultures grieve a very personal attack. We hear from three voices from the Latino and LGBT community.

"I was like the out kid who wasn't really out. Like everybody assumed that I was the gay one," Olivares says. "But unless I really cared for you I wouldn't confirm it."

He lives in New York now but he grew up in Texas along the U.S.-Mexico border.

He says he knew he was gay when he was in elementary school, but felt that personal identity didn't mesh with his family's cultural identity.

"But I still never wanted to say anything because of this inherent machismo culture that comes with Latino identity and Mexican-American identity. It's this idea of you know, the big Stetson cowboy hat, the cowboy boots, the big buckle, the guy who's drinking all the beers and just is the bread winner, and just is the person who has all the control. And early on I knew that I wasn't that person."

The Catholic church was a big part of Olivares' family too, which complicated things. His mom was president of the altar society, his dad decorated the church for Palm Sunday and Olivares was an altar boy.

He waited to come out to his parents until he was in his early 20s and had already moved to New York.

"Whether because of the Mexican-American identity, or because of the Catholic identity, I was afraid i was going to get disowned. And if I lived in New York and I was already on my own, then I didn't have to worry about that."

"I know because of the close relationship I have with my parents, there was really no reason to feel that way. But I felt like if I prepared for the worst and if it wasn't that bad, then I was at least already better prepared for it than if I hadn't."

When he finally did tell them, it was over Skype.

"They didn't really react and they immediately changed the subject and started talking about something else. And the conversation went for like another hour."

It was an awkward hour to say the least.

His mom came to terms with it fairly quickly but Olivares didn't talk to his dad for several weeks after that conversation. Eventually the two of them reconnected and his dad laid out what he was feeling.

"My father said he needed to grieve the son that he imagined me to become, with this idea of, you know, when I came out I was 22 and he said, 'I had these 22 years to figure out the wedding, the wife, the kids, planning all these different things that you imagine your child having,' " Olivares recalls. "At the end of the day, he just said to me, 'I'm just scared for you. I'm scared for your safety. There are a lot of people out there who hate people like you for being LGBT and then the fact that you're brown is even worse. So just be careful.' "

The night of the Orlando shooting, Olivares had been out dancing with friends in New York. The next morning he turned on his TV and saw the headlines.

"I just kept hearing Latin night, LGBT club, and all of it happening during Pride. It really hit close to home. it was one of those things that I thought, wow, they really went for us."

Of the 49 victims killed that night, some were gay, some were not. Maybe all of them were out, maybe they weren't. And that's the question that preoccupies Olivares.

The other thing Olivares can't shake is the feeling that this idea of the gay club as a refuge for his community has been violated.

"It's one of those things where we just have to take it back. We have to find a way to make it ours again."

Miriam Zoila Pérez and Verónica Bayetti Flores are both Latina, lesbian, and for the past week, like others in their community, they've both been consumed by the Orlando attack.

"Now that this has happened, this is just a part of our experience as people and the memory of the people who were murdered, the poignancy of the next time we're all gathered at a queer Latino night in D.C., or wherever, we're not going to be able to be in that space without thinking about the people who we've lost and what that means," Pérez says. "Nothing I planned on doing post-Sunday is going to be the same. Everything is shifting."

Pérez and Flores, co-hosts of the music podcast Radio Menea, say the music in particular is a crucial element to that sense of connection.

"Music is one of the reasons that people seek a Latino night at a club, because being Latino comes with a really rich culture which includes specific kinds of music, and at this time music has been something that we've been using to mourn and to feel connected and to grieve."

In that spirit, they've left us with a few handpicked songs that are resonating with them right now — songs that speak to both the tragedy of that night and the pride they continue to carry with them.

Miriam Zoila Pérez: It was playing at Latino night on Thursday night at the party I was at for Latino pride in D.C. It stuck out at me amongst a night of great music. I remember dancing to it with my friends. And then the poignancy of the fact that Selena was actually murdered at 23 years old. Her life and her legacy has taken on a poignancy for the Latino community, particularly for Mexican-Americans.

'The Body Electric' By Hurray For The Riff Raff

Verónica Bayetti Flores: [The artist] Alynda Lee Segarra is a queer Puerto Rican woman. I think about the deep and crippling economic crisis that Puerto Rico is going through right now. The island is losing about 1,000 people a week, in a diaspora. And many of them are landing in Orlando. The other reason is that this song is about violence. It's about transphobic violence and homophopic violence and police violence. And I think that it really reflects some of the ways that LGBTQ Latinos experience violence in this country.

We'll let their final song choice speak for itself as an appropriate anthem.

'Yo Viviré (I Will Survive)' By Celia Cruz