Accessibility links
HBO's 'Suited' And The Search For The Perfect Fit A new documentary follows the clients of a custom suiting shop that works with clients who are transgender or gender-nonconforming.

HBO's 'Suited' And The Search For The Perfect Fit

HBO's 'Suited' And The Search For The Perfect Fit 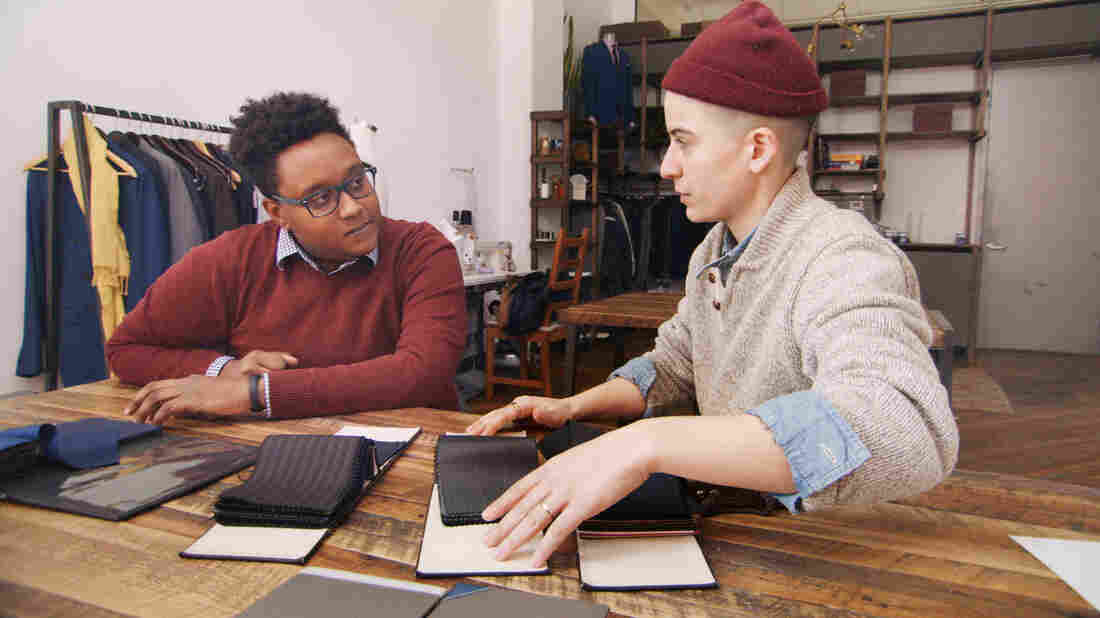 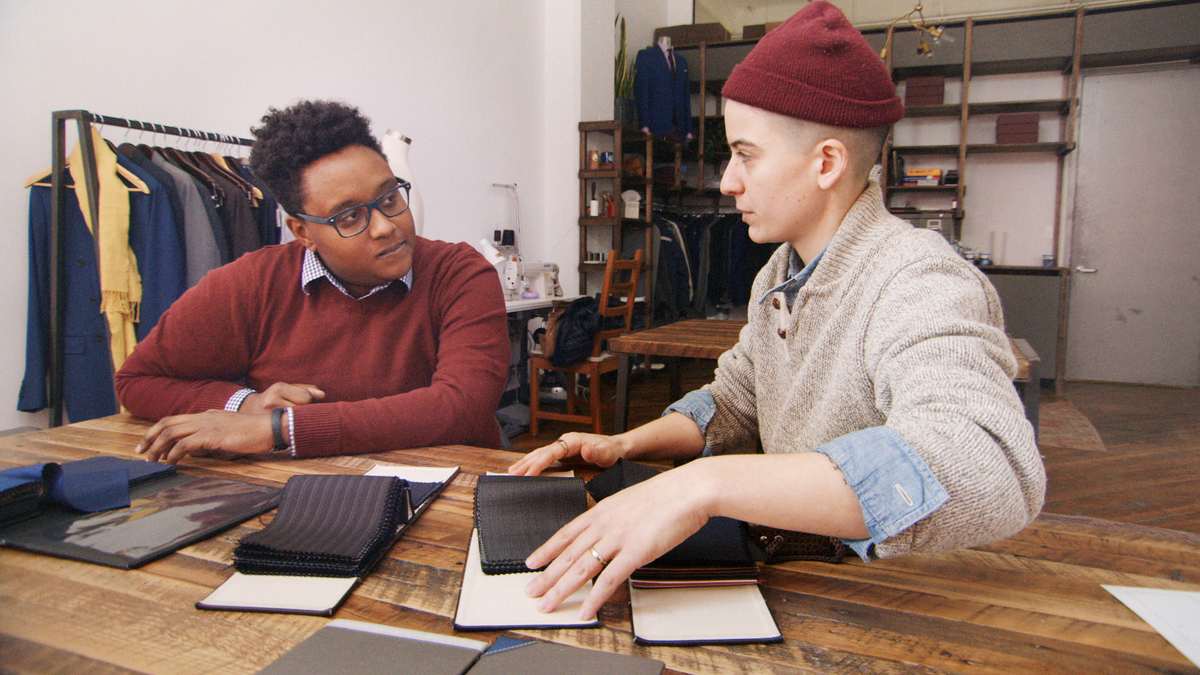 "Specificity is the soul of narrative" is a thing John Hodgman likes to say when he's hearing cases on the smart and funny Judge John Hodgman podcast, and it's applicable to documentary film, too. Documentaries devoted to a topic with heft do better if they can find a particular angle, a particular way into the question. It's generality — "Let's just talk about this kind of person and what this kind of person's life is like" — that leads to documentaries that feel well-meaning but flat and toothless.

HBO's new documentary Suited, directed by Jason Benjamin, is about gender identity and transgender people. But it meets their stories at a specific place: Bindle & Keep, a Brooklyn custom suiting shop that caters to people who are transgender or gender-nonconforming or nonbinary — people who, for reasons related to gender identity, have trouble finding suits that fit their bodies and feel congruent with how they want to look. (A note: If you heard the shop Saint Harridan profiled on Startup recently, that's a different store with some similar elements in its mission.)

Bindle & Keep is run by Daniel Friedman and Rae Tutera. Tutera grew up with the name Rachel and later had gender confirmation surgery resulting in a certificate Tutera reads aloud declaring a male gender, but who also says that of "she" and "he" and "they" as pronouns, none really feels like misgendering. As for Friedman, he says he never really anticipated this path — he saw himself making suits for Wall Street dudes — but he got to it through Tutera and has clearly committed fully.

Suited follows several Bindle & Keep clients from their first appointments. There's Derek, who needs a suit for his wedding; Everett, who's just started law school in Georgia and has been warned that being trans will present problems in his field; Mel, a gender-nonconforming cab driver who needs a suit for a 40th birthday party; Aidan, a transgender teenager whose grandma brings him in to get a suit for his bar mitzvah; Grace, who wants a suit to "run around in"; and Jillian, a trans woman attorney who's about to argue an important transgender rights case and needs a suit for court.

There's something very clever about the construction of the documentary, simply because of the close connection between the way gender identity functions in the film and the way fashion does. Gender expression, for most of the documentary's subjects, involves protecting what's specific and personal in their gender identities against easy classifications that have been constructed from the broad outlines of other people's experiences.

And with suits, too, part of what brings these clients to Bindle & Keep is that they want to assert something specific and personal through their appearance, and they don't want to be limited by tailors who confuse an individual style decision with something inherent to women or men or people with particular bodies. A tailor might expect a suit-wearing body to be shaped a certain way or may not understand why not everyone who has breasts, for instance, wants them to look the same way in a suit.

Caring about the way you present to people visually doesn't always get a lot of respect — beauty's only skin-deep, don't be shallow, it's what's inside that counts. But those are very often platitudes aimed at defending the merits of people who don't fit traditional beauty norms. That's a different question from whole industries not adequately providing people with services everyone else can access that afford social and professional advantages. Everett, for instance, needs a suit for job interviews in the legal field; he didn't make that rule. And he has trouble finding one that both fits correctly and feels like it reads consistently with his gender identity. Finding a way to accommodate the right to individuality and the right to conformity — to use fashion as both personal expression and common cultural language if you choose — is powerful if you want to have the same options everybody else has.

It would be really easy in a post-Transparent, post-Caitlyn-Jenner era to feel like Suited -- which is produced by Lena Dunham and Jenni Konner, both of the Girls team — is a documentary designed to tell its natural audience a series of things that audience probably already believes. It would feel less valuable if, for instance, its only function were to assert that being transgender is real and difficult — not because those things aren't still often challenged and threatened in the society these folks live in, but because if you're choosing to tune in for this film (about transgender people, on HBO, produced by Lena Dunham), you probably don't consciously greet those ideas as new. Most people who sit down to watch Suited will be people who at least think they know that part already.

But Suited doesn't just challenge narratives that don't acknowledge trans people; it challenges limitations on which narratives about trans and gender-nonconforming people have been most prominent on television and in film in the last few years. It tells the story of Derek, who transitioned a number of years back with the help of very supportive parents, and of Jillian, who says that when she decided to transition and come out as a woman, it was like getting out of prison. But it also tells stories about Rae and Mel and Grace, who find gender identity complex enough that there's no single transition or coming-out, as between two completely separate genders, that feels neatly right to them; they all repeat that it's a matter of figuring out how to live comfortably as themselves.