Accessibility links
Donald Trump's Campaign Manager Corey Lewandowski Is Off The Campaign Corey Lewandowski's departure appears to be a reaction to the presumptive GOP nominee's sagging poll numbers and weeks of difficulty as he prepped for a tough fight with Hillary Clinton. 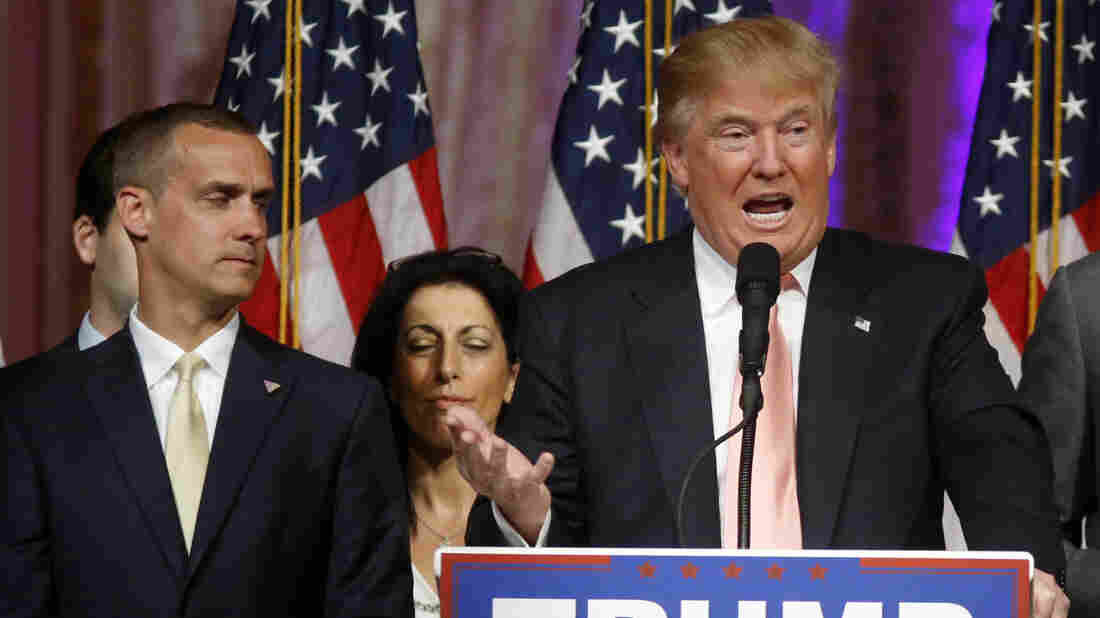 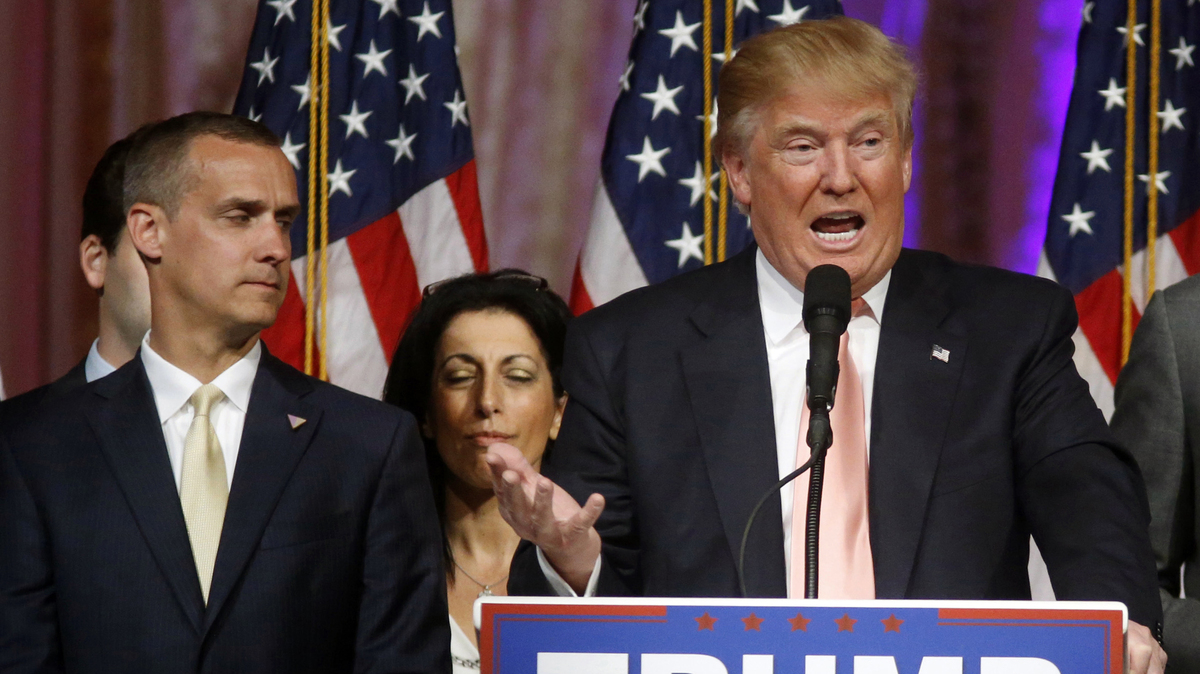 The move appears to be a reaction to the presumptive GOP nominee's sagging poll numbers and weeks of difficulty as he prepped for a tough general-election fight with Hillary Clinton.

Hours after his abrupt exit, Lewandowski gave a pair of television interviews in which he put a positive spin on his exit.

"I wouldn't change one second of my time with Mr. Trump other than to say thank you, it's been an honor," the usually brash Lewandowski told MSNBC in brief comments.

In a nearly 30 minute interview with CNN's Dana Bash, Lewandowski said he didn't "know the answer" to why he was fired, but instead pointed to their record successes in the GOP primary campaign.

Later on Monday, there was a resignation from the campaign's staff preparing for the Republican National Convention. Michael Caputo, director of communications for caucus operations at the convention, quit after tweeting a message mocking Lewandowski's firing. "Ding dong the witch is dead!" Caputo tweeted, with a photo of the ruby slippers on the feet of the Wicked Witch of the East from The Wizard of Oz after she was crushed by a house.

"Unforced errors have no place on a general election campaign for the White House," Caputo said in a statement to NPR.

While some campaign sources tell NPR Trump's split with Corey Lewandowski was "mutual," another described it as a "firing" and a "summary execution." The source said the news was unwelcome for Lewandowski at the weekly Monday staff meeting. The "weekly Monday morning family meeting went awry for Corey," the source said.

Officially, the campaign tried to put a good face on it. "The Donald J. Trump Campaign for President, which has set a historic record in the Republican primary having received almost 14 million votes, has today announced that Corey Lewandowski will no longer be working with the campaign," spokeswoman Hope Hicks said in a statement. "The campaign is grateful to Corey for his hard work and dedication and we wish him the best in the future."

Lewandowski has been with Trump since he began his presidential run, managing his shoestring operation. But as Trump has moved into the general election, a more traditional campaign structure largely managed by Paul Manafort, a former Ronald Reagan aide, has emerged. Within the campaign, Manafort and Lewandowski have been seen as competing forces. A campaign source told NPR that Trump previously had liked the competitiveness between the two.

"[Corey] knew there was a battle brewing. I am certain he thought he would win," one campaign source told NPR.

In his interview with CNN, Lewandowski denied any tensions between the two, telling Bash that, "Paul and I have been getting along amazingly well."

Lewandowski said he would remain a Trump delegate from New Hampshire and would continue to work to help him beat Clinton in whatever way he could and was leaving with no "professional" regrets.

The now-former campaign manager, though, has been a source of controversy himself. There were accusations — and a battery charge that was later dropped — following a confrontation with a former reporter for Breitbart News in which Lewandowski was seen on video appearing to grab her arm. The news of his ouster on Monday was first reported by the New York Times.

Trump stood behind Lewandowski amidst those charges at a time when his ouster would have been a given for any traditional campaign. But CNN reported Monday that the breaking point appeared to have been growing tensions between himself and Trump's daughter, Ivanka, and son-in-law, Jared Kushner. Sources confirmed to NPR that Kushner was indeed playing a bigger role in the campaign. Lewandowski told CNN's Bash that he had a good relationship with all of Trump's family.

Even though Trump effectively clinched the Republican nomination more than six weeks ago, his campaign has yet to prepare for the usual rigors of a general-election campaign — hiring top staff, preparing a rapid response and communications team and beginning fundraising and building a data-analytics operation.

Instead, Trump has continued to swirl in controversy, targeting a judge presiding over the Trump University fraud case by accusing him of bias because of his Mexican heritage. He doubled down on his Muslim immigration ban and expanded it after last week's deadly shooting at a gay nightclub in Orlando, Fla. He called for a ban on anyone coming to the U.S. from any country with a proven history of terrorism against the U.S. or its allies. He also made confusing comments on guns, initially saying that if clubgoers had been armed, the shooter could have been stopped. He walked that back after even the NRA disagreed with him.

Lewandowski helped preside over Trump's unconventional primary campaign, bolstered by the billionaire businessman's sheer personality and ability to command the news cycles, dwarfing his GOP opponents. But in a general election, Trump hasn't been able to do the same.

Manafort was brought on earlier this year to help professionalize the skeletal, disorganized Trump operation. But there was reportedly tension between the two, with Lewandowski wanting to keep the same approach that had worked before, while Manafort worked to make Trump pivot to a more disciplined general-election approach.