Accessibility links
Book Review: 'Vinegar Girl,' By Anne Tyler Anne Tyler's latest is part of a series of Shakespeare plays turned novels; she's turned The Taming of the Shrew into a modern screwball comedy about an absent-minded scientist and his daughters. 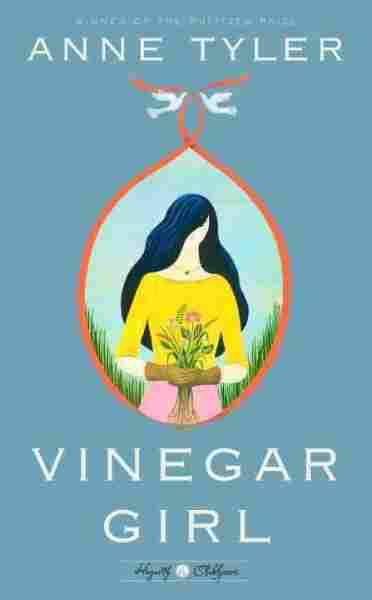 Despite its ever-controversial sexism, The Taming of the Shrew remains one of Shakespeare's most popular comedies — in both the original and its many modern adaptations, including Cole Porter's Kiss Me Kate. And now Anne Tyler, as part of the Hogarth Shakespeare series of novels based on the major plays, has tamed the Bard's shrewish battle of the sexes into a far more politically correct screwball comedy of manners that actually channels Jane Austen more than Shakespeare. It's clear that she had fun with Vinegar Girl, and readers will too.

Tyler's heroine, 29-year-old Kate Battista, isn't so much quarrelsome or headstrong as outspoken and tactless. She's sharp, witty, anti-social. But like so many quirky Tyler heroines, she is stuck in a rut, living at home in Baltimore — where else? — where she takes care of her ditzy, much prettier 15-year-old sister, Bunny, and their absent-minded, socially inept father. Louis Battista, standing in for Shakespeare's Paduan, Baptista Minola, is a biochemist at nearby Johns Hopkins who believes he is on the cusp of a breakthrough in his decades-long research into autoimmune disorders. (Their mother, depressed and in and out of "rest facilities" for much of Kate's early life, died shortly after Bunny's birth.)

After Kate got kicked out of college her sophomore year for mouthing off at a lazy professor, she never bothered to go back to school, despite prodigious smarts and a deep interest in botany. She has been home ever since, gardening in her spare time and working for the past six years as a hilariously inappropriate assistant preschool teacher who habitually flouts the "Something Nice" rule. (At lunch, she spurns the pasta, pointing out to her shocked young charges that it "smells like wet dog.") Tyler writes, "She completely lacked authority, and all the children knew it; they seemed to view her as just an extra-tall, more obstreperous four-year-old."

Baffled by etiquette and conventions she never learned at home, Kate is surprisingly compliant with her father, whom she strongly resembles. She dutifully toes the line on his outlandish household system designed to maximize efficiency, which includes microwaving refrigerated leftover wine to bring it to optimal temperature and cooking up a nutrient-rich, time-saving mash of beans, green vegetables, potatoes and stewed beef "pureed into a grayish sort of paste to be served through the week" that's repulsive just to read about.

But when Louis comes up with a scheme for Kate to marry his brilliant lab assistant, Pyotr Shcherbakov, to save him from deportation when his three-year visa expires, she takes offense. "He must think she was of no value; she was nothing but a bargaining chip in his single-minded quest for a scientific miracle," she fumes.

The verbal sparring between Kate and everyone else is charming, though sometimes surprisingly quaint: What 29-year-old would say "Oh, hang the man! He's a lunatic," and what angry, up-talking teenager would hurl "two peas in a pod" as her worst insult to her father and sister? But Tyler's delight is generally contagious. She has a field day with Pyotr's Russian attitudes, accent, abrupt declarations, and Old World proverbs like "Beware against the sweet person, for sugar has no nutrition."

Vinegar Girl is a fizzy cocktail of a romantic comedy, far more sweet than acidic.

She also works in sly digs at American culture, as when Kate's suitor comments trenchantly on Bunny's short-lived vegetarian phase, "Is so American, subtracting foods! Other countries, when they want healthiness they add foods in." This is a man who is bullish on bluntness, including Kate's. "Why Americans always begin inch by inch with what they say?" he asks, referring to all the equivocating ums and wells that mark American speech.

Shakespeare, as we know, relied on numerous sources, which he bent to his own purposes for his plays. So it's in keeping with this tradition that Tyler, too, extracts what she wants from Shakespeare's Shrew and cuts his plotline about Bianca and her suitors. Vinegar Girl is a fizzy cocktail of a romantic comedy, far more sweet than acidic, about finding a mate who appreciates you for your idiosyncratic, principled self — no taming necessary.