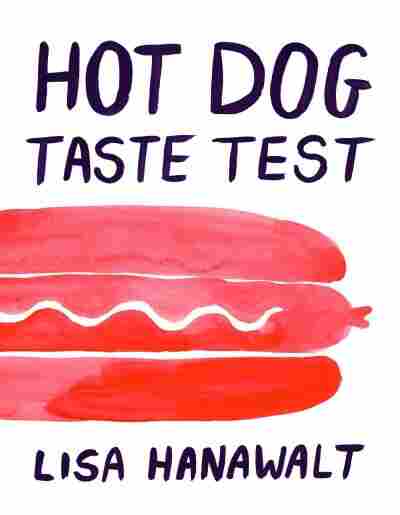 If you're a fan of the Hot Dog Princess, you're going to love Hot Dog Taste Test. Lisa Hanawalt's lushly illustrated, stream-of-consciousness diary reveals a soul cut from the same vibrant cloth as that of the 6-year-old who wore a hot dog costume to a princess-themed dance recital. Both the 6-year-old and the grownup diarist understand that there's only one option for a free spirit confronted by the forces of conformity: You've got to go completely orthogonal. For a non-princess in a tulle-clad world, that means making an instinctively Dadaist gesture (and making national news with it). For a cartoonist who covers gourmet food — and even won the James Beard award — but is determined not to succumb to gourmet pretensions, it means filling a food book with Dalí-esque surrealism.

Hot Dog Taste Test overflows with colorful oddities. Hanawalt, who's the production designer and producer of the Netflix cartoon BoJack Horseman, draws yuppie songbirds, bananas worn as shoes, a neurotic toucan, "a pinch of stir-fried dirt," the latest trends in menstrual huts, sexualized kiwi birds and an array of otters in lavender swimsuits and matching caps. She reflects endlessly on how to violate food taboos in the weirdest way possible, even musing on the greatest food taboo of all: The matter of when and how it comes out the other end. She designs a straw toilet (so people grossed out by public restrooms can sit on nests instead) and depicts herself peeing.

That's not even the weirdest way she depicts herself, either. The prize would have to go to her sketch of her own hand inspired by a trip to a Las Vegas buffet. The hand has long red crab legs attached to each finger and tiny food speared on the ends. This, she suggests, is doable in the atmosphere of license that pervades the buffet.

"You can stick petit fours onto the ends of crab legs, tie them to your fingers, and run around calling yourself Edward Cakecrabhands, and you will simply be offered more crab," she writes. "There are no consequences to my actions here, and it's intoxicating."

Her sense of humor resembles that of another wacky, wise New York cartoonist, Roz Chast. But Hanawalt is further off-kilter than Chast, and more disruptive.

There are also hot dogs. Hanawalt is drawn to the humble snack for its unpretentiousness, its ubiquity and its economical lines. The hot dog on her book's cover is made up of a few minimalist curves — the bun, the protruding tip of the dog and a squiggle of mustard. (Even though many people eat their hot dogs piled high with disparate condiments, there's something about that lone, iconic squiggle of mustard that seems to encapsulate the meal's elemental simplicity. The Hot Dog Princess' costume had one too.) Early in the book, in a piece on street food, Hanawalt reflects on the hot dog carts that are a regular feature on the streets of New York:

"It's a mystery how enough people are eating 'dirty water dogs' to support the number of carts," she writes. "They taste a bit like petroleum, and they're a little extra soft from the boiling. But throw some ketchup and relish on there and tell me that doesn't taste 'Okay!'"

Hanawalt's street food piece also includes a sidebar on "street food for dogs," such as bagel crumbs, a dead leaf, a live bug and — possibly — a piece of tinfoil. It's charmingly drawn, like all her artwork. The colors are bright, the lines are clear, and the dog is smiling. It shows how she embodies two anti-elitist tendencies that are normally at odds: wackiness and down-to-earthism. Her sense of humor resembles that of another wacky, wise New York cartoonist, Roz Chast. But Hanawalt is further off-kilter than Chast, and more disruptive. It's impossible to imagine Chast casting a series of real clay plant pots shaped like masturbating animals, for instance. Photos of Hanawalt's pots are included here.

Hanawalt's perverse effervescence has its limits, though. About two-thirds of the way through the book, things slow down a lot. Her diaries of a visit to an animal preserve and a trip to Argentina are pretty standard travel stories. But her frisky watercolor brush and lavish hand with color make these sections almost as memorable, and certainly as diverting, as the mind-bending games of earlier pages. And her final story, about buying her own horse (and thinking about eating it), is just as unsettling. Hanawalt's creativity may not be quite as inexhaustible as the offerings at a Las Vegas buffet, but her powers are just as rich and strange.