Accessibility links
Oprah's New Show 'Greenleaf' Is Megachurch Melodrama Oprah Winfrey returns to a regular TV drama role for the first time in two decades, appearing in Greenleaf, a scripted drama set in a Memphis megachurch. The show premieres Tuesday on her OWN network. 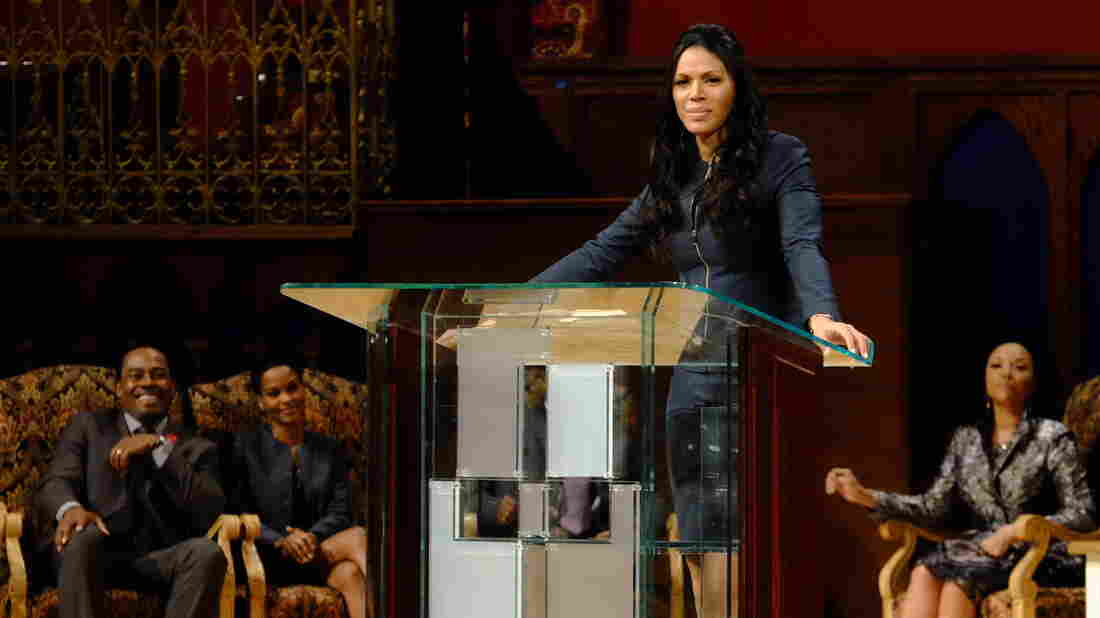 Merle Dandridge stars as Grace Greenleaf, who returns to her family's megachurch after 20 years away — and gets caught up in a swirl of secrets and lies. Guy D'Alema/Oprah WInfrey Network/Lionsgate Films hide caption 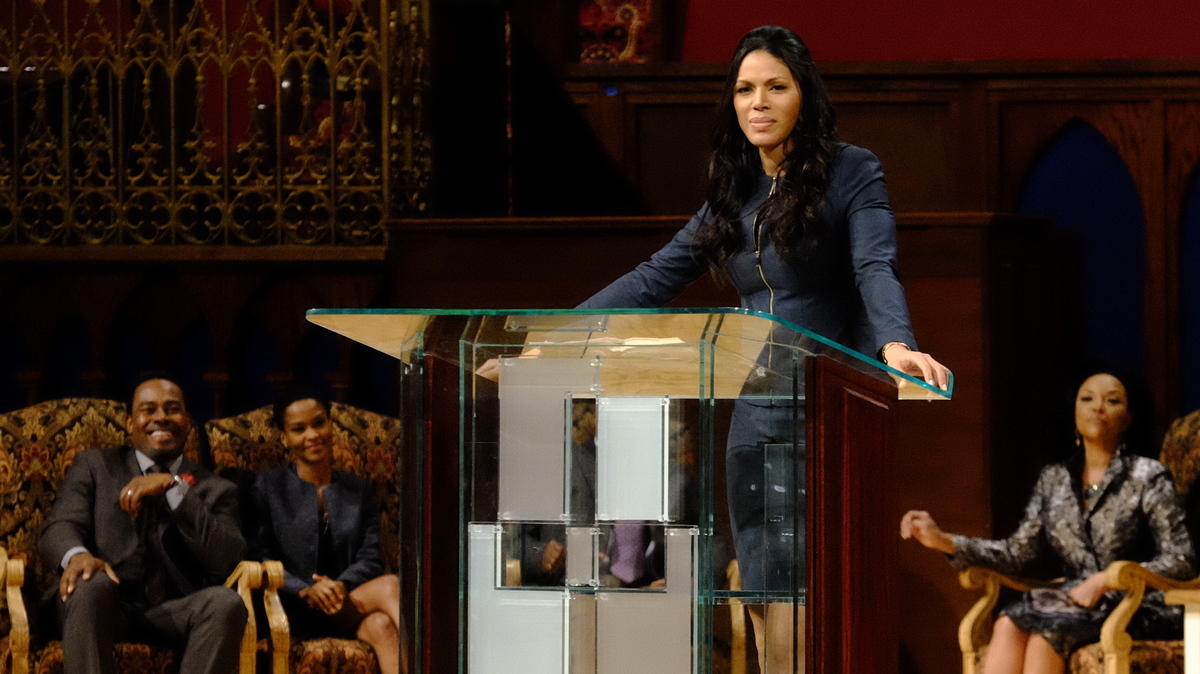 Merle Dandridge stars as Grace Greenleaf, who returns to her family's megachurch after 20 years away — and gets caught up in a swirl of secrets and lies.

There is a moment, a little ways into tonight's first episode of the Oprah Winfrey Network's new drama, Greenleaf, which sums up all the things that work — and don't — in this ambitious nighttime soap.

Merle Dandridge plays the show's heroine, Grace Greenleaf. Her father, Bishop James Greenleaf, and mother, Lady Mae Greenleaf, founded a powerful, predominantly black megachurch in Memphis, Tenn., where she preached as a child. After 20 years away from home, she has come back — for the funeral of her sister Faith, who killed herself.

At a tense family dinner, Grace's sister-in-law insults her, and her sister Charity (Deborah Joy Winans) rejects her as matriarch Lady Mae eggs them on. Grace is clearly uncomfortable sitting next to her mother's brother — known as Uncle Mac, he is played with mustache-twirling glee by Gregory Alan Williams. And when her mother laments losing a daughter, Grace loses her composure.

"You didn't lose my sister, Momma, you gave her away," she shouts, turning toward Uncle Mac. "You let him sit right here at the table next to you?"

It's obvious, in that moment, what Uncle Mac is guilty of, and why Faith decided to end her life.

Themes like these are woven throughout Greenleaf, issues that have roiled the black family and the black church for decades but have rarely been explored in a TV melodrama. Besides the cover-up of Uncle Mac's predatory ways, there's a philandering junior pastor (cheating with the bishop's secretary, who is white), an in-law who might be a gay man on the down-low, concerns about financial improprieties and a focus on material wealth that looks downright unseemly.

OWN has corralled some high-quality acting talent for this enterprise, including voice-over narration king Keith David as the bishop and Emmy winner Lynn Whitfield as Lady Mae. And Winfrey herself returns to TV acting for her first regular series dramatic role in two decades, playing Lady Mae's sister, a bar owner who works with Grace to take on Uncle Mac.

But these meaty issues and ace performers are undermined by clumsy writing and plotlines you can see coming miles away.

After the dinnertime scene with Uncle Mac, you know Grace will find a way to stick around and take him on, with help from Winfrey's Aunt Mavis. Likewise, you know there's something fishy about how Grace's brother-in-law is looking at the handsome young man who runs the charity using the church's facilities for an event.

There are some troubling missteps here, including the depiction of Greenleaf's two most prominent white characters as extramarital temptations for members of the bishop's family. And as hyped as Winfrey's role is, she only surfaces for a handful of scenes in the first three episodes.

Oprah Hopes Her Midas Touch Gilds Her OWN Series, 'Belief'

This feels a bit like OWN learning a lesson taught by Tyler Perry. The prolific actor/producer/director has created four scripted shows for Winfrey's cable channel that regularly score top ratings for OWN, especially among African-American households.

Greenleaf offers the same mix of aspirational black characters, church-tinged melodrama and African-American issues that has made Perry's work so successful, particularly among black female viewers. So it's small wonder OWN would craft this series as a way to up the ante a bit, without losing sight of the themes and techniques that have made Perry's shows such a hit.

Back when OWN first debuted in 2011, the strategy was a little different. Winfrey was hailed as the Queen of All Media, coming off the success of her massive syndicated talk show. So the cable channel developed in her name began with a focus on that show's target audience: middle-aged white women.

There were unscripted shows with Shania Twain, Sarah Ferguson and Ryan and Tatum O'Neil, a talk show with Rosie O'Donnell, a show with Winfrey proteges like Dr. Phil and Suze Orman. And it floundered.

Winfrey corrected things with two big moves. She put more of herself on the channel, with a new interview show, and refocused the channel on black female viewers, with unscripted shows like Welcome to Sweetie Pie's, a series with motivational guru Iyanla Vanzant and Perry's scripted programs, which draw some of the channel's highest ratings.

Here's hoping Greenleaf is part of a march toward real quality that will eventually see OWN offer scripted programming about women of color that transcends the Tyler Perry soap opera model.

Black female viewers are the secret element of success for many TV shows. They watch more TV, proportionally, than their white counterparts and they make most of the purchasing decisions for their households, according to data from Nielsen. OWN's turn toward them made sense in all sorts of ways, particularly because they remain a viewership group starved for programming about them that feels authentic.

OWN has more scripted projects in the pipeline, including Queen Sugar, a series with Selma director Ava DuVernay; and a miniseries about race riots in Oklahoma in 1921.

So Greenleaf makes a certain kind of sense as the latest step in a plan to boost scripted series on OWN. And it's likely to be a hit with fans of Perry's dramas, despite its glaring flaws.

Here's hoping Greenleaf is part of a march toward real quality that will eventually see OWN offer scripted programming about women of color that transcends the Tyler Perry soap opera model.

Because if anyone can make it happen, surely the Queen of All Media can.